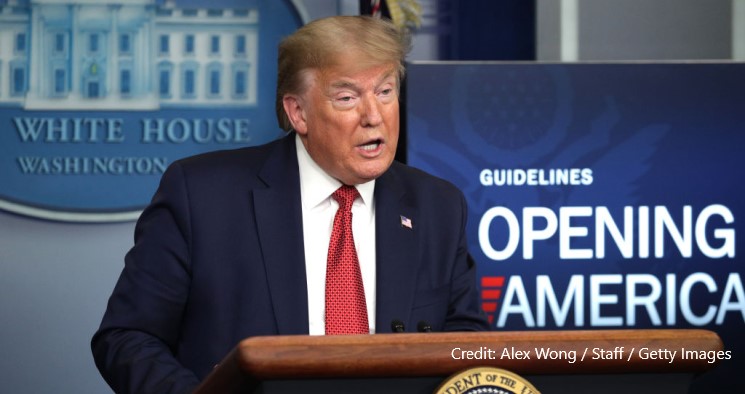 Politicians tend to interpret events to fit pre-existing world views and agendas. Responses to the coronavirus are no different. Within the western liberal consensus, these events affirm the need for deep international cooperation.

But for anti-globalists on the radical right the crisis provides an opportunity to discredit liberal democracy, global governance, open economies and open borders, and international institutions, including the EU.

Donald Trump has carried anti-globalism into the most powerful office in the world, and there are parties in many European countries that share his instincts.

One of their overriding principles is the sovereignty of the nation state. They reject what they see as foreign meddling in their national affairs, and oppose wasting national resources on other countries’ problems.

Populism often comes into play, too. They perceive global elites acting against the will of the people and eroding local identities. As for the EU, it is the archetypal project of international elites.

They deplore its mission to blur sovereignty and remove borders, and resist all attempts to transfer power from national capitals to ‘Brussels bureaucrats’.

Some on the radical right, in their passion to discredit global governance, cast doubt on anything that justifies it. For liberals, climate change is the ultimate symbol of humanity’s shared fate and the limits of national sovereignty.

No wonder, then, that some anti-globalists respond by claiming the whole issue is overblown liberal hysteria.

How does the coronavirus play into this clash? For mainstream liberals, it further demonstrates that with greater interconnectedness, global challenges demand deeper global cooperation.

Only international scientific cooperation, free flow of information, and coordinated policies can tackle the health crisis and support the world’s economy.

On a more philosophical level, this crisis is taken to underline our common humanity, and the relative insignificance of national or cultural differences.

How radical right anti-globalists respond depends partly on whether they are in power or in opposition.

In the case of Donald Trump, the most prominent anti-globalist in power, his initially dismissive attitude echoed his attitude towards climate change. President Bolsonoro in Brazil similarly charged the global media with exaggeration.

But whilst climate change is usually relatively intangible, and lends itself to denial, the coronavirus is different. Daily death counts can’t be so easily dismissed as liberal hysteria.

Trump’s favoured tactic when things go wrong is blame others, especially foreigners. In this crisis the obvious target was China. Hence the failure of G7 foreign ministers to agree a statement on the crisis because the US insisted on calling it the ‘Wuhan virus’.

A third interesting element of Trump’s response relates to medical research, with reports that his administration tried to buy a German company making progress on a vaccine – not so much an international scientific endeavour as an international competition for resources.

In Europe, the crisis has made it easier for Hungary’s populist radical right prime minister Viktor Orbán to wave away the concerns of those interfering, Brussels bureaucrats.

And while he did not engage in denial, he did seize an opportunity to centralise his increasingly authoritarian power and slam the door even harder shut on asylum seekers accused by his government of spreading the virus.

Meanwhile, for European radical right nationalists in opposition, the crisis is an opportunity to attack mainstream rivals, not only on domestic failures in health and social care, and in crisis management, but also on international politics.

For Marine Le Pen in France or Matteo Salvini in Italy, globalization is part of the problem. Open borders, they say, have allowed the virus to spread.

This is also an opportunity to shift blame to the EU itself. In Italy – with its major outbreak and fragile economy – eurosceptics have found fertile ground when claiming that the EU has been ineffective, lacking solidarity when it was most needed.

In Germany it is the same story in reverse. The radical right Alternative for Germany party (AfD) frames this crisis as another example of hard-working Germans being asked to prop up weaker and more poorly managed neighbours, as with the eurozone and migration crises that carried AfD into the Bundestag.

Any long-term unemployment and other economic challenges will offer further opportunities for anti-establishment parties down the road. So will anti-globalist thinking be strengthened?

Some seasoned analysts in the liberal camp are pessimistic, expecting an acceleration of existing trends away from global cooperation – not least because of the absence of the leadership from the US.

But the world is complicated and unpredictable. The US election will be a significant indicator.

If Biden beats Trump, it may slow the US drift towards isolationism. A Trump defeat may also be seen as judgement not only on his response to the coronavirus but the political world-view behind it.

It might also give politicians elsewhere who share Trump’s anti-globalism pause for thought. If Trump wins, of course, it could reinforce anti-globalist views not just in the US, but internationally, including in Europe.

The EU is a champion of international cooperation and integration. It has proven more resilient than some expected through successive crises, including Brexit.

But its credibility and effectiveness is being seriously questioned. EU finance ministers have now agreed significant financial support measures, but there is a long way to go to weather this storm.

One thing, though, is for sure: the coronavirus crisis is just as likely to intensify the pre-existing clash of world-views between internationalists and anti-globablists as it is to resolve it.

By Dr. Toby Greene, Marie Skłodowska-Curie Research Fellow in the School of Politics and International Relations at Queen Mary University of London.