Covid-19 and the ‘rally-round-the flag’ effect 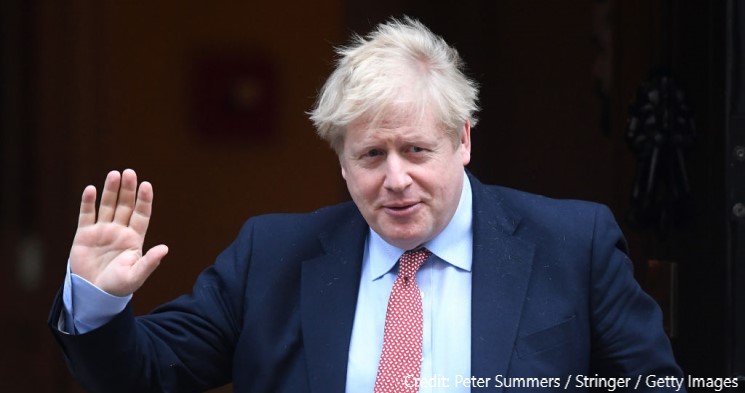 UK Prime Minister Boris Johnson’s satisfaction ratings, tracked by pollsters Ipsos MORI, have risen significantly. By mid-March they had improved to 52% – an increase of 5-points from 47% at the start of February and up 16-points on his ratings back in early December just before the general election (36%). Number Cruncher polling more recently found that Johnson’s satisfaction ratings had risen to 72%.

But Boris Johnson is by no means alone. At a time of unprecedented crisis, and with only one or two exceptions, leaders the world over are experiencing rising popularity.

Measured by Gallup, US President Donald Trump’s job ratings have soared to their highest ever point, with 49% of adults approving of his performance and 45% disapproving.

French President Emmanuel Macron has seen an even larger increase in his satisfaction rating than his counterparts – rising to 51%, some 13-points up since last month, and his highest since January 2018.

German Chancellor Angela Merkel has seen her approval rise to a meteoric 79%, up 11-points since early March – a remarkable figure for a leader who has been in power for well over a decade.

The approval rating of Giuseppe Conte, Prime Minister of Italy, the country worst hit so far in terms of deaths, has hit 71% – an incredible 27-points higher than in February.

More broadly, polling firm Morning Consult reports that approval has risen in their daily tracker survey for a number of world leaders since the World Health Organisation (WHO) declared a pandemic. The PMs of Canada and Australia, Justin Trudeau and Scott Morrison, have similarly seen their popularity surge in recent days.

Indeed, virtually the only leader to have seen their ratings markedly decline is Brazil’s populist far right president, Jair Bolsonaro, with the public seemingly unimpressed by his Coronavirus-denialism. 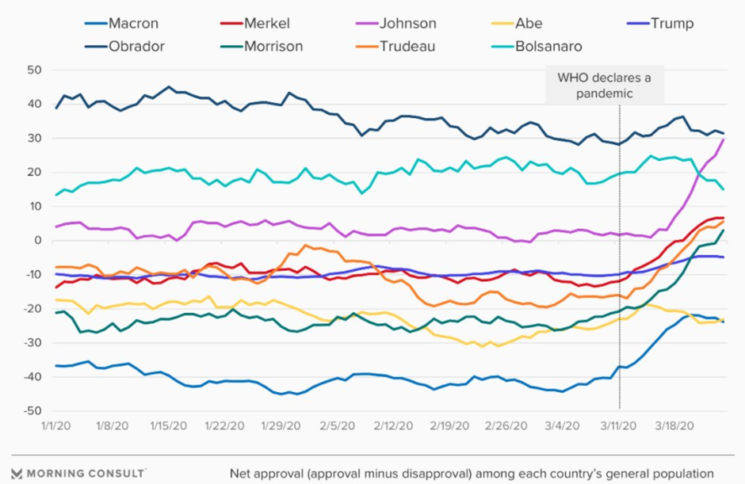 What is interesting, however, is that this widespread rise in popularity appears to have little to do with actual performance in handling the crisis so far.

President Trump, for instance, has consistently downplayed the virus – describing criticism of the administration’s response as a ‘hoax’ – and failed to roll out testing for those infected, on top of having previously disbanded the National Security Taskforce responsible for pandemic preparations (in 2018).

Closer to home, the UK government’s initial reaction to the crisis has been criticised as too slow and confused in its messaging, before appearing to U-turn into ordering a lockdown.

So what explains the fact that their popularity seems to be rising regardless?

Most obviously what we seem to be seeing is the ‘rally-round-the-flag’ effect originally proposed by American political scientist John Mueller. The characteristics that Mueller linked with these surges of popular support for incumbents were inspired by Cold War events but have substantial resonance with the Covid-19 outbreak.

For a rally-round-the-flag to occur, the event had to be international, involve the country and its leader directly, and be ‘specific, dramatic, and sharply focused’. The global significance of the Covid-19 pandemic – and the fact that the fight against it can (and has been) likened to a war – fits perfectly with this definition.

In all countries leaders have been a central figure in the government response. The existential threat posed by the virus, combined with radical restrictions on movement that have been implemented, growing pressure on health services and severe shocks to the economy, all are features consistent with the dramatic and sharply-focused events noted by Mueller.

As to what drives this rally-round-the-flag at times of national crisis, one of the traditional explanations was that patriotic feelings led the public to view the incumbent as the focus of national unity, leading to greater support as citizens set aside their partisan biases.

Others have argued that rallies depend on opposition politicians temporarily laying aside their partisan interests and on increased levels of media coverage, thereby influencing how the public perceive leaders. Another view is that when feeling vulnerable and under threat, citizens put their trust in political leaders and authorities to protect them.

Whichever explanation works best, however, a big question remains: how long is any rise in popularity for our current crop of leaders likely to last? To address it we can, perhaps, look to one fairly recent precedent.

The last rally-round-the-flag with similar global ramifications as Covid-19 was that following the 9/11 attacks on America. In the aftermath, US President George W. Bush’s approval rating jumped nearly 40-points to 90%, the highest ever recorded for a US president – and well above any of the ratings achieved by world leaders in the midst of the Covid-19 pandemic.

The 9/11 rally lasted longer than any other in the history of US polling. More than a year later Bush’s approval rating was 68%, still nearly 20-points higher than his rating at the time of the attacks.

Nothing, however, lasts forever. Bush’s popularity declined steadily throughout his first and second terms, and in the end only Presidents Truman and Nixon left the White House with lower ratings.

It is impossible to say, then, precisely when the Covid-19 rally-round-the-flag effect might start to fade and then finally end. Clearly, the human and economic effects of the outbreak will affect how leaders are judged, as will the response of governments. As events unravel and other political dynamics take hold, voters will reassess and refocus.

As people are finally able to move beyond the pandemic, political gravity is bound to kick in: what goes up must come down.

Where that leaves individual leaders will depend in large part not just on how they are eventually seen to have handled the current crisis but on how they handle other issues whose importance to voters will gradually grow again. That, of course, and precisely when they are due to face re-election.

By Will Jennings, Professor of Political Science and Public Policy, University of Southampton.