Covid-19: how is the EU responding? 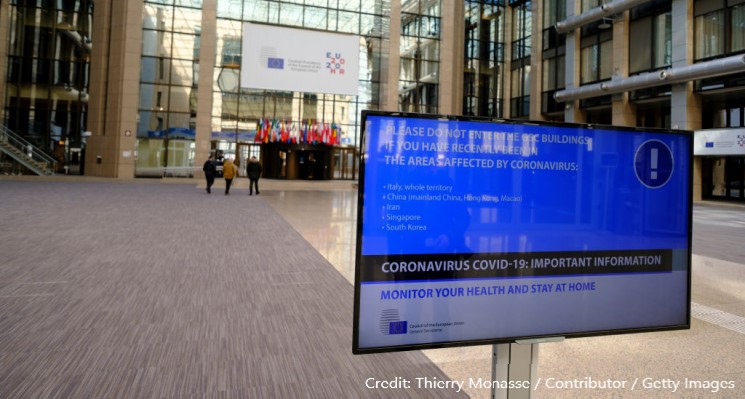 The coronavirus (Covid-19) outbreak has brought to the fore many of the ghosts of previous EU crises: member states acting unilaterally without consultation, little to no coordination between them and an apparent lack of solidarity with those worst-affected countries.

It is important to emphasise that this outbreak is predominantly a member state problem to solve. The EU plays only a supporting role in health, with competence retained by member states. The onus, therefore, is on member states to come up with an effective collective response and take difficult decisions about where to pool resources and risk.

Nevertheless, the EU institutions have taken a range of measures.

On health, the European Commission has co-ordinated the joint procurement of personal protective equipment for medical staff, in which 25 member states participated—Finland and Poland, as well as the UK did not take part.

It also implemented, early in the crisis, a six-week export restriction for personal protective equipment for medical staff outside the EU, excluding European Free Trade Association countries and the UK.

It announced, subject to member state approval for funding, the setting up of a stockpiling system for medical equipment such as ventilators. The system relies entirely on member states volunteering to host, and partly shoulder the costs, of such supplies. It remains to be seen whether member states with so many other pressing priorities decide to use this mechanism.

The Commission has also made EU harmonised standards for particular medical supplies and equipment freely available to facilitate the quick manufacture and approval of such goods by all interested companies.

The European Centre for Disease Prevention and Control—the EU’s disease prevention agency—is providing authoritative information and analysis on the development of Covid-19 globally and measures that can be taken to combat it.

The EU also has an online Early Warning and Response System, linking EU and national health authorities, and allowing them to exchange information and coordinate measures. The effectiveness of the system is unclear, however, as in 2017 (latest data) more than a third of messages posted on the system were considered out of scope.

Finally, the EU has a forum—the Health Security Committee—to coordinate with all relevant EU agencies as well as global partners, such as the World Health Organisation, although it also meets in an EU-only format. The committee met on 13 March, with a UK representative in attendance for part of the meeting, and parties exchanged information, strategies and measures taken.

Part of the Commission’s role in crisis management is to clarify, quickly, what measures member states can take within the bounds of EU law. State aid rules are a case in point.

On 19 March, the Commission published a new, temporary framework to guide member states, alongside concrete steps they could take, such as providing wage subsidies and tax breaks, without falling foul of EU rules.

The Commission has also quickly approved many of the measures member states have notified. This has both removed a barrier to national action by loosening the rules temporarily and made it easier for member states to implement policy by providing clear guidance on what is compatible with EU law.

The Commission also drove a move to trigger the escape clause in EU fiscal rules, since approved by EU finance ministers, to allow member states to support businesses and consumers without such interventions being counted in assessments of their fiscal sustainability.

After the ECB president, Christine Lagarde, mis-spoke on 12 March, raising uncertainty about the bank’s willingness to support weaker eurozone economies, the bank announced a €750bn bond-buying scheme, increasing potential ECB purchases to €1.1trn for the rest of this year—its highest ever level. This appears to have calmed financial markets and has reduced eurozone countries’ borrowing costs.

The European Investment Bank has also proposed a €40bn financing package, including loan guarantees and support for small businesses, which needs to be finalised with the Commission.

Eurozone finance ministers have yet to take any collective, co-ordinated action. The group’s president, Mario Centeno, said following their latest meeting on 24 March that ‘we have started a debate on additional forms of support’.

However, he indicated that there was broad support for the use of the European Stability Mechanism to provide additional credit to eurozone member states if needed, although this has yet to be agreed.

EU leaders also failed to reach agreement on 26 March on any additional support. Prior to the meeting, nine eurozone member states, including France, Italy and Spain, called for a commitment to the joint issuance of debt through so-called ‘coronabonds’.

However, this faced resistance from the likes of Germany and the Netherlands, who want to use existing mechanisms and reject the possibility of the EU becoming what Dutch prime minister Mark Rutte has called ‘a transfer Union’. Leaders have now returned the issue to eurozone finance ministers, who have two weeks to agree a solution.

The EU has also taken steps to ensure the continued movement of necessary people and goods both within the EU and from outside.

The Commission has provided guidance to attempt some co-ordination of border restrictions among member states, both for goods and people. This is to ensure that a common set of requirements apply at each border, reducing the administrative burden, checks and waiting times.

Most member states have implemented some restrictions, in line with Schengen rules which allow members of the Schengen area to do so for reasons public health.

EU leaders have met by videoconference since the crisis started. At their 17 March meeting they approved a 30-day suspension of all non-essential travel to the EU by non-EU citizens, with a number of exceptions, including UK citizens.

In aviation, the Commission has proposed relaxing rules on landing and take-off slot usage by airlines. Ordinarily, airlines must use 80% of their allocated slots or risk losing them.

This forces airlines to run so-called ‘ghost flights’ with few or no passengers, producing unnecessary costs and pollution. The European Parliament approved the measure on 26 March, but it still requires Council agreement.

All in all, this demonstrates substantial action by the EU institutions, even in an area where they play a relatively modest role. Partly, this is because of the wider economic implications of the virus, which touches upon policies—such as mobility and trade—where the EU does have more scope to intervene.

Most of what the EU has done, though, has been supportive. It will ultimately be down to member states to improve their coordination and take more decisive collective action.