Covid-19: the struggle to agree an EU response 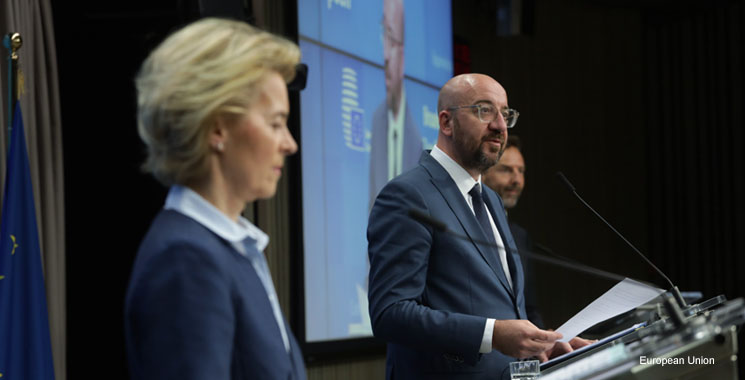 Thud, click, rattle, rattle, clank: the sound of a can being kicked down the road is all too familiar in Brussels.

Another crunch meeting of the European Council on 23 April, informal and by video conference, again failed to approve a comprehensive EU level response to the intensifying economic crisis induced by Covid-19. But there has been progress: the European Commission has now been invited ‘to analyse the exact needs and to urgently come up with a proposal that is commensurate with the challenge we are facing’.

The basis for this solution is the roadmap for recovery, put in front of the European Council by its president, Charles Michel and his counterpart from the European Commission, Ursula von der Leyen. It sets out principles for a strategic response, redolent with warm-sounding terms, printed in bold font, including: ‘solidarity’; ‘flexible and agile’; ‘inclusive and co-owned’; and ‘values and rights’.

It calls for a ‘Marshall-Plan type investment effort to fuel the recovery and modernise the economy’ and argues that the ‘investment effort should be defined as part of a comprehensive recovery package with the EU budget at its heart’. Close observers of Brussels politics will notice familiar terms from the policy playbook, notably deepening the single market, the ‘green transition’ and investing in the digital economy.

A more intriguing segment of the document emphasises the term ‘strategic autonomy of the EU’. It refers to the need to rethink supply chains and over-dependency on third countries: China beware. It also mentions ‘effective screening of foreign direct investment’, echoing a component of Germany’s extensive fiscal package aimed at shielding companies brought low by the crisis from hostile takeover. Is this nascent protectionism?

What to expect and by when

In addition to the request to the Commission for an action plan, expected in early May, the European Council agreed the proposals from the Eurogroup for loans to support households, companies and states, up to a total of €540 billion, asking for it ‘to be operational by 1 June 2020’.

As with similar exercises during the sovereign debt crisis aimed at a genuine economic and monetary union (the 2012 four presidents report) and completing economic and monetary union (the 2015 five presidents report), the action plan will provide details of measures and their timetable. The ensuing actions fell short of what had been proposed in both earlier cases, although in some areas (such as banking union) undeniable advances were achieved. This time needs to be different…

A recovery fund had been put forward by the Eurogroup as part of the package of measures, reviewed previously, agreed on 14 April, though only after difficult negotiations. But its scale and other details were sketchy; they still are, although the EU’s leaders do now appear to be coalescing around the proposition of linking the new fund to the EU’s multi-annual budget.

What seems to have been decisively rejected, despite the demands of several member states – however it might be dressed-up, for example as ‘coronabonds’ – is mutualisation of debt.

Pinning a response on the EU budget will not be easy. A settlement of the next multi-annual financial framework (MFF), to run from 2021 to 2027, is long overdue. Prior to the Covid-19 crisis, the EU had been gravitating towards a deal around a headline total of about 1.07 percent of EU GDP. Attempts to settle it two months ago were unsuccessful and the expectation had been that it would have to wait until late summer under the German Presidency.

Re-opening the negotiations will take time, and will also re-open the familiar three-way dispute between net contributors, recipients of ‘old’ EU spending and advocates of ‘new’ EU spending.

The roadmap, while extolling the benefits of ‘investing massively in the Green and Digital transitions’, insists this must be ‘alongside other policies such as cohesion and the common agricultural policy’. Fine, but is it realistic when national budgets everywhere are under rapidly increasing strain?

The European Council is, manifestly, aware of the need for common action and the dangers of being seen to do too little, too late, and being too caught up in stances rendered obsolete by the severity of the crisis. But EU leaders will need to make some tough choices and some may have to abandon long-held positions.

First, how big a ‘bazooka’ do they want the recovery fund to be? In the US, the latest announcement of a further $500 billion for rescuing small firms takes the aggregate package from the federal government to some $3 trillion.

Although comparing the EU level of the state with Washington is inappropriate and potentially misleading, the range of figures being mentioned for these new EU initiatives is vast, some talking of €1 trillion, others of more than double.

The second issue is how the Recovery Fund should function. A likely model is the European Fund for Strategic Investment (the Juncker Plan, now being re-branded as InvestEU). Guarantees from the EU budget enable investors to borrow more than they would be able to raise themselves, with a leverage ratio of 1:15.

Then there is the matter of whether more of the recovery effort should be in the form of grants to member states, instead of loans which – especially in the case of heavily-indebted countries like Italy – exacerbate fiscal vulnerabilities. Divisions on this were evident at the European Council with Emmanuel Macron, who favours more EU spending, saying ‘on that there is no consensus today’.

A fourth issue is whether a new role for the EU budget should be temporary or permanent. In her press conference following the EUCO meeting, von der Leyen suggested raising the permitted ceiling for EU spending to 2 percent of GDP, up from a current maximum of 1.2 percent and effectively double EU spending in recent years because of unused margins. She suggested this be only for two or three years, but it will be looked at with alarm in several national capitals.

Where does all this leave the EU? Yes, it is gravitating towards a more extensive response to the economic crisis, but national sensitivities continue to constrain its ability to act. As always with MFF negotiations, some have to concede before a deal can be reached. Who will it be?