Covid-19’s threat to the EU 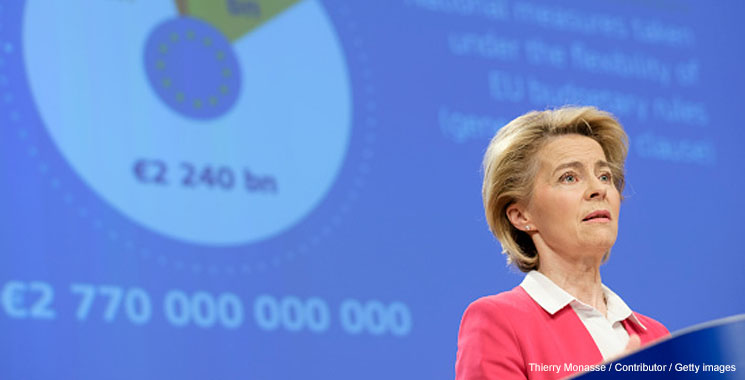 ‘Eurobonds are on the table,’ tweeted Italy’s Finance Minister. ‘Eurobonds is a thing I wasn’t OK with, I am not OK with and I will never be OK with,’ declared his Dutch counterpart. The Eurogroup meeting of eurozone finance ministers broke up unable to disguise profound differences over how to deal with the economic fallout of the pandemic.

The subsequent virtual meeting of their bosses similarly failed to agree on the details of the EU’s recovery fund.

Covid-19 could have proved the case for ‘more Europe’. Instead, it has exacerbated longstanding structural problems that risk trapping the EU in the worst of all worlds – bearing responsibility for decisions over which it enjoys little or no authority.

That the Union has had a difficult crisis is in part down to a number of preventable communications cock-ups. #Lagarde was trending in Italy following her remark that the European Central Bank was ‘not here to close spreads’.

The Commission itself did not put out a statement on coronavirus until 10 March, by which time Italy was in the first day of full lockdown. It was subsequently forced by offended member states to cancel publication of a ‘roadmap’ to end lockdown.

This is not to say the EU has failed to respond at all. The ECB launched a €750 billion Pandemic Emergency Purchase Programme; national bans on exports of medical equipment were eventually lifted; Brussels has suspended its rules on budget deficits and relaxed those on state aid.

And the Eurogroup agreed revised pandemic credit lines from the European Stability Mechanism, allowing states to spend up to two percent of their GDP on costs relating to the health crisis with no conditions attached.

But there is only so much that the EU can do when it comes to coordinating member states which, when forced to choose between protecting their citizens and European solidarity, have plumped repeatedly (and understandably) for the former.

Unilateral decisions closed national borders leading to a an 80km queue at the Brenner Pass between Austria and Italy.

When Rome asked other member states for help in supplying masks through the EU’s Civil Protection Mechanism, it received no response for several weeks.

Germany initially banned the export of face masks. Meanwhile France requisitioned all stocks of protective masks, and seized around six million masks from Swedish company Mölnlycke, all contracted for by other member states including Italy and Spain.

And member states are also the obstacle when it comes to economic responses. EU actions so far have been far from sufficient  to deal with the fallout of the crisis.

Yet mutualised debt issuance is something the so-called ‘frugal states’ vociferously oppose. The Dutch, Austrians and Finns are most strident in their opposition, fearing the weakening of fiscal discipline. The virtual European Council merely kicked the can of the recovery fund down the road.

The political dangers inherent in all this are clear. Italy went into the crisis with debt of 135% of GDP, and hence less fiscal headroom than most of its partners.

Yet Italian finance minister Roberto Gulatieri has stated that ‘nobody will lose their job’ because of the virus. Should that promise not be delivered, someone will have to carry the can.

Already, polls conducted by news agency Dire on 12-13 March suggested that 88% of Italians felt that Europe was failing to support Italy in the crisis while 67% viewed EU membership as a disadvantage (up from 47% in November 2018).

There is an obvious danger, as Luigi Scazzieri has argued, that Italians might elect an EU-phobic government under Salvini in 2023, or earlier.

Yet measures which might reduce the appeal of populism in one member state could strengthen it elsewhere. The Dutch, Finns and Germans all have their own problems with populists.

For them the issue is not a lack of solidarity among member states but free riding by the supposedly free-spending south. More generous mutual provision with few conditions attached might attenuate the populist challenge in Italy but risks worsening it elsewhere.

There are two reasons for the Union’s current difficulties. First, conflicting policy priorities born out of fundamental political, economic and social differences between member states.

Second, the EU finds itself trapped in a distinctly unstable equilibrium. Lacking the tools necessary to deal with a crisis on this scale, it nevertheless gives the appearance of having responsibility for a decisions of direct relevance to Europe’s response to the pandemic: take von der Leyen’s reference to the EU budget – making up one percent of EU GDP – as the ‘mothership’ of the recovery.

When traffic stalls at, or goods do not flow over borders, it is easy to blame Brussels. When some member states are left floundering in the face of an economic shock, the Union again makes an easy target.

Difficult decisions must be made if this mess is to be ended. The EU could be empowered to deal with the kinds issues over which governments have traditionally sought to monopolise control – with greater coordination over the ending of lockdown and more meaningful economic collaboration to confront the fallout of the crisis.

Alternatively, member states should make it clear that they carry responsibility for policies they largely determine.

It might be argued that the height of a crisis, when governments fear the political backlash from unpopular decisions seen as threatening physical and economic health at home is far from an ideal time to be making such choices.

Yet most governments have seen a significant boost in their popularity as a result of the crisis. What better time to start being honest with their electorates?

The lessons of the eurozone and migration crises are clear: muddling through allows populist forces to either claim victory or attack inadequate EU responses (or both).

If decisions are avoided, or fudged yet again, the EU will continue to shoulder responsibility for actions and outcomes over which it has little or no control.

And this will only strengthen and embolden populists who will be the ultimate beneficiaries of a chaotic finger-pointing outcome.

By Professor Anand Menon, Director of The UK in a Changing Europe.