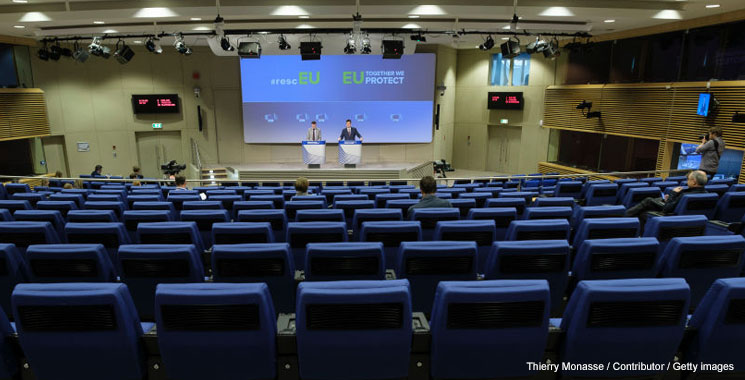 The EU has been criticised during the coronavirus outbreak for an apparent lack of solidarity between member states and poor co-ordination in its response.

However, across a broad range of policies, co-ordination has been about as effective as we could expect given the circumstances.

While it is true, especially when it comes to common fiscal mechanisms, that there have been high-profile co-ordination failures, an excessive focus on late night summitry misses a lot of what has happened.

We saw at the start of the crisis the mutually damaging impact of unilateral measures. Germany, for instance, placed restrictions on the export of protective medical equipment, including to other EU countries, potentially limiting supplies elsewhere.

Poland closed its borders with little warning, disrupting supply chains and leaving thousands of workers stranded at its borders.

Gradually, however, a more co-ordinated EU response has developed.

Much was made of Russian and Chinese aid sent to Italy in the early days of the crisis. A demonstration, as some saw it, of who Italy’s true friends were in a time of need.

But less remarked upon—though no less important—has been the aid forthcoming from EU partners.

Medical teams were sent from Romania and Poland to northern Italy. Dozens of Italian (and French) patients were taken in by Germany (and Austria), with Germany providing further intensive care beds and flying patients out of Italy itself.

France has donated a million masks to Italy, and Austria 1.5 million. Germany has provided 300 ventilators, and the Czech Republic delivered 10,000 protective suits to both Italy and Spain.

Much of this support came via the EU’s civil protection mechanism, a co-ordinated pool of resources that can be called upon during crises. As this demonstrates, the response may have been ad hoc, but it has been far from absent.

Health is predominantly a member state responsibility, and often that of lower levels of government. The EU’s role, as the treaties say, is to ‘complement national policies’ and that, by and large, is what it has done.

In response to some of the delays that occurred because of sudden border closures, most notably but not exclusively in Poland, the Commission quickly produced guidance on common border procedures, limiting any checks, including for health reasons, to a maximum of 15 minutes.

Over 500,000 EU citizens have been repatriated since the start of the crisis, a large number on flights organised by countries other than their home nation.

Just over 40,000 were returned through the EU’s civil protection mechanism, as well as almost 2,000 British citizens.

But there do remain gaps. For instance, a number of member states, including France and Italy, did not notify the Commission about movement restrictions along some of their land borders.

These communication breakdowns have to be tightened up.

There is also variation in the restrictions imposed on travel. Most, though not all—Denmark is a notable outlier—member states have introduced some restrictions on movement into and within their countries.

The Commission has tried to co-ordinate member states’ responses by proposing common policies restricting external travel into the EU.

Plus, some variation is justified given the different impacts that the virus has had. As of 22 April, for instance, Finland had experienced just 26 deaths per million citizens, markedly lower than Spain with 455 deaths per million. The scale of the crisis in these countries is clearly not comparable.

Levels of preparation also differed. Much of the management of the outbreak comes down to the capacity of healthcare systems to deal with it, especially critical care capacity.

Prior to the outbreak, Germany had more than twice the critical care capacity of Sweden, for example. That has inevitably led to different approaches.

The regulatory response has also been reasonably effective, albeit sluggish where approval is needed by both the Council and the Parliament.

Where the Commission has had the competence to act alone, it has done so quickly.

It rapidly produced updated, temporary rules on state aid, offering crucial timely guidance to governments about what economic interventions they could take within EU rules.

Since then, the Commission has approved 52 different measures taken by member states, as well as by the UK, which remains subject to these rules during the transition period.

There have been other examples where regulatory changes were important. The Commission proposed triggering the break clause in EU fiscal rules to allow member states responses not to be counted in such assessments. This was later approved by EU finance ministers.

More sector-specific measures have been taken as well. In aviation, the rules on take-off and landing slots, where airlines ordinarily have to use them or lose them, were temporarily suspended to prevent so-called ‘ghost flights’ with few or no passengers.

The new medical devices regulation has been delayed by a year to alleviate any additional burdens on accessing medical equipment.

The elephant in the room, of course, is the fraught question of economic co-ordination.

That has already been subject of much debate and analysis, and there is not space to do justice to it here.

But as tempting as it is to lament the apparent lack of mutual understanding between member states on some economic measures, it is far from the entire picture.

Much important co-ordination is taking place, although it tends to fly under the radar of media coverage.

Ultimately, responses to crises will always be disjointed and ad hoc. That is the nature of responding to unprecedented circumstances.

We should not expect EU leaders to come up with a comprehensive response on the run while they are trying to mitigate the immediate impacts.

Once the situation stabilises, deeper cooperation will be crucial for the long-term management of this crisis and of pandemics more widely. New structures will inevitably be put in place.

But criticisms of a disjointed EU response can miss a lot that has happened. And much of it has been about as effective as we could expect.