Crunching the parliamentary numbers on the withdrawal bill 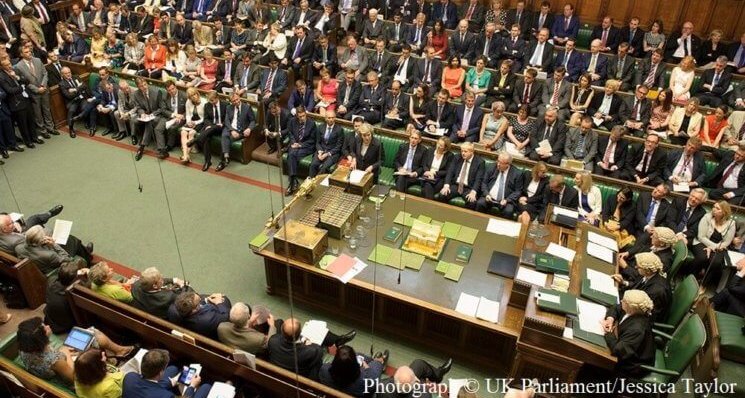 The Prime Minister argued, on the triggering of a snap general election, that the complexity of Brexit, and the acceptance of her vision of it, demanded a bigger parliamentary majority.

The failure to achieve this majority means that May’s problems, above all, are parliamentary. The government’s numerical weakness limits the ability to change personnel or policy direction. This problem is about to be brought into sharp focus as the centrepiece of the government’s legislative programme for Brexit, the EU Withdrawal Bill, returns to parliament this week.

The Committee stage of the Withdrawal Bill, where MPs propose amendments, and the details of parliamentary bills are thrashed out, will take place today and tomorrow. For Tory MPs in favour either of remaining in the EU, or of a softer kind of Brexit than the prime minister desires, this is an opportunity.

By the final count, a flurry of 454 Amendments had been tabled. But the key one to watch is Amendment 7 – tabled and supported by ten Tory MPs, headed by the former attorney-general, Dominic Grieve.

Europhiles need to rally around causes that are important enough to influence the government’s negotiating direction, whilst also achieving maximum support. In this amendment they have found an issue worth arguing about, and one on which they stand a fighting chance of winning.

David Davis’ vague announcement last night, that the final deal will be voted on through an act of parliament, indicated that the government is concerned they may lose the vote on Amendment 7.

These Conservative MPs, supported by the opposition parties, argue their amendment is about whether they will get a real say at the end of the Article 50 process. Pro-EU Tories fear parliament will be faced with a “deal or no deal” vote. This would, in all likelihood, be a Hobson’s choice between a rocky transition, and a steep cliff-edge down to a very hard place.

Making this final vote ‘meaningful’ is, in practice, about ensuring the debate would be on the content of the deal the government has agreed, rather than the principle of enacting Brexit. It would also mean parliament having the ability to send the government back to the negotiating table, so it would have to take place in October 2018 at the latest. This is why, despite the government offering their interpretation of a “meaningful vote”, Dominic Grieve has, at the time of writing, refused to withdraw his amendment.

So how far are the rebels willing to go? Nicky Morgan has warned the government that when it comes to securing a “meaningful vote”, Tory rebels are “deadly serious”. This is a tacit admission that, until now, their bite had not matched the bark. But it prompts two critical questions: how many of them are there, and how serious are they?

The government’s working majority, given DUP support, is 13. Therefore, in principle, the magic number is seven Tory rebels for an amendment to pass. And ten have already nailed their colours to the mast and signed this amendment.

But it’s not that simple. Ardent pro-Brexit Labour MPs could render any pro-EU Tory rebellion moot. Seven Labour MPs backed Brexit and they have drafted an amendment calling for the UK to exit the EU in March 2019, come what may.

So, on their amendments these ten Tory MPs will need to persuade four of their cohort, which is doable. There are certainly more than a handful of Conservatives who are not enamoured of the prime minister’s approach to Brexit. They will need convincing that this is both the issue, and the time, over which to be causing the government problems. The government’s vague concession yesterday evening could have done enough to stop rebels in their tracks.

So how disruptive are the Europhiles prepared to be? Since the referendum, pro-EU rebels have attempted to pressure the government without voting against it. At each stage of the process, the size of rebellion has shrunk the closer we have come to decision time. Ken Clarke was the sole Tory MP to vote against the bill at its previous stage. This is partly because putative rebels have been able to extract some, albeit vague, concessions.

The government is reluctant to concede on the terms of a ‘meaningful vote’ as defined by the Labour opposition and some Conservative rebels. And with good reason, given the problems this might cause further down the line.

So, if Europhile Conservatives are to get their say next year, they may still need to follow the example of the Eurosceptic rebels who sapped the energy of John Major’s government during the passage of the Maastricht Treaty. These rebels were defined by their organisation and tenacity in campaigning against their own government.

And it was at this same Committee stage of the Maastricht debate that they really began to combine effectively; Philip Cowley counted 54 separate backbench revolts by Conservative MPs, largely over procedural issues that slowed the bill down. While the bill ultimately passed, they made life extremely difficult for the government.

To date, Conservative opponents of the prime minister’s approach to Brexit have failed the two tests for parliamentary rebels. They have lacked weight of numbers, and strength of purpose.

Now it looks as if they could have the numbers. The question is whether they are prepared to make them count.