Defence is another reason for Britain to leave the EU 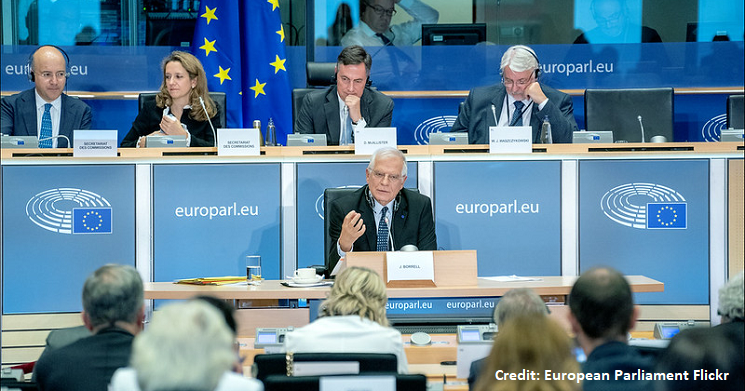 We are living through a period of increasing threat to our security.

This comes from dangerously well-equipped rogue states, from international terrorism, and from random hi-tech dissidents. Each threat requires a different type of response.

Yet public opinion in Britain is apparently not convinced of the need to spend more on defence and security, which is the foremost duty of the state.

At home, there is the possibility of an extreme left-wing government whose leaders have expressed support for the country’s enemies and for regimes most hostile to western democratic values.

Abroad, the EU is now obsessed with two essentially French ideas of ‘strategic autonomy’ and a European Defence Union. These will lead to separation from transatlantic allies and from non-EU European states, including Britain and Turkey.

Over the years, national vetoes on EU policy have been removed in more and more policy areas and EU competences have been expanded at the expense of our national governments.

It is now proposed that previously sacrosanct areas of foreign and defence policy will be handled by ‘Qualified Majority Voting’ – national governments would then no longer have ultimate responsibility for the deployment, equipment and lives of their armed forces.

Josep Borrell, a member of the Spanish Socialist Workers Party, has just been anointed as the new EU’s new High Representative  of the Union for Foreign Affairs and Security Policy.

He will control over 139 EU ’embassies’ with nearly 7,000 staff costing some £500 million. He has a military staff, scanning the globe for opportunities to run up the EU flag on military operations.

So far it has notched up some 30 operational ‘Common Security and Defence Policy missions’. Most were self-generated. Few stand up to scrutiny. There was no requirement for the EU as such to be involved in any of them.

France’s leadership has always seen Britain as a ‘Trojan horse’ for American influence on European security.

They have been trying to remove this influence for the past 60 years. France left the military part of NATO in 1966 while keeping her seat at the NATO top table.

She returned in 2009 only to be the driving force in creating separate EU defence structures that imitate NATO.

The highest European strategic priority should be to ensure the continued commitment of the US to the security of Britain and continental Europe, as the ultimate guarantor of peace.

NATO, an inter-governmental organisation, is designed to achieve this. The EU will never have the necessary strategic credibility to deter our potential adversaries.

Military capabilities take time to develop but are quickly lost.

Aware of how drastically our armed forces have been cut over the past 30 years, many of us have persistently called for a significant increase in real defence spending in the UK and for upgrading NATO.

At the same time we have opposed EU defence policy, not through any shallow motive, but because we see it for what it is – a political project.

The continental states, but also Britain, all need to spend  more on national defence capabilities, revitalising NATO and stepping up to form coalitions of the willing rather than meekly going along with the creation of alternative EU structures, which sap material and political resources and send the wrong signals to our enemies.

Those pushing European integration see the defence realm as key to their political objectives.

Far from strengthening the alliance of the democracies at this time of unprecedented challenge, the ‘EU army’ idea will further dilute what limited capabilities exist, blur responsibility, and send the wrong signals to our adversaries.

The EU also aims to create a defence industrial development programme with common procurement rules that would effectively keep the Americans out of the EU defence market.

All this will lead to division and a widening of transatlantic difference. In time of crisis, the democracies are best served by sitting around the same table to decide on a response.

NATO is designed for precisely that. In spite of the fact that 22 EU member states are also NATO members, the EU wants to meet separately, keeping the Americans out. Moscow and Tehran can only be delighted.

Our incoming Prime Minister will face many immediate and enormous challenges.

High among these will be our national defence and security. Clearly someone with Jeremy Corbyn’s beliefs cannot be allowed anywhere near our armed forces, our nuclear deterrent, our defence industries or our intelligence services.

Boris Johnson is well aware that improved defence capabilities are not only essential for our national security, but central to our ambitions to enhance our global presence after Brexit and to play a leading role in the development of our hi-tech industries.

In support, much will need to be done to develop positive public understanding.

Rather than us being the needy one, Britain must once more become the indispensable ally that others need.

This piece is part of a series of blogs by political party candidates and representatives in the upcoming general election.