Article 50 one year on: demographic change, public opinion and Brexit 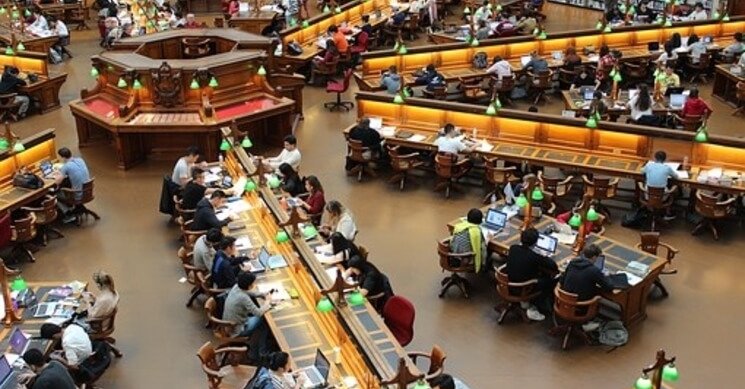 On 28th February 2018, former Prime Minister Sir John Major caused a stir by declaring that: “By 2021 […] the electorate will have changed. Some voters will have left us. Many new voters will be enfranchised. […] No one can truly know what ‘the will of the people’ may then be.”

While no one can predict for certain how the electorate will look in coming years, there are some robust and well established demographic trends that will influence opinion in future: rising education levels, rising ethnic diversity and generational change.

Projecting these trends, we can offer an estimate of how the political climate may change over the Brexit transition and beyond.

However, in 2016 many Remain voters also wanted a reduction of EU powers, so the demographic trend is not necessarily one in favour of reversing Brexit, but it does suggest public pressure for close association with the EU will rise over time.

As Sir John Curtice has highlighted, one year on from the invocation of Article 50, and nearly two years after the vote to leave the European Union, there is little evidence of a major shift in public opinion on Brexit.

One major reason for this stability is that public views reflect deep rooted divides in voters’ values and worldviews. But the distribution of these values and outlooks in the electorate is not static. It is closely related to demographic background and social change, and so responds to long-running demographic trends.

This change, while largely unobserved in day-to-day politics, continues and will affect attitudes towards Brexit.

While these are projections based on current trends, and make the unrealistic assumption that nothing else will change, they do highlight that the Brexit majority is fragile and on the wrong side of powerful demographic pressures, with eurosceptic social groups shrinking over time while more europhile groups expand.

Core values and outlooks do not change quickly, if at all, but they are associated with key demographic factors such as education level, ethnic identity and formative experience.

Three overlapping processes of long-run demographic change—university expansion, rising diversity and generational replacement—are all increasing the share of the electorate who hold the socially liberal and cosmopolitan values associated with EU support.

These processes of political climate change are slow, but relentless. They could exert a growing influence on views of long-run relations with the EU as we move on from the breakneck schedule set by Article 50 to the slower processes of transition and renegotiation.

Education, ethnicity, migrant status and generation were all strong predictors of vote choice in the EU referendum.

All the Leave-leaning groups – school leavers, white- and British-born voters, and those who grew up before Britain joined the EU – are shrinking over time. Simultaneously, all the Remain-leaning groups – graduates, ethnic minorities and migrants, and the younger cohorts who came of age after the Maastricht agreement – are growing.

The first of these shifts is educational expansion. Figure 1 charts the share of respondents in the British Social Attitudes survey who report having a university degree, and the share who report leaving school with no qualifications at all.

Every year over the past three decades or so, the share of the electorate with no formal qualifications has fallen by around one percentage point, and the share with a university degree has risen by around 0.7 points.

These are not big changes, but they quickly add up. If these trends continue – and they are likely to – then by 2021, when the transition period is due to end, graduates could outnumber school leavers three to one.

Figure 1: Share of respondents with a degree and those with no qualifications in the British Social Attitudes surveys, 1983-2016 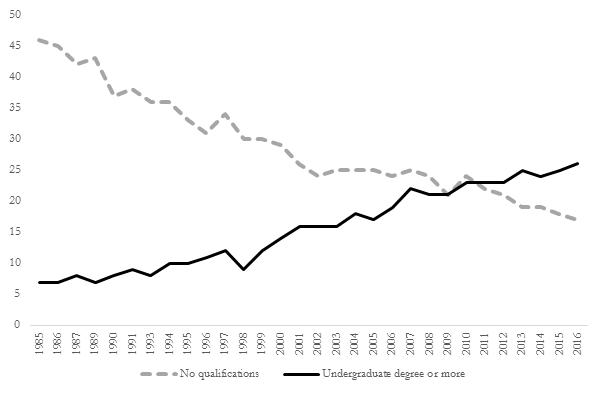 Diversity is also rising slowly but steadily. The share of respondents from an ethnic minority group has risen from around 2-3% in the early 1980s to 11-13% now – a rise of around three points per decade.

The censuses taken every ten years also show that the share with an ethnic minority background doubled from 7% to 14% between 1991 and 2011.

And this is not including the migrant-origin population, which has grown at a similarly rapid pace – Office for National Statistics data suggests the share of British residents who were born in another country increased from 9% in 2004 to 14% in 2016 – or their children. Recent growth has been particularly fast among EU-origin migrants.

There are good reasons to expect the trend of rising diversity to continue. The ethnic minority population is younger on average than the white population and growing faster, and, despite a recent fall in arrivals from the EU, immigration levels remain very high, with hundreds of thousands of migrants settling in the UK each year.

If the trends seen over the past two decades continue, the electorate will have substantially larger shares of migrant and ethnic minority voters in coming years than it did in 2016. Indeed, Brexit might – paradoxically – accelerate this shift as EU citizens resident in the UK acquire UK citizenship (something relatively few saw as necessary before Brexit). 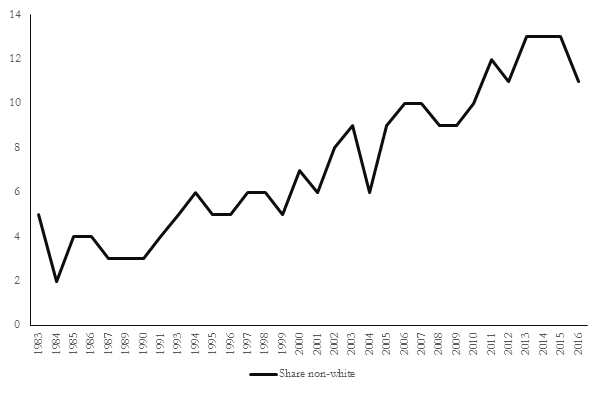 Generational change is the final process reshaping the electorate. While voters’ attitudes can change as they age, there is a lot of evidence that the different conditions prevalent when generations come of age have a lasting impact on their values, and that younger cohorts generally have more socially liberal and cosmopolitan outlooks.

Generational replacement is therefore likely to slowly pull attitudes in a more liberal direction, with older, more socially conservative cohorts who came of age before Britain joined the EU slowly fading away, while new socially liberal and cosmopolitan young voters, who have no memory of a Britain outside of the EU, join the electorate.

In 2004, nearly half of the electorate had turned 18 before 1973, growing up in a Britain before it joined the precursor to the EU, while just one in six had turned 18 after 1993, coming of age in a more diverse Britain participating in a more integrated European Union.

By the time of the 2016 EU referendum, the pre-European Economic Community (EEC) cohort had shrunk to just over one in four of the British population, while the post-Maastricht cohort had risen to nearly 40%. The eurosceptic views of older cohorts were more strongly represented in the 2016 referendum, as turnout was much higher amongst the old than the young.

But differential turnout cannot hold back the tide of generational change indefinitely, and mortality and cohort replacement will pull the balance of opinion towards the more pro-EU views of younger generations in years to come.

For simplicity and illustrative purposes, we have defined two very broad cohorts of older and younger voters, but this may in fact understate the coming pro-European shift produced by generational replacement, as the very oldest cohorts in Britain are the most eurosceptic while the very youngest are the most pro-European.

Figure 3: Share of British Social Attitudes respondents who turned 18 before Britain joined the EEC and share who turned 18 after the Maastricht Treaty 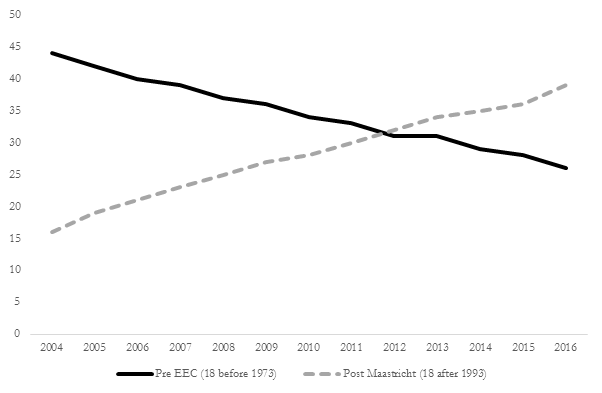 We can use a two-step process to make a rough estimate of the potential impact of these demographic trends at three future points: the end of the Article 50 negotiation period in 2019, the anticipated end of the transition period in 2021, and 2026, a decade on from the EU vote.

First, we simply project forward the demographic trends found in the British Social Attitudes data to provide estimates of the population composition at these three points. Secondly, we use a statistical model of how these demographic factors predicted Brexit vote choice to estimate how the projected demographic change affects overall support for Brexit in the electorate.

The table below offers a summary of how the population will change on these three characteristics, and then how support for Brexit might change accordingly.

Table 1: Projected change in demographic composition of the electorate 2016-2026 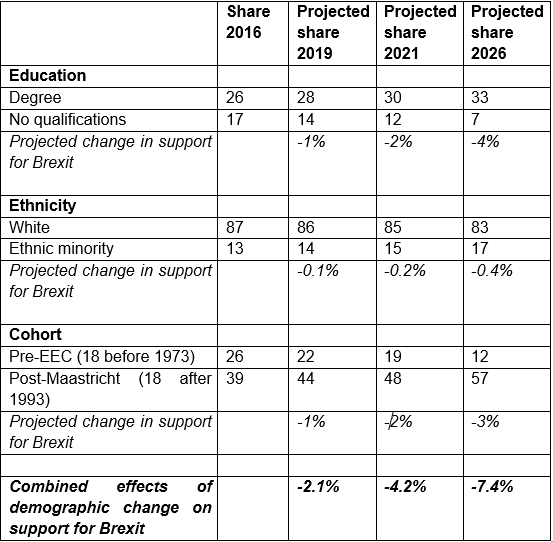 Brexit has also changed views about the status quo – many of those who backed Remain believe the result of the referendum should be respected and would not support a complete reversal of the Brexit process. Many in the rising europhile demographic groups would instead prefer to see Britain outside the EU but closely aligned to it.

While the long-term trend is clearly towards a less eurosceptic political climate, we should not make the mistake of assuming this means a European spring is just around the corner in Britain. Many of those who voted Remain in 2016 were not enthusiasts. To give one example, 60% of Remain voters in the 2016 British Social Attitudes survey also wanted to see the EU’s powers reduced.

While ‘hard’ Brexiteers look to be on the wrong side of demographic trends, a softer form of Brexit could – all else being equal – enjoy broader and more sustainable support in the long run.