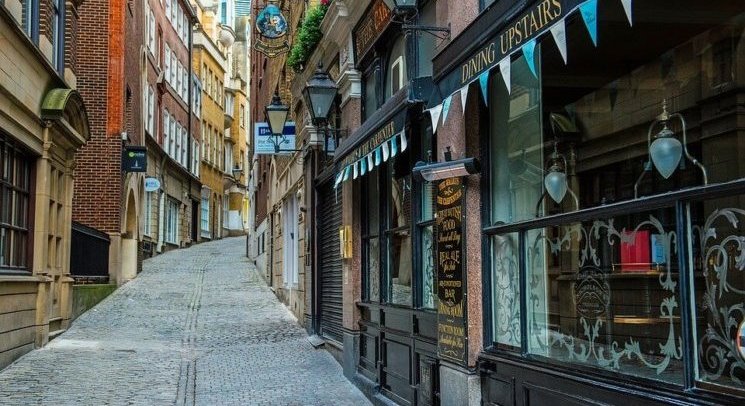 England is marked by persistent geographical disparities in economic and social conditions and highly-centralised governance. Yet some advocates of decentralisation see it as the ‘golden thread’ of Brexit and an opportunity to reverse centralisation and ‘take back control’ of local affairs from a distant and unresponsive national government and political establishment.

The history of devolution in England means we should be cautious about loading decentralisation with unrealistic expectations without giving its institutions meaningful powers and resources.

Since 2010, decentralisation has been implemented in an ad hoc, incremental and piecemeal way. The result has been a governance patchwork with insufficient autonomy and funding to address local economic and social issues.

Social and spatial disparities in England are longstanding and amongst the largest when compared with other countries. Studies of Brexit’s potential economic impacts reveal its effects will be negative and most severe in places with the least ability to cope.

Economically weaker regions with lower levels of economic diversity, skills and connectivity in the midlands and north of England are expected to fare badly from Brexit. Such places were also those registering the highest support for leaving the EU. Brexit is therefore likely to increase rather than decrease spatial disparities and further stoke the local disquiet that led to the vote.

The UK, and especially England, has one of the most centralised governance systems in the world. And it has been moving in a more centralised direction. Between 1975 and 2012, the proportion of taxes raised locally decreased from 11% to 5% while in many other comparable countries it increased.

Disparities and centralisation are integral to explaining Brexit. People were frustrated with being ‘left behind’ by economic restructuring, globalisation, technological change, and austerity.

They lacked voice and were disconnected from a distant, liberal and metropolitan elite making decisions on their behalf. As a howl of protest, the vote was ‘the revenge of the places that don’t matter’.

As the largest economic, demographic and political unit of the UK, how to govern England has been a difficult question. Various answers have been given in recent decades, swinging between institutional arrangements at different geographical scales (Figure 1).

Finding an appropriate governance settlement in England has been troubled by uncertainty about whether decentralisation can ameliorate or even reduce spatial disparities. Our international review revealed mixed evidence. 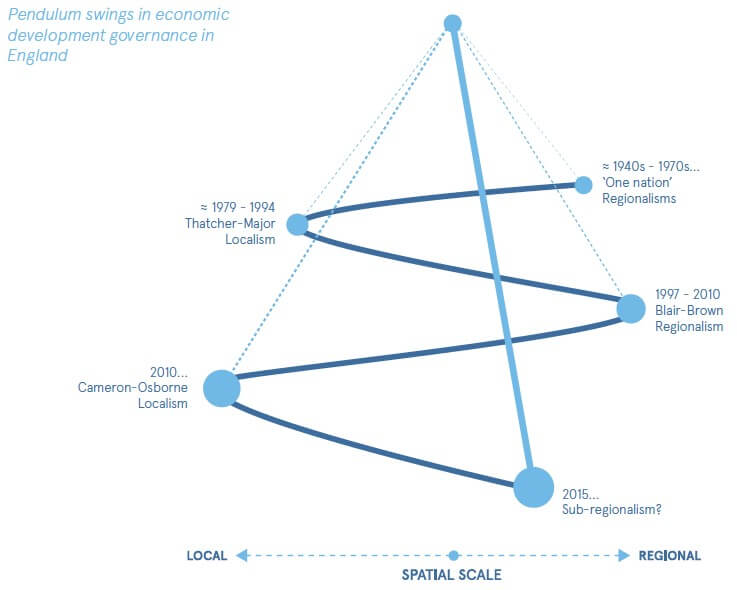 Successive national governments have been lukewarm about, if not resistant to, devolution in England. National politicians and officials are reluctant to let go and distrustful of the capacity of local actors.

Decentralisation has been offered as the answer to numerous questions. It has been dragged in different directions by multiple goals: local growth, public service reform and expenditure reductions, democratic renewal, and societal challenges such as ageing and climate change.

Repeated institutional reorganisation has generated disruption, undermining stability and long-term strategic planning, and making governance more complex for those involved, business and the public. With limited powers and resources, decentralisation in England is more like a weaker form of delegation than a stronger form of devolution.

Given England’s experience, the claim that further decentralisation will help local areas prepare, respond, and adapt to Brexit needs to be treated cautiously. Brexit is unique, unprecedented, uncertain and profound as an economic and political shock and process. It is unclear exactly what kind of Brexit we will get because it is still being contested and negotiated.

Yet studies are clearly revealing that the longstanding problems of weaker economies across England will be amplified by Brexit. Among the causes of spatial disparities are poor connectivity and infrastructure, limited diversity in economic structures, weak innovation capacity and potential, and lagging skills.

Political and economic peripherality in the UK is delivering less growth-enabling public investments from national government for poorer areas compared to London and the Greater South East. The adaptive capacity and knack for economic reinvention lacking in some places in England means they are likely to be further exposed economically by Brexit.

While there is agreement that continued or further governance centralisation will not help places address spatial disparities and issues likely to be aggravated by Brexit, decentralisation in England needs to be accompanied by a substantive shift in powers, resources and voice.

The current ad hoc, incremental and piecemeal governance needs to move towards a more planned, transformative and comprehensive approach. It will, however, need to work with the different geographical scales and institutions of governance that have emerged in England since 2010.

If the need is for greater local discretion and resources to formulate tailored responses to local circumstances in the wake of Brexit, progress can be made in five areas. First is ensuring that the repatriation of powers from the EU will not just lead to further centralisation at the national level in an already highly centralised system. Greater voice for places within England is needed to help the national centre to listen.

Second, the UK Shared Prosperity Fund replacement for EU funding needs to retain a strong redistributive purpose and not end up with substantively fewer resources that are nationally controlled and allocated.

Third is the government’s review of the roles, leadership and corporate governance, accountability, geography, and organisation of the Local Enterprise Partnerships should bolster rather than erode their capacity as key local development actors.

Fourth is the need for an urgent review of the funding of local government able to provide more tax and spending powers as well as maintaining the redistribution between richer and poorer areas. Last is the need for greater openness and deeper engagement of local governance institutions with their local populations.

Failure meaningfully to decentralise England’s governance amidst Brexit risks some people and places being left even further behind. Not moving on this agenda endangers achievement of the UK government’s stated aims for ‘rebalancing’ and ‘spreading wealth and prosperity across the UK’ and will do little to address the underlying causes of the Brexit vote.