D’Hondt be fooled by the European election results 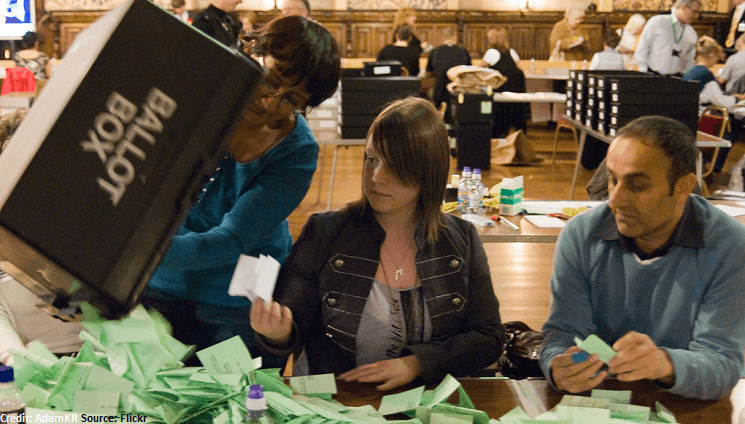 The elections on 23 May will probably be the most eagerly awaited European parliamentary vote ever held (admittedly this is a low bar to clear). We go into the elections with the Brexit deadlock remaining stubbornly unbroken and party politics in turmoil after the entrance of two completely new players (the Brexit Party and Change UK).

With many people now regarding psephology as about as accurate as astrology (but less entertaining) an election involving millions of actual voters might provide more clarity and direction than disputed polls. But election-watchers should be wary: the immediate headlines are likely to be an over-simplistic reading of the results.

This despite the fact that up to 70% of people will have chosen not to vote for them. In a country which uses the First Past the Post system to elect the national government it is common for the party which ends up running the country to be elected on a vote share of around 35%, but in the context of the European Parliament, coming first is not very meaningful.

This is partly because it uses a proportional system to elect MEPs, but also because the party with the most number of votes does not actually ‘win’ anything. Of course their MEPs will form part of wider pan-European groupings and have an impact on legislation and the choice of the next European Commission President, but this is not the same as winning control of the government.

The D’Hondt system, under which MEPs are elected, tends to favour larger parties and fragmenting the pro-Remain vote seems likely to reduce the overall number of MEPs elected on an anti-Brexit stance. But attempting to draw any conclusions about what might happen in a general election or a referendum from the numbers of representatives elected under a completely different system is not helpful.

A better place to look for answers are the vote shares for each party. Yet these numbers also come with a big health warning attached to them. People tend to vote very differently in European elections to the way they would vote in a general election; these elections are often seen as a ‘safe’ way to administer a kicking to the establishment which is why smaller parties and the opposition tend to do disproportionately well.

If general elections had followed the results of European parliamentary elections then Nigel Farage, William Hague, Michael Howard and Neil Kinnock would all have ended up as Prime Minister. Nevertheless, the results will give a good idea of where voters might be heading. All the indications are that both the Tories and Labour will have a rough time – and whilst many of their lost votes will come back to the main parties in a general election, there will be major implications if a significant minority of them do not.

The first is how to interpret votes for Labour and the Tories. In the 2017 general election two thirds of Labour supporters had voted Remain the previous year. Many of those Remainers seem likely to vote for another party in the European elections but some will stay loyal, and the percentage split of Labour Leavers and Remainers cannot be deduced from the headline numbers.

On the other side not all votes for the Tories can be interpreted as Leave votes as a third of 2017 Conservative voters were Remainers. For some voters, tribal loyalties to their chosen party or concern about other issues will outweigh their feelings about Brexit.

The second problem is turnout – European elections tend to have about half the turnout of a general election, and the people who do vote are not a representative of voters as whole. Only those with strong opinions about Brexit and/or politics in general, will make the effort to turn up at a polling station.

In an actual referendum, the turnout would include many more voters who are not particularly engaged with politics and we will not be able to tell us how those voters would split between Leave and Remain. What the vote share will do, is give an indication of how strongly the two sides feel. This is important as the main political parties try to assess how many of their voters might defect to another party in a general election over Brexit. For instance, within Labour, there has been an enduring perception that Remain voters are more likely to stick with the party than Leave voters. These elections will put this to the test.

When the results come out on Sunday evening many of the initial headlines are likely to be misleading. The elections are not a proxy referendum, nor a good indicator of how people would vote in a general election. But this does not mean that the elections will tell us nothing at all.

They will give us a clue as to how motivated Remain and Leave voters are relative to each other, and this could have a big impact on policy choices for the two main parties. But some of the most interesting insights will be gathered from asking people why they voted the way they did and then working through the implications for the political parties and for the Brexit process; which will mean going back to the pollsters again.

The reason that the Brexit deadlock has been so difficult to break is that the public are deeply divided and it is genuinely unclear what outcome would be acceptable to most people. Don’t expect the results of these elections to give an unequivocal answer.

By Christabel Cooper, a data anaylst at UCL.