Did Brexit undo Labour at the election? 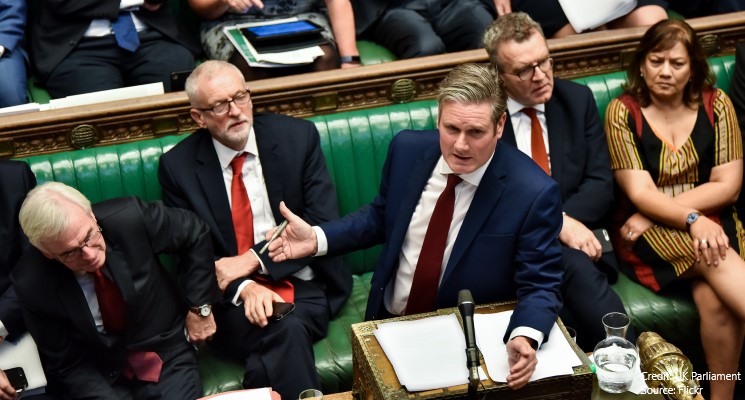 Despite the Labour Party’s insistence that its position on Brexit was perfectly clear (first negotiate a better deal, then put this deal against remain to the public in a second referendum, while the leader remains officially neutral), we now know the voters disagreed.

Moreover, even if Labour had been afforded space to make a case for its position, many voters, after three years of noise and confusion, had already stopped listening.

As such, the hottest Corbynite take on the defeat was that because 2019 had been ‘a Brexit election’, leave-voting electors had little choice but to opt for the Conservatives’ unambiguous position on EU withdrawal, while punishing Labour for its honourable but belated attempt to bridge the Brexit divide.

This view has some foundation in reality, but probably not enough to exonerate the Labour leadership.

Corbynite loyalists have moved quickly to blame shadow cabinet members such as Emily Thornberry and Keir Starmer for forcing the party into offering a second referendum (we should add John McDonnell, Diane Abbott, most of the trade unions and the vast majority of Corbyn supporters among the membership to this list too).

However, by the time the election came around, Labour clearly could not have presented itself as a pro-leave party, since it would have appealed only to ‘Labour leave’ voters (which is a considerably smaller group than popular portrayals of the Brexit vote suggest).

The vast majority of leave voters had other places to go. This is not to suggest Labour’s position was a good policy; it most definitely was not. What could the party have done differently?

The case for remain (and time travel)

The problem is not necessarily the party’s fudged position, but rather how Labour cornered itself into adopting it.

It remains my view that Labour could and should have become the unambiguous champions of a second referendum immediately after the 2016 vote, for a number of reasons.

First, over the long term, irrespective of how the 2016 electorate voted, future electorates could punish those seen to be responsible for the damage that Brexit will do to our economy, our union, and our democracy.

Because the main victims will be those already worst off, and their children, Labour will be the party punished most severely.

Second, as a matter of short-term electoral strategy, remain/second referendum regained its lead over leave in early 2017, and has retained it ever since – as the 2019 result (where pro-referendum parties, including Labour, gained more votes) appears to demonstrate.

How this breaks down geographically is obviously highly complex. A remain position may not have helped bridge the city/town divide seemingly evident in Labour’s base.

Nevertheless, if your main rival goes big on securing the support of around half of the electorate on the most pressing political issue of the day, making sure your offer to the other half is at least decipherable is critical.

Third, adopting an unambiguous position, either way, would have avoided three years of coverage of Labour navel-gazing.

Moreover, while a leave position would have been dogged by uncertainty over what kind of Brexit the party favoured, a second referendum does what it says on the tin.

Fourthly, a pro-remain position would have been a good place for Corbyn himself to be positioned.

Ironically, his antipathy to the EU, which impeded the remain cause in 2016, would have become an asset as the case for remain-and-reform solidified. (It would also have avoided the failed ‘coup’ from which the PLP has never really recovered.)

The case for leave (and more time travel)

Alas. While a pro-remain strategy was available after the referendum, it disappeared the moment Labour equivocated – arguably, Jeremy Corbyn’s remarks on the morning after the referendum – after which point it became necessary for Labour to get its own Brexit done as quickly as possible, essentially by adopting a version of leave.

In fact, while Theresa May tied herself up with her no deal/bad deal nonsense, Labour should have been the champions of ‘soft Brexit’, and withheld its support for the Article 50 declaration until May accepted its demands.

The 2017 election would never have happened, May would probably still be Prime Minister, and Labour could well now be preparing for a likely victory in the 2020 election.

Almost all of Labour’s thinking on Brexit since the less disastrous 2017 defeat has been driven primarily by the urge to force Theresa May from office.

Did Corbyn really believe the Conservative Party was ever going to let May fight another election before Brexit had been secured?

The only departure scenario was the one that eventually came to pass: May being forced to resign by her own party, and inevitably being replaced by the more electorally dangerous Boris Johnson.

If the Labour leadership had any plan whatsoever for how they might confront Johnson, it was difficult to discern.

Labour’s next sliding doors moment came when it was asked to support Theresa May’s withdrawal deal. This was far from a no-brainer.

On the one hand, the backstop encapsulated every single Labour demand, and the political declaration left the future trade arrangement up for grabs.

On the other hand, being seen to prop up May would have been temporarily uncomfortable, and it may have left Labour with a portion of the blame for Brexit’s ill-effects.

Overall, however, the political salience of Brexit would have declined significantly: Labour would take a short-term hit in return for a long-term run at May on the Conservatives’ domestic record.

Another opportunity – arguably a better one – came in early 2019 when, after failing to get her withdrawal deal past the DUP and ERG, May belatedly looked to Labour for cross-party support.

What compromises were Labour demanding? I have absolutely no idea.

May could (and perhaps should) have offered a form of words on these issues that allowed Corbyn to claim some sort of concession had been achieved. Her unwillingness to do so does not excuse Labour’s strategic mis-step.

After nearly three years of turmoil, Labour had a lot to gain electorally from getting a tolerable Brexit done when they had the chance.

Of course, while all academic commentators are blessed with 20/20 hindsight, travelling back in time to right things that once went wrong is, as far as I know, not yet available to political parties.

Yet a Labour Party more firmly rooted in the constituencies it seeks to represent – dozens of which have now been lost – might have been better able to make the case to Labour leavers for a second referendum or, when this opportunity was forgone, would have better understood the importance of resolving the Brexit impasse long before it was necessary to face the electorate again.