Do the European elections matter for Brexit? 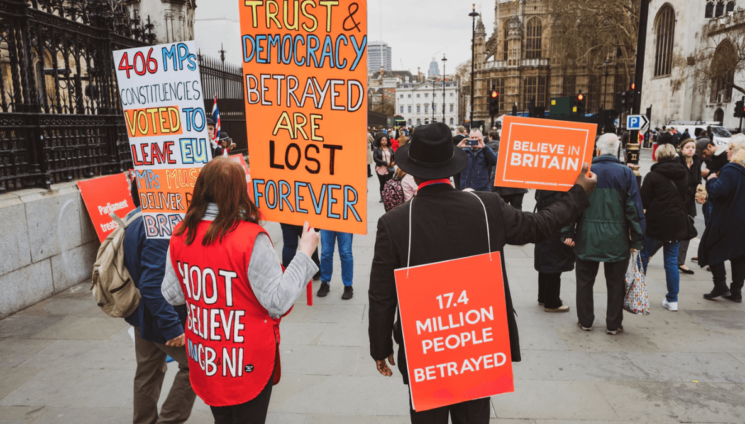 At the risk of being overly parochial about Europe-wide elections that, as the other contributions to this collection show, will have myriad implications for the EU and its member states, it’s also worth considering what, if anything, they might mean for Brexit itself. Clearly, the vote will have implications for politics throughout the UK. They could also, however, weigh more directly on the Brexit process itself.

In the first place, of course, the election will shape how MPs feel about Brexit and its relationship to electoral politics. Should the Brexit Party score heavily, more Conservative MPs might join the band of those willing to countenance – or at least give the appearance of countenancing – a no-deal outcome.

Conversely, should Nigel Farage win significant vote share in leave-supporting Labour seats, might this prove sufficient to persuade reluctant Labour MPs to back the withdrawal agreement? And if parties supporting another referendum score well, might this shift parliamentary opinion in that direction?

But imagine – if you can – that the outcome is that the Withdrawal Agreement miraculously receives majority support in Parliament. At that point, it will also need to be approved by a new set of MEPs. And this is potentially important given that, in the current parliament, there is a stable majority—centred around the Brexit Steering Group of five political groupings—that supported the Commission’s approach and, ultimately, the Withdrawal Agreement itself.

These groupings look likely to keep their stable majority after the elections, but its composition will shift. If nothing else, the European Parliament will become a more unpredictable body, as parties form groupings and determine their policy positions. What has so far been a relatively comfortable consensus on Brexit could come under pressure from a more sizeable eurosceptic presence on the right, with more MEPs sympathetic to the arguments of British eurosceptic politicians.

And of course the parliament will play a role in the selection of a new European Commission. Since the introduction of the Lisbon Treaty in 2007, the European Parliament has to approve the president of the Commission by an absolute majority. Whoever heads the Commission will have a large bearing on UK-EU relations. It is, after all, the Commission which will be the UK’s main interlocutor in talks on the future relationship, as it has been in the withdrawal negotiations.

That the traditional ‘grand coalition’ groups look set to lose their overall majority for the first time introduces uncertainty, both in terms of who the next Commission president will be and about the process of selecting her. If, as looks likely, the two largest groupings – the S&D and EPP – have to rely on the liberal group (ALDE) to form a majority for deciding on major posts, this will have a substantive impact.

To take one hypothetical example. A Commission led by Michel Barnier – a far from implausible outcome should the Spitzenkandidaten process fail to deliver a candidate who can win majority support in the Parliament – could be expected to cleave closely to the approach adopted by the Article 50 Task Force to date. A different Commission President might, by contrast, take issue that approach (we have already seen signs of tension between Barnier and Juncker over Brexit).

And, of course, the new parliament will play a significant role when it comes to agreeing a future relationship between the UK and the EU. Warning signs are there already. The European Parliament, for instance, rejected a motion offering tentative support to limited trade talks with the US. It did so because a coalition of the Socialists, Greens and far-right groupings insisted on conditions for such talks.

They demanded that the existing negotiating directives for EU-US (TTIP) trade negotiations be revoked and inserted several conditions on any further talks with the US: first, that aluminium and steels tariffs be lifted; second, that the agreement be subject to a carbon impact assessment; and, third, that it includes cars but excludes agriculture.

This hints at some of the problems that might confront the UK with a more divided and polarised European Parliament. The EU’s talks with the US are now highly politicised following the TTIP saga. The Brexit process to date has raised suspicions concerning the UK’s intentions in Brussels. It is easy to imagine a similar shopping list of preconditions – on climate change, minimum regulatory standards, inter alia, to be drawn up by MEPs.

The US example shows that the concerns of EU politicians of both left and right can easily align when it comes to trade matters. If, as looks likely, the combined size of the political extremes increases after these elections, the UK could face both protectionist impulses from the right, coupled with environmental and social demands from the left.

Beyond the direct implications of the elections, there will also be more indirect effects, most notably in terms of the nature of EU legislation. Arguments for a more ‘protective’ EU are gaining ground, not just on the fringes of EU politics but among leading figures such as the centre-right lead candidate for the Commission presidency, Manfred Weber, and French president Emmanuel Macron.

These impulses will only be bolstered by a more eurosceptic and nationalist body of MEPs. And this of course comes at a time, perhaps not coincidentally, when one of the EU’s more liberal member states is leaving the bloc, shifting the balance of power in the EU institutions.

Britain is, of course, still a member of the European Union and hence still subject to its laws. Even after Brexit, however, should this take the form of a managed departure with a Withdrawal Agreement in place, the transition period will see the UK remain a rule taker but without a say. It is then that the implications of parliamentary influence over the legislative process will really be felt.

The EP elections are about far, far, more than Brexit. Even here in the UK, they are, in part, about the rules that might govern us for some years to come. Nonetheless, their outcome will also weigh significantly on the way the UK leaves the EU and on UK-EU relations for years to come.