Do voters support a no-deal Brexit?

Boris Johnson is insistent – if a new deal on the terms of Brexit is not agreed with the EU by the end of October, the UK should be prepared to leave without a deal.

But attempts are being made by MPs to pass legislation that would outlaw a no-deal Brexit. Both sides claim voters support their point of view.

So, what is the evidence of the polls?

Support for no deal?

Within the past two months, four polls have asked people if they are for or against leaving without a deal.

Despite differences in the wording of the questions, the results are remarkably consistent.

Slightly more people say they are opposed to leaving without a deal than state they are in favour. 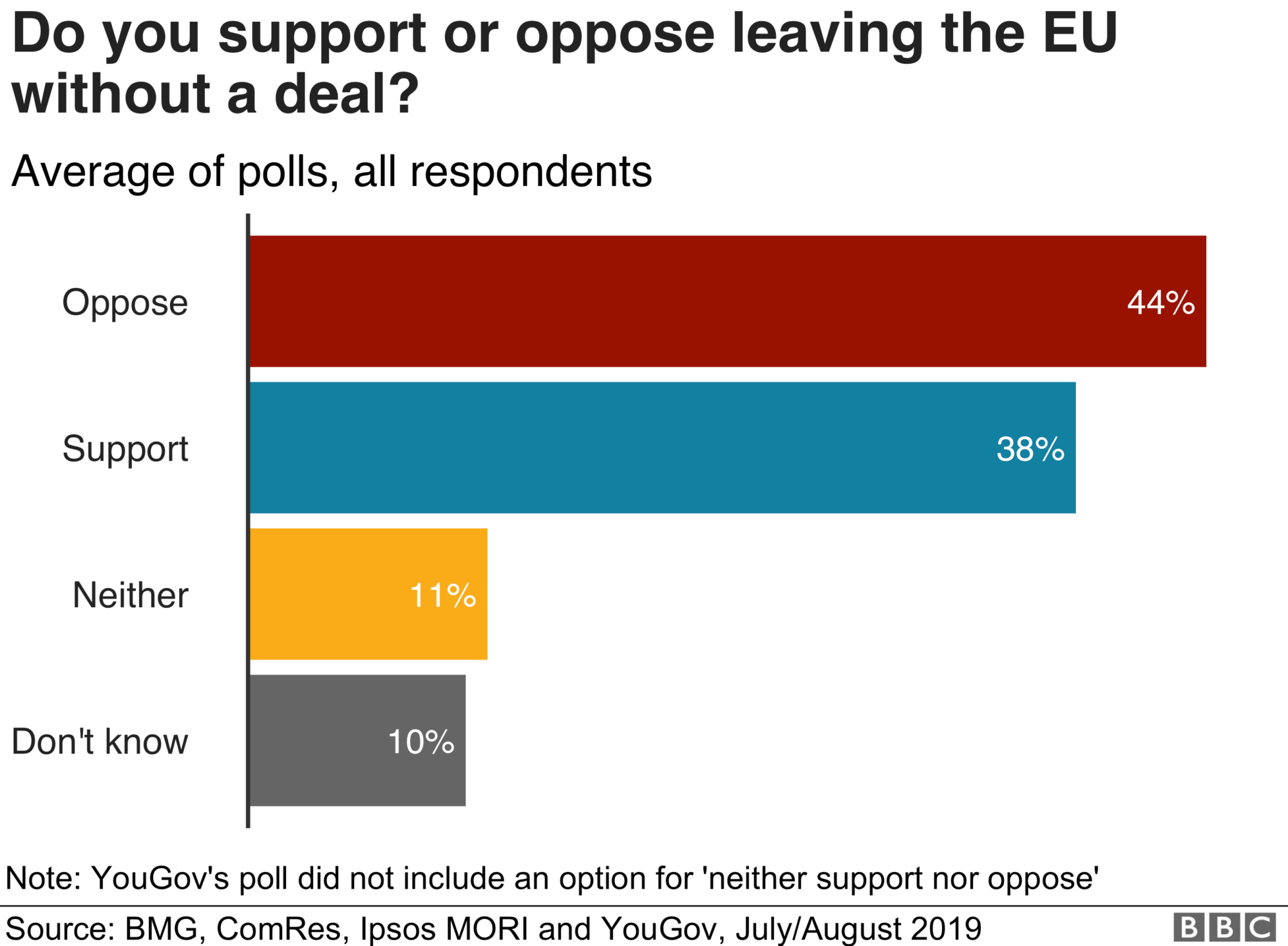 However, there is a sharp difference between Remain and Leave voters.

Whereas about three out of four of those who voted Remain in 2016 say they are opposed to leaving without a deal, the position among Leave voters is almost exactly the reverse.

The debate divides the country in much the same way as the 2016 referendum did. At that time, 52% voted Leave and 48% Remain. So, why do the polls suggest more people oppose than support leaving without a deal?

The answer lies in the views of those who did not vote three years ago. Only about one in five (21%) of non-voters support leaving without a deal, while twice as many (43%) are opposed.

Still, the government’s policy is not to leave the EU without a deal whatever the circumstances. Rather, it only proposes doing so if a satisfactory deal is not obtained by the end of October.

Is this reflected in how voters approach the prospect of no deal?

A first indication comes from the answers YouGov obtained when they asked a more detailed question about “leaving the European Union without any deal”.

People were asked not only if that would be a good outcome or a bad outcome, but also whether it would be “an acceptable compromise”. 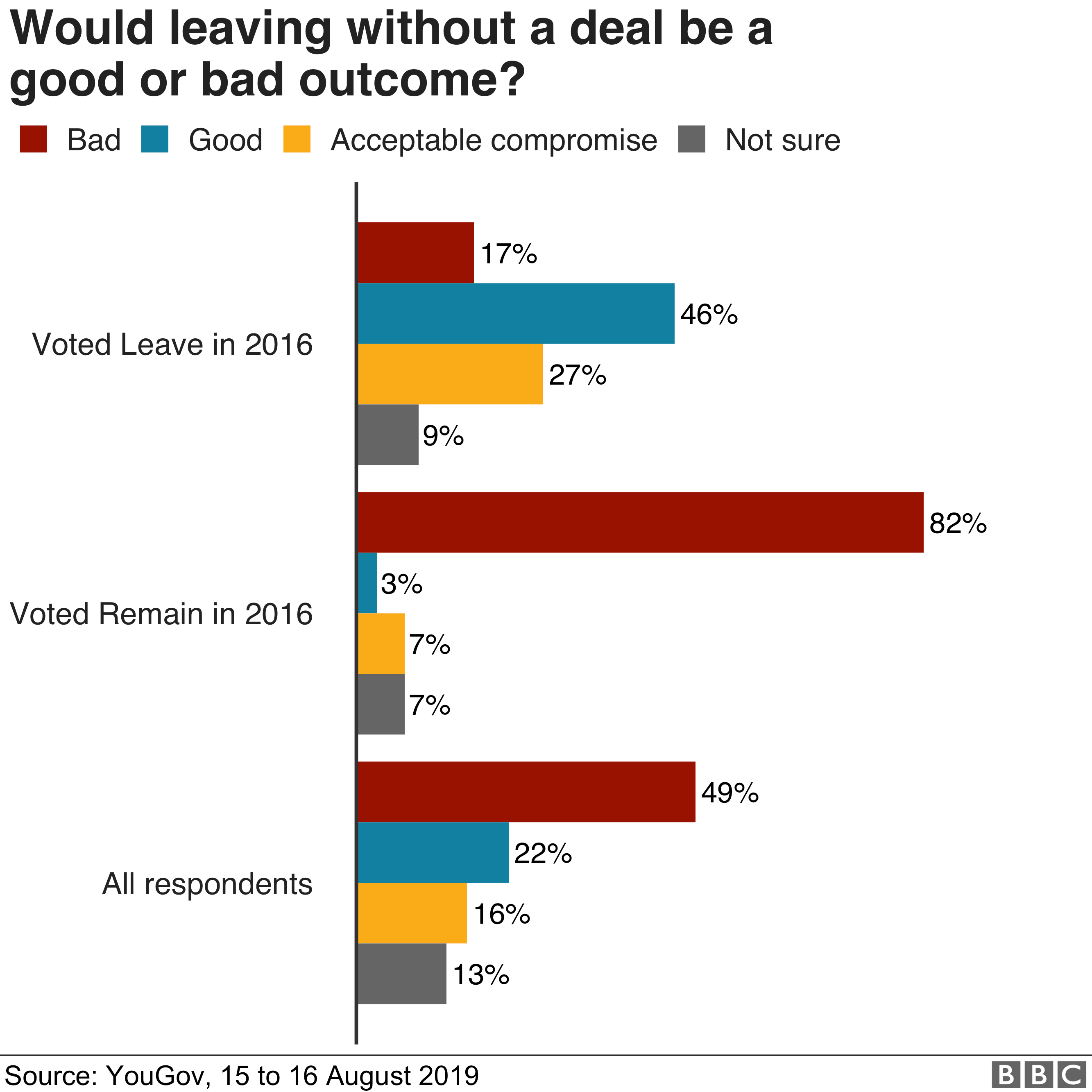 Eight out of 10 Remain supporters claim that a no-deal Brexit would be a bad outcome. This is in line with the 76% who say they are against leaving the EU without a deal, when offered a straight choice between support and oppose.

However, a different story emerges among Leave voters.

The proportion who say that leaving without a deal would be a good outcome is 46%. This is well below the 73% who say they back leaving the EU without a deal, when offered a straight choice.

About a quarter (27%) of Leave voters prefer to say a no-deal Brexit would be an “acceptable compromise”, rather than a “good outcome”.

Here, perhaps, is a sign that leaving without a deal is, for some Leave voters, something they might ultimately be willing to back, rather than an outcome they would most like to happen.

What if a deal was possible?

Further evidence in this direction emerges when voters are asked which Brexit outcome they prefer.

In June, YouGov asked people to place four possibilities in order of preference:

While 59% of Leave voters said that leaving without a deal was their first preference, 33% preferred one of the two possible deals.

Very similar results were found by Kantar when it put much the same set of options before voters.

The willingness of some voters to back leaving without a deal might well depend on whether or not they think the government could in fact have secured an acceptable deal – or whether the fault lies with the EU.

When ORB asked whether the UK should leave without a deal, “if the EU is unwilling to reopen negotiations on the withdrawal agreement”, supporters (46%) outnumbered opponents (39%).

In contrast, when Ipsos MORI asked people whether they would support leaving without a deal, “if the UK and the EU cannot agree a deal on the terms of the UK’s departure from the EU by October”, as many as 50% said they were opposed and only 38% in favour.

Persuading Remain supporters of the necessity of a no-deal Brexit looks likely to be a tall order.

But Leave supporters may well back the idea if they are persuaded that Brussels is to blame.

By Sir John Curtice, senior fellow at The UK in a Changing Europe and NatCen Social Research, and Professor of Politics at Strathclyde University. This piece was originally published by the BBC and is based on Sir John Curtice’s recent paper ‘Public attitudes towards a no deal Brexit’.