Does Soubry or Rees Mogg best speak for the Tories?

The Conservative Party’s long-standing split over Europe was showcased rather vividly last week when the MP Anna Soubry remarked that the Tory front bench was “in hock to 35 hard ideological Brexiteers, who are not Tories”. According to Ms Soubry, “the time has come for the moderates and centrists within the Conservative Party, dare I use the expression, to take control of our party”. Ms Soubry added that she was “not going to stay in a party which is being taken over by the likes of Jacob Rees-Mogg and Boris Johnson”.

But as the columnist Gaby Hinsliff asks in The Guardian, “if Jacob Rees-Mogg and Boris Johnson are not proper Tories, then who is?” Indeed, over the last year or so Mr Rees-Mogg has emerged from relative obscurity to become one of the leading contenders for the next party leader.

He is the frontrunner in the betting markets, just ahead of two other prominent Brexiteers, Michael Gove and Boris Johnson. In the latest poll of Conservative Home blog readers, he came top with 21 per cent of the vote. Mr Rees-Mogg’s popularity is reflected in the fact that newspapers speak of “Moggmentum”, an online social movement complete with its own logo and Wikipedia page.

What’s more, the “Honourable Member for the 18th century”, as he was once dubbed, proved such a hit at the Tory conference that budding Conservatives reportedly queued for more than an hour to hear him speak.

All of this provokes a question: when it comes to the crucial issue of Brexit, who is more representative of Conservatives — Anna Soubry or Jacob Rees-Mogg? Perhaps we can find an answer by drawing from polls of voters and MPs.

Let’s begin by examining figures from a poll of Westminster MPs, conducted by Ipsos Mori in the winter of 2017. It asked MPs from the two main parties about Brexit, including how they voted, what outcomes would respect the result of the referendum, and whether the government should prioritise single market access or controlling immigration. Happily, several of these questions were also included in Lord Ashcroft’s poll of voters in the summer of 2016, which allows the two to be compared.

The chart below shows the percentage of MPs and voters who said that each of three outcomes would not respect the result of the referendum. Results for the first are not particularly informative given that, as far as I am aware, both Ms Soubry and Mr Rees-Mogg believe that EU migrants living in Britain should have the right to stay.

However, results for the second and third outcomes provide rather greater support for Mr Rees-Mogg’s vision of Brexit, with 50 per cent of MPs and 83 per cent of voters having said that continuing to pay into the EU budget would not respect the result of the referendum. 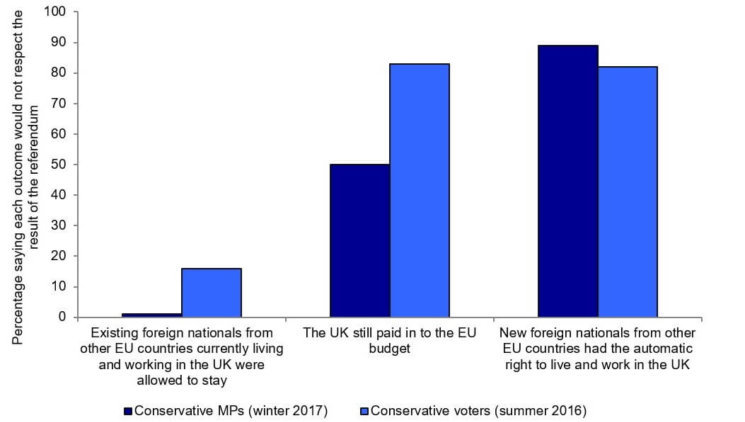 Similarly, 89 per cent of MPs and 82 per cent of voters said that giving new EU migrants the automatic right to come to Britain would not respect the result.

The second chart shows the percentage distributions of MPs and voters for prioritising single market access versus controlling immigration. The results were obtained by combining responses from a 0-10 scale, with 0 representing “being in the single market at all costs” and 10 “being able to control immigration at all costs”. Once again, there appears to be much greater support for Mr Rees-Mogg’s vision of Brexit among both MPs and voters. 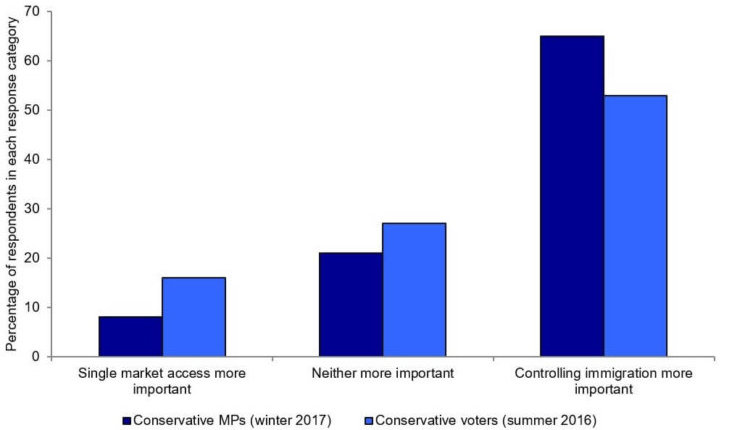 An important caveat is that pro-Leave MPs seem to be somewhat overrepresented in the poll — 55 per cent of Conservative respondents said they voted Leave. Yet according to the spreadsheet compiled by the website Guido Fawkes, only 43 per cent of Tory MPs declared their support for Leave prior to the referendum.

On the other hand, insofar as the poll was self-selecting, this discrepancy may suggest that they feel more strongly about Brexit than their pro-Remain counterparts.

Another important caveat is that the poll from which the voter figures were taken is nearly 18 months old. It is therefore quite possible that the chart overstates their support for controlling immigration.

Indeed, I have previously said that support for soft versus hard Brexit changed non-linearly from the summer of 2016 to the summer of 2017. Rob Ford, the political scientist, has demonstrated that attitudes to immigration have actually softened since the referendum, including among Leave voters.

What do more recent polls say about where Conservative voters stand? These arguably bolster the conclusion that such voters are more sympathetic to the hard, Rees-Moggian vision of Brexit.

In a YouGov poll in May last year, 70 per cent of Conservative voters agreed with the statement, “I support Britain leaving the EU, and the government should ensure that Britain does leave”.

In Lord Ashcroft’s poll last summer, 70 per cent of Conservative voters agreed with the statement, “I voted to leave the EU and I now want Brexit to happen as soon as possible”.

Furthermore, in a Survation poll in December, 56 per cent of Conservative voters said that they preferred “a hard Brexit, involving leaving the EU single market and customs union”, whereas only 37 per cent preferred either “a soft Brexit” or “staying in the EU”.

Finally, in a YouGov poll from last month, 76 per cent of Conservative voters agreed with the statement, “The government should continue with Brexit on its current negotiating terms”.

The poll also asked respondents which two things from a list of ten they wanted most from the Brexit deal, and the top choices among Conservative voters were “Britain having control over immigration” (42 per cent), “Britain not having to follow EU rules and regulations” (32 per cent).

Overall, the evidence suggests that it is Mr Rees-Mogg, rather than Ms Soubry, who is more representative of Conservatives. Of course it goes without saying that, in order to win the next election, the party must appeal not only to its own base, but also to the wider electorate.

By Noah Carl, Brexit co-investigator at The UK in a Changing Europe and post doctoral researcher at Nuffield College, University of Oxford. This piece originally featured in Times Red Box.