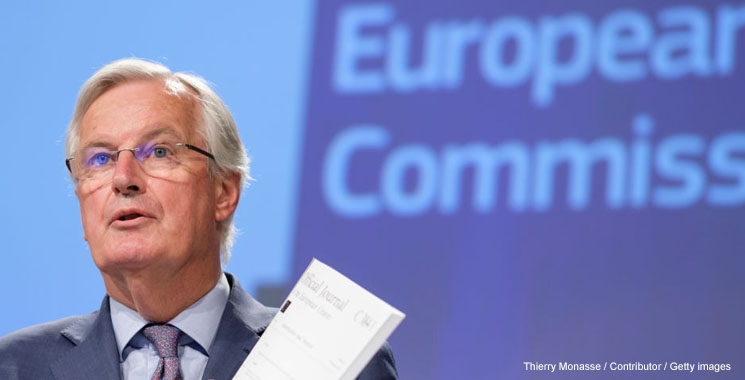 As the deadline of 31 December 2020 for the end of the negotiations between the EU and the UK over trade fast approaches, the world is taken over by another much more serious emergency: Covid-19.

This is something that absolutely no-one could have predicted only six months ago, and even less when the whole Brexit process was put in motion, back in 2016.

It is therefore legitimate, as happens regularly in the public debate, to ask whether Covid-19 will change the positions of the two parties in the Brexit trade talks, maybe bringing an extension of the deadline to reach an agreement.

But answering the question ‘does the Covid-19 crisis make a difference?’ requires us to also answer another couple of related questions: ‘to whom?’ and ‘how?’.

There seems to be, in fact, a lot of clarity already on the stance of the two parties in relation to an extension, and this does not seem to have been affected by the Covid-19 crisis.

Before the pandemic outbreak, the EU’s chief negotiator, Michel Barnier, had signaled the will of the EU to extend the deadline on many occasions – and his offer has since been reiterated.

Even more clearly, however, the British government has rejected the offer, toughening its position, instead of loosening it, and repeatedly threatening to let the talks end without a deal as the health emergency has progressed.

One might speculate that this is just a negotiating strategy on the side of the UK, designed to maximize its interests before caving in and finally accepting an extension.

Much is indeed at stake for the UK in the course of the three scheduled negotiation rounds, after which, between June and July 2020, the decision to extend the transition period will have to be taken.

There are three main contentious issues dividing the UK and the EU. The most important, and least resolvable is the so-called ‘level playing field’.

This refers to the adoption of the same rules with respect to workers’ rights, environment, brand protection, security and the quality of products.

The EU insists these rules are shared between the two trading partners to avoid any unfair competition on the side of London.

London, on the other hand, wants total freedom to be able to craft its own rules – as this could be an important element of future trade negotiations with other partners, such as the US.

The second point of contention is the fight over fishing. The EU would like to keep fairly open access to British waters after Brexit, given their fishing potential.

There are many fishing companies in northern EU countries, as well as in France, for which fishing in British waters is vital. The Johnson government is set to limit the access of foreign commercial fleets to its waters substantially, following to the so-called method of ‘zonal attachment’.

This is an agreement similar to the one already in place between the EU and Norway, which uses annual estimates of the fishing pool to regulate access.

On this issue it is not unlikely that a satisfactory agreement can be found.

As at least two of those issues are very unlikely to be resolved by 31 December, a no deal seems to be a very distinct possibility, especially in the wake of the crisis of Covid-19.

Indeed, if the UK wants to react effectively and quickly to the economic recession ensuing from the lockdown, it needs to keep as much regulatory freedom as possible. This makes it impossible for the UK to adopt the level playing-field or to continue with the jurisdiction of the European courts.

A V-shaped recovery of the British economy will impinge on the utmost flexibility of the labour market, including in the use of migrants, on the technological revolution of services, especially financial services and fintech, as well as a total commitment by the Bank of England to support the Treasury’s expenditure.

Thus, in answering the question of how the Covid-19 crisis has affected, and will affect, the future trade talks, one can come to the conclusion that, at least for the UK, it makes an extension less viable and a no-deal outcome more likely.