Does the UK win or lose in the Council of Ministers? 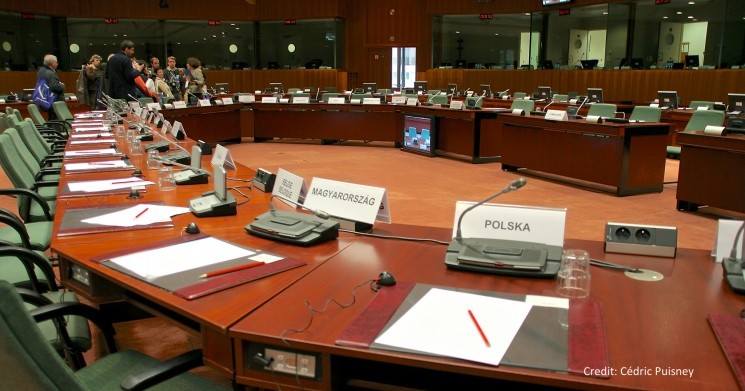 This is the second in a series of pieces on the issue of whether the UK is “marginalised” in EU decision-making, as part of the UK ESRC’s UK in a Changing Europe programme. Each contribution uses existing or new data to assess the factual evidence of how the UK is positioned in EU politics. The first piece in the series can be found here.

In this piece we look at the actual record of voting in the EU Council, and this time ask a slightly different set of questions: How often is the UK in the losing minority in votes in the main EU legislative institution? How does the UK’s record compare to other EU governments? And does the UK do better in some policy areas than others?

The data for the analysis come from VoteWatch.eu plus data we have collected from the 2004-09 period. VoteWatch is a not-for-profit organisation which tracks and analyses all recorded votes in the European Parliament and EU Council. For full disclosure, we are two of the co-founders of VoteWatch and are both pro bono members of VoteWatch’s board.

Our dataset includes all votes that took place in the EU Council between 1 July 2004 and 1 September 2015.  Formally the ministers of the EU governments (who meet in the Council according to their policy portfolios) vote on all legislative decisions that come before them. Also, for most policy decisions, votes are now taken by a “qualified majority vote”, which is a system of majority weighted voting, where each government has a bloc of votes in proportion to its population size.

In practice, though, most decisions are agreed by “consensus”, meaning that member state representatives work together to seek an agreement that all countries will be able to support. As a result, most votes are recorded with either no or only few countries abstaining or opposing legislation. Currently, between 20-25% of legislation has some form of opposition recorded by either a single or group of member state governments. “Opposition” comes in two forms: a government either formally records a No vote, or chooses simply to Abstain. We hence count both abstention and negative votes as failure to publically support a majority view.

Another issue to note is that because the UK has opted out of some policy areas – namely economic and monetary union, and some aspects of the free movement of persons and migration policies (in the Schengen agreement) – the UK has participated in fewer votes than some other member state governments.  For example, in the 2009-2015 period the UK participated in 702 of the 737 votes in this period. In comparison, Germany and France participated in all 737 votes while Denmark, who has more opt-outs than the UK, participated in 682 votes.

So, what does the evidence tell us about a possible marginalisation of the UK in the EU’s main decision-making body?

UK is on the losing side most in the EU Council

Figure 1. Per cent of times in losing minority 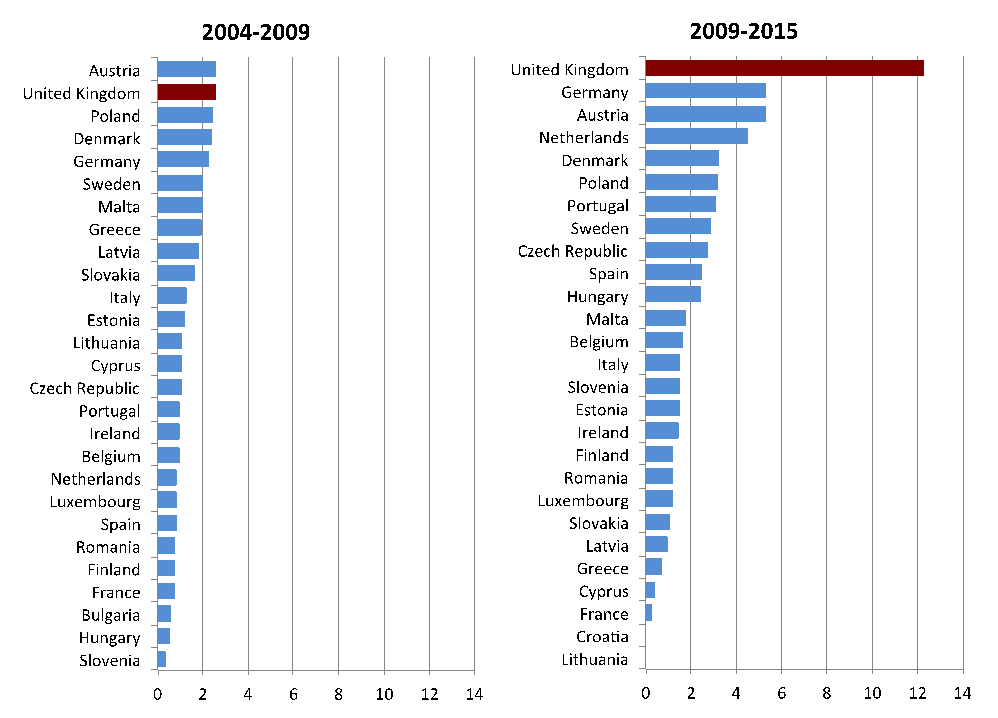 Two things are immediately striking. First, there was a big increase in the level of conflict in the Council between 2004-09 and 2009-15, with many more governments voting No or Abstaining in the latter period than in the former period.

Who are the UK’s allies?

Digging a bit further into the 2009-15 data, we can look at which other governments most frequently voted with the UK. This is shown in Figure 2. The UK’s main allies in this period were some of our northern European neighbours – Sweden, the Netherlands, and Denmark – while the German government was least likely to vote the same way as the UK. In fact, the UK and German governments voted on opposite sides 16% of the time. In other words, the two governments who were most likely to vote against the majority (the UK and Germany) were invariably in opposition on different votes. Meanwhile, perhaps surprisingly, in this period the UK government voted more frequently with the French government than the Irish government. 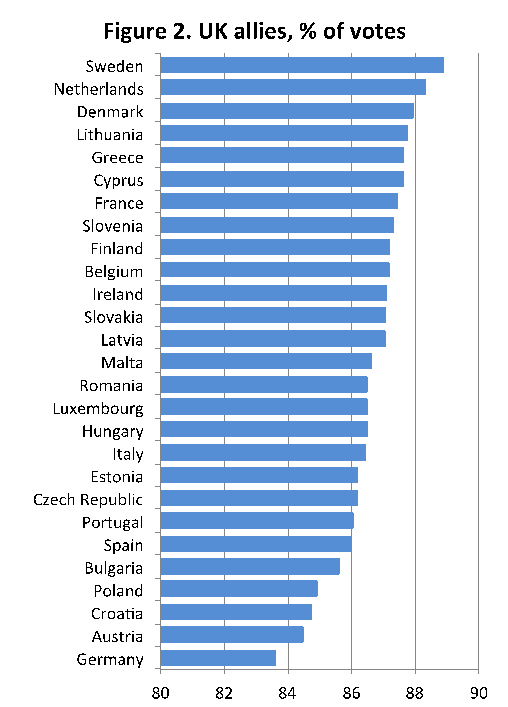 These aggregate patterns might be distorted by the fact that there were more votes on some policy issues than on others, and perhaps the UK was more likely to be on the opposition side in particular areas. To investigate this we can break the 2009-15 votes down by policy area, for all areas where at least 10 recorded votes were recorded. As Figure 3 shows, the UK voted against the majority more frequently on budgetary policies, foreign and security policy, and international development, and voted with the majority more frequently on international trade, industry, environment, transport, legal affairs, economic and monetary union, and internal market policies. In most policy areas, the UK was again the member state most likely to vote against the majority, and significantly more likely than the average government in the EU. Nevertheless, the UK was not the most oppositional government on several important issue areas: internal market, legal affairs, transport, environment, and fisheries. 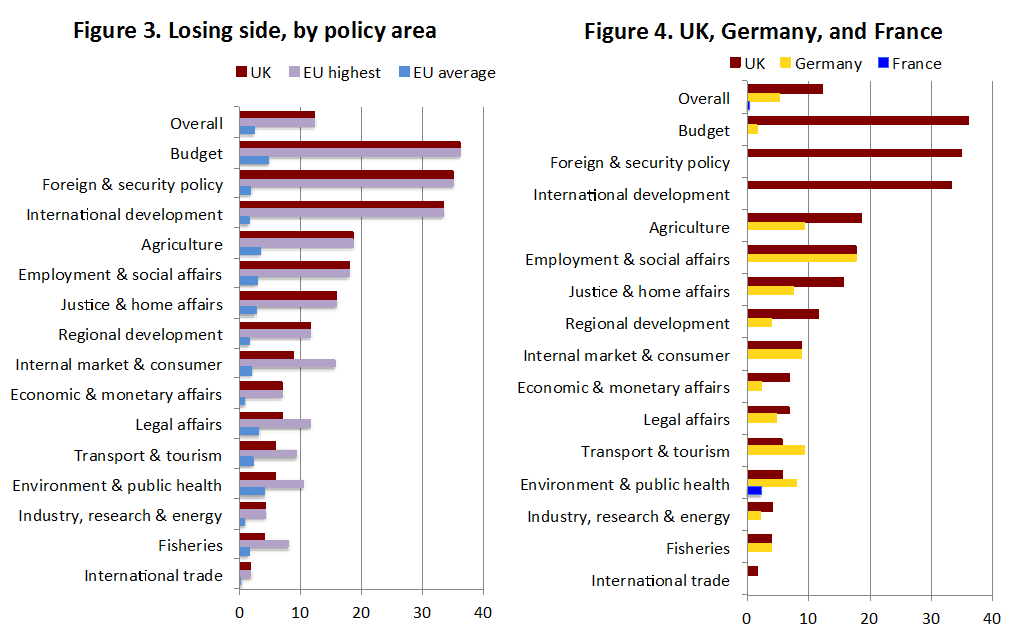 Figure 4 shows the UK numbers in comparison with the other two largest member states: Germany and France. In general, France almost never voted against the majority, preferring to accept a consensual outcome even when it might have opposed the majority view. However, the German government was more often on the losing side than the UK government in the areas of environment and transport, and was as frequently against the majority as the UK on employment and social affairs, internal market, and fisheries.

In sum: UK on the losing side, but…

In short, the official voting records of the EU Council suggest that there has been a significant shift in the positions on the UK in the Council between 2004-09 and 2009-15. In the latter period the UK government has voted more often against the majority, and is hence now on the losing side more often than any other EU government. There is some variance across policy area, the UK has some powerful allies, and Germany also often votes against the winning majority. Nevertheless, on average, these data suggest that the UK government has often had to accept policy outcomes from the EU for which it did not vote.

Nevertheless, there are some important caveats against inferring too much from this evidence.  First, overwhelmingly the Council decides by consensus, as very few votes are taken, and even when votes are taken the UK is on the winning majority side almost 87% of the time.

Second, unlike some other governments, the UK government might be more willing to publicly register its opposition to EU decisions by having its minority vote recorded (for domestic consumption or to signal its opposition to the Commission or the European Parliament for future rounds of negotiations) whereas some other governments might prefer to go along with the majority despite having more serious reservations than the UK.

Third, and related to this point, these data do not tell us what went on behind the scenes on each of these issues, and hence how much the UK disagreed with the majority position when it recorded its opposition – perhaps the UK was on the winning side on all the key issues it really cared about in this period.

Finally, for a fuller picture of the success or marginalisation of the UK in EU decision-making this evidence needs to be put together with other types of evidence, such as the actual bargaining over policy outcomes (which was addressed in the first post), and votes and bargaining in the other main legislative body in the EU: the European Parliament (which will be addressed in future posts).

For example, UK opposition in the Council might not be too costly if the UK MEPs won concessions or were on the winning side when the legislation was amended in the European Parliament.  In addition, the UK government can also seek to influence politics in the European Council – where Heads of States and Governments meet – and through its representatives in the European Commission.

Yet, in this post we have shown how the UK has clearly become more ‘assertive’ when it disagrees with the majority view in the EU Council in the last few years.

Sara Hagemann is Assistant Professor in European Politics at London School of Economics and Political Science.

The third piece in this series focuses on whether the UK is at the top table in EU negotiations and can be found here.