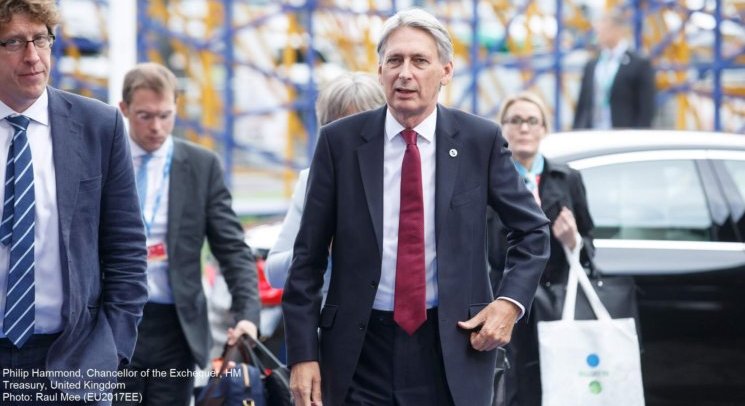 Split the difference. In most negotiations it is the three-word formula most likely to be adduced, obliging both sides to make some concessions in the interests of concluding an agreement. The allure of ‘soft’ Brexit is easy to understand because it respects the referendum result by taking the UK out of the EU, but ensures the economic costs and risks are kept to a minimum.

Those holding out for a more comprehensive break with the EU are then portrayed as playing with fire by creating obstacles to trade with our biggest market, putting jobs and growth in jeopardy. In his Mansion House speech, delivered on 21 June, Philip Hammond tried to play down the differences between his view of Brexit and those of some of his cabinet colleagues.

He told us the Treasury under his watch as Chancellor is not (his inverted commas) “the enemy of Brexit” as has apparently been briefed by other ministers – you can guess who. Instead, Hammond’s Treasury will be ‘the champion of prosperity for the British people outside the EU, but working and trading closely with it’.

Although the language is both emollient and positive about what life outside the EU can offer, phrase after phrase emphasises staying very close to the EU. Thus, Hammond wants ‘a new relationship with our European neighbours that protects those patterns of trade; those business relationships that have been painstakingly built over decades’.

It will be one which ‘maintains low friction borders and open markets’ and, tickling the tummy of his audience in the City, ‘enables UK EU financial services trade to continue’. In staccato sentences, he recalls an earlier speech on ‘a future financial services partnership’ with the EU:

Strip away the rhetoric and the message is clear: the UK’s fundamental economic interest lies in staying in the single market. The main advantages of staying close to the EU are limiting the short- to medium-term risks to the economy, as well as the prospect of a viable solution to the Irish border conundrum.

Whisper it, however: Boris Johnson, Jacob Rees-Mogg and their acolytes may well be correct, at least on the politics of the choice. Soft Brexit translates into retaining much of what constitutes EU membership and would not be the decisive break implicit in the decision to leave the EU.

Staying in either, or both of, the customs union or the single market would mean accepting EU regulations, the jurisdiction of the European Court of Justice, paying towards the EU budget and – probably – either very preferential treatment or complete free movement for EU workers.

It would also limit or even preclude separate trade deals with other partners, rendering Liam Fox’s Department of International Trade redundant.

Although it has become routine to mock the more extreme predictions from the referendum campaign of the economic damage expected from the decision to leave, let alone actually exiting the EU, there can be little doubt the UK economy is looking vulnerable. The slowdown in economic growth has now stretched to five quarters since the end of 2016 and the gap between both Eurozone and G7 growth and that in the UK persists, as the chart below shows.

UK growth compared with the Eurozone and the G7 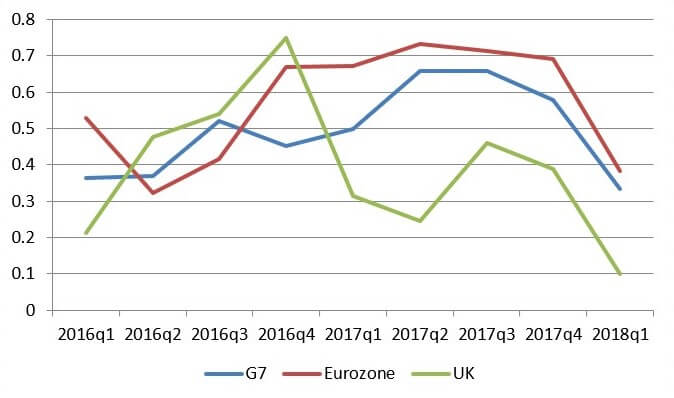 Although Hammond rightly emphasises the continuing strength of the labour market and initiatives to boost the UK’s lacklustre productivity, some of his other claims in the speech are Panglossian.

He tells us ‘investment spending grew at the fastest rate in the G7’, omitting to mention it is still the lowest as a proportion of GDP according to comparative data. There is indeed ‘a current budget in surplus’ – note the careful choice of adjective – but after all these years of supposed fiscal discipline, there is still a public deficit overall.

Major investors – and not just Airbus – are increasingly uneasy about the dither and drift in the UK approach to Brexit and looking elsewhere, and financial intermediaries are transferring a few dozen or hundreds of jobs from the City to other EU financial centres. This is not (yet) dramatic, but nor should such developments be dismissed out of hand. Not all the concerns are cries of ‘wolf’.

The ardent Brexiteers tunnel-vision about the reality of economic risks and the unreality of easy trade deals with other parts of the world is increasingly being exposed as bogus.

Even our supposedly great pals, the Australians, have initiated talks with the EU about a free trade deal likely to have similar terms to the one the EU already has with Canada, and may see this as a greater priority than concluding one with the UK.

Add in the further illusions about a Brexit dividend to be spent on the NHS, not to mention the government’s own rather coyly presented assessments of  costs for most sectors of the economy, and it should be obvious to all but the most obtuse that Brexit will be economically damaging to the UK. The much maligned Arron Banks at least had the honesty to adjudge this to be ‘a price worth paying’.

Equally, supporters of soft Brexit have to realise a country on the outside will unavoidably be a rule-taker with scant opportunity to influence rule-setting. As Ivan Rogers, the former UK ambassador to the EU (until he left in despair at the government’s stance) has shown in forensic detail, there are three main rule-setters at international level: the EU, the US and China. The UK will, broadly, have to align itself with one of the three and would be on a fool’s mission if it sought to go it alone.

What, then, is to be done? The choice has been expressed as one between variants of hard and soft Brexit, starting from the premise that the ‘people have spoken’ in the referendum.

If the result is considered politically untouchable, meaning Brexit has to be delivered (the logical interpretation of ‘Brexit means Brexit’), all the talk about meaningful votes or a second referendum becomes irrelevant.

In the end, splitting the difference will satisfy neither side and be at risk of unravelling. Hard Brexit will be costly, but if that is unpalatable, there is only one real alternative.

By Iain Begg, Professorial Research Fellow at the European Institute and Co-Director of the Dahrendorf Forum, the London School of Economics and Political Science.