Dominic Cummings: can he defy the political laws of gravity? 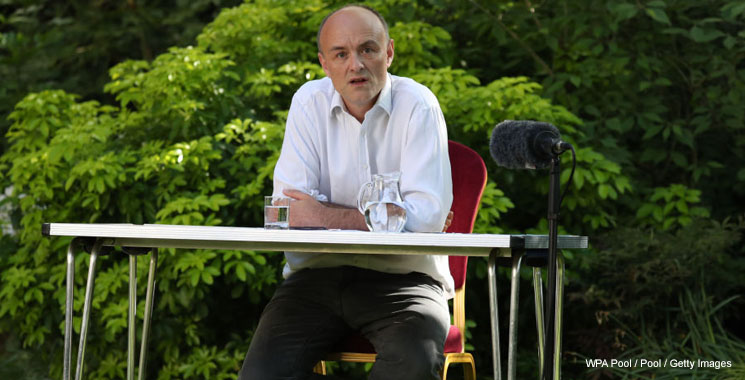 The Prime Minister’s adviser Dominic Cummings doesn’t like to follow the rules. That’s not necessarily a statement on his lockdown-breaking trip to Durham – disdain for established rules, and specifically for conventional wisdom that can’t be directly enforced, is what Cummings has long been known for. For some, it’s seen as part of his ‘genius’.

From flying a giant inflatable white elephant over the north-east during a referendum that destroyed Labour’s plans for English regional devolution, to the audacious ‘£350 million a week’ for the NHS on the Vote Leave battlebus, to the long-planned ‘people versus Parliament’ election of 2019, his boundary-stretching has often proved a winning formula, and delivered for Boris Johnson.

Cummings has long shown particular disdain for traditional political institutions, and their old ways of doing things. He’s well-known for wanting to pursue radical reform of the civil service.

Conservative Brexiteer MP Steve Baker, who was among the first to call for him to quit, credits Cummings with Johnson’s attempt to prorogue Parliament for five weeks, which was overturned in the Supreme Court.

That move, like several others associated with Cummings, indicated his view that conventions, or the ‘accepted way of doing things’ count for nothing, while all that matters is the letter of the law.

Other examples include suggestions to ‘pack’ the House of Lords with hundreds more Brexit-supporting peers, or to advise the Queen not to sign a rebel bill into law.

Indeed ‘Downing Street sources’ went even further late last year, suggesting that Johnson might refuse to abide by a law passed by Parliament.

Parliament has often been a clear irritant to Cummings. Remarkably, he was appointed to his Downing Street role despite having been formally found ‘in contempt of Parliament’ over his refusal to attend a select committee to discuss the actions of Vote Leave.

A recent comment from a ‘friend’ of Cummings to the Financial Times suggests similar contempt for other key bodies, noting that ‘if he drags the Tory party down to below the Green party in the polls, he doesn’t care… He’s not a Tory, he has no party allegiance, he does not rate anyone in the Cabinet’. And he certainly doesn’t rate the views of Tory MPs, as discussed below.

One long-accepted unwritten rule in British politics is that when the adviser becomes the story, it’s time for the adviser to go. That’s become another maxim which Cummings, and Johnson, seem determined to disobey.

Like so much else that Cummings has done, this is audacious – but potentially, if the media were his only adversaries, it might just work. However, he has also run up against a more fundamental, indeed foundational, rule of British politics: that every government depends upon its MPs.

While some rules can be flouted, this one’s more like the law of gravity – it’s simply how the system works.

We are a parliamentary, not a presidential, democracy, and hence ministers are only there thanks to Parliament’s support. This means prime ministers can’t deliver policy, or even in the end survive, without the support of their own backbenchers.

And yet Conservative MPs are currently very far from happy. At least one in four has spoken out publicly against Cummings, with many explicitly calling for him to go.

Former Health Secretary and chair of the Commons Health Select Committee Jeremy Hunt suggests that ‘what he did was a clear breach of the lockdown rules’.

Chair of the 1922 Committee Sir Graham Brady advises constituents that ‘this was certainly not in keeping with the spirit of the government’s message’ and that he recognises their ‘outrage’.

Even former Prime Minister Theresa May has said that she does ‘not feel that Mr Cummings followed the spirit of the guidance’, and that she ‘can well understand the anger’ of those who have.

Most MPs are principled and decent people, and doubtless most speak on this from the heart. But some will also have in mind the catastrophic polling results now emerging, with both the Daily Mail and Observer finding that 80% of the public believe Cummings broke the rules, while two-thirds (including a majority of Conservative voters) think that he should go. The Prime Minister’s own ratings, and those of his party, have plummeted.

So can Cummings be the genius who defies the political laws of gravity, and stays on despite unprecedented criticism from the very people upon whom his own boss ultimately depends to keep his job?

He seems determined to try. Today Parliament returns, with MPs no doubt eager to express their displeasure. For things to reach this point is extraordinary; in previous similar situations the adviser in question would have gone long before now.

Conservative MPs realise that their own integrity, their jobs, and likely the credibility of the government’s health messages in the crisis, could hang on what happens next.

What all involved must remember is the significant power that MPs hold over the Prime Minister. They don’t just have to accept what he chooses – the fundamental truth at the heart of the system is that they are ultimately in charge.

And, if they feel the need, there are ways in which they could remind Johnson of this reality. If, for example, Cummings’ opponents simply chose to abstain on government business until he departed, policy would not be able to progress.

In other words, defiance of this fundamental rule of British politics can succeed only if MPs themselves acquiesce.

Should they choose this path, there is of course a bigger underlying fundamental – that MPs are themselves accountable to the public, and the loss of their constituents’ support could result in them being the ones who are swept away.

By Meg Russell, senior fellow at The UK in a Changing Europe. This piece was originally published on the Constitution Unit blog.