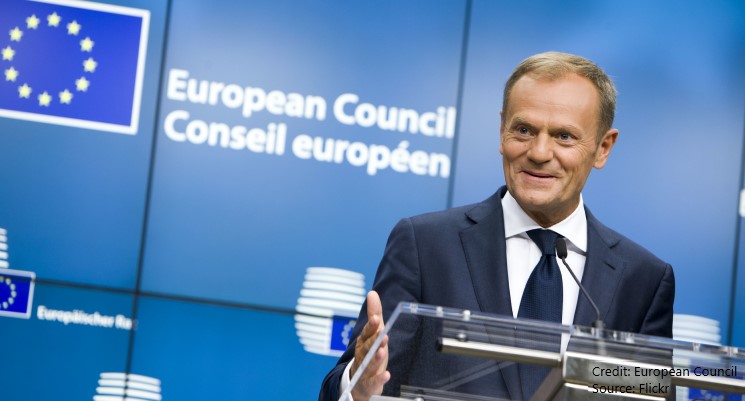 As his five-year term as President of the European Council neared its close, Donald Tusk was characteristically outspoken in his final set-piece speech, delivered at the College of Europe in Bruges on 13 November.

He once again expressed his regret at the outcome of the 2016 referendum, challenged the ‘global power’ rationale for Brexit, and exhorted supporters of Remain to continue their fight.

His colourful tone, which courts controversy for some, but for others is an example of welcome plain speaking, has been feature of the Tusk presidency.

A different kind of president

Tusk is only the second so-called ‘permanent’ President of the European Council – the body that brings together the heads of state and government of the EU’s member states.

Historically, the presidency of the EU’s supreme political institution had rotated between national political leaders on a six monthly basis, but the view spread among the member states that this arrangement no longer delivered the necessary stability or capacity for forward planning.

To ensure the continuity necessary for the European Council’s work, the Lisbon Treaty, effective from 2009, provided for the appointment of a president by the members of the European Council to serve a two-and-a-half year term that could be renewed once.

The first person to hold the position was Herman Van Rompuy. Well-known as a deal-maker and compromise-seeker, Van Rompuy preferred to work discreetly behind the scenes. As a former Belgian PM, he was particularly oriented to Berlin and Paris.

Donald Tusk, a former Polish PM, brought to the office a different cognitive map, and in particular a strong awareness of the perspectives, preoccupations and concerns of the Central and Eastern European member states.

He also has a very different approach to communications. Like his counterpart in the White House, President Tusk has been happy to broadcast his personal views through social media.

Tusk has made no attempt to hide his feelings on Brexit. Prior to the UK referendum, in September 2015, he commented that: “As a historian I fear that Brexit could be the beginning of the destruction of not only the EU but also of western political civilization in its entirety”.

In the midst of Theresa May’s travails, in February 2019, Tusk wondered aloud “what the special place in hell looks like for those who promoted Brexit without even a sketch of a plan how to carry it out safely”.

On the eve of his first meeting with Boris Johnson, in August 2019 Tusk tweeted: ‘I hope that he will not like to go down in history as “Mr. No Deal”.’ Such interventions are not conventionally diplomatic.

In the words of his Bruges speech, “I did everything in my power to avoid the confrontational no-deal scenario and extend the time for reflection and a possible British change of heart. I have been called a romantic and an anglophile, both terms, in my opinion, quite suitable and merited”.

As European Council President, Tusk has been one of the main architects of the unity shown by the EU institutions and among the other member states – the EU27 – in the wake of UK referendum result.

While relations between the institutions could have been tense and difficult, Tusk has worked closely on the issue with the President of the European Commission, Jean-Claude Juncker, and also with successive Presidents of the European Parliament, Martin Schulz, Antoni Tajani, and David Sassoli.

The joint statement issued by the leaders of the three institutions on the morning following the UK referendum was an early example, although the habit of close inter-institution cooperation arguably had been established earlier during the talks surrounding David Cameron’s ‘negotiated settlement’, which preceded the June 2016 vote.

Tusk has also been a key player brokering unity among the EU27. Again, preparations began before the results of the referendum were announced.

The President of the European Union was able to announce his regret, but also to highlight how the EU intended to respond to the vote on the morning of 24 June 2016.

Two days later, when the European Council convened for the first time without the UK, it adopted a statement that outlined the four principles to which the EU and the EU27 have adhered to subsequently: that there would be no negotiation with the UK before notification was received from London that it was triggering Article 50; that the four freedoms of the single market would be indivisible; that the UK would not be allowed to cherry pick; and that the EU would negotiate as a single entity.

The European Council, under the leadership of its president, has continued to play a leading role throughout.

It decided that the European Commission would conduct negotiations with the UK on the EU’s behalf, and repudiated attempts by Theresa May to negotiate directly at the ill-fated Salzburg summit in September 2018; and it was also responsible for defining the Commission’s negotiating mandate.

It has monitored negotiations closely and taken the decisions to grant the UK an extension beyond the original 29 March 2019 deadline in March 2019, April 2019 and in October 2019.

With very few exceptions, the political leaders of the EU27 have presented a united position in support of the stance agreed in 2016.

What some in the UK have interpreted as inflexibility, others have read as clarity of purpose.

On the EU side in general, and in the Council specifically, it was felt that in the face of a development as grave as the departure of a member state, the EU had to be seen to be conducting ‘business as usual’ and that it had to protect interests perceived as existential.

Although the EU is on stable footing today, the picture when Tusk entered office was not so clear.

In his Bruges speech, Tusk reflected on the unity as the message of his handover speech in 2014 and as the leitmotif of his presidency in the face of the Kremlim’s aggressive policy to weaken the EU, a renewed threat of Grexit from the eurozone, the refugee crisis, and Brexit.

Even though it remains possible that the UK could leave the EU as early as January 2020, Tusk noted that in this area EU unity had been preserved: “Brexit hasn’t divided us. The EU27 have maintained extraordinary self-discipline and loyalty among themselves, despite London’s attempts to “bilateralise” these negotiations”.