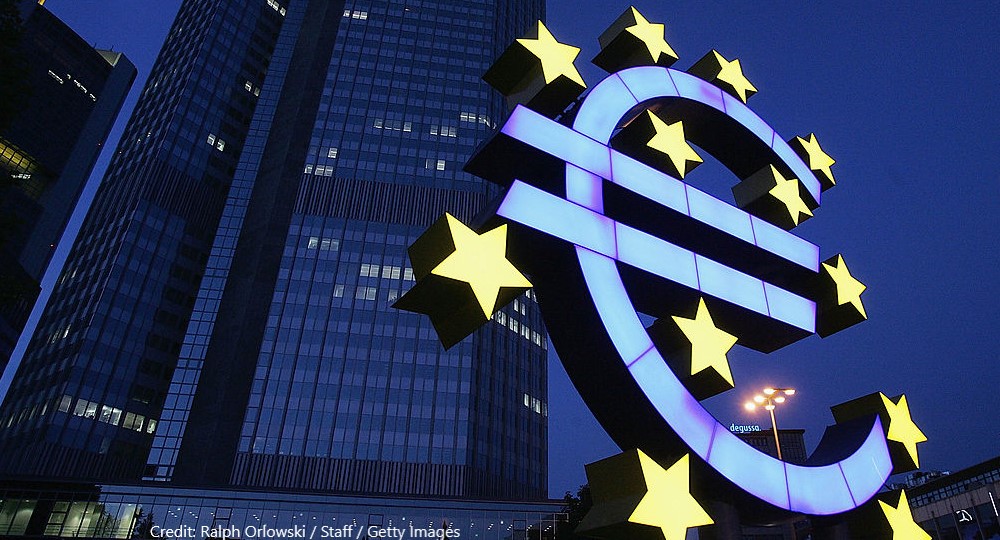 As lockdowns ease across Europe and the drive to vaccinate reaches ever further into the adult population, there is good reason to be optimistic about the prospects for economic recovery. The major forecasters have been quick to upgrade forecasts for GDP growth.

Having taken extensive actions to shield their economies from the worst ravages of the pandemic, political leaders can congratulate themselves on managing what could have been a much more damaging economic crisis. Unemployment rates have barely increased and, although some sectors continue to struggle, the outlook for most is promising.

Certainly, both corporate and public debt have spiralled, but consumers denied the ability to spend for so long are itching to flash their credit cards. What could go wrong?

The answer is ‘plenty’ unless policymakers handle the next few quarters deftly, because difficult ‘exit’ dilemmas have to be confronted.

Recall the exceptional steps taken to shore-up economies in 2020. The EU quickly suspended its rules on fiscal deficits and restrictions inhibiting the use of state funding to support companies (state aids, in the jargon). Finance ministers everywhere took advantage to splash the cash.

The European Central Bank launched its Pandemic Emergency Purchase Programme, ramping up its buying of bonds as a way of keeping credit conditions benign. In the process, interest rates went negative: yes, that means if you deposit money with the ECB, you will be given back less than you started with.

In addition, the agreement of the Next Generation EU recovery package broke new ground by enabling the European Commission to borrow directly from financial markets to fund grants and loans to member states. This pooling of risk meant national treasuries did not have to add these amounts to their own debt burden.

Governments had to develop plans for how the funds will be used and steer a substantial proportion of the money to ‘green’ and ‘digital’ investments. As such, they are not conventional short-term fiscal stimulus packages on the lines of the Biden administration’s ‘American Recovery Plan Act’, approved in early March this year, with large sums going directly to households within days.

On the 13 July 2021, full approval was given for the plans of 12 of the 27 member states and the rest should follow before long. As these plans are turned into actual spending, economies will receive an additional boost and, if successfully implemented, could help to strengthen the supply-side of economies.

Why, then, are there reasons to be worried about the exit from the pandemic-induced economic crisis, even taking an unabashedly optimistic view of the risks of further infections? The key word is ‘normalisation’: what happens as policies return to the unexceptional?

Just as the key to defeating Covid-19 is to vaccinate faster than the virus infects new victims, reducing public debt requires the denominator of the debt to GDP ratio to rise faster than the numerator.

An added twist is that this has to happen before any normalisation of interest rates, even cautious, amplifies the pressures on public deficits because of the need to service the debt.

So far, the ECB shows no inclination to curtail its bond buying, let alone raise its interest rate. It has also announced a revised monetary policy strategy which includes a somewhat less strict interpretation of its price stability target.

As a result, normalisation of monetary policy is likely to take longer. Hence there is breathing-space, but it may not last long and when it is exhausted the risks may rise sharply.

However, German critics of easy monetary policy are becoming more vocal, for example in a call published in the Süddeutsche Zeitung for a return to pre-crisis monetary orthodoxy: ‘to make the euro area sustainable, a functioning, rules-based, controllable and enforceable set of rules is necessary, enforceable with penalties’.

Irrespective, the euro area’s economic governance framework, already subject to growing criticism prior to the pandemic, will need to be recast.

During the years of turmoil starting with the first Greek bailout in 2010, far-reaching governance reforms were introduced, largely aimed at imposing stricter fiscal discipline on delinquent member states.

There have been loud signals from many quarters proclaiming no return to austerity policies. Indeed, Chris Giles of the Financial Times interpreted the 2020 autumn meetings of the IMF and the World Bank as ‘the week we witnessed the funeral of austerity’ and reported the message from the IMF to its members to be ‘to issue debt and to spend without the threat of austerity later’.

Less clear is what will be put in its place.

Rules, fiscal discipline and intrusive monitoring by the European Commission may be out of fashion, but they served two distinct purposes: providing a degree of coordination of the fiscal policies of member states and encouraging governments to aim for sustainable public finances.

In this context ‘sustainable public finances’ is a slippery concept. The norms familiar to euro watchers – a deficit of 3% of GDP and a debt to GDP ratio of 60% – date from 30 years ago and are, arguably, no longer helpful in an era of very low interest rates when the servicing of higher levels of debt can be ‘afforded’ – if, that is, financial markets do not rebel.

Moreover, the EU’s rules and procedures remain on the statute books. They have been suspended, not rescinded, and there will soon be demands to end the resort to the ‘general escape clause’.

Two French economists, Philippe Martin and Xavier Ragot, have called for caution, and suggest both delaying until a new fiscal governance framework is in place and taking decisions on a country-by-country basis. One wonders how many of their German peers would agree.

Simply, the risks from the surge in debt levels because of the pandemic cannot be ignored, and, if neglected, the divergences among members will again be a source not just of political friction, but also economic stress. As the chart shows, the figures are stark.

For the euro area as a whole, public debt jumped by 16.5 percentage points to reach 102% of GDP, and rose everywhere. But it is the contrast between the ‘south’ – not just Greece (high, but mitigated by most of its liability being to official creditors), Italy and Spain, but also France – and the ‘north’ led by Germany and the Netherlands which is likely to spell trouble. 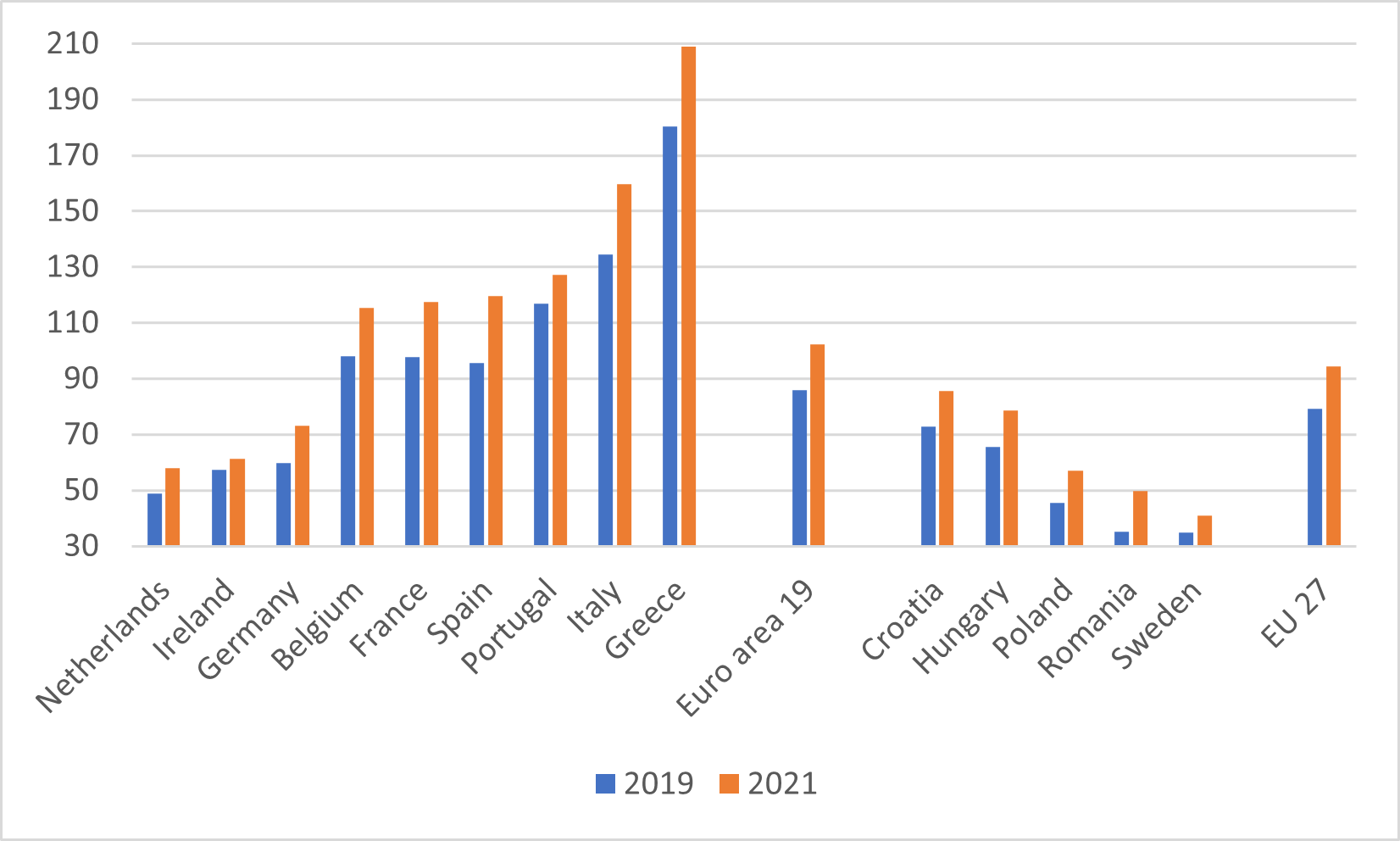 Albert Einstein once said ‘I never think of the future. It comes soon enough’. Europe’s leaders should ignore his advice and start thinking now about how to manage what promises to be a difficult recovery and exit from the crisis.