Economics of Brexit: the aftermath

The UK’s decision to leave the EU is a watershed event. It may bring to an end the free movement of labour and limit the free trade of goods and services between the UK and EU. This follows hot on the heels of the fragmentation of international finance in the aftermath of the global financial crisis. How world leaders respond will determine whether Brexit is a set-back to globalisation, or part of deeper retrenchment.

Economic analyses of Brexit are mostly about the medium term. The UK has chosen to be less economically integrated with the rest of the EU. This is likely to lead to lower levels of migration and trade. As a result the economy is likely to be less specialised and less productive with lower levels of investment. These are all standard supply side effects.

Because there are no plans for the UK to re-join the EU, the lower level of productivity and output are likely to be permanent. This means that each year output or GDP is likely to be lower than it would otherwise have been if the UK had remained in the EU. After the full economic adjustment, the impact of Brexit is on the level of output and not the rate of growth of output.

Of course, to transition from current levels of output to the expected lower level of output implies a change in economic growth rate in the interim. But this may be modest. For example, the consensus medium term projection is that output in 2020 will be 3% lower than otherwise. This implies economic growth is 0.76% per year lower than otherwise during the transition. This is large, but not obviously a recession. For example, using the Office of Budget Responsibility’s last forecast of 2.1% per year for the rest of this decade, this implies 1.3% growth to 2020.

Why then, so much angst? According to a Bloomberg poll almost three-quarters of market economists surveyed expect the UK to have a technical recession (two consecutive quarters where output falls) in the next eighteen months. This raises a question: what is it that economic modellers who focus on fundamentals might be missing, that market economists are so concerned about? The stock answer is that businesses and investors dislike ‘uncertainty’ and that this is why the economy faces a probable recession.

There is no single metric of uncertainty. However, a useful measure is available from the website policyuncertainty.com maintained by academic economists led by Nick Bloom of Stanford. The UK index reports the share of newspaper articles in the Financial Times and Times of London that discuss economics, policy and uncertainty.

Last week Paul Krugman reminded us that, for all its intuitive appeal, there is little basis in economic theory behind why ‘uncertainty’ leads to lower investment and output. His concern is that many of the claims over the short term consequences of Brexit may be overdone. The response of financial markets appear to be consistent with his point. Measures of risk, such as implied sterling volatility, have fallen sharply since the referendum outcome.

Uncertainty of the type is based on the assumption that the underlying structure of the economy is known and understood. However, Brexit is only the start of a change in legal and economic structure. We simply do not know the UK’s future legal arrangements with respect to migration, trade and investment, when these will be resolved and the policy rules in the meantime. This seems more like the uncertainty Keynes faced in the 1930s when the world economic order was unclear.

If this interpretation is correct, what is the best response of policy makers? First, create the institutions to establish the rules of the game. The Government has to come up with realistic objectives as a basis for continued mutually beneficial engagement with the EU. Second, seek a cooperative approach to the future negotiations with our economic partners. And third, provide some economic stimulus to offset the dampening effect of uncertainty on demand.

The Bank of England has been well prepared and delivered an appropriate stimulus. But it seems we must wait possibly months to formulate a credible new economic arrangement with our largest trading partner. The Chancellor’s decision to cut corporation tax may be seen as an unfortunate example of uncooperative policy making from an EU perspective. Home policy makers have done little to address the deep uncertainty about or future relationship with the EU.

The response of leaders in the rest of Europe has been mixed. Angela Merkel has been impressive and measured. Other leaders have hastily announced that the UK would lose its passporting rights for UK financial services. European banks are in no position to pay higher financial intermediation costs. The priority for both UK and the rest of EU leaders is to remember that economic engagement really is mutually beneficial and establish a cooperative approach to future negotiations. 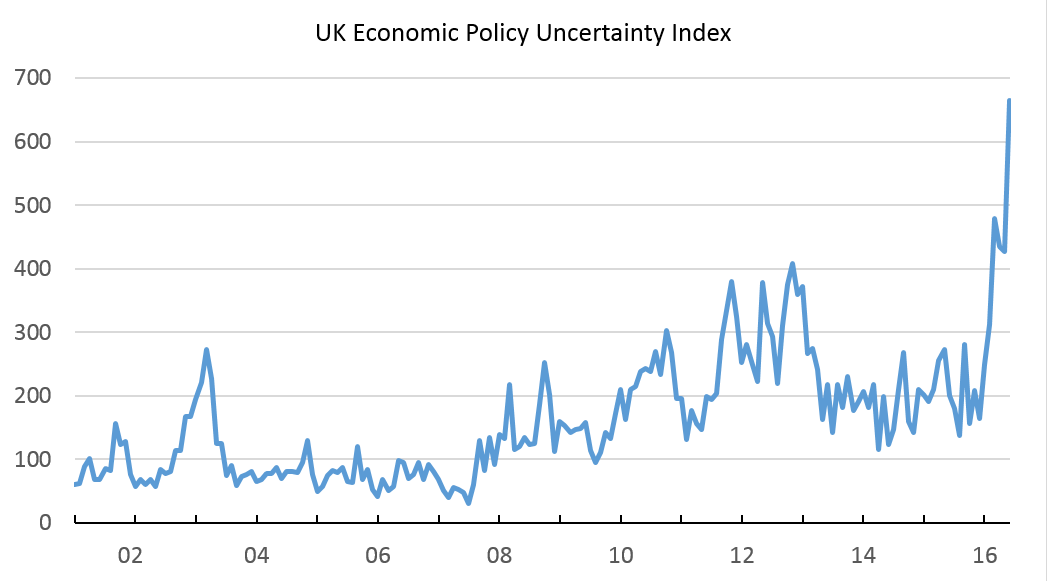 By Dr Angus Armstrong, senior fellow at The UK in a Changing Europe