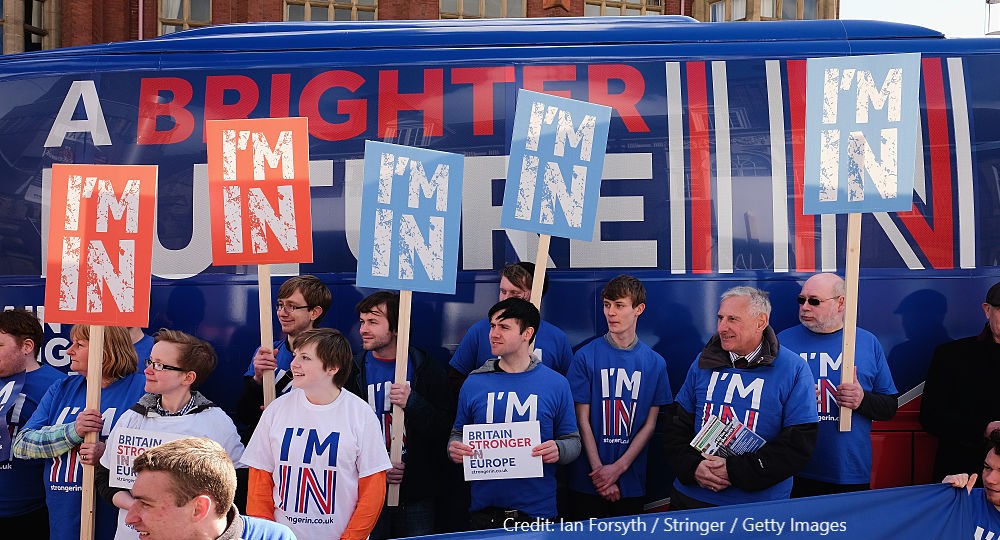 The majority leave vote delivered in the 2016 EU referendum represented a landmark in the UK’s political landscape. Not only did this set the UK on course to become the first country to exit the EU, but the referendum brought the importance of educational attainment in shaping public opinion to the forefront of public debate.

This referendum exposed a dramatic educational divide in voting. Data from the British Election Study shows there was a 40-percentage point ‘educational gap’ in 2016 EU referendum voting.

Why, then, is it that the 2016 EU referendum vote divided so starkly along educational lines? Many influential theories of vote choice stress that socio-demographic characteristics, like educational attainment, do not influence voting behaviour directly. That is, gaining additional educational qualifications, in itself, is unlikely to shape our vote choices.

Rather, educational attainment is thought to shape our voting behaviours indirectly: educational divisions in vote choice are a product of differences in educational groups’ thinking, experiences and behaviours, which, in turn, shape their vote choices (see Figure 1).

In the UK, educational attainment is not only closely related to EU referendum vote choice, but also to individuals’ attitudes, interests, and political information-internalisation behaviours.

This is illustrated clearly in Figure 2. Specifically, we see that more and less educated persons tend differ in three regards.

First, they have varying cultural attitudes, with divergent opinions on issues like immigration, national identity, censorship, and justice

Second, they have different economic orientations – they not only work in different types of occupation, for varying levels of pay and security, but also take different positions on the traditional ‘left-right’ value dimension, which encompasses issues of income inequality and government economic intervention.

Finally, they have different political cue-taking behaviours, in that they subscribe to the populist message to varying extents and prefer different news sources

Could these three types of differences in educational groups’ thinking, experiences and behaviours explain why the 2016 EU referendum vote divided so starkly along educational lines?

In a recent study, I explored precisely this question, considering whether the differences in Leave/Remain voting observed during the referendum for the low (GCSE equivalent or less), intermediate (above GCSE but below degree) and highly (degree) educated were explained by these indirect educational influences. 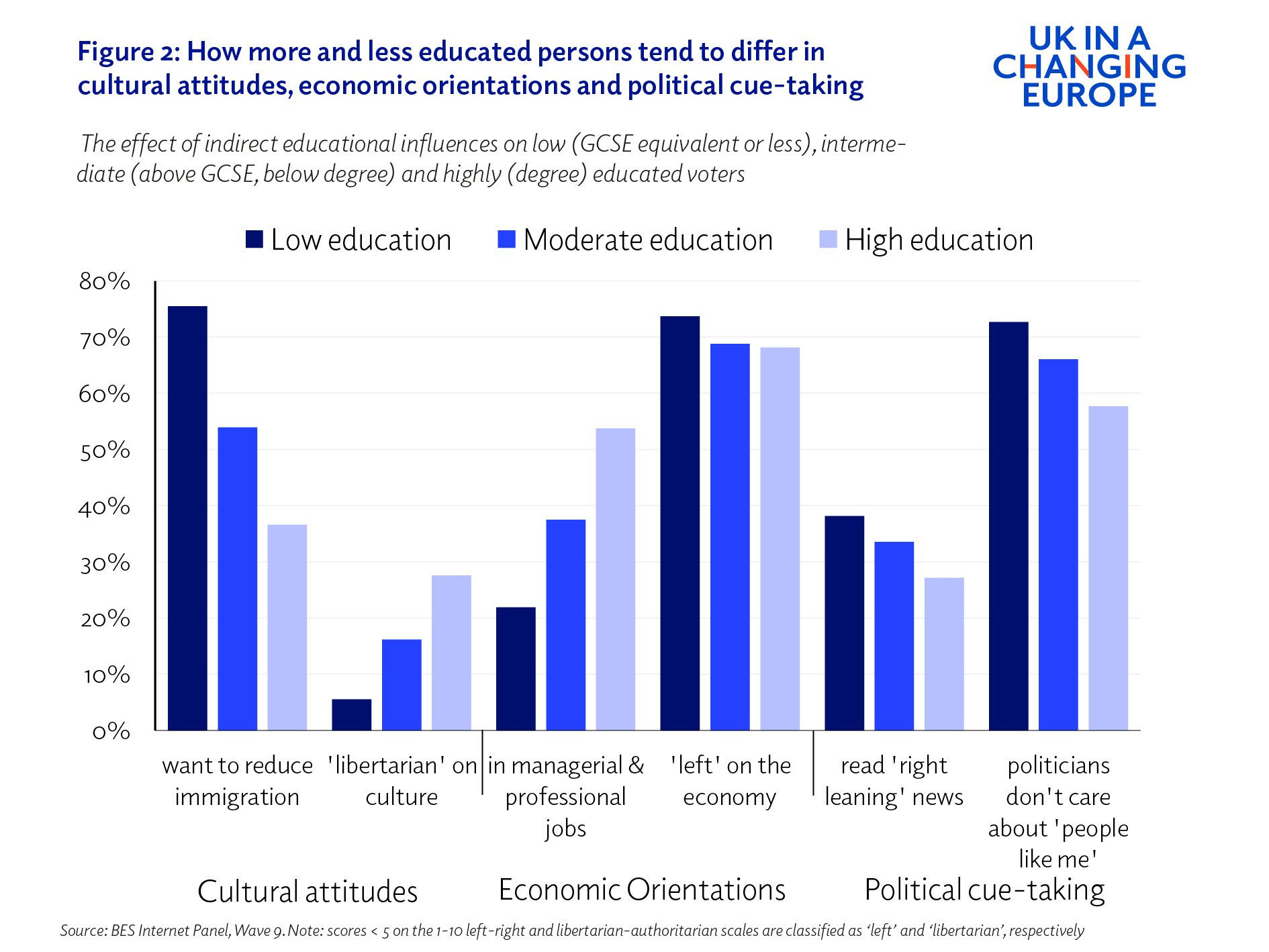 I found that 82% of the total ‘educational gap’ observed in Leave/Remain voting between individuals with moderate and low educational attainment is explained once we account for differences in individuals’ cultural attitudes, economic orientations and political cue-taking (see Figure 3).

A similar proportion – 78% – of the disparity between low and high educational groups’ referendum vote choices is explained by these same factors. Considered together, these three indirect educational influences capture much of the reason why highly, and moderately, educated British individuals more often voted to remain than the least educated. 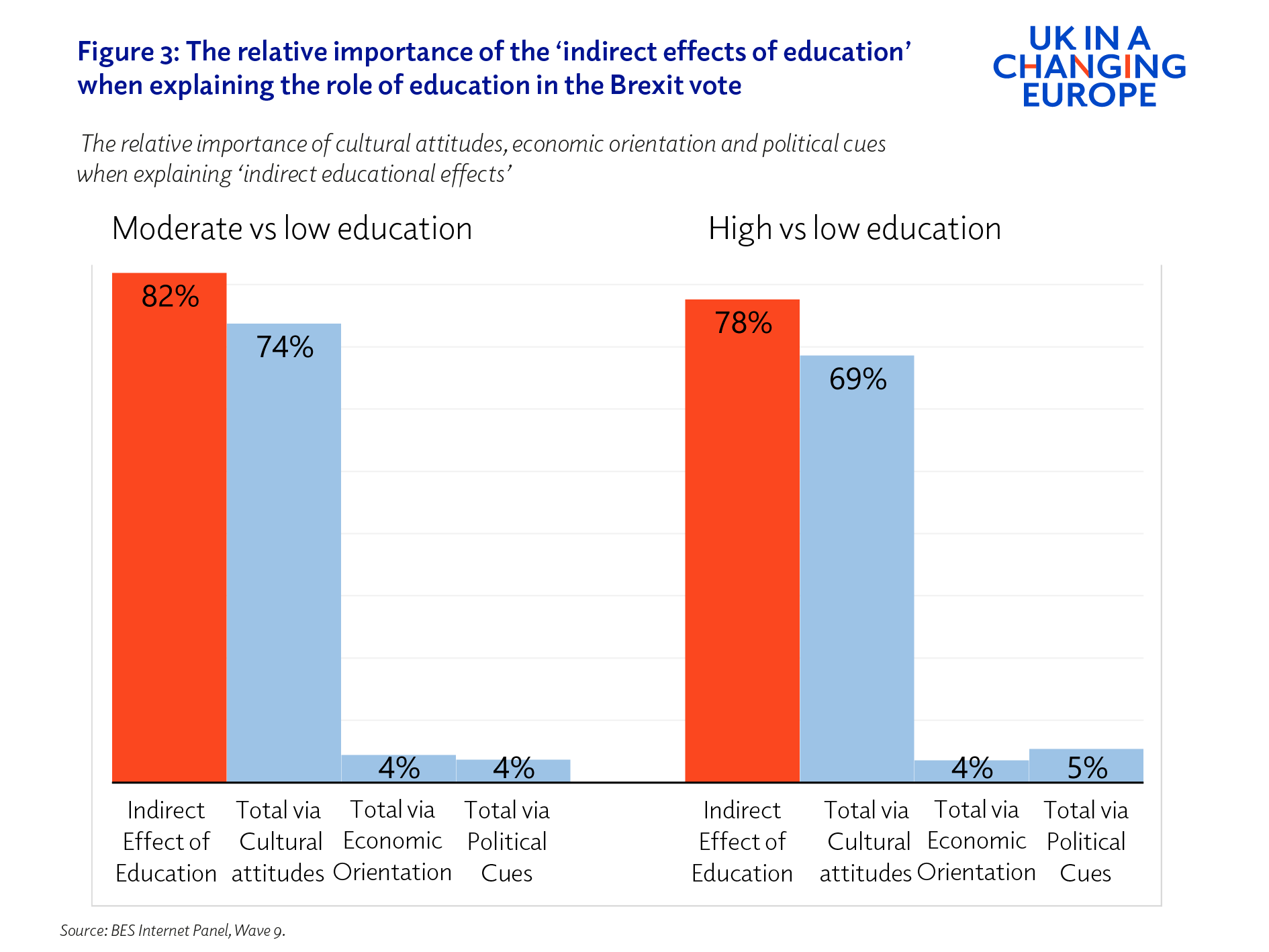 Educational attainment does also appear to have a direct effect on EU referendum voting. Gaining additional educational qualifications remains associated with voting to remain even after accounting for all three indirect educational influences – cultural attitudes, economic orientations and political cue-taking.

However, this direct educational effect is relatively small – accounting for only around one fifth of the overall ‘educational gap’ in Leave/Remain voting. Clearly then, indirect educational influences constitute the most important part of the story in explaining why the referendum vote divided so starkly along educational lines.

The question that follows logically then, is which of these indirect educational influences had the greatest power in explaining the educational divide over EU referendum voting? Figure 3 illustrates clearly that the answer to this question is cultural attitudes.

My research highlights that the educational divide in 2016 EU referendum voting was, to a large extent, a proxy for the ‘cultural values’ divide. Even though the UK has now left the EU, this cultural divide will remain and could be reactivated as new issues become salient.

Better understanding the roots of the stark educational divide observed in EU referendum voting allows us to make some tentative predictions about this divides’ future impact.

For example, the findings of my study indicate that if all else stays the same, British public opinion may trend towards becoming less Eurosceptic over time, as demographic shifts will mean a lesser proportion of the population have low levels of educational attainment, which are closely related to cultural conservativism and anti-EU sentiment.

If more definitive predictions are to be made in this regard though, future work must consider whether it is studying for additional educational qualifications which causes the development of liberal cultural attitudes.

By Elizabeth Simon, PhD student in the Social Statistics and Demography Department at the University of Southampton. Her research focusses on how educational attainment shapes public opinion, electoral behaviour and wider society.