EEA-EFTA: the other withdrawal agreement 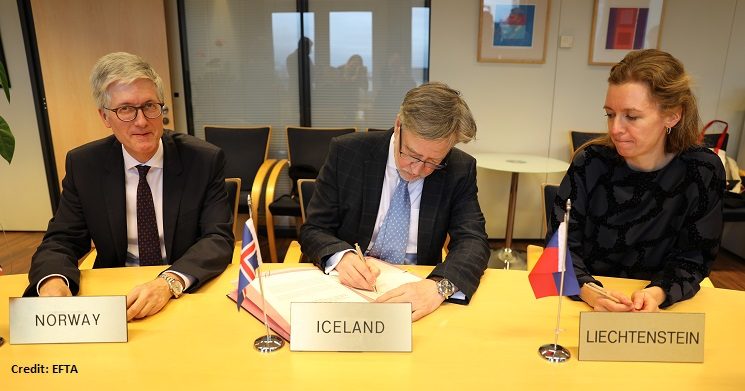 It went little noticed, but on 28 January—three days before the UK left the EU—the government signed another withdrawal agreement. It was not with the EU this time, but with Iceland, Liechtenstein and Norway, otherwise known as the EEA-EFTA states.

The majority of the agreement is more or less a cut-and-paste job from the UK-EU deal, albeit applied to relations with the EEA-EFTA states. Some 80% of the articles in the agreement are on citizens’ rights and separation provisions—tying up arrangements on things like the movement of goods, police and judicial co-operation, and data and information exchange—most of which is copied over from the UK-EU agreement.

Second, like the UK-EU agreement the deal ensures that the social security measures for citizens’ rights—ensuring continued access to pensions, healthcare and social welfare—adapt in line with changes in social security legislation in the EU.

There is an important difference, however. This agreement will follow the EEA Agreement, not EU law directly. Although in practice there may be little difference, only changes to social security rules that have been incorporated into the EEA Agreement—after being approved by the EEA Joint Committee—will affect the EEA-EFTA agreement.

There are other important differences with the UK-EU agreement too. Not least, the EEA-EFTA deal doesn’t include the same extensive dispute settlement arrangements for independent arbitration.

In fact, it doesn’t reference independent arbitration at all, and foresees disputes being solved solely within the Joint Committee set up to manage the agreement.

This doesn’t definitively preclude the possibility of arbitration in future, but the lack of prescribed procedures does point to a more informal arrangement.

Little mentioned in the Brexit debate in the UK has been the fact that at the end of transition the UK will not just cease its routine interactions with EU member states but with the EEA-EFTA states too.

The EU and EEA states meet through the joint EEA institutions: twice a year at ministerial level, and there is at least a bimonthly meeting of EEA-EFTA ambassadors and the Commission, as well as the meetings of various sub-committees.

This will make relations with Norway—which plays a leading role in EEA-EFTA external relations—particularly important for the UK in future.

The UK government reached a no deal agreement with these latter two in April 2019, but this agreement will now not enter into force and a new agreement needs to be negotiated before the end of the transition period.

Finally, although the UK-EEA EFTA agreement doesn’t mention it, UK relations with these states have implications for its potential membership of the 2007 Lugano Convention on jurisdiction in cross-border civil and commercial disputes. Not least because Iceland and Norway could in theory veto British membership.

The Convention is an important basis for judicial co-operation, ensuring that court rulings reached in the UK can be enforced in other signatory countries, and vice versa, and it prevents parallel proceedings running in different countries on the same case.

Whether or not the UK is allowed to accede to the Convention will be an early indication of how the UK might interact with EU-led initiatives as a third country in future, and how willing the EU will be to allow British participation in certain cases.

The government has expressed a desire to join the Convention, but this requires the agreement of all existing signatories: the EU, Denmark (which has an opt out in this area and is a signatory in its own right), Iceland, Norway and Switzerland.

The latter three have all publicly supported UK membership, but no non-EU or non-EFTA member state has yet acceded. One reason the UK is interested in the Lugano Convention is that it requires member states’ courts only to ‘pay due account’ to ECJ rulings, not follow them directly.

The EEA-EFTA agreement is a further demonstration that undoing EU membership also requires largely rebuilding not just UK-EU relations, but those which the UK built up in the EU with non-member states.