Election night: five things to watch out for

For Prime Minister Boris Johnson to be able to push ahead with his Brexit plans, the Conservatives need to win an outright majority. For that they need 326 seats.

This is because none of the other parties likely to win seats, including his former allies in the Democratic Unionist Party (DUP), is in favour of passing the prime minister’s Brexit deal into law.

Most of the opposition parties (though not the DUP) favour a further referendum on whether the UK should, or should not, leave the EU.

So, if the prime minister fails to win a majority, he could find himself forced out of Downing Street – and replaced by an alternative government that sets about holding a new referendum.

If Mr Johnson is to win an overall majority, he is likely to have to win a significant number of marginal seats from Labour.

These leave-inclined marginals – in north-east Wales, the Midlands and the north of England – are said to form Labour’s “red wall”.

They are seats in which Labour came only narrowly ahead of the Conservatives in the 2017 election. Many, such as Bishop Auckland, Workington, and Wrexham, have traditionally been safe Labour seats. Indeed, some of them have never returned a Conservative in a post-war general election. 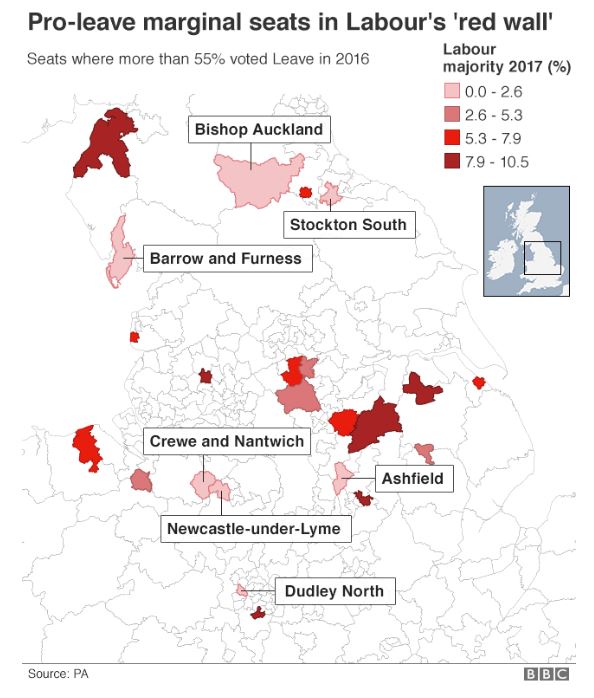 However, although none was won by the Conservatives in 2017, in many of them there was a marked swing in the party’s favour, making them marginal. This was part of a wider tendency for the Tories to advance most strongly in the most pro-Leave areas.

At this election, polls suggest that while the Conservatives are weaker among Remain voters than in 2017, they are stronger among Leave supporters. So, the party might again perform relatively well in Leave-inclined seats.

Whether or not the red wall begins to collapse is likely to be key to the election outcome.

If Labour’s election night is going well, it will also be looking to take marginal seats from the Conservatives and the SNP such as Southampton Itchen and Glasgow South West.

3. Is there a Liberal Democrat revival?

The Liberal Democrats entered this election buoyed by a revival in the polls and the addition to their ranks of numerous MPs who defected from their previous party.

But the polls have suggested the party’s support has been in decline during the election. They also indicate that the party, which is strongly anti-Brexit, has not made any progress at all among Leave voters. 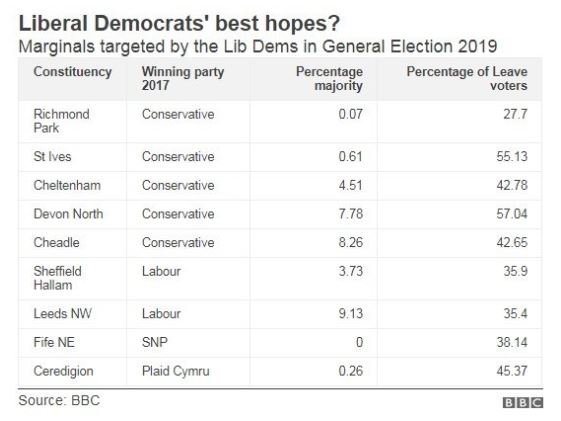 A key question is whether the election leaves the party with a significantly stronger foundation on which it might be able to rebuild for the future, or whether it remains the relatively small parliamentary force it has been since suffering heavy losses in 2015.

Some of the seats it hopes to gain – such as Richmond Park – voted heavily for Remain, and are ones the party would seem most likely to win. Others, including many seats in south-west England where the Lib Dems have traditionally been relatively strong, voted Leave in 2016 and may prove difficult to win over.

Meanwhile, the defectors from other parties, such as Chuka Umunna, who is standing in Cities of London and Westminster, and Sarah Wollaston in Totnes, face a difficult struggle trying to win a seat under the Lib Dem banner.

4. Will Scotland move towards another independence referendum?

The SNP have been the largest Scottish party at Westminster since 2015. The political mood in Scotland for the next few years may well be determined by their performance in this election.

In 2016, Scotland voted by 62% to 38% to remain in the EU. That contrast with the rest of the UK resulted in calls from the SNP and the Scottish Parliament for a second vote on independence.

Scotland’s First Minister, Nicola Sturgeon, has indicated she wants to hold that referendum in the second half of next year. Meanwhile, polling suggests that support for independence is now above the 45% that backed Yes in the independence referendum in 2014.

The Conservatives insist that no second ballot should be held in any circumstances. However, if the SNP make gains on Thursday and the Conservatives fall back in Scotland, the Scottish government may feel emboldened to press its demand.

Labour have indicated that they might be willing to consider holding such a ballot in the second half of a term in office. Should there be a hung parliament, Labour may come under pressure from the SNP to agree to an independence vote in return for their support for a minority government.

On the other hand, if the SNP suffer a setback – and many of the seats they are trying to defend are highly marginal – calls for a second independence referendum might be put on hold.

5. Will tactical voting make any difference?

The election campaign has been marked by calls for tactical voting from both sides in the Brexit debate.

Polls suggest that the overall level of support for both Leave and Remain remains quite similar. But Leave support is concentrated on the Conservatives, while the Remain vote is split, principally between Labour and the Lib Dems.

Indeed, according to the polls, as many as 70% of those who voted Leave in 2016 say they will vote Conservative. In contrast, only just under half of those who voted to stay in the EU three years ago are backing Labour and between a fifth and a quarter are supporting the Lib Dems.

The fragmentation of the Remain vote has led to the launch of several campaigns encouraging people to vote tactically to defeat the Conservatives.

If these campaigns are successful, the Conservatives will win fewer seats than would otherwise have been anticipated. As a result, it might make a difference to the party’s hopes of an overall majority.

Whether people will be willing to vote tactically on any significant scale is highly uncertain, but it is clearly an important pattern to look out for on the night.