Much has happened in the 18 months since the EU referendum: a substantial drop in the value of the pound, a new prime minister, a snap general election, and a continuous stream of news coverage of the UK-EU negotiations, now entering their second and crucial stage. But have voters changed their minds since that fateful day in June 2016?

Opinion polls consistently show that these events have done little to change people’s minds about Brexit. When asked whether, in hindsight, people think Britain was right or wrong to vote to leave the EU, polls show that the public remains evenly split on the question.

Just over half of people (who express an opinion) think it was right for Britain to vote to leave, while just under half think it was wrong.

Figure 1: In hindsight, do you think Britain was right or wrong to vote to leave the EU? 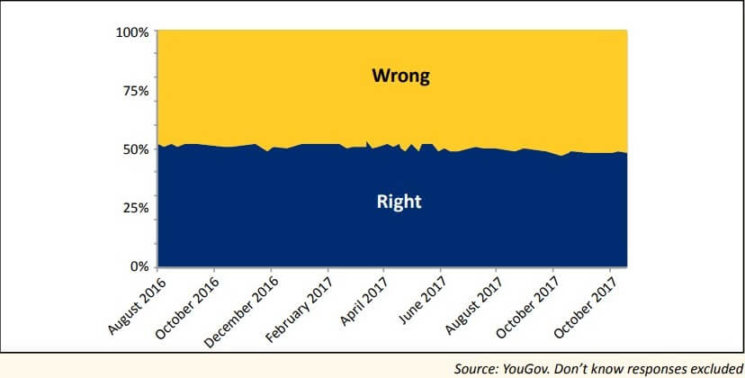 Why have so few people changed their minds about Brexit since the referendum? One reason is that Brexit has given rise to new political identities. When asked whether they think of themselves as ‘Leavers’, ‘Remainers’ or ‘neither’, we consistently find that, since the referendum, around 35% of people identify as Leavers and around 40% as Remainers.

These identities have remained largely unchanged since the referendum, and cut across existing party lines. However, as with traditional partisan identities, these newly formed Brexit identities have consequences for how people view the world.

Unsurprisingly, Leavers are much more likely to think that Brexit will have a positive effect on the country and their own personal circumstances, compared to Remainers who generally have a far more negative view.

These differences are of course part of the reasons why people decided to vote the way they did in the referendum in the first place. However, there is also some evidence to suggest that individual interpretations of any new evidence about Brexit are motivated by these emerging identities. In other words, Remainers are more likely to regard any negative economic news as a direct consequence of Brexit.

Leavers, in contrast, are more likely to ignore such news, or blame it on other factors, such as the EU’s tough negotiating stance. To the extent that Brexit identities motivate how we view the world, we are also less likely to change our minds about whether Brexit was ‘good’ or ‘bad’, even when the facts change. Yet viewing economic well-being and government performance through the lens of these identities puts the very notion of political accountability at risk.

To hold governments to account, citizens must be responsive to facts on the ground; these new, stable identities may prevent Leavers from either seeing acknowledging any harm that might come from Brexit and similarly prevent Remainers from seeing or acknowledging any good that might result.

Most worryingly perhaps, such identities also shape how people in Britain view one another. During the referendum campaign, we asked respondents to the British Election Study (BES) to describe characteristics of those intending to vote Leave and vote Remain in positive or negative terms.

Regardless of their own vote intentions, most respondents could think of positive and negative characteristics of each. Positive words like “patriotic” for Leave voters and “optimistic” for Remain voters appeared to come quickly and broadly to mind while “scared” was widely reported as a negative feature of both groups.

In the meantime, the emergence of new Brexit identities has led to quite divergent views of the two groups in the minds of citizens. Indeed, the Brexit identities appear to be a driver of prejudice towards people who belong to the ‘other’ group.

To examine the extent to which Brexit identities have given rise to such feelings, we asked a standard set of prejudice questions, inviting people to say how well they thought a number of words would describe Leavers and Remainers.

This figure shows just how polarized the two groups have become. Remainers and Leavers both describe each other as “hypocritical”, “selfish” and “closed-minded”, and their own group as “honest”, “intelligent” and “open-minded”.

There is a remarkable symmetry in responses that reflect the animus that people feel towards the other group. There is thus little evidence to support the Prime Minister’s statement that Britain “has come together” to face the challenge of Brexit. Instead it seems that she is presiding over a divided and polarized nation.

It is too early to say whether these identities will persist after Britain leaves the EU, or whether they will be absorbed by more long-standing identifications with political parties.

What our evidence does suggest is that the emergence of Brexit identities has had a highly polarizing effect on British society. This may compromise people’s willingness to talk across the political divide and come to mutual understandings in the current debate on the future of Britain’s relationship with Europe.

By Professors Sara B Hobolt, Thomas Leeper and Dr James Tilley, Brexit research team at The UK in a Changing Europe. You can read the full report here.