According to today’s ONS labour market statistics, the number of people in employment in the UK has fallen by just over half a million, compared to a year earlier.

But within that, the number of people born in the UK with a job has actually increased by a quarter of a million, while the number of non-UK born people in employment has fallen by about 800,000. 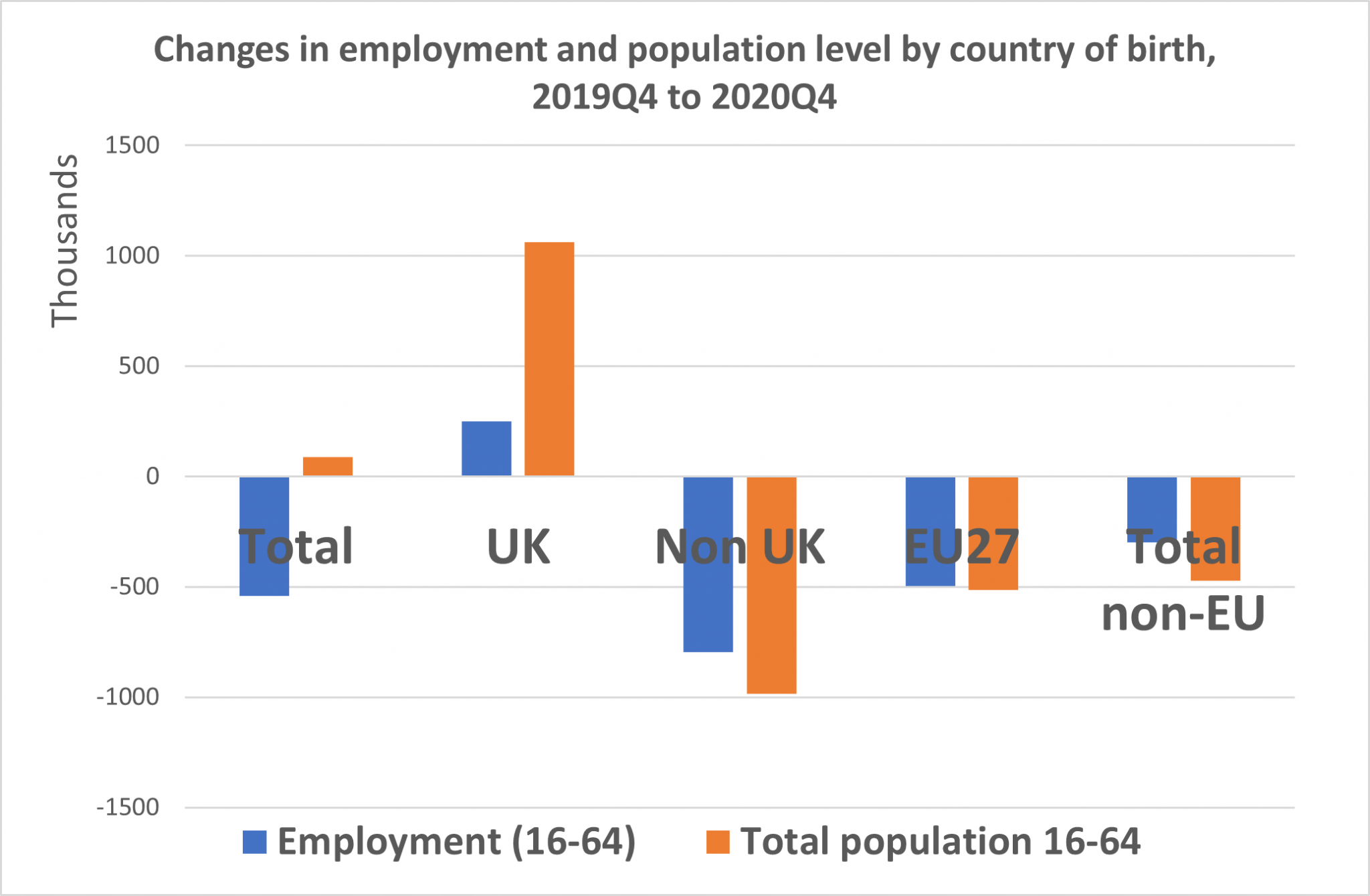 Source: Office of National Statistics: Employment, unemployment and economic inactivity by nationality and country of birth

As Michael O’Connor and I explained here (and in more detail here) these numbers are a statistical artefact.

While the Labour Force Survey data shows a large fall in the non-UK born population – which can only be explained by substantial net emigration – the ONS is still sticking to its pre-pandemic projections for the overall population.

This means that it assumes, implausibly, that the measured exodus has been counterbalanced by an increase in the UK-born population, even though we have no reason to believe that has actually been the case.

So what is really going on? In our earlier work, based on the previous quarter’s statistics, we discarded ONS’ assumption about overall population levels, and concluded:

‘Instead of the UK-born population rising by over a million, it is essentially unchanged. The non-UK born population falls by even more than in the published estimates, reflecting in particular what the data suggest about trends in London, where a large proportion of non-UK born people live.’

‘These estimates are crude and illustrative, and will certainly not be accurate. In particular, as noted above, to the extent that the pandemic has reduced response rates among non-UK born residents more than others, they will overstate the decline in that group and overall.’

Since then, work by others has suggested that non-response rates have indeed fallen more among non-UK born residents.

In particular, Migration Observatory argue that changes in the way the survey data is collected has disproportionately affected migrants – even those who have been in the UK many years. Their estimates suggest that the fall in the migrant population might be in the region of half a million, rather than a million (while agreeing with us that the change in the UK born population is likely to be close to zero).

But – as they too admit – their approach, like ours, raises as many questions as it answers.

Today’s figures, which show a further fall in the non-UK born population compared to last quarter’s (and a further corresponding rise in the UK-born) only deepen the confusion.

There is ample anecdotal evidence that many migrants have indeed left the country, reflected in stories like this. And while the housing market overall is booming, rental prices for London flats have fallen sharply – exactly what you’d expect if there was indeed significant net emigration.

So while the fall in the non-UK born population is clearly not a blip or a statistical artefact, its magnitude is. Nor will other official statistics shed any immediate light.

The (separate) International Passenger Survey, which measures immigration and emigration, and which would normally provide a useful cross-check on the Labour Force Survey numbers, has been suspended entirely.

At a time when we are trying to vaccinate the entire UK population, it seems somewhat less than optimal that we do not know, within half a million or so, how big that population is, or indeed how it is distributed.

Will the 2021 census – which takes place on 21 March of this year – help? It will certainly be invaluable in telling us more about the current position, but the statistical fog means we are unlikely ever to find out, even roughly, what migration and population trends looked like during the pandemic itself.

And perhaps more important is what happens next. Arguably, the exodus of migrants during the pandemic benefits the UK, by reducing population density, with associated health benefits, and pressure on the benefit system and public services.

It also benefits the migrants themselves, who presumably returned to countries less affected either in health or economic terms. This is the flipside of the UK’s flexible labour market.

But will they return? In an optimistic scenario, the UK’s successful vaccine rollout means that London goes from being perhaps the worst place to be in Europe in spring 2020, from both an economic and health perspective, to the best.

As the UK recovers more quickly and strongly than European competitors, migrants will return, adding to both demand and supply, and helping power a strong recovery.

In particular, it is still unclear whether EU nationals with ‘pre-settled’ status will retain their status if they have been out of the country for more than six months.

Given the extent to which the UK’s – and especially London’s – growth has been driven by the immigration over the last two decades, this would be a major drag on future economic growth, meaning the economic impact of the pandemic would not just be a temporary slump but a permanently smaller economy.

By Jonathan Portes, Senior Fellow, UK in a Changing Europe.