What the English Government Food Strategy says to Europe 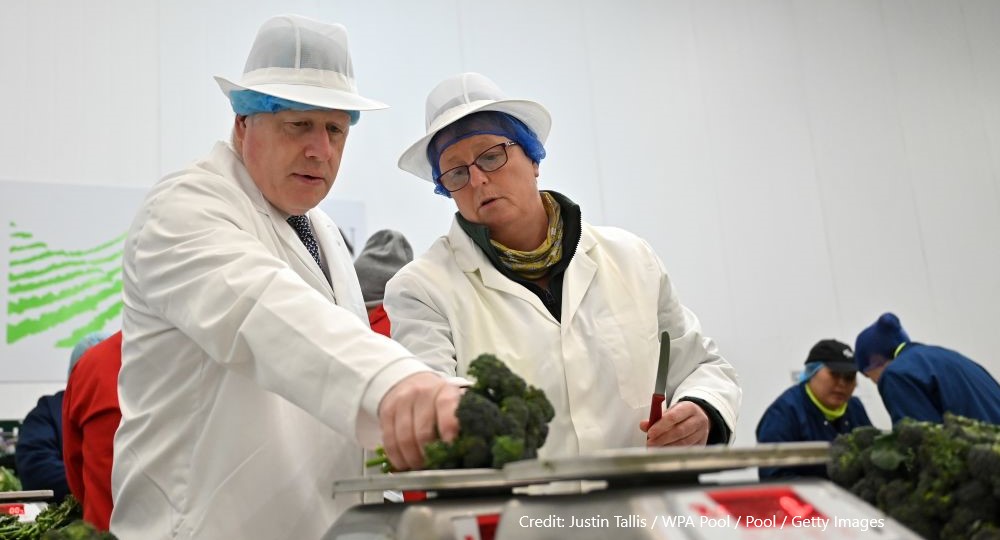 The word ‘Europe’ is mentioned once in the Government’s new 33-page Government Food Strategy (GFS) published on Monday. Europe is now ostensibly the past for Whitehall. The ‘EU’ is cited a grand four times in relation to bureaucracy and rules, once on wine. It could be worse. It might have resuscitated bent bananas.

A central fact oozes from the GFS. Europe might barely be cited but remains the elephant in the food room, partly as legacy, partly totem, partly as source. The GFS is already widely judged a disappointment. Henry Dimbleby, to whose Independent Review this is supposed to be the official response, has already said “it is not a strategy”. At least five EU-sensitive political realities are ducked.

The first is that, while the EU might not overtly feature, its presence as a punchbag for bureaucracy, rules, and burdens on business remains. The one case cited (but not explained) on page 20 is apparently unnecessary wine regulations. Let’s be clear. There are about 3,800 hectares growing British wine, while the EU has 3.2 million hectares. The modern British wine industry is about 50 years old. Europe’s is centuries – indeed millennia – old.

Happily, English wine may prosper with climate change ahead, but will need to be careful about its regulations to retain consumer trust. How much longer a UK government can blame the EU for politics remains to be seen, but it doesn’t help negotiations if they do. Tell that to Northern Ireland whose Protocol the English now propose to change (sorry, ‘fix’). A Bill was launched on the same day as the GFS.

Secondly, the GFS is a strictly English document. Scotland, Wales and in different ways Northern Ireland have devolved agri-food powers, but it’s England that dominates and has the giant food companies, factories and retailers. There is no hint of addressing unequal food power in the GFS, no future regionalism, no promise of a EU-echoing Committee of the Regions giving needs-based support.

Yet it’s at the sub-national level of governance where most room for political manoeuvre and appetite for change exists. It’s where the food start-ups exist, where the need to rethink multi-functional land use most matters. What is land for? Homes and roads, even solar farms, not food farms is the unwritten policy!

The GFS name-checks ‘levelling up’ but fails to slough off Whitehall powers or allocate incentives to the Cities. The M10 group of metropolitan mayors, for instance, could now be kick-starting bio-regional food economies which deliver resilience for climate change ahead. They could be developing shorter supply chains to deliver the low carbon, low calorie food systems of the future.

Thirdly, there’s the matter of food security. It’s the EU which mostly provides external food for Britain. The GFS expressly rejects any desire to grow more food, although the Government seems happy to allow public debate as though that’s not the case; there’s talk of new hi-tech horticulture but little about who’s to work in it.

Here’s a dilemma. The Brits have Europeanised. They want olive oil, fresh citrus, and from the EU receive a steady flow of health critical fruit and veg. If not from the EU, where is this to come? A leaked earlier draft talked of opportunities for swede and venison production. Anticipating headlines, these were wisely dropped.

Fourthly, big challenges are upon us: climate change, diet-related ill-health (think obesity), social inequalities, the purpose of land, food standards. The GFS side-steps all these by deciding not to legislate.

These are the political crunch issues. Public concern about chlorinated chicken and weakened meat standards have already shown they can damage the Government. It’s why Dimbleby’s report was expected to become a new Food Bill. Defra Secretary of State George Eustice ruled this out, leaving him wriggle-room for future trade deals. He’s already flagged that while maintaining ‘high’ EU-derived standards, the UK might look favourably at self-certified standards in a US trade deal.

Finally, as the UK negotiated Brexit the EU created the Farm to Fork Strategy, recasting the Common Agricultural Policy. This was reaffirmed following the Ukraine war, despite some voices wanting a return to production at all costs. In contrast, the GFS lack of coherence and realism. Just when a food system needs a reset to face the multi-whammy of ecosystems, health and socio-economic stresses, England is being offered a non-strategy without targets, ducking challenges outlined by its own advisors and researchers.

By ducking this serious politics, the GFS actively delegates trouble to future Governments and present citizens. Its 33 pages are a smorgasbord of ideas which talk of data sharing, food poverty alleviation, and market realignments. Arguably the most sensitive politics of the day is food prices. Dimbleby argued that for the population to eat healthier diets requires those on low incomes to have more incomes, plus welfare support, mass free school meals, and interventions to end what he called the junk food cycle.

The White Paper simply side-steps these and refers them to the Department of Health and Social Care. The UK has the highest consumption of ultra-processed foods (high in salt, sugars and fat) in Europe. The UK has a huge food manufacturing sector. What is Government going to do about it? Meanwhile the UK produces 11% of the fruit it consumes and 55% of its vegetables. What is the government planning to do about these issues?

The rocketing global food prices now affecting world markets has widely been seen as a wake-up call even in the UK. The food system is oil-dependent. Fertilisers, which enabled the massive production increases from the 1960s is a source of weakness not strength. Ukraine has brought this to the fore but failed to general a commitment to get off the oil treadmill. It should have.

All this speaks to a wider strategic failing. Forget the border delays, the new bureaucracy and costs from Brexit. Ignore the delicate politics of the Northern Ireland food trade border. At least London can and will now set its own wine standards.