Estimating the trade effects of the Brexit announcement shock 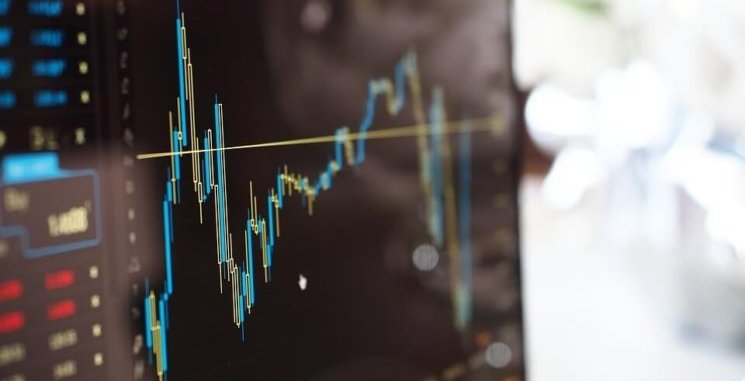 In this piece of research, we set out to investigate how the vote of 23 June 2016 has so far affected the volumes and patterns of Britain’s trade with major trading partners inside and outside the EU.

As trade economists, we find this question particularly interesting, despite – no, indeed, because of – the fact that Brexit has not happened yet. No tariffs or trade barriers have been placed between the UK and EU, and yet firms are already aware that, depending upon the final deal, there may be substantial barriers within months.

Several academic studies have emphasised that policy uncertainty is a major deterrent to trading firms, who invest a lot in building reliable trading relationships, and the current Brexit negotiation period is a classic example of this.

Another interesting aspect is the fact that the outcome of the vote was so unexpected: even on the day of the referendum, odds on Remain winning were about 4 to 1. A classic sign of surprise is the plunge in the 10-15 per cent value of sterling against the dollar and euro within hours of the result.

In order to investigate the effects of the policy uncertainty and anticipation upon Britain’s exports and imports, we turn to the published monthly statistics for bilateral trade between the UK and 28 other countries (14 in the EU, 14 outside).

These are currently available from 1999 to the first 3 months of 2018. We want to use these to predict what might have been expected to happen to the UK’s trade with each country in a counterfactual world where the Brexit vote had gone the other way. This utilises a computer-based technique: the Synthetic Control Method (SCM), which creates the best possible fit on British trade with each country based upon trade flows between other country pairs before the shock of June 2016, and then projects forward a ‘synthetic doppelganger’ for Britain’s trade in the months after the Brexit vote.

In this case, our key assumption is that the Brexit vote had a very strong shock upon trade flows involving the United Kingdom, but relatively little shock on flows which do not involve the UK.

SCM is increasingly popular amongst economists for comparing actual events with counterfactuals. One reason for this is that economies are subject to common fluctuations – periods of booming and contracting trade – which are often not easy to model, but show correlation across countries.

Constructing a ‘synthetic doppelganger’ enables us to control for these common but unobservable shocks. We also include in the analysis specific observable factors, such as GDP and exchange rate changes, which we would expect to affect individual trade flows.

SCM is especially useful as a graphical method, showing how the ‘treated variable’ (trade between the UK and other countries) tracks very well with the synthetic doppelganger up to the shock (Brexit), but the two diverge afterwards.

This graphical technique has enabled economists to carry out powerful studies on such shocks as the introduction of smoking laws in California, the arrival of refugees in a country, and the impact of war in Spain’s Basque region.

Of particular relevance are previous studies applying SCM to the impact of EU entry, and of Britain’s non-entry into the eurozone, as well as a very recent study which showed that, controlling for the upturn in all economies in 2016, the growth of the UK economy after the Brexit vote was actually less than one might have expected without the vote.

We compare UK exports to, and imports from, each of the other 28 countries individually, with a synthetic doppelganger. In all cases, the doppelganger and actual trade track each other closely up to the point of the referendum, after which we show a clear divergence.

Aggregating UK exports into those to the EU and those to the non-EU countries, we find a clear and consistent story in both cases: namely, from the moment of the vote, British exports fall strongly behind the doppelganger. This is shown in Figures 1 and 2 below. 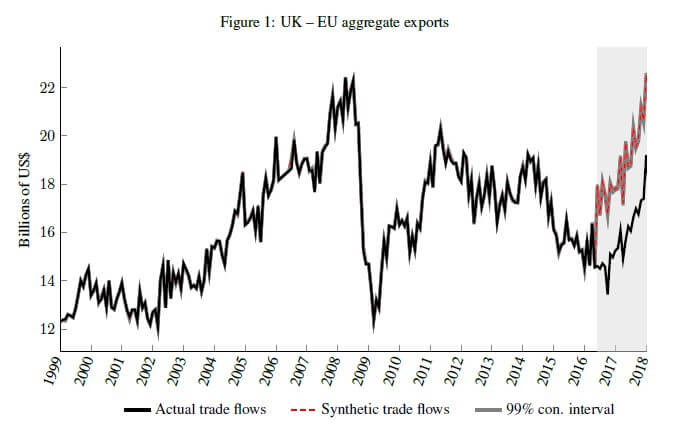 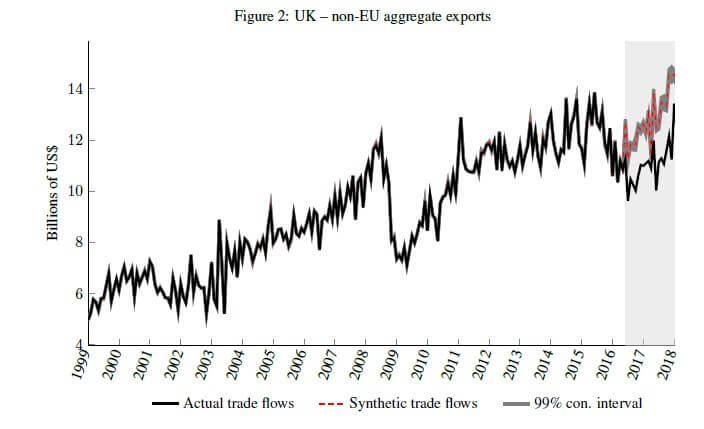 In both cases, the divergence is of a similar order of magnitude (13-16 per cent). Interestingly, this is roughly in line with the fall in sterling. An interpretation in layman’s language is that, through the fall in the pound, the UK started pricing its exports much more cheaply (in terms of dollars), but found few extra buyers, other than those we would have already expected.

Further analysis, including lagged exchange rates to allow for slow adjustment, reduces the shortfall, but not greatly.

Interestingly, two other recent studies using quite different data and methodologies have also found disappointing export performance after the vote. A team from Cambridge found that British companies were less likely to enter into trade, and more likely to leave it, than before the Brexit vote. And a firm-level survey by a team from Sussex also found poor performance among exporters.

In interpreting these poor export results, it is worth noting that many of the numbers quoted in newspapers are for exports measured in pounds. These may have grown, just because the last couple of years have shown growth in global markets.

Our argument is that, since Britain’s exports are used to buy imports, what really matters is the value in terms of the currencies of our trading partners. Hence, newspapers may have failed to pick up just how much market share Britain has lost due to the uncertainties around Brexit.

The story with UK imports is less dramatic. Aggregating all EU countries and all non-EU countries, we find imports from the EU are little changed, while those from outside the EU are actually below what we would have predicted.

More investigation is merited, but there is at least a prima facie case that the media campaign may have resulted in a resurgence of Commonwealth sympathies among Leave voters. However, any such switch of preferences is entirely one-sided: there is no evidence at all of Commonwealth consumers turning to UK exports.