British jobs for British workers? Over the last year, the number of people with a job and living in London who were born in the UK has increased by more than a quarter of a million.

That’s according to the labour market statistics, published by the independent Office of National Statistics, and based on the Labour Force Survey – the internationally comparable ‘gold standard’ for data on households, employment and unemployment.

Does it sound implausible that over the course of a pandemic that has devastated the UK economy, and which has hit London particularly hard, with its high concentration of jobs in hospitality, arts and entertainment, and tourism-related businesses, the number of UK-born workers in London should have soared by 10%? What’s going on?

The answer is to be found not in the data about UK-born workers, but rather in that about the non-UK counterparts, both from the EU and further afield.

Looking at the country as a whole, the ONS estimate that the number of people born outside the UK resident here – workers and non-workers – has fallen by about 900,000. And while some of this may well be due to the difficulties of conducting surveys during the pandemic, that doesn’t, at least so far, appear to explain the fall.

It seems more plausible that people actually are leaving.

Migrants are disproportionately likely to be employed in the hospitality sector, and other service sectors that require face-to-face contact, so are more likely to have been furloughed or lose their jobs.

With many universities moving wholly or largely to on-line teaching, many foreign students may have decided not to come to the UK or to return here. And most of all, the UK has performed relatively badly in both economic and health terms during the first wave of the pandemic.

For many migrants, the choice would have been to stay here, with no job, less or no money, and pay for relatively expensive rented accommodation – or return home to family, with lower costs and most likely less risk of catching Covid-19. Not a hard choice.

But how does that explain the increase in the UK-born population? The answer lies in the way the estimates are constructed – from the Labour Force Survey (LFS), which is a survey, not a count.

But how large is the whole population? The ONS assumes a number for the current population, based on what we know about births, deaths and population ageing – and on some assumptions, based on historical data, about levels of immigration.

Crucially, the ONS has not made any changes to its population projections to take account of Covid-19-induced emigration – even though, as we’ve just explained, it has reduced the resident population by some hundreds of thousands.

So what does that mean in practice? As set out above, the assumption underlying the estimates is that the total population hasn’t changed (more precisely, that it has increased on the previously forecast trajectory).

But the LFS data also say that the number of non-UK born people has fallen by nearly a million. It follows, arithmetically, that the number of UK-born people must have increased – even if there’s no plausible way that could actually have happened in reality. And that’s precisely what the published statistics show.

So what would the data look like if we made the more plausible assumption that the reduction in non-UK born residents was real? Such calculations can only be rough and ready.

We can, however, approximate. In a new research paper, published by the Economic Statistics Centre of Excellence, we do just that. Our results are shown below for the change in population, by region, split between UK born and the non-UK born.

The results are dramatic. Instead of the UK-born population rising by over a million, it is essentially unchanged. The non-UK born population falls by even more than in the published estimates, reflecting in particular what the data suggest about trends in London, where a large proportion of non-UK born people live. 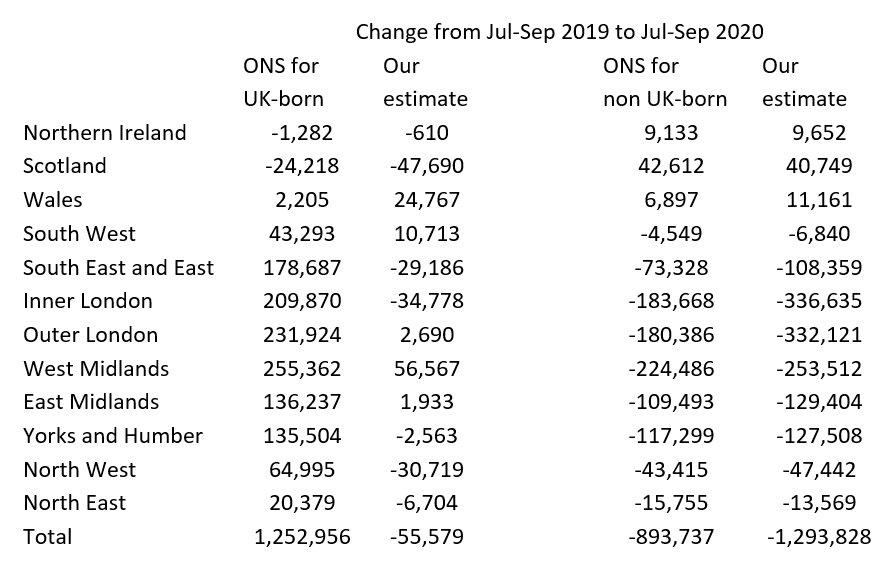 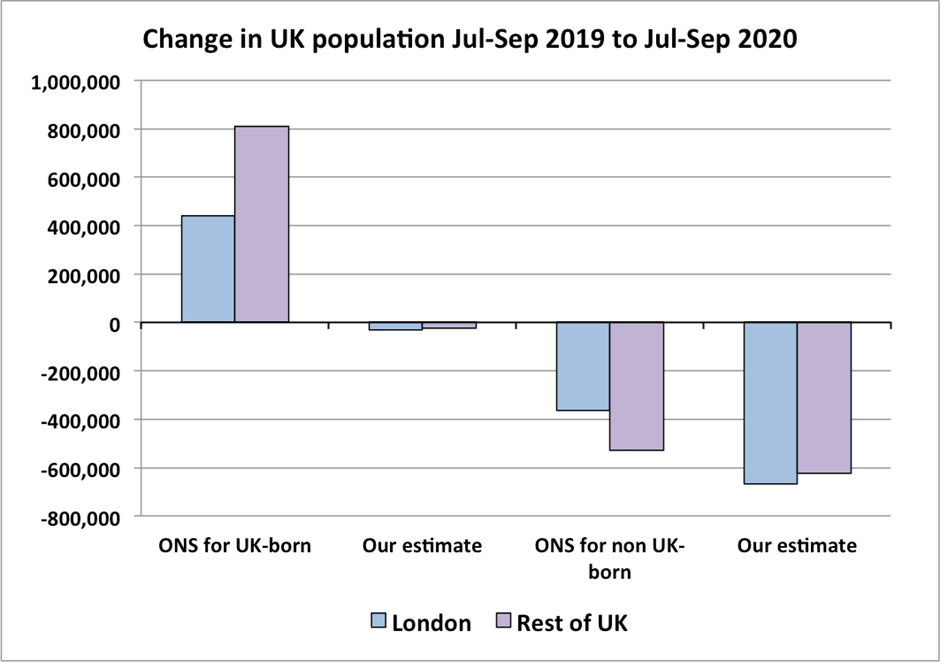 These estimates are crude and illustrative, and will certainly not be accurate. However, we would argue that they are clearly more plausible than the published statistics for the UK-born. And they give us a very different picture of recent population change in the UK: 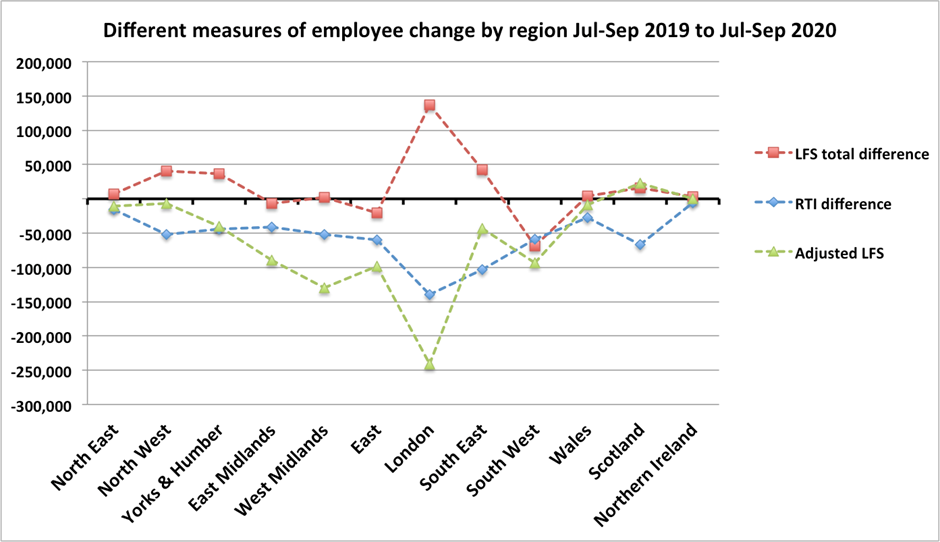 Our work leaves many questions unanswered. And we would stress that these are illustrative calculations rather than a fully worked-through attempt to ‘correct’ the published LFS statistics.

They can be viewed as putting an upper bound on the likely fall in the non-UK born population and that of the population as a whole, both nationally and on a regional basis.

Nevertheless, they paint a very different – and in our view much more plausible – picture of recent developments in the UK population and labour markets than the published statistics.

And they appear to us to be much closer to what common sense and what both qualitative and other quantitative data tell us.

By Michael O’Connor, Stronger in Numbers and Jonathan Portes, senior fellow at UK in a Changing Europe and professor of economics and public policy at King’s College London.