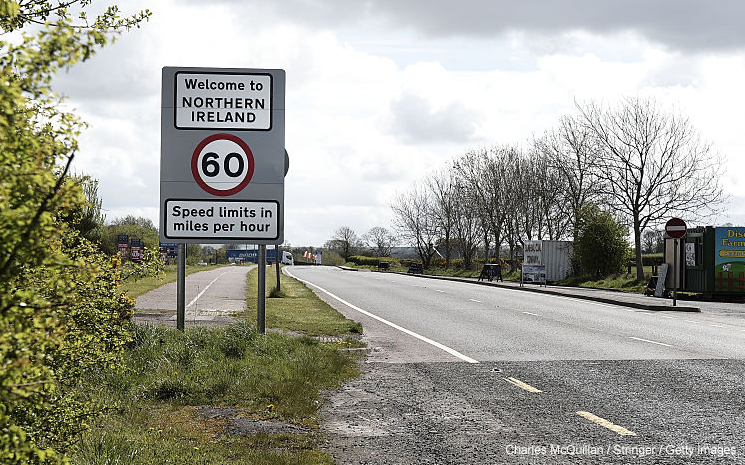 The first of these reports, prepared by the barrister Alison Harvey, tackles the practical consequences of the ‘birthright’ of the people of Northern Ireland, under the Belfast/Good Friday Agreement of 1998, to identify and be accepted as Irish, or British, or both.

This issue might, at first glance, seem removed from Brexit. The backdrop to this report, however, has been Emma DeSouza’s campaign, as a person of Northern Ireland, to be recognised solely as an Irish citizen.

Under the terms of the British Nationality Act 1982, which was not altered after the 1998 Agreement, she automatically became a British citizen upon her birth in Northern Ireland.

This underlying, and in Emma DeSouza’s case unwanted, imposition of British citizenship, is not just difficult to square with the protection of identity provided under the 1998 Agreement. It has also had a distinct legal impact upon her life.

It prevents her from exercising her rights under EU law to maintain family life in Northern Ireland with her husband Jake (a US citizen); for the purposes of the relevant EU law she is resident in her ‘home’ state, and the UK is therefore able to apply its own criteria on the residency of Jake (as a foreign national).

The exercise of her EU citizenship rights is therefore fundamental to Emma DeSouza’s case, which provides the subject matter of the second of these reports (which I was involved in preparing).

In 2017 the UK and EU pledged that, in light of the requirements of the 1998 Agreement, Brexit ‘will result in [n]o diminution of rights’ across the island of Ireland. They also emphasised that Irish citizens living in Northern Ireland ‘will continue to enjoy rights as EU citizens’.

Although the preamble of the withdrawal agreement’s Protocol on Ireland and Northern Ireland reaffirms these commitments, the operative provisions suggest that the legal guarantees might be less substantive in practice.

These protections are important, but this creates a gap between what people assume the withdrawal agreement’s protections to be and their actual operation. This deficit is sure to produce more flashpoint cases like DeSouza.

The UK government’s approach has been to tackle problems raised by its commitments as they become critical.

Having fought a protracted legal action through immigration tribunals, it finally acted to address the DeSouza complaint in the New Decade, New Approach agreement which restored power sharing to Northern Ireland in January.

The outgoing Northern Ireland Secretary, Julian Smith, informed the Commons that “there should never be an incentive to renounce British citizenship.

That is why we have provided the same family reunification rights to all the people of Northern Ireland.” How this proposal is to be translated into law has yet to be explained.

This response, moreover, addresses the symptom (the loss of family reunification rights), rather than the underlying causes (the automatic imposition of British citizenship and the refusal to recognise EU citizenship rights for dual nationals).

These factors have prevented the people of Northern Ireland from signing up to the UK’s Settled Status scheme for EU citizens. With the end of Brexit’s transition/implementation period looming, more such loses of rights might need to be addressed.

The special position of the people of Northern Ireland does not pose problems for the UK government alone.

Hundreds of thousands of Irish citizens living in Northern Ireland risk losing rights and entitlements which are commonly seen as being connected to EU citizenship, such as voting in European Parliament elections, and access to the European Health Insurance Card (EHIC).

And even if, in law, accessing these rights/entitlements was never as simple as proclaiming “civis europeus sum”, the Irish government is finding itself under pressure to respond.

In October 2019, as a no-deal exit seemed on the cards, the Irish government promised an Irish scheme equivalent to the EHIC card for EU citizens resident in Northern Ireland. It has subsequently gone quiet on this scheme with the conclusion of the withdrawal agreement.

The agreement itself, however, makes little difference to the entitlement; without the conclusion of a comprehensive future relationship agreement to enter force at the end of the Brexit transition/implementation period, Ireland’s proposals will need to be dusted off once again.

And note that Ireland’s initial proposal covered all EU citizens resident in Northern Ireland, not just Irish citizens; its responses are constrained by the commitments imposed by European partnership.

The Irish government has, however, been much more reticent in terms of voting rights for citizens resident outside the state. It maintains some of the strictest restrictions in this regard within the EU.

Given the considerable body of EU law which will continue to apply to Northern Ireland after Brexit, renewed pressure will emerge to enfranchise Irish citizens in Northern Ireland to whom these laws apply.

That, however, brings the next element of pressure on the 1998 settlement, which is grounded in equality of treatment between those who identify as Irish or British within the people of Northern Ireland.

As soon as some rights and entitlements are extended to one group, and not the other, the entire settlement comes under strain. This is very difficult to square with the commitment to ‘no diminution’ of rights.

That awkwardness manifests itself in the reluctance of the UK and the EU to deal with the overarching requirements of the 1998 Agreement, even if they repeatedly affirm their commitment to its ‘letter and spirit’.

Instead, sticking plaster solutions to pressing issues are reluctantly put on the table.

This approach is, in itself, generating a rolling crisis in Northern Ireland’s governance, as one cause célèbre gives way to the next and everything seems to remain in flux. It remains to be seen how much of this buffeting Northern Ireland’s unique (and fragile) constitutional order can sustain.