The UK will be taking part in the EU elections next week, and unlike our usual “First past the post” voting system, seats in the EU parliament will be allocated using a form of proportional representation called the D’Hondt method. Any form of proportional representation is more favourable to smaller parties than “First past the post”.

In an entirely proportional system you should just be able to vote for the party you like the best and know that your vote ‘matters’. But why then has there been a frenzy of debate over the failure of a “Remain Alliance” between the smaller Remain parties?

And does it matter that the Brexit Party have hoovered up votes from UKIP and the Conservatives and, to a lesser extent, Labour? The answer is yes and no – read on to find out how the D’Hondt method allocates seats and what it means for the EU elections.

How the D’Hondt method works

In a pure proportional representation method, seats would be allocated according to percentage vote share, so that a party getting 10% of the vote would get 10% of the seats and so on. The problem, especially where there are not that many seats available, is that this doesn’t usually give whole numbers of seats and you can’t split seats into fractions. The D’Hondt method is one way of ensuring that you take into account vote share while still ending up with each party having a whole number of seats.

In the first round when no party has any seats, the party with the most votes just gets the first seat. The second seat will then go to the second biggest party, unless the leading party has more than twice the votes of all the other parties (very unlikely). After that, allocation very much depends on vote share and it’s much easier to understand with an example.

The UK has 73 MEPs chosen by 12 regions – each geographical region is allocated between 3 and 10 MEPs. This is key for understanding the impact of D’Hondt as we’ll see.

As an example let’s consider England, where the same parties are standing everywhere, and use the latest English polling estimates from ComRes:

In theory the D’Hondt system should be very close to proportional in the UK with 73 seats available, but in practice it is less so because we’ve divided the country into regions and votes are tallied within these. This matters because several regions have fewer than 6 MEPs (e.g. the North East, East Midlands or Wales). The D’Hondt system favours the most popular parties when there are only a few seats but becomes increasingly proportional as more seats are available.

Below we see what happens to seats won with the above example vote share as you increase the number of seats available from 1 seat to 10 seats (in the UK, the number of seats in each region varies from 3 (NE England) to 10 (SE England excluding London)).

While the top two parties are pretty much guaranteed the first two seats, the third seat is up for grabs – the Brexit Party would only need a few more votes to beat the Lib Dems to that third seat. The Brexit Party does then in fact get its second seat after Round 4 and is then handicapped further – its original vote is now divided by 3 (2 seats + 1) for the next round. 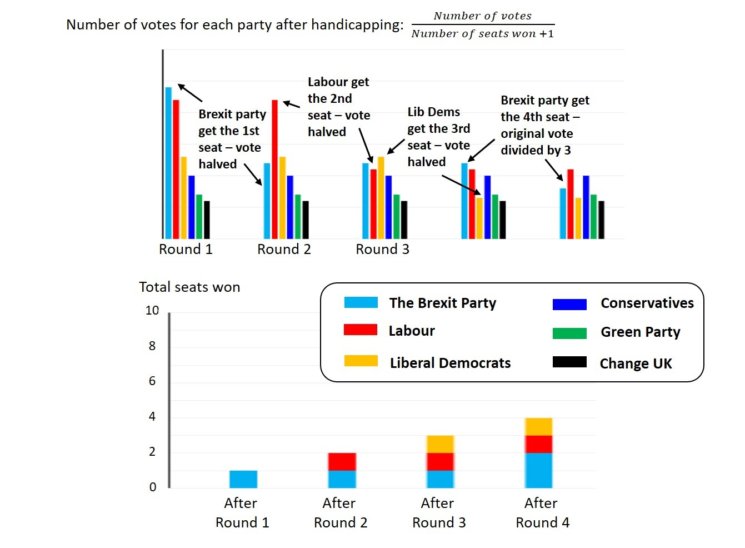 So when do the parties with smaller vote share get a look-in?

Not for a while – in fact, the 4th placed Conservatives don’t pick up an MEP until the 6th seat is allocated and Change UK with 6% of the vote never pick up a seat (see graphic below showing up to 10 rounds – the maximum number of seats in any one region in the UK). 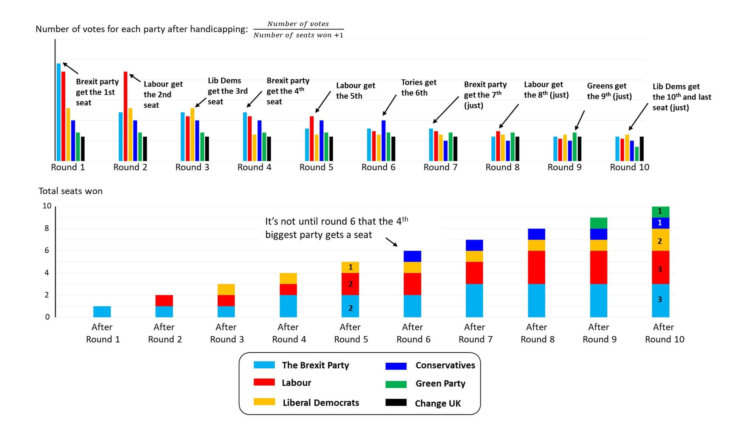 One easy way of seeing the bias towards more popular parties in regions with fewer MEP seats is to compare two regions with 5 seats to one big region with 10 seats, assuming that the parties have the same vote share for all three. After 5 rounds, the 5-seat regions have: Brexit Party – 2; Labour – 2 and Lib Dems – 1 (see graphic above). The total over both regions is then Brexit Party – 4; Labour – 4 seats and Lib Dems – 2 seats. Whereas for a single region with 10 seats, the final share is Brexit Party – 3; Labour – 3; Lib Dems – 2; Conservatives – 1 and Greens – 1. When regions are larger, parties with smaller vote shares have a bigger chance of getting a seat.

Should there have been a grand “Remain” coalition?

Commentators have argued fiercely about the benefits of parties campaigning on a Remain message to coalesce under a single umbrella. What impact could that have had? Imagine if Change UK, the Greens and the Lib Dems combined into a consolidated Remain party and the Brexit Party and UKIP combined into a consolidated Hard Leave party. The graphic below shows what would happen if overall vote share stayed the same. 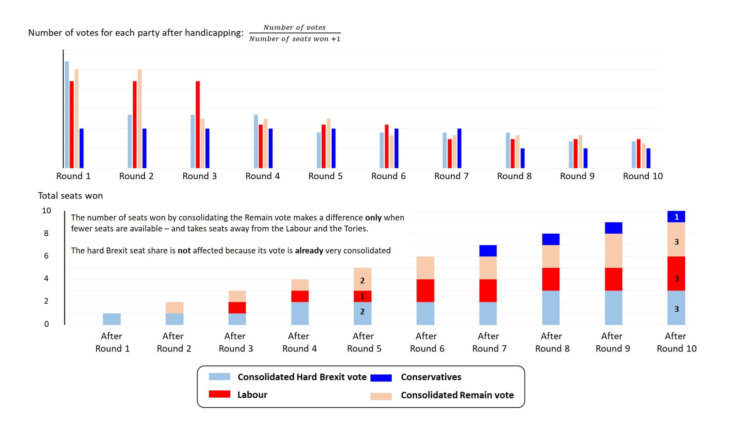 What does this mean for tactical voting?

How should you vote? Seat allocation after the first few seats becomes a close run thing, so turnout and small unpredictable differences between parties will make a big difference to the final couple of seats available in most regions. So, firstly, just vote. Secondly, if you really like a party, just vote for that party.

But if sending a message about Brexit is important enough that you would vote for a party that is not your first natural choice, then how to ensure the highest chance that a party embodying your Brexit view gets a seat?

Here is a simple rule of thumb:

There are organisations giving detailed tactical voting advice for all regions, depending on your objectives, but my feeling is that it is generally better to vote for a party you really like than to try to second guess all the other voters in your area.

The D’Hondt system isn’t perfectly proportional but it’s not bad and overall party vote shares matter just as much in the post-election analysis – so don’t get too stressed out by worrying about which party to vote for! 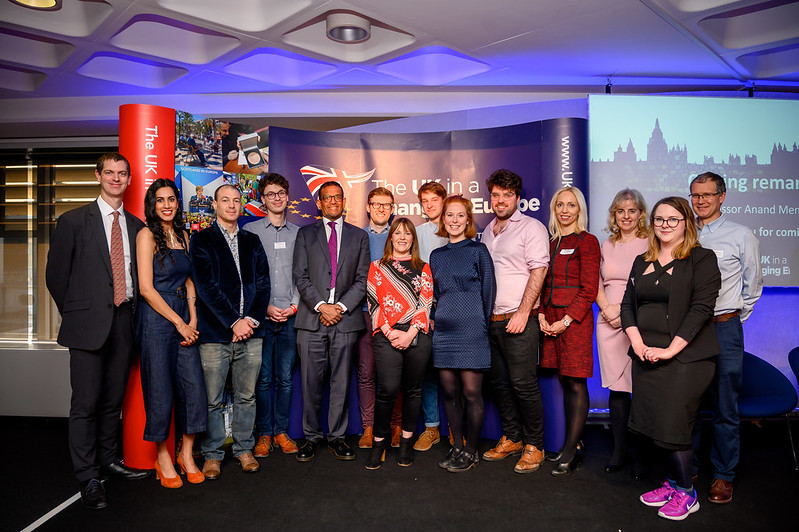 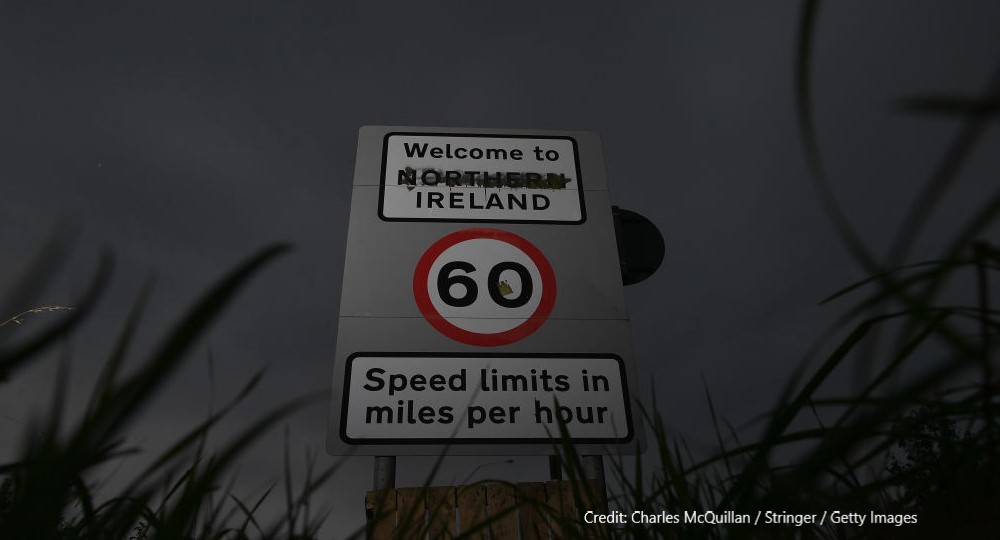