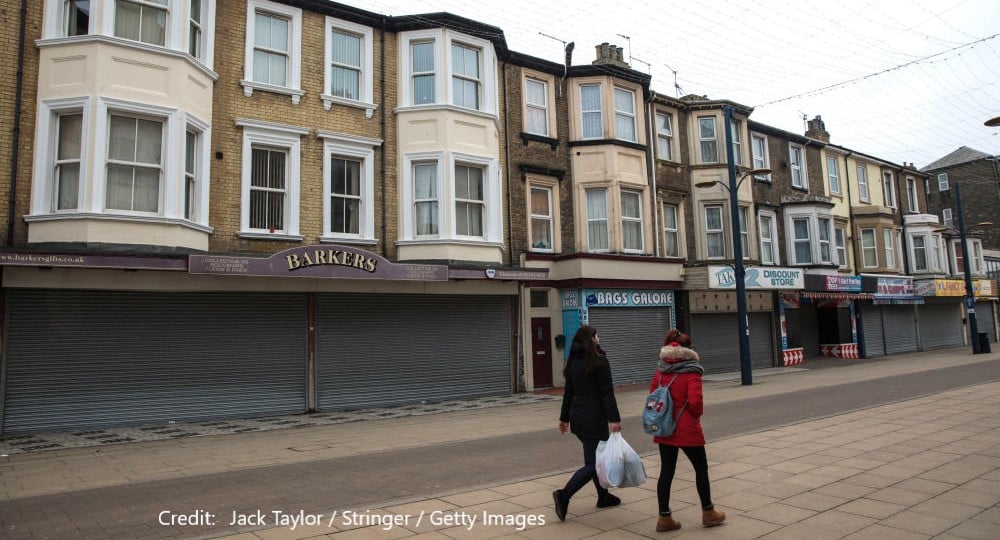 Reports now suggest that energy costs could hit £5,000 for an average household. The Child Action Poverty Group estimates that by January 2023, half of all households in the UK will be experiencing fuel poverty. In Great Yarmouth, the town where our work on EU migrant workers (part of the UK in Changing Europe research programme) takes place, 7,400 households (out of 455,000 households) could not afford their fuel bills last year, forcing them to choose between heating and eating; it’s anticipated this number will rise dramatically this year.

Low paid EU migrant workers (the group our work focuses on) are particularly affected. They are in work – those living in Great Yarmouth predominantly work in local food processing factories and on farms – but they still cannot make ends meet. So they struggle to put food on the table for themselves and their families. This is because ‘low skilled’ work is low paid. Zero-hour contracts and agency work is also common, leaving people without a steady predicable income.

The benefits system often fails to provide a safety net, particularly for those with pre settled status (less than five years residence) who face additional barriers in accessing other support such as welfare benefits.

So what is happening on the ground? It is difficult to disentangle the effects of the cost-of-living crisis from existing problems of debt, largely a legacy of two years of a COVID19 pandemic, where some workers couldn’t work, or found their hours reduced, or needed to isolate or shelter due to health concerns. For many, especially those more vulnerable, they have got into debt, or worse debt.

So like other groups facing financial insecurity an increasing number of EU migrants are relying on charity support, local authority assistance for emergency financial help (through the Norfolk Assistance Scheme (NAS)), and food vouchers. They are also turning to food banks.

There are more than 2,500 food banks now operating in the UK, as compared to about 30 in 2009 (more than the number of McDonalds). The Great Yarmouth Salvation Army provides (free) hot meals twice a week, a food bank (also twice a week) and more recently a ‘Sallys Store’ (a community supermarket to help encourage clients to become more independent once they are no longer reliant on food banks). Demand is now so great that the Salvation Army is opening another Food Bank in the neighbouring (and once more affluent) village of Caister. During the pandemic, the Salvation Army served around 120 hot meals twice a week as well as providing food for around 450 people.

The Salvation Army estimate that approximately 20% of those accessing their foodbank are non-UK nationals, yet only about 1 in 10 of the population in the Borough of Great Yarmouth are EU nationals. But as elsewhere in the UK, food supplies are running short. The manager of the GY Salvation Army says that need has increased while donations have decreased. ‘People are feeling the pinch themselves and are unable to donate extra food to the foodbank’. This has meant that the Salvation Army needs to supplement its stocks each week out of their own resources which are running short.

The table below outlines the emergency support GYROS, the migrant support charity we have been working with, has helped its clients to get access to in January-July 2021, and again in the same period for 2022. This help includes assisting clients to apply for the local assistance scheme (for people experiencing financial hardship) where numbers are up nearly tenfold, and direct referrals for the foodbank provision (including the Salvation Army) where numbers have trebled. 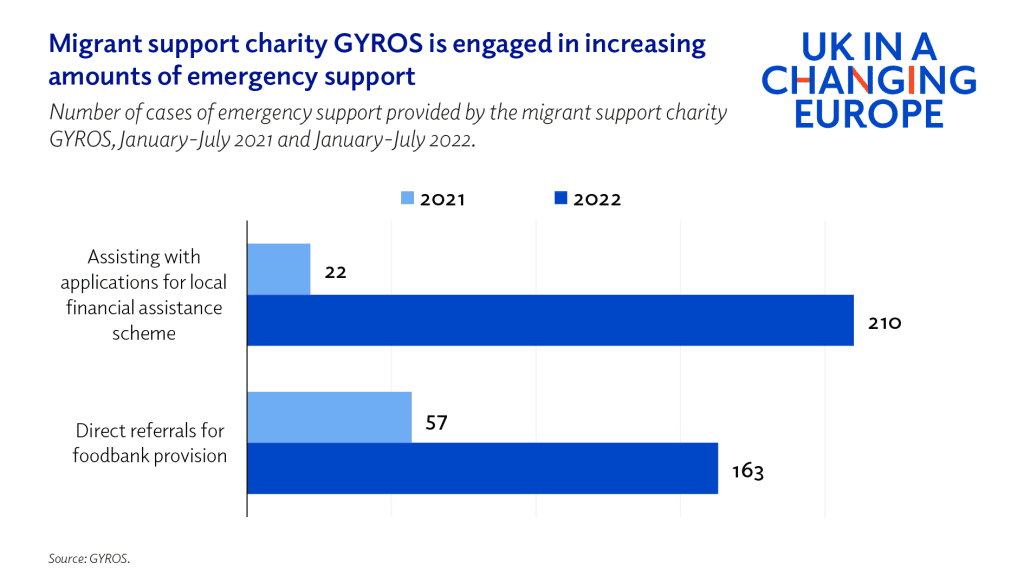 Referrals to the foodbank would likely be higher, but GYROS has also given out over 600 supermarket vouchers (equating to over £10,000 in total cost), provided as a one-off ‘thank you’ for participating in health research, including some publicly funded access to healthcare research. In July, 10% of their clients came to GYROS for food parcels/vouchers.

So, could we see EU nationals choosing to leave the UK as the cost-of-living crisis further deteriorates? Those living in Great Yarmouth are generally well-established, home is the UK, with children and even grandchildren living in the area. However, the support services like GYROS expect their clients’ financial position to deteriorate significantly in the winter and so the picture may change.

If so, this will cause real problems for the food industry. Poultry factories already struggle to recruit non-EU nationals, in part due to the unsocial shifts, the working conditions and the low pay. So do farms, the other large employer of EU nationals in the area. Now that the tap of free movement has been turned off, EU migrants are reluctant to come to the UK under the Seasonal Worker visa scheme, the scheme put in place to help farmers bring in temporary staff in the absence of free movement. Of those granted a Seasonal Worker visa in the year ending March 2021, 85% were Ukrainian (i.e. non-EU) nationals. One farm manager in Norfolk tells us EU workers prefer to stay within the EU where no visa is required. Ukrainians nationals, for obvious reasons, are not coming this year. This has forced farmers to look much further afield for labour, including, for example, to Nepal and Indonesia.

The absence of EU migrant workers has meant that farms are struggling to meet labour needs to harvest crops – with almost £60million worth of fruit and vegetables thought to be wasted in the first half of the year due to workers shortages, according to a National Farmers Union. This year, half of the UK’s potato crops are expected to fail as they cannot be irrigated. The departure of EU nationals with settled status will only exacerbate this problem.

The EU migrant worker population in Great Yarmouth is also ageing (the average age of GYROS’ clients is 46). They will not work in these physically demanding jobs for ever. In the absence of adequate pension provision, the cycle of debt, rise in the cost of living and inflation means that (settled) EU migrant workers will continue to look for state support; they will no longer be net contributors to the economy. Meanwhile employers will have to make working conditions significantly more attractive to the local workforce (little sign of this yet) or relocate their production abroad.

By Catherine Barnard, Deputy Director, UK in a Changing Europe, and Fiona Costello, both of the Faculty of Law, University of Cambridge.