EU migration is falling, public attitudes are changing and the government isn’t listening 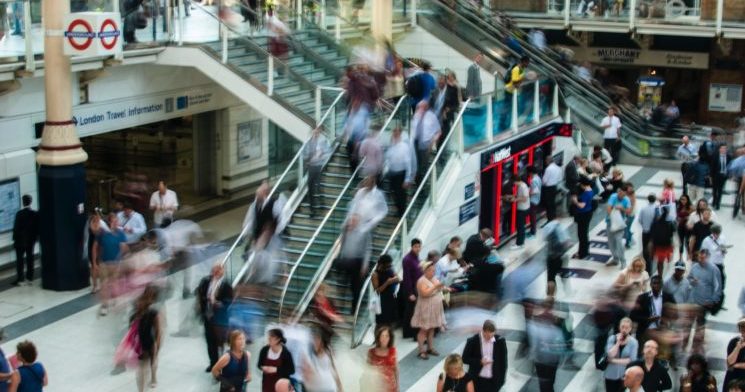 Migrants are not forever

Migration statistics out last week show a continuing downward trend in net migration from the EU. The government will see this as good news, making it easier to deliver on its pledge to reduce migrant numbers enshrined in new immigration policy.

For many employers, however, it’s bad news, and will confirm that their own recruitment problems are more widely shared. The fall in migration also coincides with an upturn in public attitudes.

It seems that many are now recognising the benefits of migration, and not just the ‘valuable’ highly skilled type much favoured by the government. Meanwhile, migrants are hearing that the UK’s doors are closing to them and making other plans.

Migrants have got the message – free movement is ending

The statistics show the number of EU citizens coming to the UK for work has fallen to its lowest level since 2004, the year that Poland and seven other central and east European states gained free movement. EU net migration has fallen consistently since the referendum, while non-EU migration has increased, mainly because of an increase in international students. 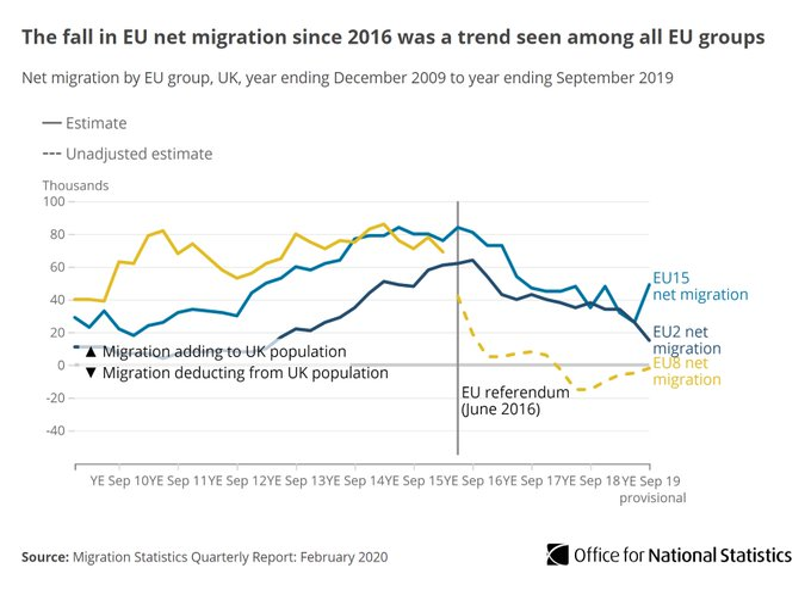 There has been little robust research on the reasons for the fall in migration tracked by the ONS since the referendum. Employers consistently report three main factors: the fall in the value of sterling, economic improvement in their home countries, and the hostile environment towards migrants.

It is also highly likely that potential migrants are under the impression that free movement has already ended. The process of leaving the EU and the migration policy proposals are so complex that they could be forgiven for this misunderstanding.

Frequent statements about an Australian points-based system from the Home Secretary, among others, send across a strong message that migrants without higher level qualifications will not be part of the UK’s high-tech, high-productivity future.

Alongside the reduction in migration, public attitudes have taken a more favourable turn. Opinion polls have consistently found that the British public would like to see immigration to the UK reduced, but, as Ipsos Mori surveys have found, this is changing, with the shift dating from the year of the EU referendum. 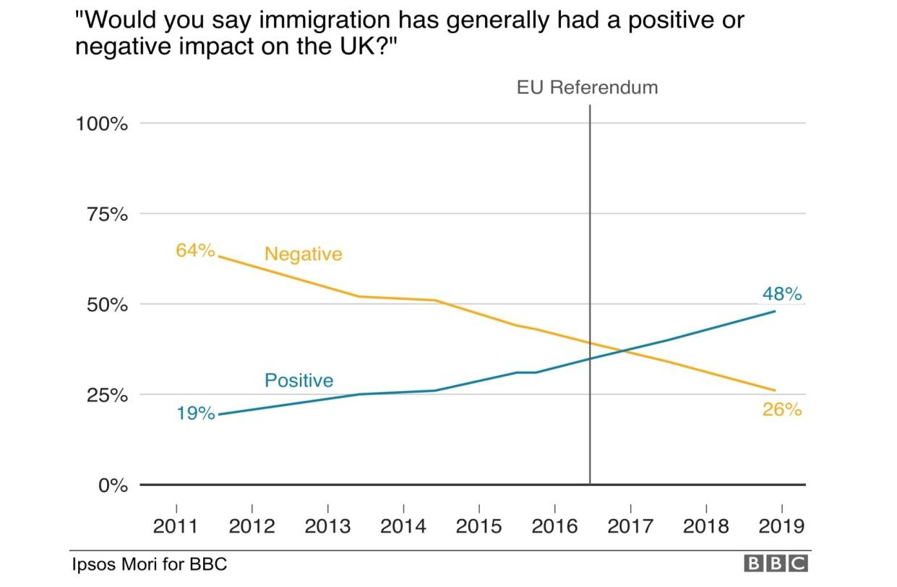 The reasons for this change in direction have been explained by the ‘galvanising’ effect of the referendum and expectations that immigration will now be brought under control.

However, more detailed investigation, also by Ipsos Mori, has found other factors have played a stronger role: most significantly, discussions in recent years have raised awareness of the contribution of migrants to the UK.

This shouldn’t really be a surprise since, if we didn’t talk about immigration in the past, we certainly do now. And it has clearly had positive, as well as negative, impacts.

Connections, and perhaps stronger appreciation of the migrants people encounter in everyday life, have also moved attitudes in a more positive direction. Fewer than one in four people attribute their shift in views to a belief that migration will fall. 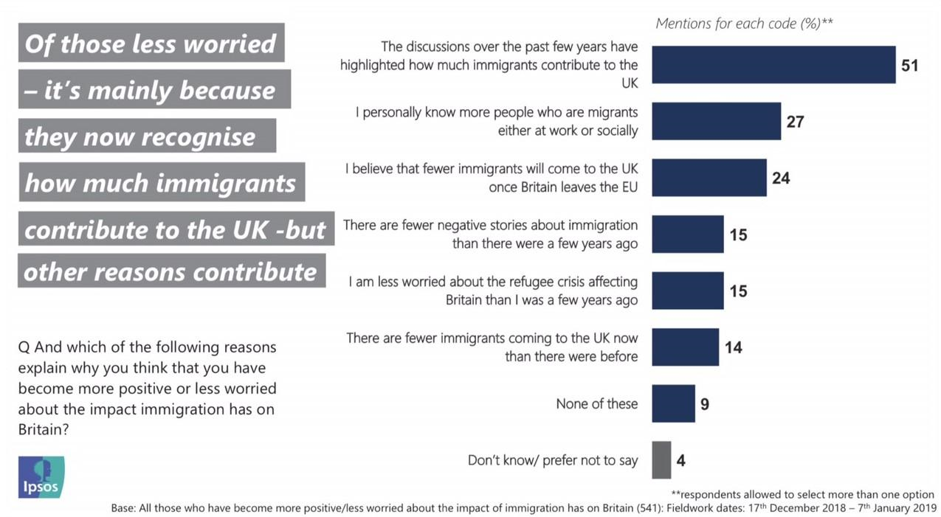 The Conservative Party has a long-standing aim to reduce immigration and has enshrined this into the policy announced last week. It’s a skills based policy, but one which uses a narrow technical understanding of skill based on qualifications.

As such, it allows no route for people with lower than intermediate level qualifications. This central, and currently inflexible component of the policy, will severely affect sectors such as social care, food processing, construction and hospitality.

Not only is it inflexible, creating serious recruitment difficulties for employers – it’s also a misreading of public attitudes. Focus group research has found that the public are less concerned about skills and more interested in the contribution a migrant makes, which can include working as a fruit picker or waiter.

‘Low skilled’ workers such as builders and care workers are certainly seen as skilled contributors. Thus, it seems, the definition of skill used in the immigration proposals are those of an economist, and are out of step with public understanding.

In practice, the public is much more relaxed about low skilled migration than is often assumed.

The government has consistently presented high levels of net migration as a problem for the UK. But today’s figures look like a bigger problem is on the horizon – that migrants may cease to see the UK as the attractive destination they once did.

In the government’s concern to exercise control and reduce numbers it has both misread public opinion but also forgotten about the people it should be paying most attention to – those who might bring their skills and abilities to contribute to the industries, services and life of the UK.

By Dr Heather Rolfe, Director of Research at Demos.