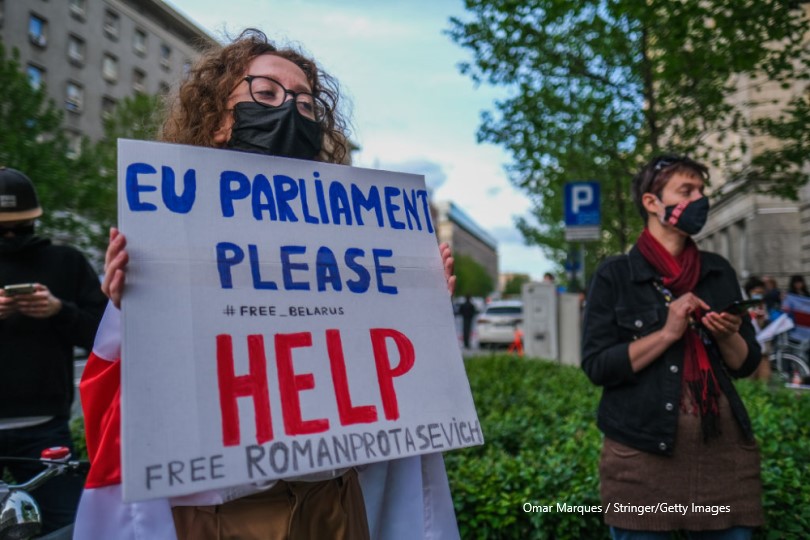 A week ago, Belarus provoked international outrage when authorities diverted a Ryanair flight to Minsk in order to arrest Roman Protasevich, a prominent opposition journalist and his partner, Sofia Sapega. The ‘skyjacking’ was without exact precedent and was described as an act of ‘aviation piracy’ against a European airline by the Irish Minister of Foreign Affairs.

The EU has often been criticised for inaction on important foreign policy issues. In this case, however, the response was swift and decisive. At a meeting the following day, EU leaders agreed to impose new, targeted sanctions on Belarus, including measures to ban overflight of EU airspace by Belarusian airlines.

The EU response was also boosted by the support and action of others. Several countries, including the UK, restricted flights to and from Belarus, and a statement by G7 Foreign Ministers and the EU High Representative on Thursday threatened ‘further sanctions as appropriate’, hinting at an incremental escalation of restrictive measures.

That the EU chose to deploy sanctions against Belarus was no surprise – they are well-established as the diplomatic tool of choice for policymakers seeking to regulate behaviour in the international system.

Indeed, the EU frequently deploys restrictive measures as part of its efforts to influence foreign policy issues, and the bloc currently has some 40 sanctions regimes in place. Their attraction lies in the potential for the sender to achieve coercive influence through economic and other disruption, without the need to resort to military force.

So what are these sanctions trying to achieve and are they likely to be successful?

EU sanctions on Belarus have several objectives. The first objective is to send a clear signal that this type of behaviour is unacceptable and will have painful and disruptive consequences. Holding President Lukashenko accountable for his actions is an important part of maintaining the credibility of the EU as a global actor of influence.

Building on this, the second objective is to deter similar future behaviour on the part of Belarus. Failure to act now could also encourage other autocratic states to adopt similar tactics down the line. The third and most challenging objective, communicated as a demand in multiple press releases, is to secure the release of Protasevich and Sapega.

Beyond these more specific objectives, EU leaders have tied the coercive effort here to a far broader effort to induce democratic change in Belarus. Much has been made of a €3 billion plan of economic support for a future democratic Belarus.

The problem with sanctions is that their effectiveness depends heavily on the context in which they are deployed. And there are at least three factors that undermine the EU’s coercive effort here.

The first factor relates to the susceptibility of the target. For example, the value to be gained from placing restrictions on trade with a target state is limited if trade links with the sanctioning actor were poor to begin with. Or if, as in this case, the target has another significant market that it can turn to.

The EU does have a consequential trade relationship with Belarus – it is the second main partner, representing almost 20% of the country’s trade – but nothing like that of Russia, whose share is almost 50%.

Russia will only be too willing to help Belarus offset the impact of sanctions through increased trade and other economic support. Indeed, President Putin has already signalled his support for the Belarusian government.

For years now, Moscow has been concerned by the EU’s efforts to promote democracy and develop closer economic ties with Belarus.

And in the past, Lukashenko has tried to play on these concerns, making concessions to European interests to increase his leverage with Moscow. More stringent EU sanctions will help counter this trend as Lukashenko now desperately needs Russian support.

The second factor relates to the domestic political context in Belarus. After 27 years in power, President Lukashenko was left fighting for political survival last August after a rigged election led to mass protests. A crackdown on protesters and opposition figures allowed the dictatorial leader to reassert his authority, but deep resentment continues to simmer in Belarusian society.

In this context, Lukaschenko likely judges the value to be gained from silencing prominent critics to outweigh any sanctions the EU might impose. The extraordinary arrest of Protasevich also sends a strong message to opponents: the regime will take extreme steps to maintain power.

Closely linked to this, the third factor relates to the costs that the EU is willing to impose. Belarus has been sanctioned before and the costs have always been manageable. This time, the EU will go further, but it is unlikely that the bloc will do enough to threaten that which Lukashenko values most – the survival of the regime.

That said, the €3 billion aid package that the EU is preparing could be seen as compounding the threat posed by sanctions. An incentive intended to rally the Belarusian opposition and feed into regime change, rather than to tempt Lukashenko to change his ways.

This, incidentally, links back to Russian interests, and is something Moscow will be monitoring closely. Lukashenko may be a handful for Moscow, but he is far preferable to a pro-European opposition government.

None of this is to suggest that sanctions on Belarus represent wasted effort. It was critical for the EU and partners to respond quickly and firmly to Lukashenko’s abhorrent actions. But it is far from certain that the EU will achieve its objectives here.

By Matthew Moran, Professor of International Security in the Department of War Studies at King’s College London.