For many, the EU Settled Status (EUSS) application is a simple process. If you can access the online platform, and you have the correct documentation, a historical record of residence in the UK and English language skills, the application can be done in approximately 10 minutes.

A right to remain in the UK after Brexit can be secured in the time it takes to make a cup of tea. In fact, the Home Office has used the cup of tea analogy in much of their marketing, to highlight how simple and quick the application is.

And the Home Office can claim success: 4.5 million applications have been made to the scheme, nearly a million more than the number of EU nationals estimated who needed to make an application (although as we have discussed previously this number was always incorrect). 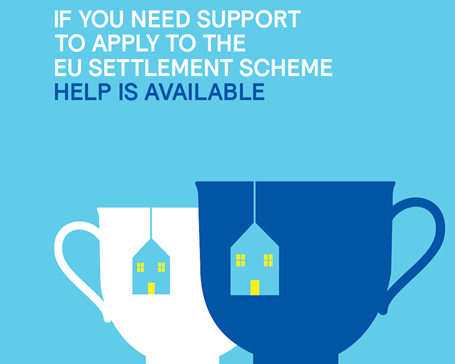 However, sitting in an EUSS appointment session on a rainy Friday in Great Yarmouth, Norfolk, we came across a very different story.

Great Yarmouth had one of the highest Leave votes in the 2016 Referendum, at 71.5%. It is a town which faces many challenges presented by localised pockets of deprivation, high levels of need and above average levels of long-term unemployment.

Twenty-two per cent of working age residents in Great Yarmouth do not have a recognised qualification compared to fifteen per cent across England and Wales. In the last year, the borough has seen a 59% increase in the number of applicants to Universal Credit.

The district has also seen a significant increase in migrant communities over the past 10 years (as shown by ONS census data in 2001 and 2011) with people from countries including Portugal, Latvia, Lithuania and Poland settling in the town. To date, the borough has had 6,270 applications for EUSS.

It is within this setting that GYROS, a specialised immigration, information, advice and advocacy charity, supports migrant communities in the town. In the previous 12-months GYROS has supported over 1,000 people to make applications for their EUSS – that’s one in six of all applications in the borough.

Observing the appointment clinic, it was clear that for some EUSS is not a simple process. Due to Covid-19 restrictions and precautions, GYROS now undertakes most of their support over the phone.

Yet it is still offering some face-to-face sessions for those who need it. The minimum time for an appointment is one hour for these more complex cases  – a very long cup of tea.

Some take even longer: one advisor waits on hold calling the EUSS resolution centre for 45 minutes, while her client sits with her the entire time (two metres apart, naturally). In total his appointment takes one and a half hours to complete, but an application is made by the time he leaves.

For those who don’t have valid or in-date identification documentation, the process takes even longer. GYROS supports one Lithuanian national to book an appointment to attend his embassy in London in order to get new ID so he can then make his EUSS application – but travel was made impossible during lockdown.

Others they’re helping lack the relevant paper trail needed to evidence their life in the UK, especially those who have been homeless, rough sleeping or in precarious or non-standard housing where they might not be able to prove their address.

A lot of work and time is taken trying to unpick people’s biographical histories in the UK so that they can access the status they are entitled to.

One non-EU family member of an EU national who is a victim of domestic abuse needs help to apply for EUSS for herself and her children. However, she has been moved to four different temporary accommodation locations across two different counties in the last five weeks.

She also doesn’t have all of her documentation as some still sit with her abuser. In the meantime, GYROS is trying to organise a date when they can see the mother face-to-face because an appointment over the phone isn’t feasible for her and her young children.

Non-EU family members of EU nationals face particular challenges, such as the increased evidential burden associated with this type of application to the scheme, as has been reflected in both the higher rates of pre-settled status and significant refusal rates within this group.

Advisors mention that the reality is that many EU nationals and their family members still have never heard of the EUSS scheme. Few who attend the clinic know or use the terminology ‘EUSS’ or even ‘Settled Status’ – the scheme is often referred to as ‘the Brexit application’ or ‘residency’ by most.

Fewer still understand what pre-settled status means, and the fact that they might need to re-apply in the future. Many see this as a ‘one and done’ application.

Those who need this specialist support are often without the relevant digital and/ or English language skills to make their initial application, and this will continue to cause issues for them in the future given the ongoing maintenance the EUSS status requires.

GYROS, like most migration advisory charities across the country, are busier than ever. They have seen a 58% increase on enquiries for support in the last year.

Migrant workers and others living in Great Yarmouth have already been directly affected by Covid-19 outbreaks in local poultry factories where a majority of people from migrant communities work. Eviction, homelessness, poverty, and debt are rising exponentially for many EU migrants and their families.

“People have urgent issues they need help with, and some are putting off EUSS because first they need help to keep a roof above their head or put food on the table.” (Immigration advisor, Great Yarmouth).

GYROS’ biggest worry is that even pre-Brexit and pre-Covid-19, January is always their busiest time, as many of those working in poultry factories in the run-up to Christmas find themselves without work and often then also without the accommodation attached to that work.

This year, many might find themselves out of work, homeless, out of the Brexit transition period and in the middle of a pandemic.

So, EUSS is a tale of two citizens. For EU nationals living in places like Great Yarmouth, for whom the EUSS process is not a ‘cup of tea’, may struggle to complete their EUSS application before June 2021. Many are at risk of falling through the gap.

By Professor Catherine Barnard, senior fellow at UK in a Changing Europe and Fiona Costello, research associate, University of Cambridge.