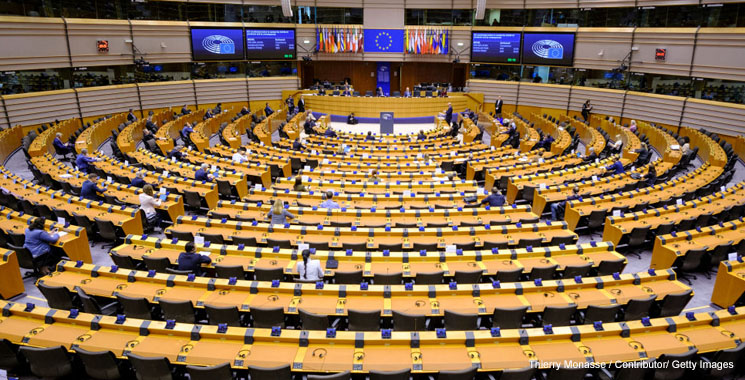 EU leaders meet on Friday for their fifth (and possibly last) European Council summit by videoconference since the coronavirus outbreak. European Council President Charles Michel accepted as much in his invitation letter to EU leaders: ‘Our meeting on Friday should be a crucial stepping stone towards an agreement at a subsequent physical meeting.’

Just as the UK-EU negotiations have suffered from a lack of face-to-face contact, physical proximity is widely recognised in Brussels as important in bringing about a compromise here too.

As with all EU summits, there has been a build-up of media interest in the run-up, publicising tensions and divisions between member states. But look below the surface and a couple of things are clear: they are not divided on everything and they are not irreconcilably divided on anything.

Mr Michel has said EU leaders are already nearing consensus on several issues including on the need for a substantial EU-level response to the crisis financed by European Commission borrowing on financial markets, that the MFF and recovery plan should form part of the same package, and that the response must also address the EU’s digital and climate priorities.

Nevertheless, the big questions about the recovery fund remain unresolved: How much? For how long? In what form? Who gets it? How do they get it? What are the terms & conditions? How is it funded? All this needs to be agreed, albeit not necessarily at this meeting.

There are, broadly speaking, two camps in the debate: those supporting (or at least accepting) the general idea of the Commission proposal and the ‘Frugal Four’ – Austria, Denmark, the Netherlands and Sweden – plus Finland.

The first camp crucially has the backing of France and Germany, on whose joint initiative the Commission proposal was partly based. There are varying degrees of enthusiasm and support in this camp, but none is likely to present a major obstacle to a deal.

The same cannot be said of the Frugal Four plus Finland, who oppose some of the basic principles of the Commission proposal, albeit they have been more constructive than is often portrayed.

So what are the disagreements? They basically come down to three main issues.

The first is loans versus grants in the recovery fund. Several months ago there was a fraught debate among EU governments about issuing shared debt known as coronabonds.

The recovery fund proposal does not use this term, but it appears to come pretty close to the idea: the Commission would fund the recovery plan by issuing bonds (debt) on financial markets, two-thirds of which would be funnelled to member states as grants, which do not require repayment.

This debt would then be repaid by common EU funds, the sources of which the Commission wants to expand.

The Frugals argue any funds should only be given to member states as loans, with accompanying conditions, to ensure that funds are used effectively.

The more highly indebted member states argue this simply burdens them with more debt and would only delay their recovery and leave them vulnerable to interest rate rises. The final result will probably be a combination of the two, but it is unclear what the ratio will be, whether 2:1 as proposed, or something less.

The second area of disagreement is over what is called the ‘Own Resources ceiling’ in the MFF. This is the legal maximum amount of money that the EU can raise in a budget period. Currently, this is set at 1.2% of the EU economy.

To allow space to raise money for the recovery fund, the Commission proposes lifting the ceiling to 2%. In theory, this would only be temporary until the debt had been repaid. However, given that repayments could run until 2058, it stretches to the extreme the definition of ‘temporary’.

Needless to say, the Frugals are sceptical and the Dutch government has said it is ‘critical of the proposal … and the amount of the increase, and will ask for further justification of it.’ The concern about the size of the increase in the ceiling rather than the principle probably hints at some compromise being available between 1.4% and 2%.

The third main area of disagreement is over new sources of funding in the EU budget to repay the debt from the recovery fund. The Commission has suggested four new sources (on top of previously proposed EU corporate and plastic taxes): extending the emissions trading system, a carbon tax on imports, a single market levy and a digital tax.

These would be expected to bring in around €20 billion per year, which the Commission argues would be sufficient to cover debt repayments for the recovery plan. The Frugals are reticent to agree to all such new funding sources.

Many of the issues of disagreement fall comfortably within the scope of ordinary MFF negotiations. The size of the budget, its distribution and the sources of EU funding are all ever-present features. What is new is the idea of the Commission borrowing on such a scale to distribute grants.

The proposed MFF is roughly €160 billion per year whereas the recovery fund, whose resources will only be utilised in the first four years (2021-24), could average €190 billion per year in those four years, depending on how much member states utilise it. It is a substantial intervention.

The funding gap left by the UK is also an issue. However, the Brexit hole has been overshadowed by the response to Covid. The UK’s net contribution was around €70 billion over a seven-year budget cycle.

The recovery fund foresees spending up to €750 billion in the first four years alone, more than ten times the UK contribution. Thus, the current context has made it somewhat of a secondary issue.

But the UK’s exit has also created opportunities, not just difficulties. It is possible – and some such as Ivan Rogers deem it almost inevitable – that the recovery fund proposal, and certainly its proposed shape and size, would not have reached conception had the UK still been a member state.

The UK would almost certainly have agreed with the arguments of the Frugal Four and, in all likelihood, gone even further. We may be seeing, just months after the UK’s exit, the fruition of a major EU policy that would have been impossible had the UK not left.

By Matt Bevington, researcher in public policy and foreign affairs at the UK in a Changing Europe.