The UK’s exit from the EU and its institutions has allowed the European Parliament to go a small way in reducing the inequities in national representation which had built up.

The number of members of the European Parliament (MEPs) that each member state has is based on several criteria.

First, each member state must receive a minimum of six seats and no more than 96. Second, no member state should have fewer seats than one with a smaller population.

Brexit has allowed the Parliament to fix some seat distributions

Prior to the UK’s exit, a number of inconsistencies had developed. For instance, Sweden had a larger population than Hungary yet one less seat. France, Italy, Spain and the Netherlands, among others, had relatively few MEPs for the size of their populations.

This was in part because the previous seat distribution was agreed in 2013 and failed to reflect more recent population trends.

The European Parliament and Council used Brexit to do three things: redress these imbalances, ensure no member state lost any seats and reduce the overall size of the Parliament.

They achieved this by redistributing 27 of the UK’s seats to 14 member states. In seat numbers, the biggest winners were France (+5), Spain (+5), Italy (+3) and the Netherlands (+3). The remaining 46 seats were left unfilled, leaving 705 in total.

Proportionally, Ireland gained the most, increasing its overall seats by almost 20% (two seats). 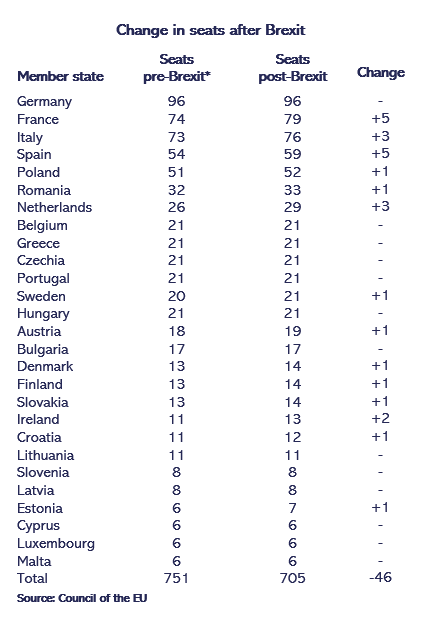 In its decision, the Council proposed that these remaining seats could be reallocated in future to any new member states or be used as joint constituencies should EU-wide candidates stand in European elections in future.

The seat changes are just a temporary fix. The Council has asked the Parliament to propose a new seat distribution prior to the next European elections in 2024. This is a necessity given the different population trends in member states, on which seat distribution is mostly based.

As the chart below shows, aside from the three least populous member states—Malta, Luxembourg and Cyprus, whose populations are so small they will continue to receive the minimum six seats—the trends are generally towards the larger, richer, western member states. 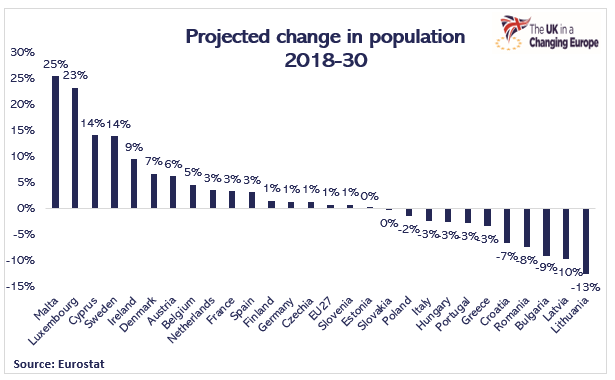 These trends also have implications for the distribution of voting power in the Council, which is largely based on population size as well.

There has been plenty of debate about how to reform the seat-distribution process. The trouble is alternative methods only favour the larger, western member states, further shifting the balance towards them.

In the short term, these changes are largely manageable through piecemeal adjustments. However, there is a bigger question in the long term about further reforming qualified majority rules to ensure smaller member states, with decreasing voting power in the EU’s institutions, are not ignored.

Yet in a context where all talk of reforming EU decision-making is towards simplifying procedures to make the EU more effective, it seems unlikely this will be taken seriously any time soon.

Demographic problems have worsened with the UK’s exit

Plus, seat redistribution cannot improve the representativeness of the Parliament demographically.

While the UK’s exit may have allowed some representational imbalances to be addressed, it has worsened demographic imbalances.

On gender, for instance, 42% of UK MEPs were women, slightly above the average of 40%. This means that the proportion of women in the Parliament has fallen slightly since the UK’s exit.

On ethnicity, too, people of colour constituted 8% of UK MEPs, substantially more than the 4% average in the Parliament. The ethnic minority share of MEPs has now fallen to just 3% with the UK’s exit.

Diversity of MEPs is a problem that the Parliament itself cannot address. That comes down to the political parties who control candidate lists in elections.

It is ultimately national political parties that will determine whether the Parliament is genuinely representative of the EU population.

One of the reasons there is a lack of pressure to do so is that Eurostat, the EU’s statistics agency, does not even collect data on ethnic and racial heritage.

As a result, there is no clear picture of the lack of representativeness in all EU institutions, which we know anecdotally exists.