EUSS and the Census: have claims about the UK underestimating EU migration been overstated? 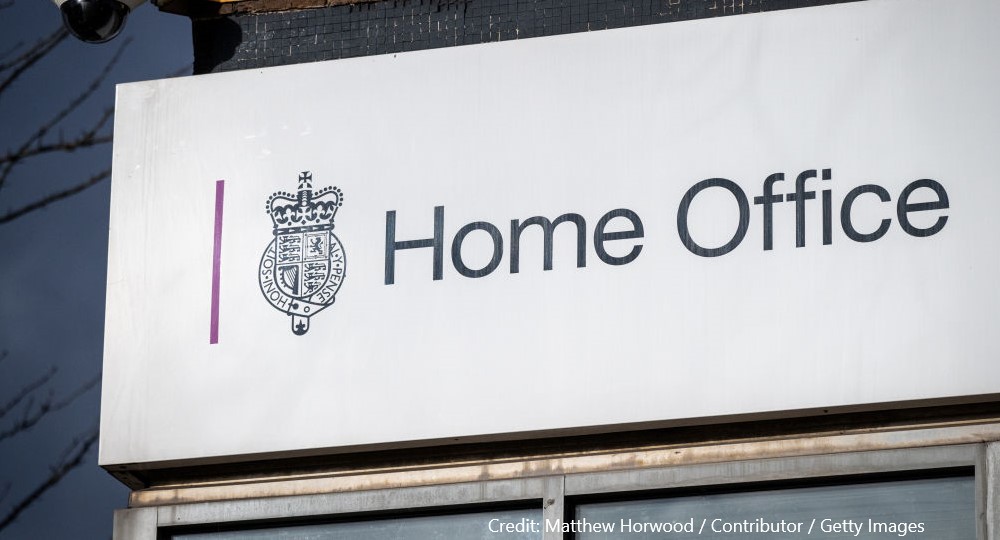 The number of applications to the EU Settlement Scheme (EUSS) has been widely reported as a sign that the UK’s official estimates of the population of EU citizens have been too low.

In 2019, the Office for National Statistics (ONS) estimated that there were around 3.7 million EU citizens living in the UK. By the year ending June 2021, the most recent figures currently available, this estimate had fallen to 3.4 million, due primarily to some combination of emigration during the pandemic and a decline in the quality of the statistics due to Covid-19.

By the end of 2021, the Home Office had received more than six million applications to the EU Settlement Scheme. After removing repeat applications from the same people (namely those who applied once to get temporary pre-settled status and again to upgrade to permanent settled status), and after excluding non-EU citizens who are also eligible for the scheme, there were almost 5.3 million EU citizen applicants by the end of last year. This leaves a gap with the official EU citizen population estimate of somewhere in the order of 1.5 to two million people.

Migration data nerds, including at the ONS and (me) at the Migration Observatory, have warned against assuming that the EU Settlement Scheme statistics are ‘better’ and that the gap results purely from an underestimate of the EU population. While it is very likely that official estimates do understate the EU population to some extent, there is another important part of the picture, namely that some people who applied to EUSS actually no longer live in the UK.

How many EUSS applicants actually still live in the UK remains uncertain. But an early glimpse of Census figures for England and Wales, released by ONS in response to the Ukraine crisis, providing some useful new evidence. As I explained here, the figures are not final as they haven’t yet been adjusted to account for people who didn’t respond to the Census (an estimated 3% of households), and they will be adjusted up a bit. But they provide an early indication that the migrant population from some key EU countries is not as large as some commentators assumed when looking at the EU Settlement Scheme figures.

There are many differences between the figures so the discussion below is really just intended to illustrate the direction the data are starting to point in.

First, we cannot yet directly compare the Census figures to the EUSS because the early-release Census figures are only by country of birth and EUSS figures are by citizenship. EUSS includes UK-born children who are not UK citizens, and EU citizens born outside the EU (such as Latin Americans who migrated to Spain before moving to the UK); the Census data meanwhile include EU-born UK citizens who are not eligible for EUSS. These things won’t entirely cancel each other out. In 2019, for example, ONS figures suggested that for most of the Eastern European countries, there were slightly more migrants by citizenship than by country of birth, due to UK-born children. However, the gap was not very large (usually around 10%).

Various other caveats are outlined here. In addition, we only have Census data currently for Eastern European countries, and the picture could be quite different for other EU member states.

Figure 1 compares the number of Census responders from seven eastern European countries of birth, with official population estimates (by country of birth and nationality) on the one hand, and EUSS applications on the other hand. Data are presented for 2019 because the data became less reliable during the pandemic. The two factors just described mean that the gap between the Census (yellow) and EUSS figures (light blue) is actually already smaller than the headline figures suggest. 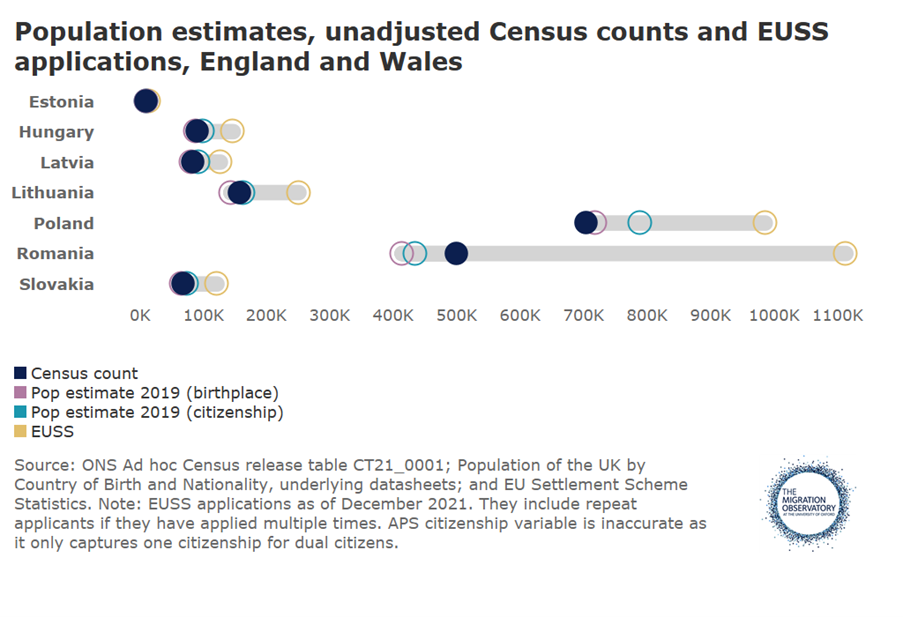 So what can we conclude? First, the 2019 ONS population estimates are closer to the equivalent Census count than they are to the EUSS application figures.

The Census figures will be revised upwards and the citizenship numbers may be higher than the country of birth numbers, but these adjustments would need to be very large to bring them anywhere close to the EUSS numbers. In other words, the data provisionally provide some empirical evidence that EU Settlement Scheme statistics are not a good guide to the size of the migrant population in the UK.

The Census figures do suggest that the foreign-born population from certain EU countries has been underestimated. In particular, the count of Census responders born in Romania is considerably higher (21%) than the official population estimate. The final Romanian Census figure will be revised up slightly to account for non-response. But it is unlikely to come close to the roughly one million EUSS applications.

An important and often ignored feature of the EUSS application statistics—in addition to the now relatively widely understood point that they include some duplicates—is that some of those who applied to EUSS will no longer live in the UK. The EUSS has been open for more than three years, and anyone who lived in the UK during that time, no matter how briefly, was potentially eligible to apply. Over the years there has been substantial emigration and short-term migration by EU citizens.

Using EUSS figures as an indication of the number of EU migrants in the country is thus likely to lead to an overestimate, particularly for countries of origin that have higher levels of temporary migration and thus more likely to have seen EUSS applicants who no longer live in the UK. The Census data give an early suggestion that at least for some countries of origin, this explanation could be quite important.

By Madeleine Sumption, Director of the Migration Observatory at the University of Oxford.

Thanks to Alan Manning and Chris Stickney for comments on an earlier draft of this blog. Any errors are the responsibility of the author alone.