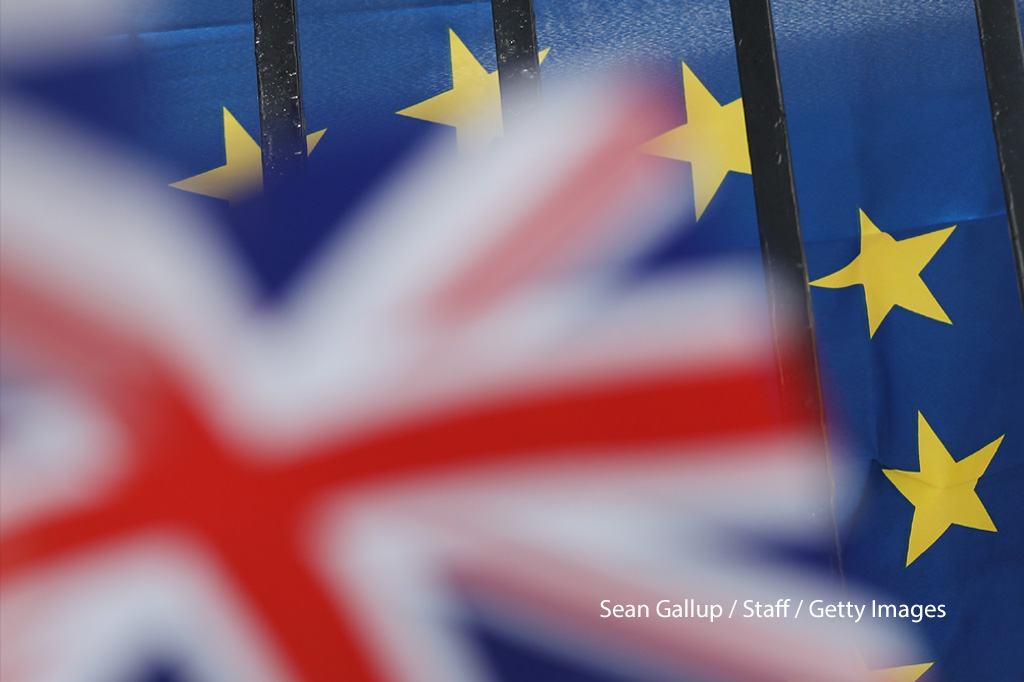 The deadline to apply for EU Settled Status is just seven days away. All EU nationals living in the UK (adults and children), need to make an application under the EU Settlement Scheme (EUSS) before 30 June 2021 – so in a week’s time – to secure their continued right to live and work in the UK.

As well as EU nationals, Norwegian, Icelandic, Liechtenstein, Swiss nationals and any non-EU national family members (NEFM) living in the UK also need to make an application to EUSS to secure their rights. Irish citizens can apply to the scheme but do not have to.

From 1 July 2021, EU nationals (EEA/EFTA) and their NEFMs will be expected to demonstrate their immigration status in their day to day lives to access welfare benefits, housing, health care, and employment.

In 2019 EUSS was described by Amelia Gentleman as the ‘gateway between belonging and exclusion’ and that gateway is shortly closing.

No such large-scale regularisation scheme has ever reached 100% application rate, and it was always expected that some would miss the deadline by which to apply. This week The Times revealed Government estimates that about one in six of the total number of EU citizens who claim benefits have not applied for settled status.

The Department for Work and Pensions (DWP) has written to those they think should have applied to remind them to make an application.

“We were already fighting against the tide, we have to turn people away at the moment our drop-ins are so busy and we are giving everything to help people get their applications submitted before the deadline.

On top of this, we now also have people coming in distressed about updating their EUSS on their UC and worried their payments might stop – it is unmanageable.

We have been consistently telling people they don’t need to prove their status until 1 July – and now because of DWP this is not true, they’re being asked now and have to react”. Immigration Adviser, Norfolk

For GYROS – the charity we work with in Great Yarmouth, Norfolk –  these letters and updates have caused panic and distress for their clients. This has in turn more than doubled Gyros’ workload as the deadline approaches (see fig1).

Now they have clients coming in to update their UC status (see fig 2) while also trying to support those who still need to apply for their EUSS. This week alone (Monday and Tuesday) they helped over 100 people across two drop-ins, one in Ipswich and one in Great Yarmouth – and almost 400 people this month.

Numbers of people accessing support to apply for EUSS is still increasing each week as the deadline approaches. Reports confirm this increase nationally with a surge in applications with some 10-12,000 applications submitted a day at the moment. 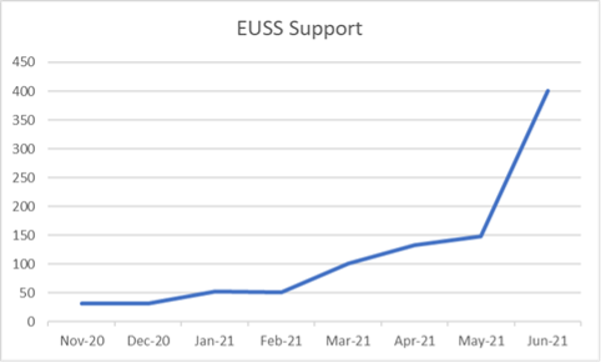 One Portuguese national has been coming to drop-in sessions in Great Yarmouth since the start of June. He initially came for help applying for EUSS but his ID had expired, and so GYROS needed to request and wait for a paper form.

He came to GYROS at the time before paper application forms went online (on 9 June) and his application was submitted at the end of last week. He still cannot update his UC as he does not have a status – only a submitted application. He now joins the back log of (at least) 400,000 people already in the Home Office system waiting for a decision. He was worried his income would stop on 1 July.

The Government announced on 23 June that welfare benefits will not be stopped on 1 July. For those identified as having missed the 30 June deadline, a new immigration enforcement procedural step has been introduced – whereby they will be sent a formal notice of a further 28 days in which they now need to apply.

For organisations like GYROS, and others, this will mean continued demand for services. One advice agency in Norwich is already booking appointments for July this week, and so those who come after the deadline might struggle to be seen within 28 days of this notice.

Another worry is around those who are in receipt of welfare benefits and become undocumented on 1 July.

There are fears that any benefit paid to them after this date could be considered to have been paid incorrectly (on the grounds that they have been unlawfully resident in the UK since the deadline date) and so the DWP could seek to recover any overpayment.

This would push undocumented people struggling to regularise their status into debt.

It is unclear what problems this limbo could cause to these individuals while their status is regularised via a late application, or if any payment they receive in this period would still be considered incorrect. This will be further complicated if their application is refused for any reason.

Research has consistently shown that there will be groups who are more vulnerable to missing the deadline, such as those who are older, children in care, and Roma communities.

Despite the news that formal notice will be sent in writing to those identified who do not apply by the deadline telling them they have 28 days, the fact is that there is no ‘register’ of EU (EEA/EFTA/NEFM) citizens in the UK who need to apply. The Government has no way of knowing all those who missed the deadline, and for some it could be months, perhaps years before they realise they are undocumented.

The 28-day ‘grace’ period and written formal notice is surely a good thing, but it raises the question of what happens to those who have not applied by the end of the 28 days.

Further, we could end up with a situation where some people receive formal notice of 28 days, and others do not. Does this notice help as evidence ‘reasonable grounds’ for late applications?

By Catherine Barnard, senior fellow at UK in a Changing Europe and Fiona Costello, Research Associate at Cambridge University. To find out about more about the Settlement scheme, read our latest report.