Everything you think you know about Leavers and Remainers is wrong 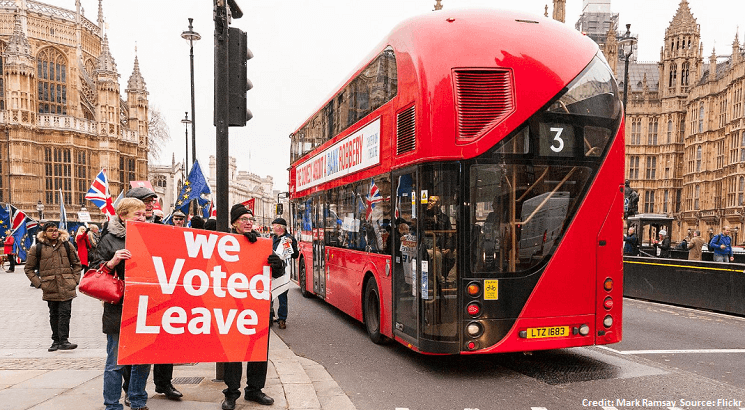 It is commonly assumed that Leave supporters want to leave the EU — regardless of the type of Brexit — more than Remain supporters want to remain. But a new YouGov survey of over 1,600 British citizens carried out by academic researchers shows it is wrong. In fact, the opposite is true.

While 33 per cent of the country now want a no-deal Brexit, 42 per cent say it is their least-favourite outcome. Our survey also shows that support for the Brexit Party is higher among financially comfortable voters — adding to previous research showing that support for no-deal is also higher in that group.

The survey asked respondents to rank the following potential Brexit outcomes in order — no-deal, Theresa May’s withdrawal agreement, a softer Brexit and remaining in the EU. It then asked people how much they preferred each option to the one ranked below it. For example, someone who had ranked no-deal as their first choice and May’s deal as their second choice was then asked whether they preferred no-deal “a bit”, “a fair amount” or “a lot” more than May’s deal. 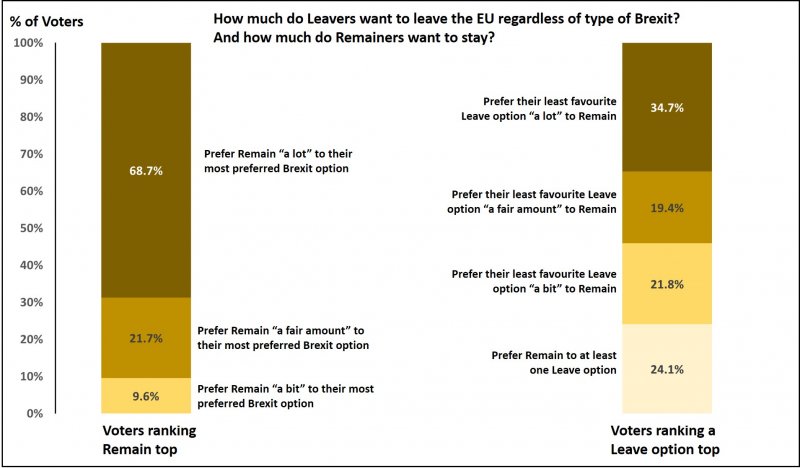 This is an important finding. Why? Several prominent politicians have argued that leaving the EU with some form of soft Brexit would be a reasonable compromise. Their reasoning is that Leave voters simply want to get on with leaving, and do not care much about the manner in which the UK exits the EU. They assume that giving Leavers what they want would then open up the space to implement a softer Brexit deal of the kind Remainers would be able to live with.

These results show that neither part of the argument stacks up. Many Leavers do have strong preferences between different Leave outcomes. Forty five per cent have at least one option that they prefer “a lot” over another Leave option. Almost a quarter (24 per cent) feel so negatively about some of the Leave options that they would prefer to Remain rather than see it implemented.

What this means is that whichever way the government chooses to leave the EU will end up making a large number of Leavers unhappy. As for Remainers, the fact of leaving the EU itself would also make many of them unhappy, even if the UK left with a soft Brexit. Only 10 per cent of them say they only prefer Remain “a bit” to their most preferred Leave option.

Neither our survey or the recent European parliament election results provide much evidence that most voters — whether Leavers or Remainers — would accept a compromise.

There are big implications for the political parties

The recent EU elections and subsequent polling suggests that both Labour and the Conservatives potentially face catastrophic losses in the absence of a Brexit policy that appeals to the majority of their voters. In this survey, more than half of voters for each party currently say they will vote for a different party in a new general election. 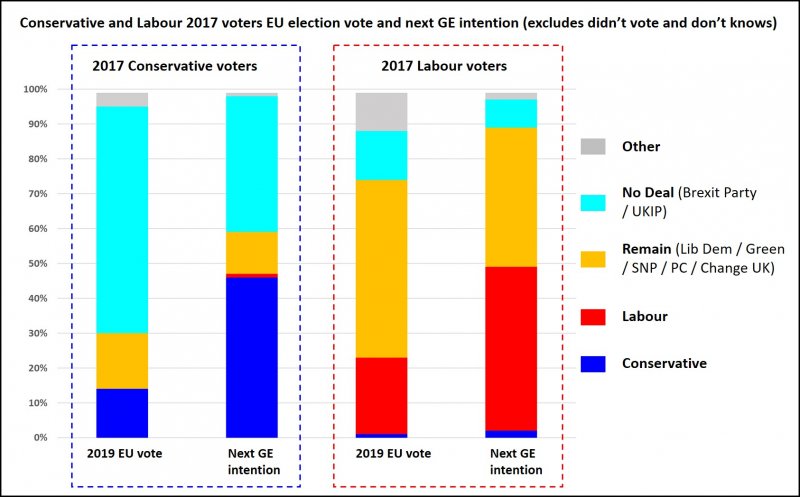 Since a similar survery in March, the number of people preferring a no-deal outcome has risen from 27 per cent to 33 per cent of all voters, despite continued warnings from the vast majority of economists and experts who believe it would be deeply harmful to the economy. Most of the increase is accounted for by a drop in support for May’s deal but there remains a clear two-to-one majority against no-deal in the population — in fact 42 per cent of all respondents ranked no-deal as their bottom choice.

A clear majority of Leave voters prefer no-deal (59 per cent, up from 53 per cent in March), but a significant minority prefer either a different Leave option or now want to Remain. 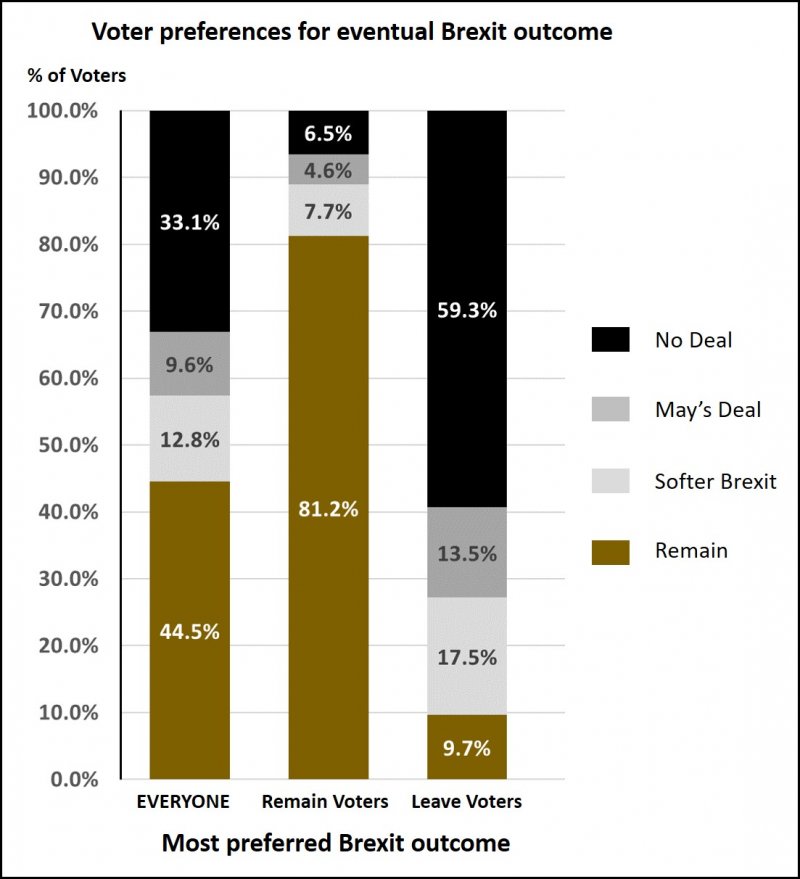 There is a common narrative that the Brexit Party’s vote, and the desire for a no-deal outcome, is driven by “left behind” voters. After the referendum, a lot of research focused on the fact that Leave voters were disproportionately working class and tended to live in areas that had been impacted by globalisation and the loss of manufacturing industry.

However, instead of looking only at class, the survey asked respondents how easy they found it to manage financially. We found there to be very little overall difference in the financial circumstances of Remainers and Leavers.

If anything, Leave voters are more likely to find it easy to manage financially. The March survey showed that support for no-deal was driven by Leave voters in more comfortable financial circumstances and the latest survey has found that they are also the most likely to have voted for the Brexit.

Those who are the most vulnerable to an economic downturn are more likely to have rejected both. Leave voters who found it very difficult to manage financially were the most likely group to have switched their support to Remain and less likely to have voted for the Brexit Party or Ukip.

Support for no-deal is also related to age. Forty eight per cent of voters over 60 rank it as their first choice outcome, compared to 17 per cent of 18-to-30 year olds. Equally, 40 per cent of those over-60 voted for the Brexit Party in the European parliament elections, whereas only 11 per cent of people under-30 did so.

By focusing on class, much of the Brexit narrative has missed the nuance that older working class people might own their own homes outright or live in secure social housing, with their pension income protected by the triple-lock, and as a result might be less worried about an economic downturn.

Overall, the survey results issue a strong challenge to many of the assumptions that have been made about both Remain and Leave voters. With both main political parties seeing supporters defect in devastating numbers, a better understanding of where the public is will be vitally important as we enter the final months before the deadline for the UK to leave the EU.

By Christabel Cooper and Christina Pagel, data analyst and Professor of Operational Research at UCL. This piece was originally published in the New Statesman. The YouGov survey was jointly funded by The UK in a Changing Europe, the UCL Clinical Operational Research Unit and the UCL European Institute.