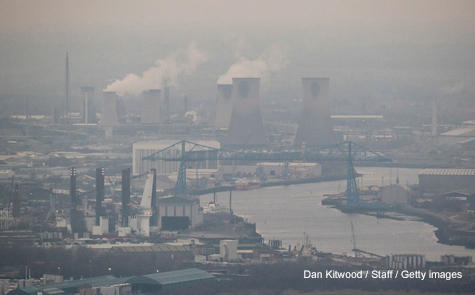 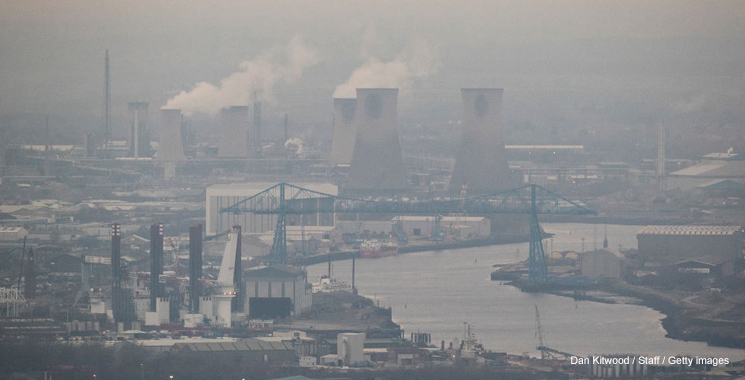 Legally, Brexit became a political reality on February 1, 2020. Yet, economically, Brexit is only set to happen only from January 1, 2021 as the transition period comes to an end with the possibility of an Australia-style no deal economic rupture still very likely.

Nevertheless, the last four years have left a significant mark on the UK economy, and new research shows that the costs of the Brexit vote to date are far from evenly distributed across the UK. Among the UK’s 382 districts, there are at least 168 districts that appear to be economic losers.

In our new paper, rather than looking at the UK as a whole (as had been done in previous work), we focus on how regions economically evolved before and after the EU referendum.

Previous work by John Springford at the CER and by Benjamin Born and his co-authors have used the synthetic control approach to study how the UK’s economy as a whole, as opposed to its constituent pieces, have evolved since 2016.

The synthetic control method is a way to construct what economists call a ‘counterfactual’; in the context of Brexit, this boils down to modelling how the UK economy would have evolved had it not been for the Brexit vote.

Using this method, both Born and colleagues as well as John Springford found that by 2018, the UK economy was around 2.5% smaller compared to its synthetic control.

We adopt a quite extensive and complex synthetic control approach to estimate counterfactuals for each of the UK’s 382 districts using annual data, and each of the UK’s 12 regions using quarterly data.

This allows us to construct a multitude of measures best seen through an interactive visualization of the regional economic cost of Brexit at various geographic resolutions which we share via an interactive map.

The economic costs of the Brexit vote identified by the previous studies are far from evenly distributed across the United Kingdom. Using quarterly data across the UK’s regions, we find that nearly all regions have lost economic activity vis-à-vis their respective synthetic controls. 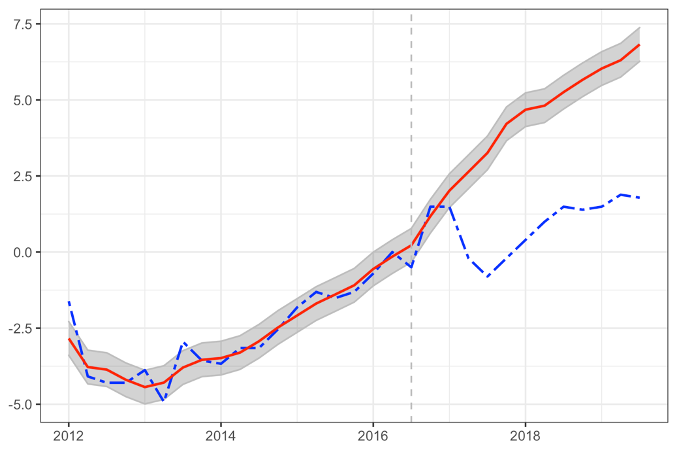 Among the 382 districts, at least 168 districts appear to be Brexit vote losers, having lost, on average 8.54 percentage points of output in 2018 (the most recent year at which district-level data is available) compared to their respective synthetic controls. 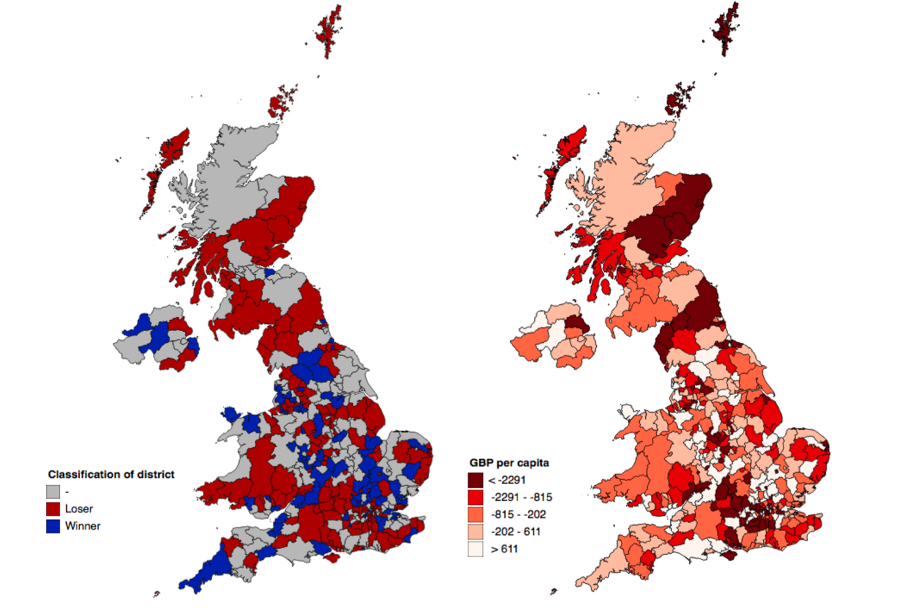 Studying what may be driving which regions are more prone to have lost output since 2016, we find some worrying patterns. Specifically, districts that had higher support for Brexit in 2016 have experienced a higher cost of Brexit up to 2018.

The costs of Brexit are also more concentrated in districts in which the resident population has relatively low educational attainment (a strong proxy measure capturing support for Leave as I show in earlier research, for example, here) and where the regional economy is more dependent on manufacturing.

Further, we also find some evidence suggesting that the parts of the UK that have already suffered due to Brexit may be also disproportionately be affected by Covid-19. Districts that suffered more due to Brexit up to 2018 also have much higher rates of employment furlough.

Since a non-negligible share of furloughed employees may never return to work, this could imply a fatal double whammy for some regional economies.

Importantly, the regional inequality in the costs of Brexit to date may imply that Brexit will make the ‘levelling up the UK’ even more difficult.

The fact that the UK’s GDP did not collapse on June 24 was seen by many Brexiteers as representing part of ‘project fear’.

A more nuanced reading of most economic impact analysis prior to Brexit however, rested on the assumption of Brexit producing a change in the legal terms of trade – such as reduced or limited market access to the EU’s single market.

More than four years after the EU referendum and the successful legal Brexit from 31 Jan 2020, economically, Brexit has not happened yet. From January 2021, the picture may change rapidly.

And how the UK’s economic relationship with Europe changes remains uncertain – with an Australia-style relationship that amounts to a no deal with the EU still likely.

Since 2016 the uncertainty over the future trading relationship has been effected firms’ economic decision making. This may help explain a puzzle: despite sluggish and slowing productivity growth, the UK saw record employment levels after 2016.

Firms may have been shying away from long term capital investments (which may come with some fixed costs and be only partially irreversible) and instead shifting towards labour (which can be more easily adjusted in case an unfavourable Brexit deal eventually becomes an economic reality).

Such substitution away from capital to labour may help explain the record levels of employment in the UK after 2016 – and we find evidence for this in our paper. Firms, by holding off on investing in capital, should become less productive as they may not use the efficient input mix anymore.

We found that labour productivity saw the sharpest drops in districts that saw the biggest drop in output vis-à-vis their synthetic controls, despite still recording employment gains.

This highlights that the employment growth after 2016 may be on a very shaky foundation, with significant employment adjustments likely once a hard Brexit becomes economic reality.

By Thiemo Fetzer, associate professor in the Economics department, University of Warwick and a visiting fellow at the London School of Economics.