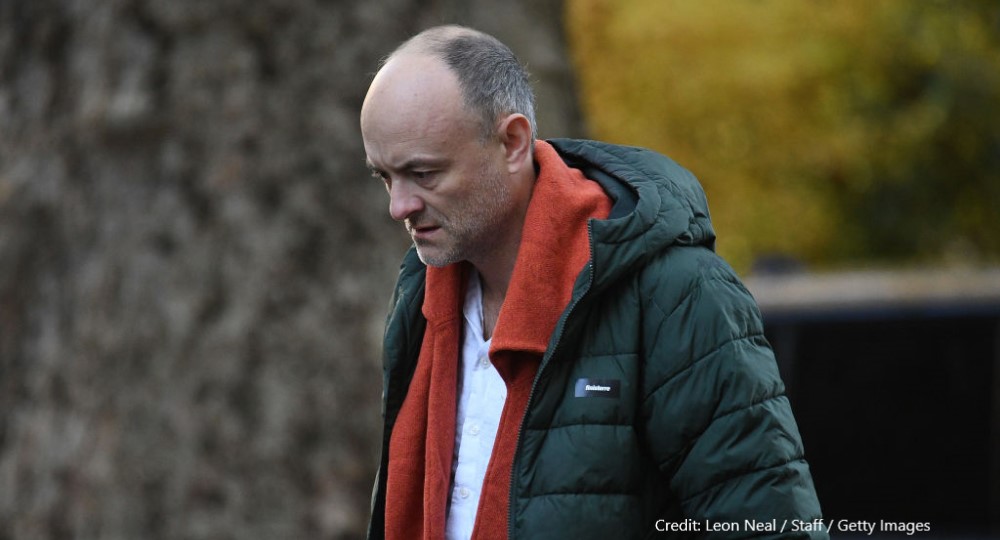 With hindsight, the manner of Dominic Cummings’ departure from No.10 was predictable. Intense public controversy has surrounded much of his career, including his tenure as the most senior special adviser to Boris Johnson after the latter became Prime Minister in mid-2019.

The term ‘divisive’ could have been created especially for Cummings. His approach to political campaigning – as demonstrated in the 2016 EU referendum and 2019 general election – was one of the identification, magnification and exploitation of social-cultural cleavages among the voting public (and his effectiveness in this regard is something for which he was never likely to be forgiven).

He also seemed to thrive upon the incitement of fissures within the parliamentary and wider Conservative Party (of which he was notoriously not a member); within the Government; and even inside No.10 itself.

Such behaviour inevitably created enemies, and their prolonged efforts to remove Cummings have now been rewarded. His political obituaries might encourage us to believe he was a unique figure. But if we assess Cummings from an historical perspective, it becomes apparent that – while exceptional in some ways – he can be located within certain ingrained patterns.

Accordingly, I will assess his career at No.10 from three points of view: the role that special advisers play in Whitehall; the nature of the teams that surround prime ministers; and the power of the premiership.

Special advisers as understood today initially came into use in 1964. They were introduced by the Labour Prime Minister who first took office this year, Harold Wilson, and were intended as a counterbalance to the permanent Civil Service.

By a tradition the origins of which lie at least as far back as the mid-nineteenth century, officials in Whitehall are employed on a permanent basis; they are not supposed to be overtly attached to particular politicians or parties.

They tend to remain in their posts irrespective of changes in ministerial office in their department, or in the party composition of the Government. Special advisers, by contrast, are temporary appointments who can come and go according to political circumstances. They are specifically attached to particular ministers, and are allowed (within limits) to represent the interests of the party of government of the day.

Sometimes they are appointed because they are in possession of specialist skills. In this respect, they are used to compensate for a perceived weakness on the part of the permanent Civil Service, which has been subject to criticism for its ‘generalist’ tendency and lack of expertise.

Special advisers, then, represent to some extent a challenge to Whitehall traditions. The official files from the 1960s onwards demonstrate the existence of internal concerns about what their presence implied and whether it would compromise accepted values.

Yet most of the time special advisers have established reasonable working relationships with permanent civil servants. They tend only to receive public attention when tensions arise.

Some of the problems associated with Cummings were of this nature, involving, for instance, speculation about his role in the ousting of a number senior civil servants. Yet though it had precedent, the scale of disruption was such that it was arguably qualitatively different.

The direct cause of Cummings’ departure was a dispute within the immediate circle around the Prime Minister. The groups that come to surround premiers are best regarded as courts, in which the political and personal overlaps.

Since proximity to the Prime Minister is a potential source of power, the environment at No.10 is often characterised by internal jostling for position. Indeed, premiers may deliberately cultivate such an atmosphere as part of their personal management technique.

David Lloyd George, Prime Minister in the coalition government first formed in 1916, seems intentionally to have constructed a group of aides who were often in competition with one another.

But there is a point at which such tension can become excessive. During his second, final, term of office, of 1974-1976, the group around Wilson – sometimes known as his ‘Kitchen Cabinet’ – suffered from personal divisions so severe as they seemed to compromise the effectiveness of his team.

The Johnson camp seems to have reached a similar or perhaps even more serious level of malfunction during 2020. The decision to eject Cummings is clear evidence of this fact. For an aide to be dramatically removed from the prime-ministerial court, as Cummings has been, is certainly unusual.

It is more common, once out of favour, to be side-lined or gradually eased towards the exit. More overt dismissals have, however, happened before – for instance in 2009, when Damian McBride, special adviser to Gordon Brown, was exposed as being involved in discussions about how to smear political rivals.

The Cummings episode is also illustrative of the nature of prime-ministerial power and its limitations. Any authority that such aides possess is derived solely from their personal attachment to the premier. If prime ministers are in a position of strength, those who work for them can wield considerable delegated authority.

For much of his time at No.10, for instance, Tony Blair was in a favourable political position and members of his staff such as Alastair Campbell, his communications chief, and Jonathan Powell, his Chief of Staff, were able by extension to speak with his authority across Whitehall.

But if prime ministers overplay their hands, or find themselves in a less clement climate, then interventions by them or those acting on their behalf are likely to meet with more resistance.

Following his general election victory of late 2019, the power of Johnson was at a peak, and he chose to vest much of it in Cummings, the adviser who had helped him achieve it. Over the course of 2020, the position deteriorated.

It did so partly as a consequence of some of the activities of Cummings and the negative publicity they generated. Increasingly, Cummings began to appear as the embodiment of a poorly performing leadership. Hostility within the Conservative Party, its parliamentary cohort, and the inner circle around Johnson built.

He had become a political liability; and perhaps some of his personal conduct undermined him further. Ultimately, Cummings lost the confidence of the Prime Minister and with it his link to power.

By Dr Andrew Blick, Head of Department of Political Economy and Reader in Politics and Contemporary History, King’s College London.