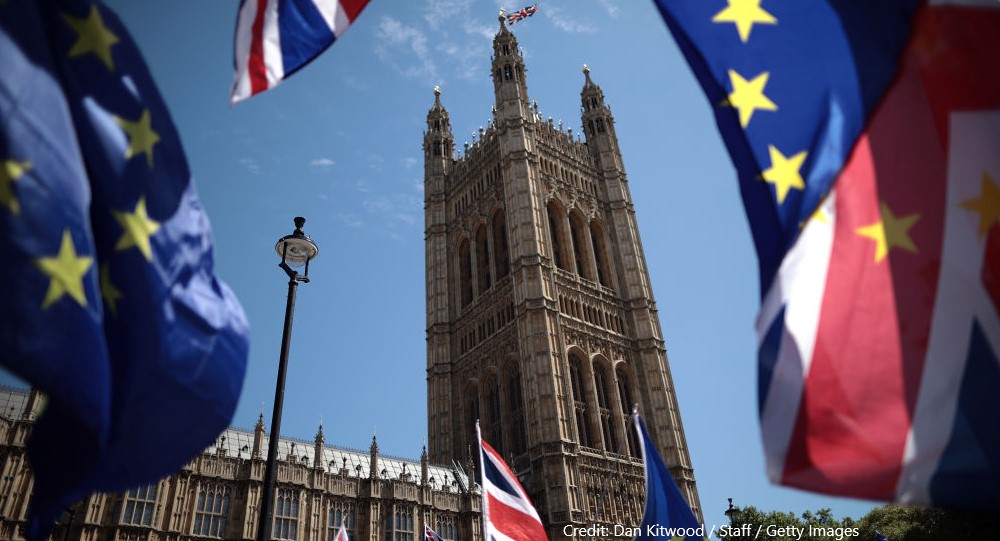 This blog summarises our new working paper reviewing the findings of academic research into how the Brexit vote affected the UK economy before the actual exit from the EU.

Although the UK voted for to leave the EU in June 2016, its economic relationship with the EU did not change until January 2021, when the Trade and Cooperation Agreement (TCA) came into effect. But Brexit still affected economic behaviour prior to 2021 because it changed expectations about future economic policy.

The Leave vote made it more likely that barriers to trade, investment and migration between the UK and EU would increase in the future. It also increased uncertainty over changes to UK and EU economic policy, creating a higher risk environment for decision makers.

How did this shift in expectations effect economic outcomes? Research shows that the Leave vote had a sizable negative effect on the economy even before the UK left the EU. Based on the available evidence, our judgment is that the UK’s economy was around two to three per cent smaller at the end of 2019 than it would have been if the UK had voted to stay in the EU. This decline equates to a loss of GDP of between £650 and £1,000 per person per year.

What evidence supports this judgment? The economic consequences of voting for Brexit first materialized in financial markets: on the night of the referendum, the pound experienced the biggest single-day fall in any of the world’s four major currencies since floating exchange rates were introduced in the early 1970s. And this decline proved to be persistent. Since the referendum, sterling has fluctuated around 10% below its pre-referendum value.

The fall in the value of the pound made UK households poorer by increasing the cost of imports, leading to higher inflation and lower real wage growth, as the figure below illustrates. The Brexit vote is estimated to have raised consumer prices by 2.9 per cent, increasing the cost of living for the average household by £870 per year. 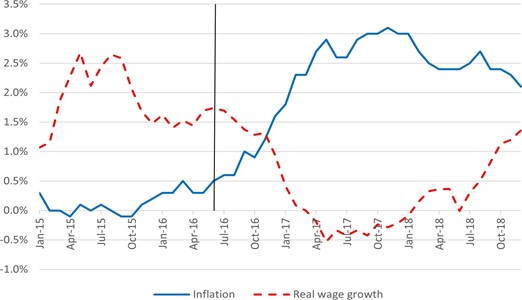 At the same time, data shows that the fall in sterling did not generate any long-run gain in the price competitiveness of UK exporters, which may explain why it did not lead to a rise in export volumes.

The UK’s GDP growth was not immediately affected by the referendum, but it did slow relative to other countries during 2017 and 2018, as the next figure shows. The UK dropped from having the highest growth rate in the G7 in 2015 to the lowest two years later. Determining what causes changes in aggregate growth is never easy, but both firm-level and aggregate evidence suggest that voting to leave the EU led to lower growth, with reductions in consumption and investment both playing a role.

For example, using data on firm-level exposure to Brexit-related uncertainty, researchers have found that the Leave vote reduced total investment by 11 per cent and value-added by between two and five per cent over the three years after the referendum. Firms facing higher Brexit uncertainty also reported spending more managerial time and financial resources on Brexit preparations. 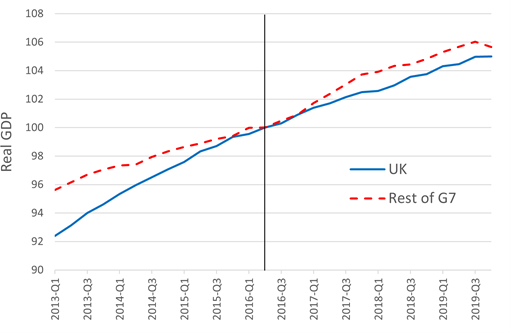 Taken together, the accumulated evidence on import prices, inflation, real wages, GDP and investment paints a rich picture of the channels through which the Brexit vote has hurt the UK economy. And, so far at least, there is no evidence to support the argument that Brexit has generated economic benefits sufficient to offset these costs.

Finally, how has Brexit effected UK trade? In the long run Brexit is expected to substantially reduce the EU’s share of UK trade. But despite evidence that firm and product level trade were affected by the threat of higher trade costs, the EU’s share of UK imports and exports remained roughly stable between 2016 and the onset of the Covid-19 pandemic, as the figure below shows.

The lack of aggregate trade diversion away from the EU prior to the introduction of the TCA is surprising and implies that many of the anticipated effects of Brexit on trade are yet to materialize. Consequently, it is too soon to draw any conclusions about the long-run economic impact of Brexit.

Indeed, data for 2021 shows that the TCA has already started to reduce UK-EU trade, particularly UK imports from the EU, showing that adjustment to Brexit is far from complete. We expect Brexit to provide fertile ground for economic research for years to come. 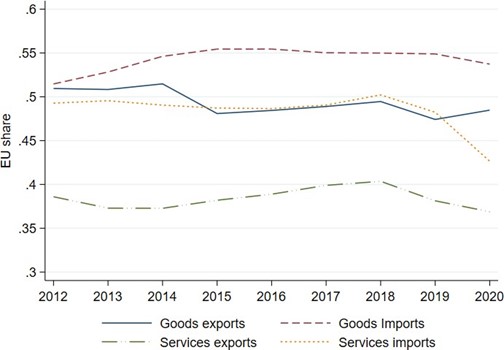