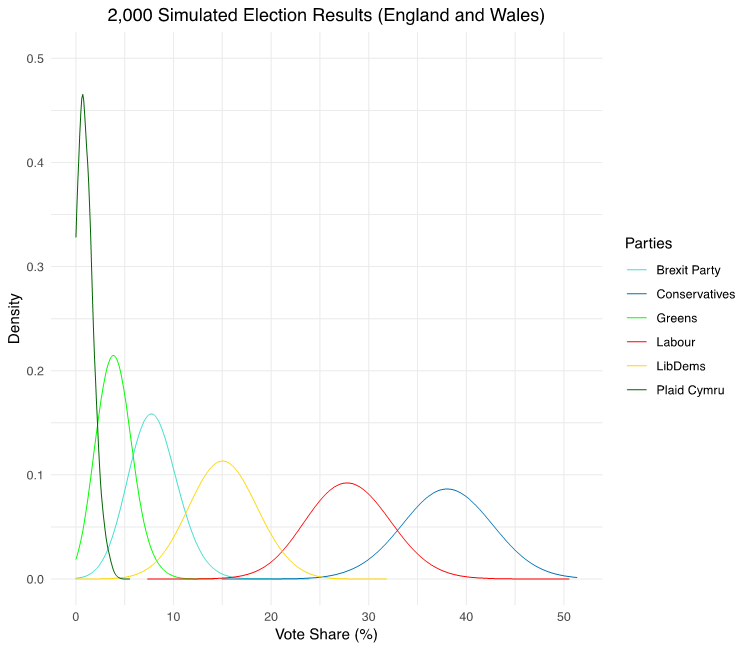 The first couple of weeks of the 2019 General Election – another ‘Brexit election’ – have been full of scheming about whether Leave or Remain alliances might emerge to help sew together the fragmented party politics of the last few years.

Since the European Elections in May, when neither major British political party was in the top two vote winners, the electoral landscape has fractured, far from the return of two-party politics we saw in 2017. Both the Brexit Party and the Liberal Democrats have typically polled in double digits, the Scottish National Party remain dominant in Scotland, and the Green party have so far resisted the ‘squeeze’ they may have feared from Labour and the Liberal Democrats.

This fragmentation doesn’t bode well for ‘getting Brexit done’ one way or another. And so, there has been considerable chatter about potential alliances among parties either side of the Brexit divide.

In the last week we have seen two such alliances emerge. One is a proper alliance – the ‘Unite to Remain’ grouping where the Liberal Democrats, Green Party and Plaid Cymru have opted to stand aside for whichever of those parties (predominantly the Liberal Democrats) stand the highest chance of winning. Another is a rather one-sided alliance – Nigel Farage standing down Brexit Party candidates in Conservative-held seats.

So far, these appear the only alliances in actual operation. The internet has been abuzz with chatter about other possible Leave and Remain alliances.

On the Leave side, many Leave commentators and Conservative supporters have argued that Farage would have helped the Leave cause more to stand down in marginal Labour held seats so as to avoid splitting the Leave vote. At the time of writing, Farage has resisted this request.

On the Remain side, the previous Liberal Democratic candidate and commentator for the New European, Tim Walker, stood down in the marginal Labour held seat of Canterbury, in order to avoid splitting the Remain vote. A debate ensued as to whether the Liberal Democrats should replace Walker, which they ultimately decided to do.

To see if any of these alliances would even matter for the distribution of seats in Westminster after the election – and in particular, whether they would buttress or undermine a Conservative majority – we developed a prediction model that takes current polling and tries to estimate what Westminster would look like under different types of alliances.

Long story short, we find that the current set of alliances – Farage standing the Brexit Party down in Conservative seats and the Unite to Remain alliance – have almost no effect on how Westminster might look post election and, in any case, cancel one another out.

But potential alliances – the Brexit Party giving way in Labour held seats, or a Liberal Democrat / Labour alliance would have game-changing effects.

To create our model, which focuses only on England and Wales, we took the current polling averages provided by Jack Bailey, a PhD researcher at the University of Manchester who has been updating these regularly.

We then simulate 2,000 possible polling distributions across parties in England and Wales to take account of polling uncertainty (so that, for example, if the Conservative average is 38%, ninety-five percent of our simulations are between 30% and 46% but are clustered around 38%). Below you can see what these polling distributions look like for parties standing in England and Wales.

We then feed these simulated polls into our own election-predictor model, which calculates for each constituency a predicted vote percentage for each party. We use a relatively simple setup here, assuming a uniform national swing for each party based on their current polling versus their 2017 polling and then applying that constituency by constituency.

For Scotland, things are a bit more complex: the party system there is entirely different, and even small polling discrepancies in the national share of the SNP – say, from 2% to 5%, well within the margin of error –  result in a great deal of seats changing hands there.

Thus, we used the most recent Scottish Westminster voting intention figures – which have the SNP ahead at 39%, followed by the Conservatives (21%), Labour (19%), the Liberal Democrats (13), the Brexit Party (5%) and the Greens (2%) – to create a separate model for Scottish constituencies.

The model adjusts UK-wide parties’ national polling to reflect their position in Scotland, based on their current polling and their performance in 2017, whilst holding the SNP fixed at 39%.

Finally, from these two setups we can calculate the winner of each of England, Wales and Scotlands’ 635 constituencies for each simulation. In other words, we run 2,000 General Elections – enough to make your heart stop (and, occasionally, your laptop).

For any scenario of alliances, we can also simulate Westminster. Each time we pull out the simulated distribution of seats in Westminster – for England and Wales – across the parties. We combine the seats of Labour, the Liberal Democrats, Plaid Cymru, the SNP and the Greens as a pro-Remain group and the Conservatives and the Brexit Party as a pro-Leave group.

And, in each scenario, we can also calculate the probability of either the Conservatives or the ‘Remain alliance’ having a functional majority (remember those?).

So what do we find? Let’s begin with the simplest scenario – one with no alliances. In the top graph, each dot represents the number of seats a party gets in each of the 2000 simulated general elections. 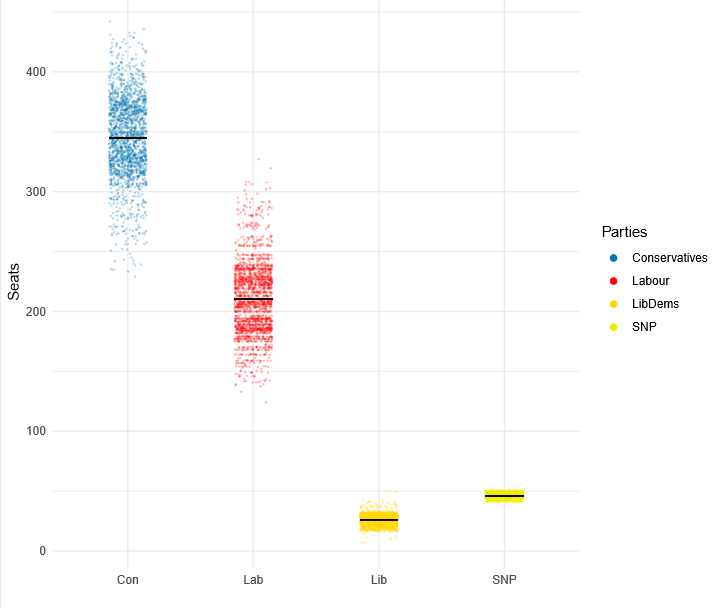 For the Conservatives and Labour, the distributions are quite spread out: most results are clustered around median values of, respectively, 345 and 208 seats. But there are freak outlier scenarios where Johnson may obtain as many as 442 seats and as few as 229, and similarly there’s a 1 in 2000 chance for Corbyn to win an outright majority with 327 seats and a similar probability to end up with the worst result for Labour since 1931, with just 124.

Conversely, the Liberal Democrats’ projected share is heavily clustered around a median of 27 seats: not a bad result, but no hopes of a big realignment in sight for Swinson.

In this graph we then plot the predicted seats for the Remain Alliance (the orange line) and the Conservative alliance (blue). We see here that 78% of the area under the blue curve crosses the dotted line, which represents the 320 seats that – once we exclude abstentionists and non-voting members of the House of Commons – represent the effective threshold for a majority. 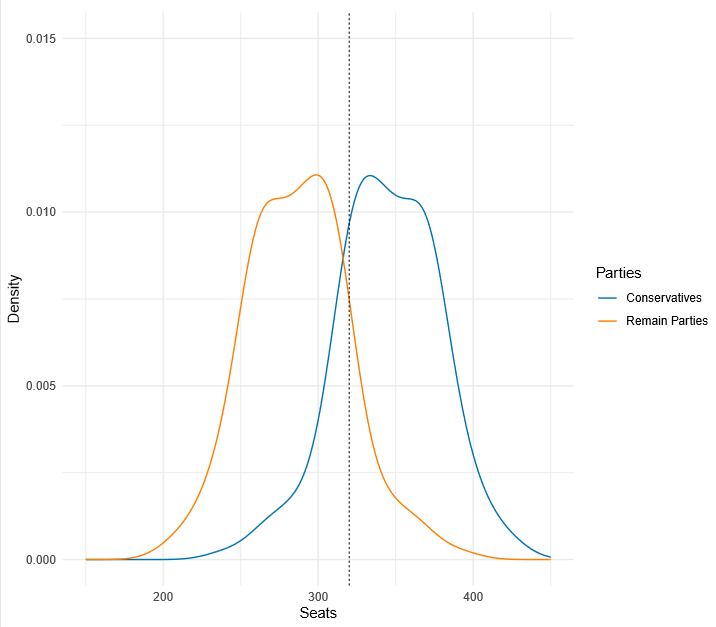 This means that, in this scenario, the Conservatives have a 78% probability of securing a majority, while for the ‘Remain alliance’ the probability is only 12% (in the rest of the cases, we have a hung parliament, with Northern Irish parties holding the balance of power). 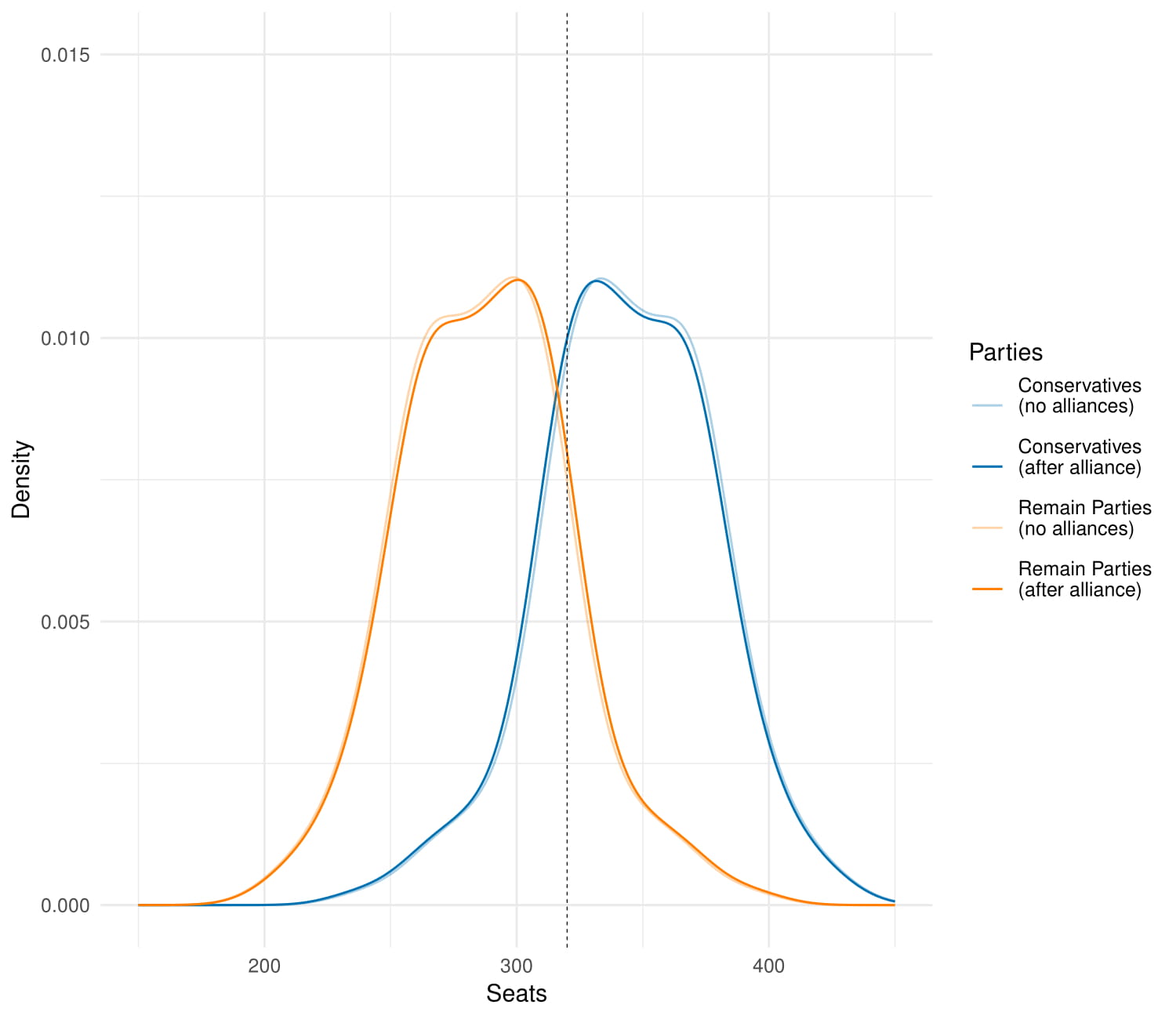 What about the Brexit ‘alliance’ where the Brexit Party stands down in Conservative held seats? Here we assume that half of Brexit Party voters abstain and 5 out of 6 of the rest will vote Tory, while 1 out of 6 will vote Labour. The Conservatives on average lose slightly fewer seats to the Liberal Democrats here. But it’s a matter of four seats on average, so not a great deal of change here either.

It’s interesting to note that the biggest difference between the light and dark blue curves is at the bottom of the distribution: that is, the Brexit Party is doing the Conservatives a favour if the Tories underperform (and hence more of their seats are at risk). In this sense, it’s more of an insurance policy than a trampoline for Johnson.

So, what we have today is pretty ineffective as far as alliances go. What about the alliances that haven’t, and may never, happen? Let’s begin with Farage standing down in Labour-held seats?

The ‘Reverse Farage’ strategy is pretty effective. The chance of a Conservative majority shoots up to 84% from the no alliance position, and – unsurprisingly – they mostly eat into Labour territory. 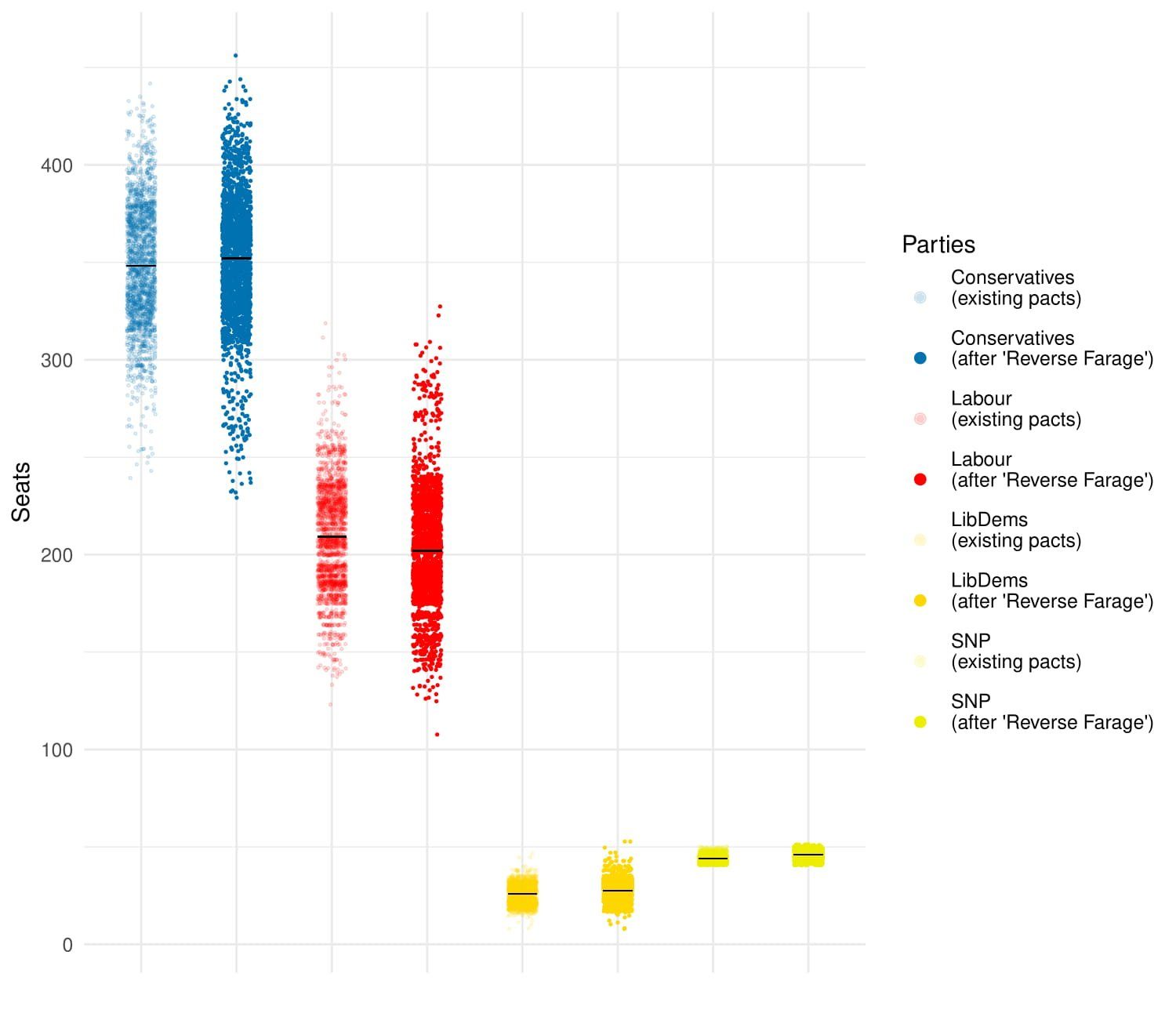 In this graph, we can then really see a shift in the distribution of seats without squinting (darker lines reflect this scenario, lighter ones, the no alliance scenario). 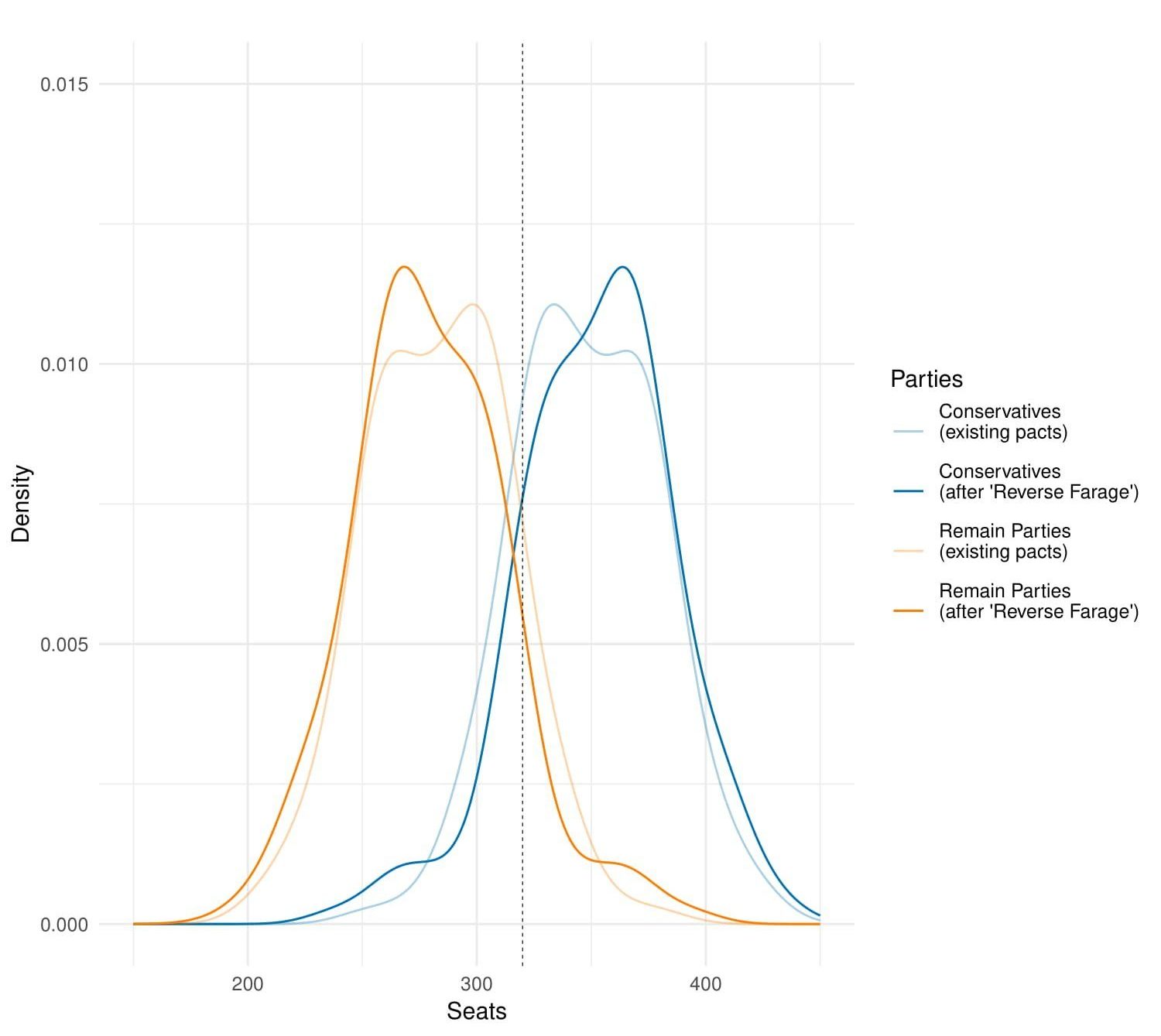 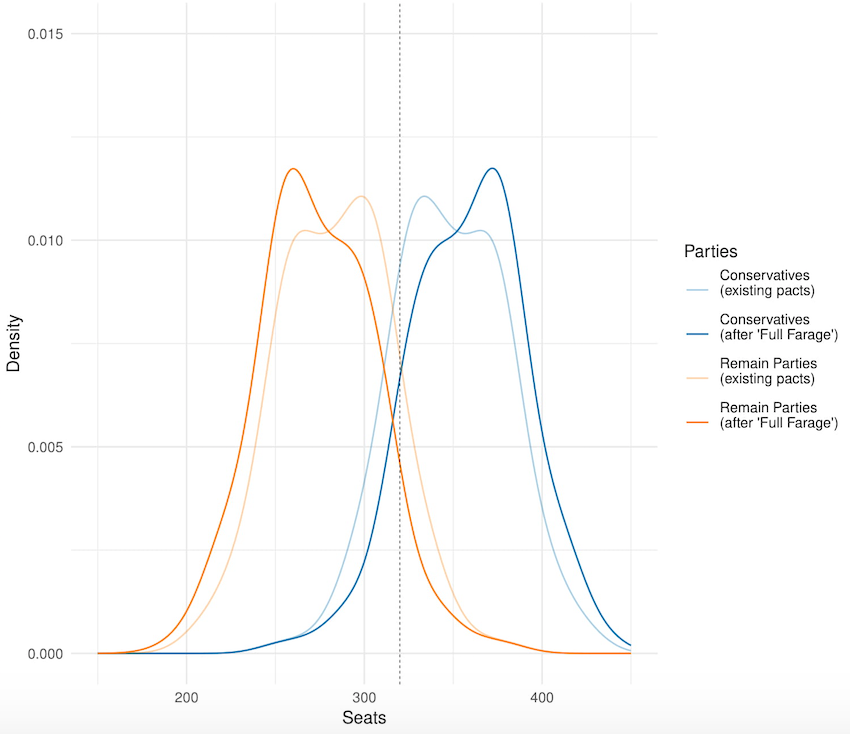 Is there no hope for the Remain Alliance then? Well, perhaps not if they are not actually allied. But if they were to have some type of informal alliance – a ‘Tim Walker’ pact where Lib Dems stand down in Labour seats and vice versa – then the Remain coalition’s chances improve dramatically.

Now, although the Conservatives are still the largest party, their chances of a majority plummet to 35% as they hover just above 300 seats. In this scenario, we can also show that the curves get much steeper, which makes sense as the Tim Walker pact is fundamentally a defensive alliance that secures the seats Remain parties already have, but doesn’t improve their chances of getting more of them. 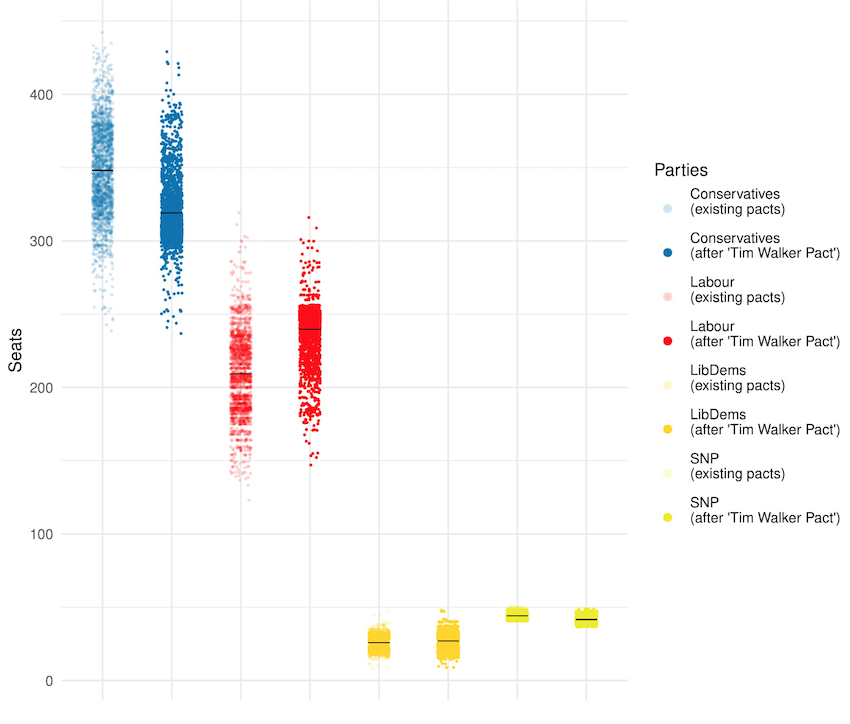 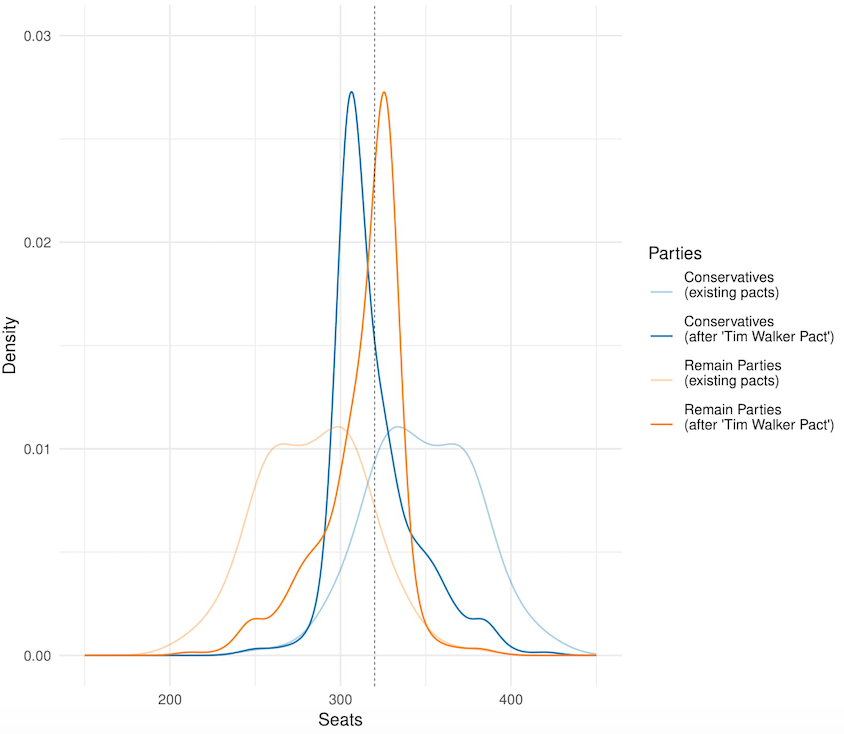 And, finally, a full-on alliance between Remain parties, where in England and Wales each would stand down for the frontrunner according to the Best for Britain tactical voting MRP model and in Scotland for the largest Remain party (BfB does not cover Scotland), would truly turn the election on its head: Remain parties would have a 74% probability of making it past the 320-seat threshold, while the Conservative probability is only 18%. 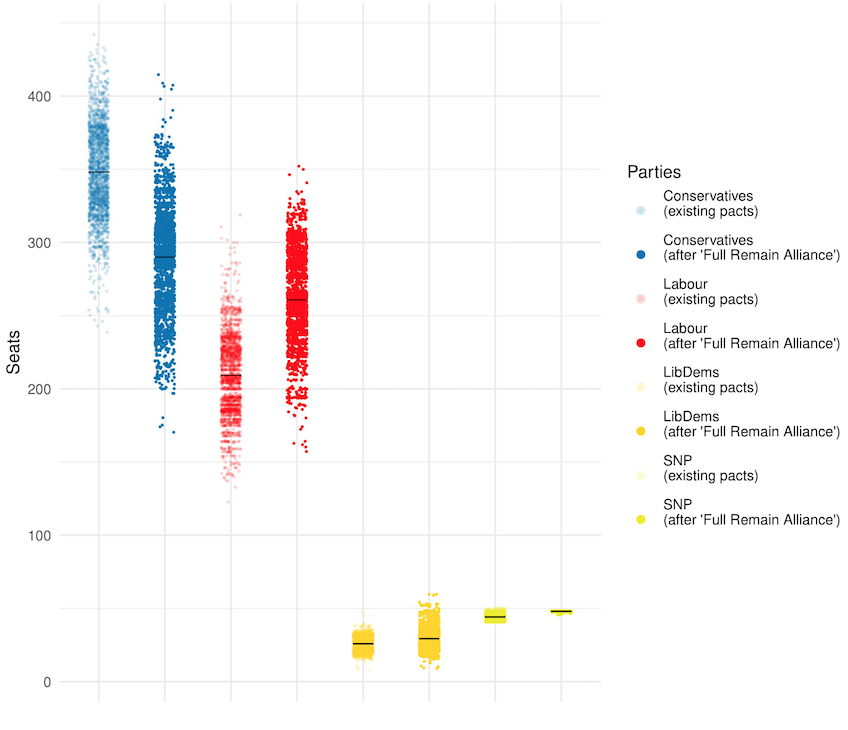 It’s worth noting that, while in this scenario all Remain parties gain a bit, the largest beneficiary would be Labour, which increases their average expected number of seats by 50, from 209 to 260, breathing down the neck of the Conservatives, who can expect to gain about 290.

So, alliances can work, just not the ones that have actually occurred. However, this is not an entirely academic exercise. It is indeed possible that it will be voters, rather than parties, who will make these pacts informally over the course of the campaign, and the relatively modest pacts that have been agreed so far can work as a spur for them to do so.

For instance, while for now we have been thinking about alliances in purely mechanical terms, it is possible that the very fact that Nigel Farage agreed to stand down some candidates (even though it’s not in the places where it actually matters) may be taken by prospective Brexit Party voters as a ‘signal’ to embrace the Conservatives elsewhere too.

In this case, the actual outcome may resemble more our ‘Full Farage’ scenario, even if ultimately the Brexit Party fields candidates in (the wrong) half of Britain’s constituencies.

On the other hand, it is also possible that the alliance backfires: as Remain voters start to perceive the Conservatives and Nigel Farage’s party as a unique Brexit-y entity, they may be put off and decide to vote tactically on referendum lines on a larger scale. In this case, we may have Remain voters behaving somewhat more similarly to our Full Remain Alliance and Tim Walker Pact alliances.

Finally, while the Unite to Remain Alliance has probably not changed many people’s minds about the Liberal Democrats, an alliance with Labour would do so. Jo Swinson has been adamant she does not support a coalition with Jeremy Corbyn. But a formal, maybe even informal, alliance in target seats may suggest otherwise to voters.

Swinson faces the risk that an association with Corbyn may put off the Conservative Remain voters she is seeking to win over. Labour too could risk losing Labour Leave voters if a Remain alliance with the pro-EU Liberal Democrats emerged.

So, alliances might be double-edged swords. They may not give that many seats to parties directly. And their indirect effect, by changing all voters’ minds about who the party is and what it stands for, might dominate any beneficial effect of an alliance. Britain has never had an electoral system that encourages cross-party cooperation. It’s not obvious that this is the election that will change those incentives.