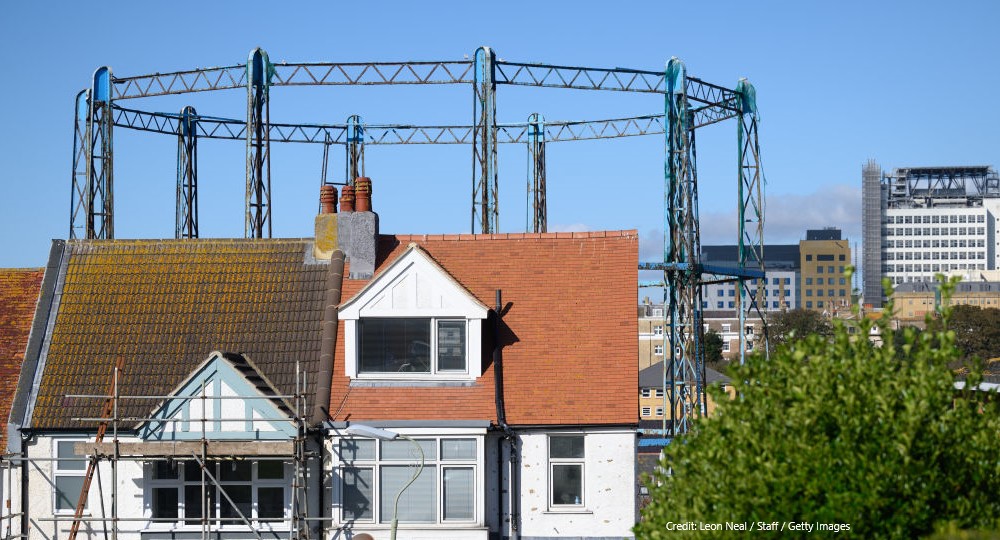 The recent surge in UK energy prices has dominated the headlines, and invited questions about the resilience of the UK’s energy supply.

This piece explains what has been driving the energy crisis and asks what effect – if any – Brexit has had upon it.

What has happened to UK energy prices?

The price of energy in the UK is surging. Market prices for gas have quadrupled in a year and electricity prices are up by a similar amount. The expectations are that prices could continue to increase through the autumn at least. 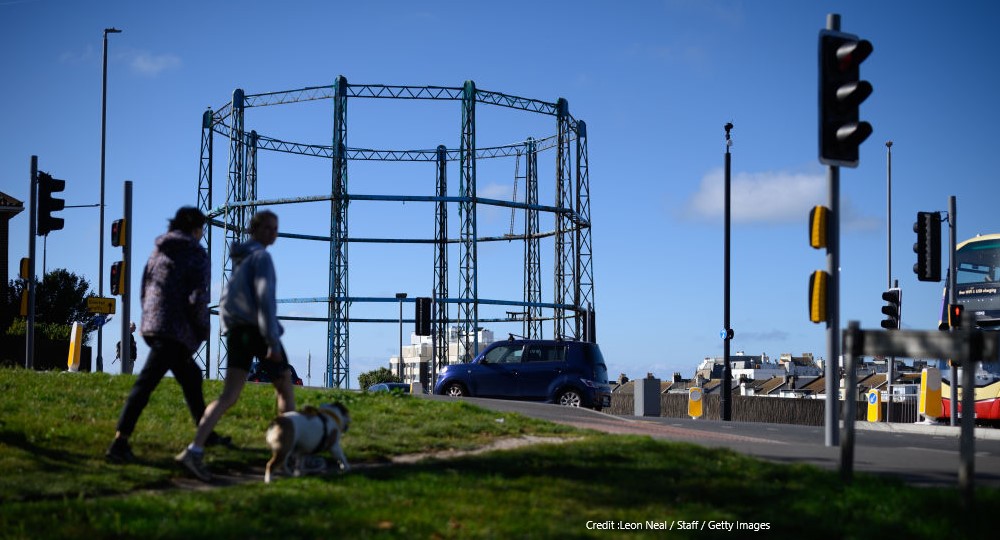 There are a number of factors driving this. At a macro level, the pandemic led to a global slowdown in demand followed by a surge as economies opened up again. In addition, Europe and Asia experienced very cold winters.

However, UK-specific factors also come into play. One is Britain’s very limited long-term gas storage capacity (in comparison to other European countries).

Another was a fire at an electricity interconnector between Britain and France, which supplies energy from the European continent to the UK – and the disruption was expected to last for a month.

“Market prices for gas have quadrupled in a year and electricity prices are up by a similar amount. The expectations are that prices could continue to increase through the autumn at least”.

Will the UK face energy shortages?

This is a global energy crisis reflecting surging demand for gas. There are some vulnerabilities in the makeup of UK energy supply which could be of concern over coming months.

In the past year 40% of UK energy supply came from gas, and, as mentioned above, the country has limited reserves, making it vulnerable to shortages if continued high demand leads to reduced availability. 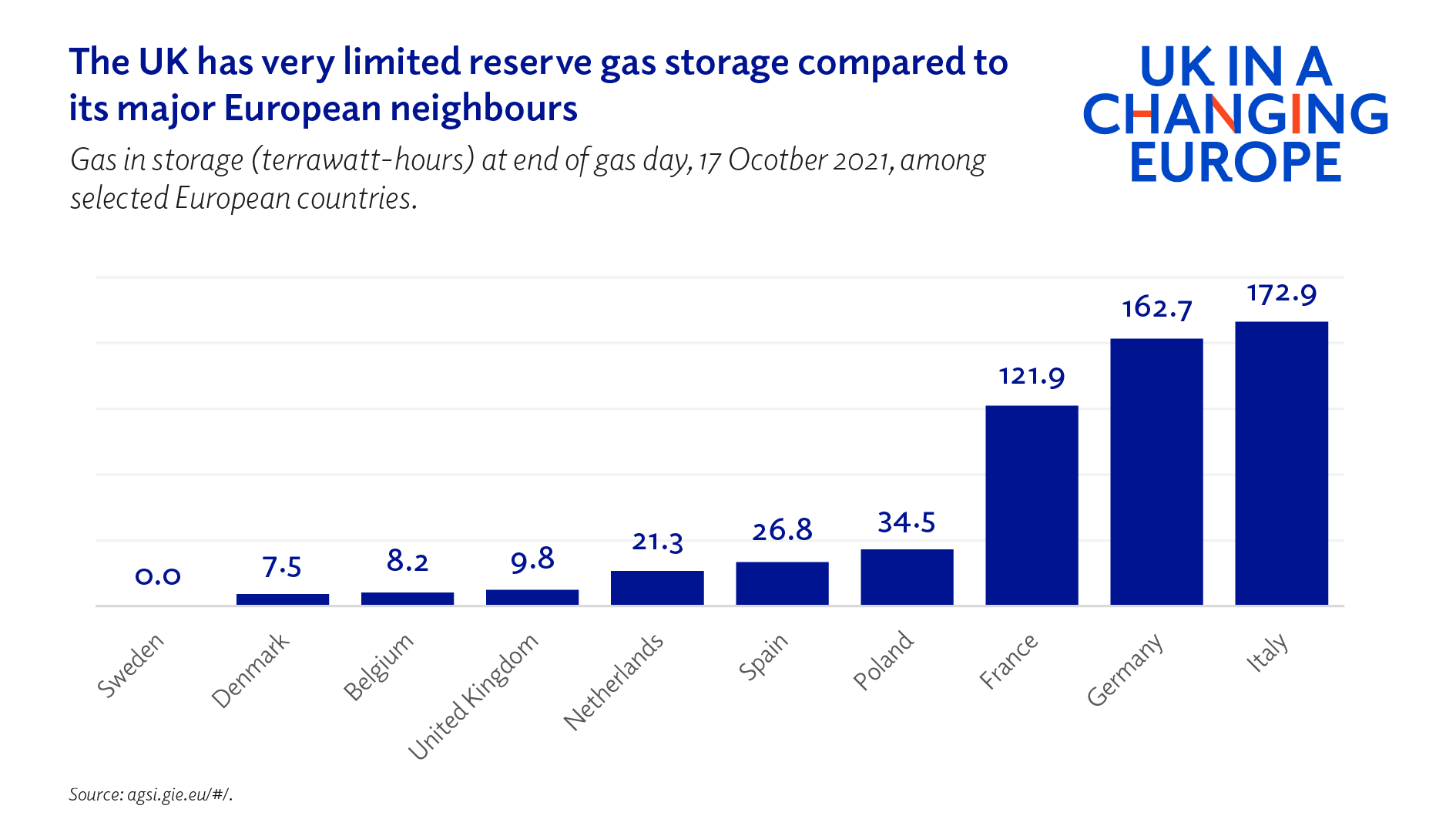 Second, Roy Manuell, an analyst at the market intelligence firm ICIS, points out that the UK sits ‘both physically and politically’ at the end of the pipeline from Russia: ‘Europe will take what they need and we’re right at the end of it.’

This makes the UK especially susceptible to fluctuating market prices. However the more likely consequence of this is volatile prices, rather than energy blackouts.

Why are energy suppliers collapsing?

Wholesale gas prices have risen sharply, meaning that some companies could not afford to supply gas to their consumers. These are largely companies that did not insure themselves against rising prices by hedging, i.e. locking in prices for the future.

Energy customers in the UK can choose between a ‘fixed’ and ‘variable’ tariff. The fixed tariff sets a defined price on energy consumption for a set period (e.g. 12 or 24 months), while the cost of energy on a variable tariff fluctuates according to market prices.

The recent surge in gas prices has meant that energy companies are supplying energy to their customers on fixed or capped tariffs at a price which in many cases is significantly below the market rate. In some cases this has pushed them to collapse. 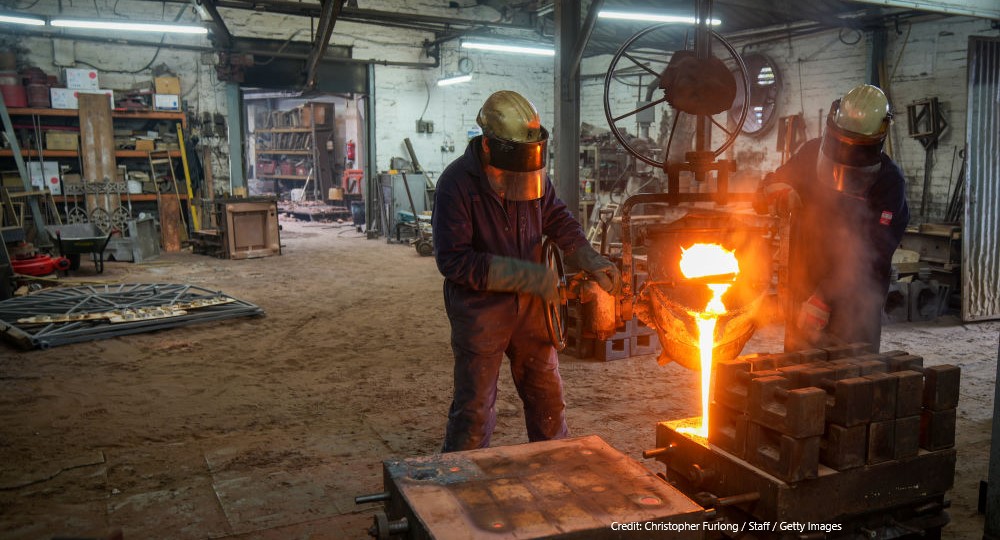 The government also puts a limit on what energy companies can charge their customers on most of the available variable tariffs, through something known as the energy price cap – which increased to £1,277 for typical usage at the start of October.

Fixed tariffs are normally cheaper than variable ones, but the current crisis has meant the fixed tariffs being offered by companies are significantly more expensive than what is permissible under the energy price cap.

In the space of two weeks in September, suppliers to 1.5 million energy customers collapsed, and more companies have collapsed since.

Is Brexit to blame?

Some commentary has put the surging prices down to the UK’s exit from the EU’s Internal Energy Market, which facilitates the sharing of gas and electricity supply between EU and EEA countries.

“The current crisis has meant the fixed tariffs being offered by companies are significantly more expensive than what is permissible under the energy price cap”.

There is however is no real evidence that this is a significant factor. European states are experiencing similar energy price increases.

What is the Internal Energy Market?

Even if the present energy crisis is not a Brexit issue, the place of Great Britain outside the single energy market might still cause problems in the future (Northern Ireland remains connected to the Internal Energy Market as it is part of a separate Single Electricity Market with the Republic of Ireland).

The Internal Energy Market, created in 1996, was intended to disrupt the monopolies in energy and gas markets in many EU and EEA countries by increasing competition and thus reducing prices for consumers. Over time legislation widened its scope: it now allows for the sharing of energy supplies between EU and EEA member states.

Electricity, for example, is redistributed across the EU and EEA using ‘interconnectors’, which deliver energy away from areas with surplus capacity to those that need it most.

This creates a more secure energy supply where member states are less reliant on their own reserves, and the more efficient distribution of energy reduces costs for consumers.

The distribution of energy supplies between members is governed by a coordinated price-setting system called Single Day Ahead Coupling (SDAC). The UK was a key architect of the plans for market ‘coupling’ when it was still a member of the Internal Energy Market.

The SDAC process works out daily energy prices across EU markets and how to most efficiently redistribute flows across interconnected energy markets.

Energy supply and interconnector capacity is then sold simultaneously (known as ‘implicit allocation’) according to a single standard for all market operators. This singular process makes for more efficient trading than having separate markets for supply and capacity, where the information available to traders will not be as aligned.

In 2017 the ‘cost efficiencies’ derived from this process were estimated to be worth £100m a year to the UK. That is equivalent to under half a percent of the total cost of UK household energy bills at the time.

What has been the effect of leaving the Internal Energy Market so far?

Great Britain still has electricity interconnectors with France, Netherlands, Belgium and Ireland. There are also plans for a second interconnector with France as well as with Norway and Denmark.

However, Britain is no longer covered by the SDAC and its ‘implicit allocation’ scheme which redistributes energy supply to the parts of the Internal Energy Market where need is greatest.

Instead, traders must now buy interconnector capacity and power each day in two separate transactions via something called ‘explicit auctions’ – before daily prices are set – and businesses must re-register with the EU, which may make the whole process less attractive due to increased bureaucracy.

The result is that the flow of electricity through interconnectors is much less efficient than when governed by the SDAC, meaning a loss of cost efficiencies. 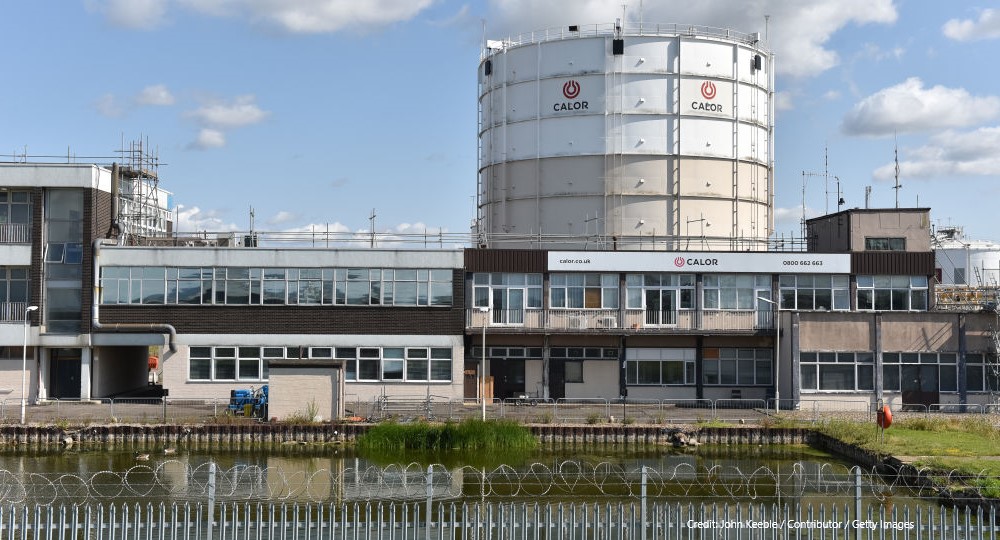 Northern Ireland is part of a separate Single Electricity Market with the Republic of Ireland. Established in 2007, it is a single market for the trading of electricity between power generators and suppliers of electricity across whole of the island of Ireland. It is also integrated into the EU’s Internal Energy Market.

Northern Ireland is far less reliant on gas, as only 20% of its households have a gas supply, compared to 85% in Great Britain. However, energy suppliers who do use gas are putting their bills up at rates comparable to the rest of the UK.

The UK is reliant on the EU and EEA for a key portion of its gas supplies but the impacts of Brexit upon this are not entirely clear.

Roughly half of the UK’s gas comes from its own continental shelf, with the remainder from pipelines with Norway (which accounts for a third of UK gas supply on its own) and continental Europe, and imports of liquified natural gas (with Qatar, the USA and Russia some of the biggest exporters at present).

However, unlike with electricity interconnection, the UK’s departure from the Internal Market does not fundamentally alter how it accesses gas from EU and EEA markets.

“The UK is reliant on the EU and EEA for a key portion of its gas supplies but the impacts of Brexit upon this are not entirely clear”.

Any impacts of Brexit on gas supply will be more diffuse. The UK Energy Research Centre points out that it has become more difficult to attract gas to UK markets now that the UK’s domestic gas price has lost its status as the European benchmark.

Traders prefer to sell in using the Dutch gas price, which undermines the status of UK gas price and makes the market less attractive. Added to this, the UK no longer benefits from the EU’s ‘solidarity mechanism’ which implies EU members support each other during a supply crisis.

These factors suggest that while continued EU membership would not have avoided a surge in gas prices, it might have been somewhat smaller and future supply could have been more secure. 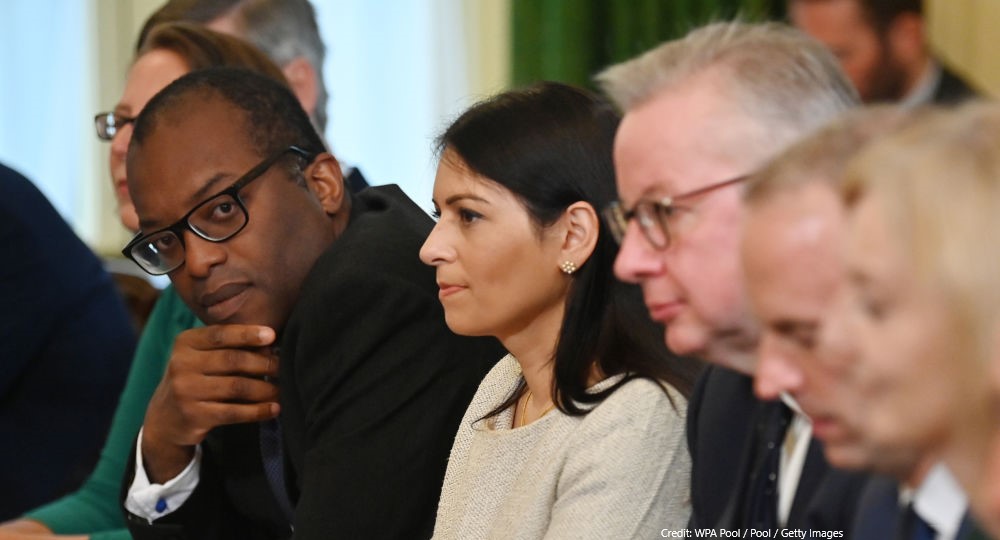 Can France cut off UK access to the energy market in retaliation for moves on fishing or Northern Ireland?

France’s Europe Minister Clément Beaune has threatened to cut off exports of French electricity to Britain and the Channel Islands, in response to UK threats to jettison the Northern Ireland Protocol and refusal to grant the majority of applications for fishing licenses from smaller French vessels.

The UK-EU Trade and Cooperation Agreement says if either side fails to comply with the fisheries element of the agreement, the other party may in some cases respond by wholly or partially suspending its obligations in other parts of the agreement, including the section on energy.

This means the EU could cut off the energy supply from France to the UK in response to perceived failures of responsibility over fish, but it would require collective EU approval and could not be a result of unilateral action by France.