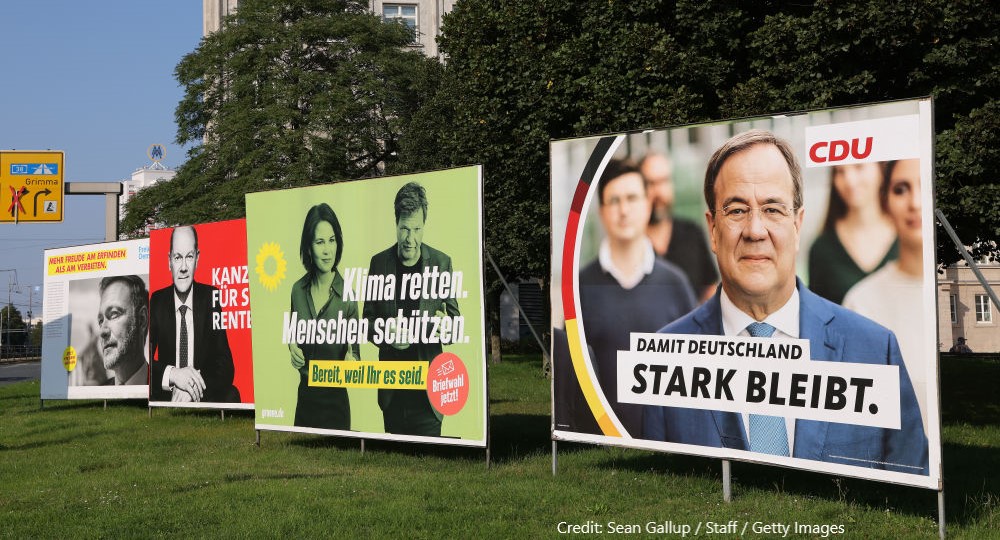 The German federal election takes place on Sunday 26 September and will decide the make-up of the new German government, as well as who replaces Angela Merkel as Chancellor after sixteen years in power.

We explain how the election works, who the main candidates are, and what to expect ahead of the vote on Sunday. 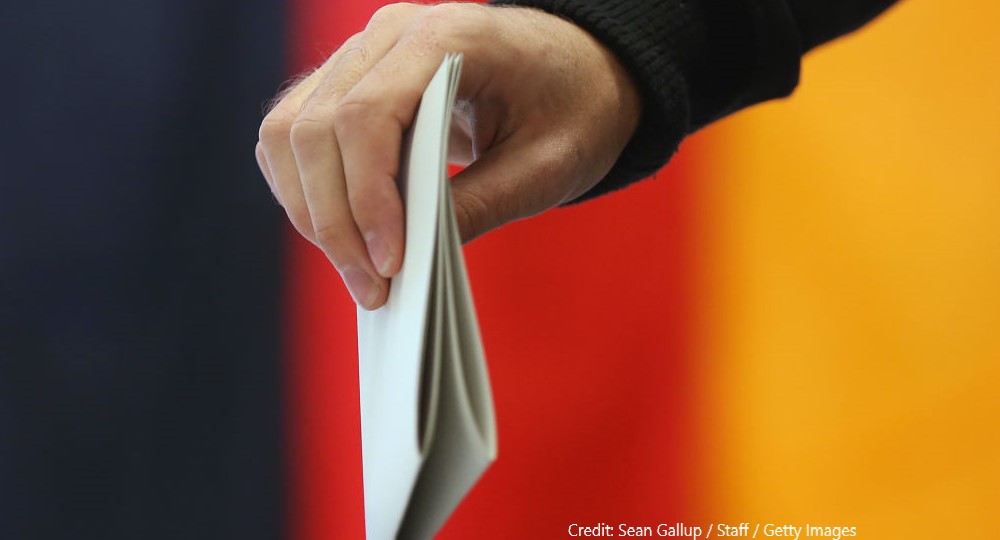 How do the elections work?

All 598 seats of the German parliament (the Bundestag) are up for election. Each voter gets to cast two votes: one for a constituency candidate, and one for a party list.

To determine constituency candidates, Germany is divided into 299 constituencies of roughly 250,000 inhabitants, and each one returns one representative. This is determined by whichever candidate wins the most votes within the constituency.

The other 299 seats are then determined by the share of the party list votes. In each state, if a party’s share of the list vote is higher than the share of constituency seats it has won, it is allocated additional seats to rectify this.

Only parties which win 5% of the overall list vote (with exceptions for parties representing minorities or which have won three constituencies) are eligible for seats via the list system.

In some regions a party may win more constituency seats than its share of the party list vote. In such cases the other parties receive further ‘overhang’ seats to compensate for this.

This means that the final Bundestag typically has more than 598 members – in the last federal elections in 2017 there were an additional 111 overhang seats and thus 709 members overall. 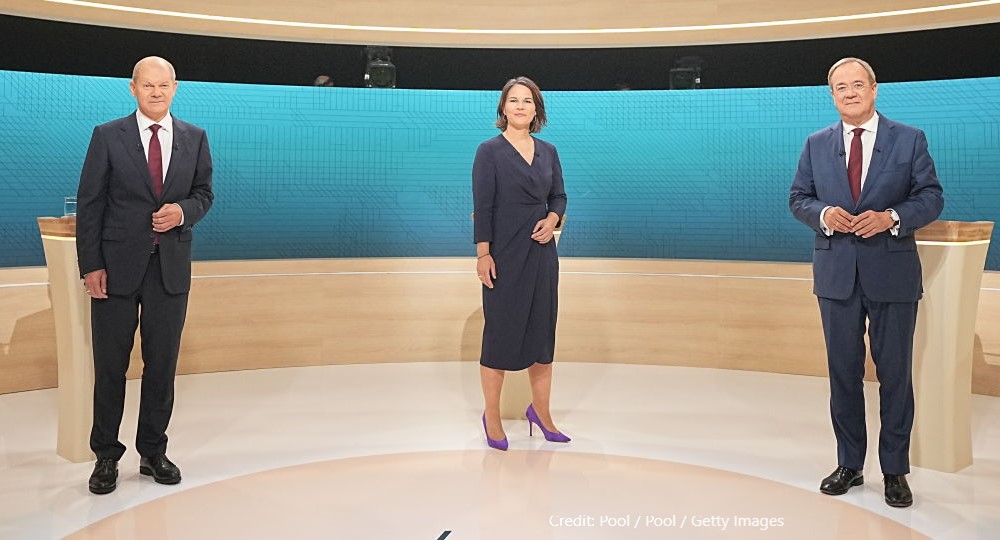 Who are the candidates for Chancellor?

In the run-up to every election, those parties who think they may end up with the potential to lead a coalition designate their Chancellor candidate – who is not necessarily the party leader.

Angela Merkel is not standing for re-election, so there will be a new Chancellor.

Laschet, who has been Minister-President of the state of Nord-Rhine Westphalia since 2017, has attempted to style himself as a moderate and the natural heir to Merkel. They are from the same Christian Democratic Union (CDU) party and he has her formal backing.

He advocates a return to pre-pandemic EU fiscal rules, with less state intervention and a reduced use of debt to finance government spending, and shares Merkel’s emphasis on maintaining trade links with China and Russia.

He was selected ahead of the more maverick, popular Markus Söder – leader of the CDU’s sister party the Christian Social Union (CSU) – to become the CDU/CSU candidate.

Scholz, who is Deputy Chancellor and Finance Minister in the current ‘grand coalition’ between the CDU/CSU and SPD, has also sought to present himself as an experienced and sober politician in Merkel’s mould. Key policies include no tax cuts for the rich, a raise in the minimum wage, more social housing and a carbon neutral economy.

Baerbock is the first Green to be nominated for Chancellor, reflecting their strength in the polls in recent years.

Baerbock advocates a tougher line on China and Russia, including greater use of sanctions and import duties, and reform of EU fiscal rules to allow looser limits on budget deficits and debt levels in EU member states.

Who is on course to win?

The SPD overtook the CDU/CSU in the opinion polls in late August and has consistently held a 3-4 point lead ever since, making Scholz the favourite for the Chancellery. The CDU/CSU are on 21-22%, with the Greens presently polling around 16%. 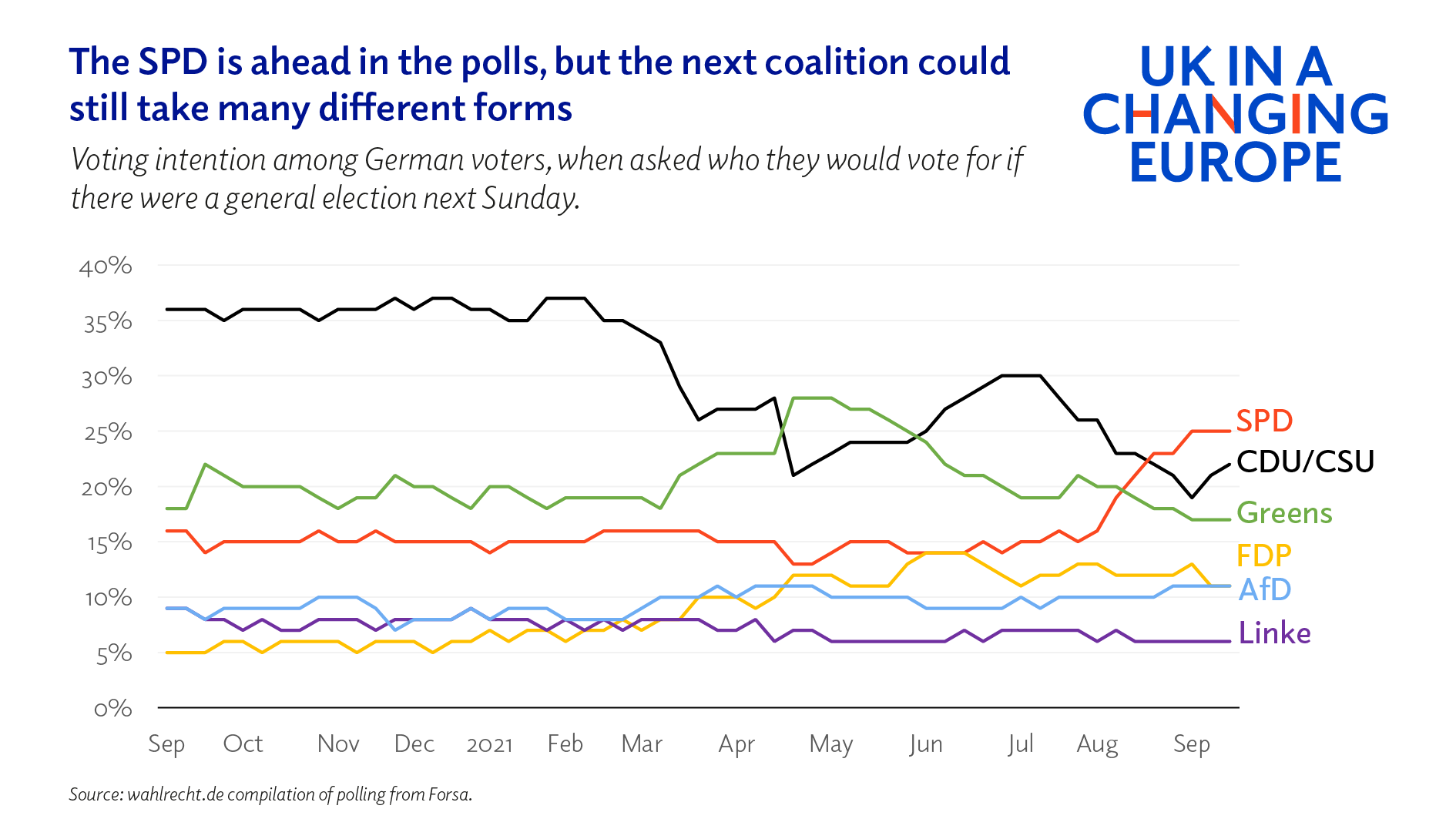 The CDU/CSU long held a 15+ point lead in the polls but this started to narrow, in particular after the CDU/CSU and Greens announced their Chancellor candidates in April, and since summer flooding in Germany, when Laschet was caught on camera laughing as the German President Frank-Walter Steinmeier spoke at the scene of one of the disasters.

It was only around this time – as the campaign proper swung into gear – that the SPD’s ratings picked up.

The final result is, however, far from certain as a significant number of German voters remain undecided. Eight out of ten think Merkel is doing a good job and none of the candidates to replace her enjoy the same level of popularity.

Scholz is, however, deemed suitable for the job by 60% of Germans, whereas under 30% think the same for Laschet, and just over 20% for Baerbock.

Will there be another coalition?

So the election will usher in negotiations for a new coalition government. These could take weeks or months while the parties negotiate a detailed programme for government and allocation of posts.

Merkel has led the past four coalition governments: three times with the CDU’s sister party the CSU (with whom it runs on a joint platform) and the SPD, and once with the CSU and liberal Free Democratic Party (FDP). Prior to that there were two Red-Green coalitions led by the SPD’s Gerhard Schröder.

What are the possible combinations?

The most likely coalition for a Scholz-led government is the ‘traffic light’ made up of the SPD (red), Greens, and liberal FDP (yellow). Another possibility is a red-red-green coalition between the SPD, left-wing Die Linke, and the Greens.

Die Linke have been polling at 6-7% and their possible presence in an SPD-led coalition has been a key attack line of the CDU/CSU in recent weeks.

Another ‘grand coalition’ between the SPD and CDU/CSU also remains possible, although on current polls Scholz has more chance than Laschet of being Chancellor in such a coalition.

When will we know the result?

The election takes place on Sunday 26 September but the coalition-building process can take some time. The last federal election took place in September 2017 but the new government was not formed until March 2018 after protracted coalition talks. 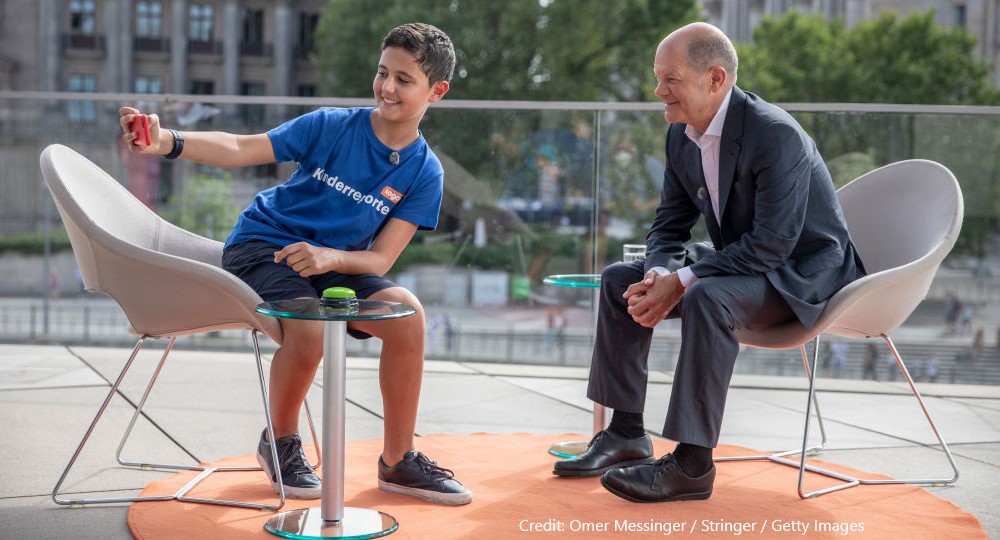 Who runs Germany while the talks go on?

During the lengthy 2017-2018 negotiations Merkel and her cabinet continued to serve as a caretaker government. That also meant, for example, that Merkel continued to represent Germany at events such as European Council meetings.

If coalition talks prove similarly difficult this time around, Merkel could well be in office for some months yet.

By Joël Reland, Public and Foreign Policy researcher at the UK in a Changing Europe.