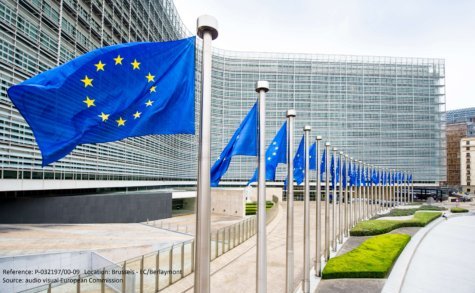 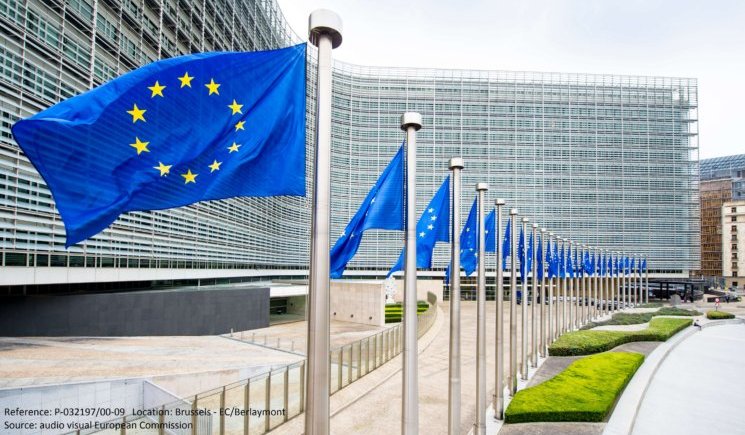 Accession is the process by which new countries join the EU. Member states recently reached agreement on opening accession negotiations with North Macedonia and Albania. The last member state to join the EU was Croatia in 2013.

Why has the EU expanded?

Historically, the EU has been a stabilising force in Europe, supporting the likes of Greece, Spain and Portugal to transition from dictatorship to democracy, and offering encouragement to the former Soviet-occupied countries of eastern Europe to do the same. The EU has expanded primarily because countries on its periphery—most of which are relatively small—have felt their interests were better served in the bloc.

Especially for relatively poor countries, EU membership has also provided the impetus to modernise their economies, gaining access to a large market but also being subject to substantial competition. Prospective members hope to access payments from the EU budget to support their development, albeit that such funds often account only for a small amount relative to the size of their economies.

EU member states see enlargement as supporting the EU’s political, economic and security interests. Given the demands of the accession process, it is seen to encourage stability in the EU’s neighbouring countries by promoting a transition to liberal democracy and supporting economic development, ensuring greater security in wider Europe. Enlargement also expands the EU’s size, giving it greater political and economic weight globally, as well as a larger internal market.

The EU’s enlargement energies are now focused almost entirely on the western Balkans, where it is hoped EU membership will serve as an incentive to stabilise the region.

What are the criteria for accession?

Accession to the EU is done under the terms set out in Article 49 of the EU treaties.

Countries wishing to apply must respect and promote the EU’s fundamental values, which are set out in Article 2. These include respect for democracy, rule of law and human rights, as well as the protection of minorities. There is no formal test of these commitments prior to application. The Commission assesses suitability under these terms once an application is received.

More specific criteria were established at the European Council meeting in Copenhagen in 1993. The Copenhagen criteria state that countries must have stable, functioning democratic institutions, which can ensure the protection of the EU’s fundamental values.

They must also have functioning market economies, with the ability to withstand competition in the single market. Finally, they must be able to implement the EU rulebook effectively and be able to take on the administrative demands of membership.

What is the process for accession?

Article 49 of the EU treaties also sets out the internal EU procedure for a new member to join. The Commission negotiates on behalf of the EU and the member states and the European Parliament must then approve. National parliaments also have to give the green light before new members can join.

There are four basic steps: application, candidate status, negotiations and, finally, accession. To move to any of the subsequent stages in the process requires Commission and unanimous Council approval, as well as sign-off from EU leaders, with the European Parliament and national parliaments also having to approve the final accession treaty.

Any European country that considers it complies with the accession criteria may apply to be an EU member. The Commission is then asked by the EU General Affairs Council (GAC) to assess whether or not they meet the criteria.

If they don’t, steps are recommended that need to be taken to do so. If a country does meet the criteria, the Commission recommends to the GAC granting official candidate status. If the GAC approves unanimously, and the European Council subsequently endorses this conclusion, then the country officially becomes a candidate for EU membership. The Commission recommendation will usually set out further steps a country needs to take and formal negotiations may be delayed until such steps have been taken.

Following candidate status, the Commission then draws up a negotiating framework, or mandate, for the EU side and the candidate country does the same. Negotiations cannot begin until the mandate is unanimously agreed by EU member states.

In total, there are 35 chapters of EU law that need to be negotiated. Recent changes to the process (see below) mean chapters are clustered into six groups. Negotiations begin with the opening of the chapters on so-called ‘fundamentals’, issues like the judiciary and fundamental rights, and this chapter is also the last to be signed off. Five other groups of chapters need to be negotiated, each requiring separate unanimous approval by the member states.

Once negotiations are complete, the Commission recommends candidate countries for membership. The accession treaty—which translates the agreements reached into treaty form—must be approved by a majority in the European Parliament and unanimously in the Council. The Council hurdle is higher for accession than for exiting countries, where only a qualified majority is required. The accession treaty must also be approved by national parliaments of each EU member state.

How has the process changed recently?

In March 2020, the Council endorsed Commission proposals for a number of modifications to the accession process.

These are aimed at making more robust demands of candidate countries in terms of ‘fundamentals’ such as the rule of law and the functioning of democratic institutions. But they also establish a more structured negotiating process, increase member state involvement in accession talks, and intensify the number and range of political contacts between the EU and candidate countries.

The most substantial reforms are procedural. The 35 negotiating chapters necessary for accession to the EU have been reorganised into six thematic groups, including fundamentals and internal market.

Rather than taking each chapter individually, as before, thematic groups of several chapters are now taken at a time. The group on fundamentals is opened first and closed last, stressing the importance the EU places on things like the rule of law and stable democratic institutions. There is an aim to complete negotiations on each group of chapters within a year, implying an indicative six-year timeframe for negotiations to be completed.

The aim is to prevent the accession process stagnating, providing candidate countries with a clear set of criteria to meet in order to make progress, as well as clear sanctions if they stall or backslide. Countries already in accession negotiations with the EU prior to these reforms will be able to opt in to the new process if they wish.

How long does accession take?

Throughout the history of the EU, accession has taken different lengths of time for each country. The quickest to negotiate accession were Austria, Finland and Sweden, in just under two years, whereas it took Croatia just under eight years from the start of negotiations to becoming a member state. 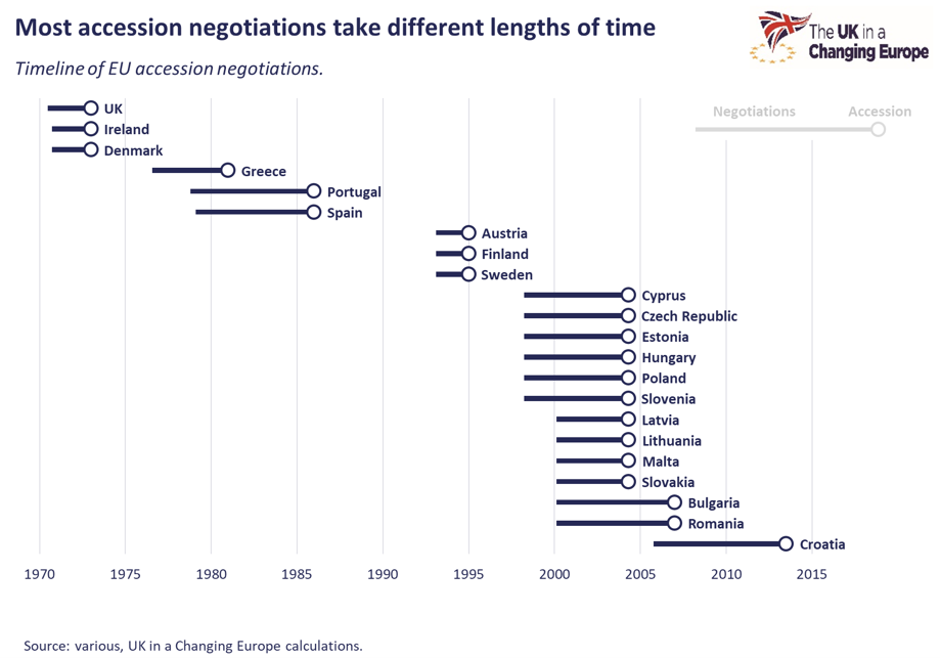 On average, it takes just under five years from the opening of accession negotiations, but the timeframe depends on the ability of the candidate country to achieve the necessary domestic reforms, as well as the level of political will on all sides to see the process through. 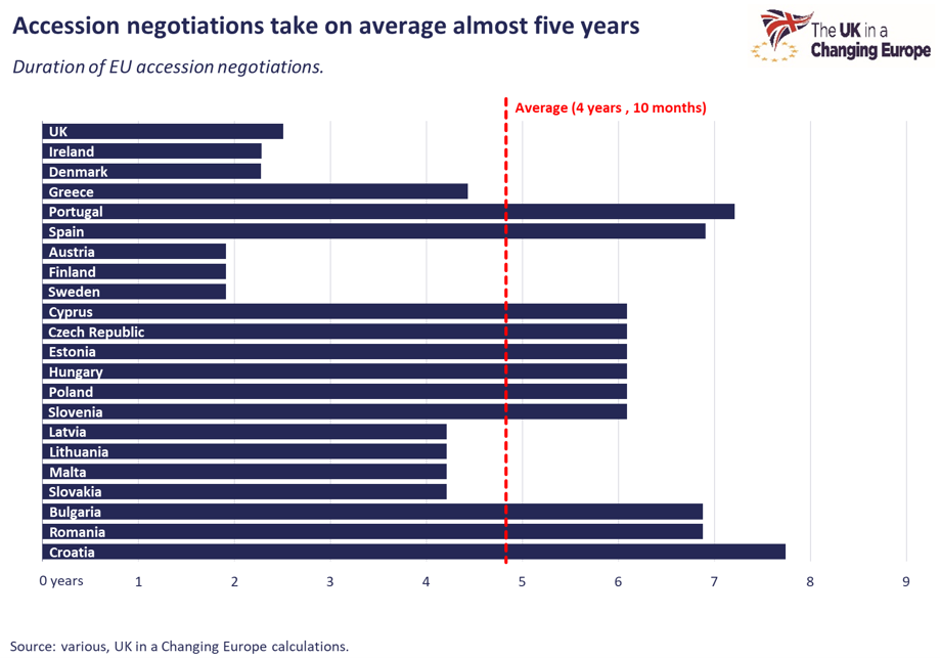 Which countries want to join the EU?

There are six countries officially in the process of trying to join the EU: Bosnia & Herzegovina, Albania, North Macedonia, Montenegro, Serbia and Turkey. None is likely to join in the short term and in some cases talks have all but stopped (see table below). 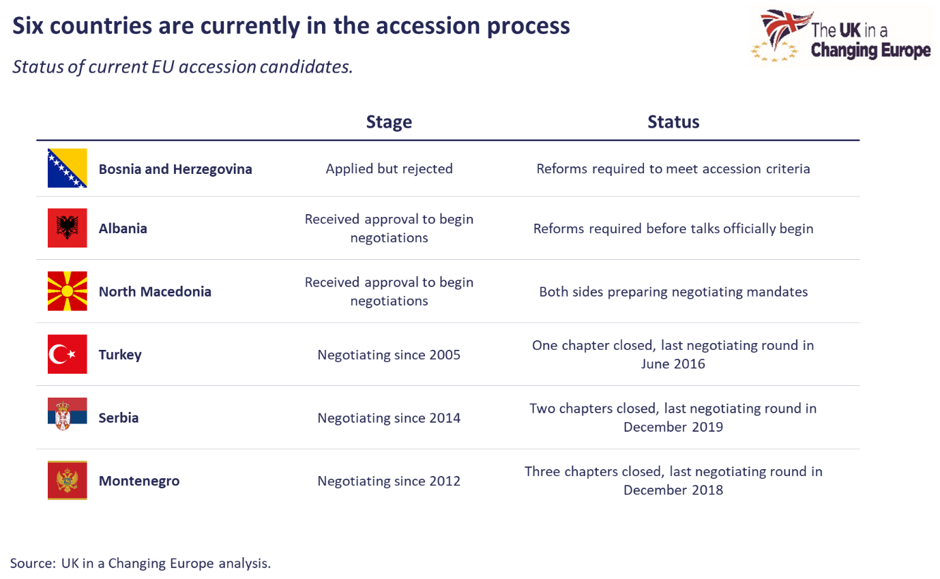 The most credible recent candidate for EU membership was Iceland, which applied for membership in 2009. Substantial progress had been made, with 11 chapters closed by May 2013. However, the Icelandic government placed the talks on hold and the country formally withdrew its application in March 2015. 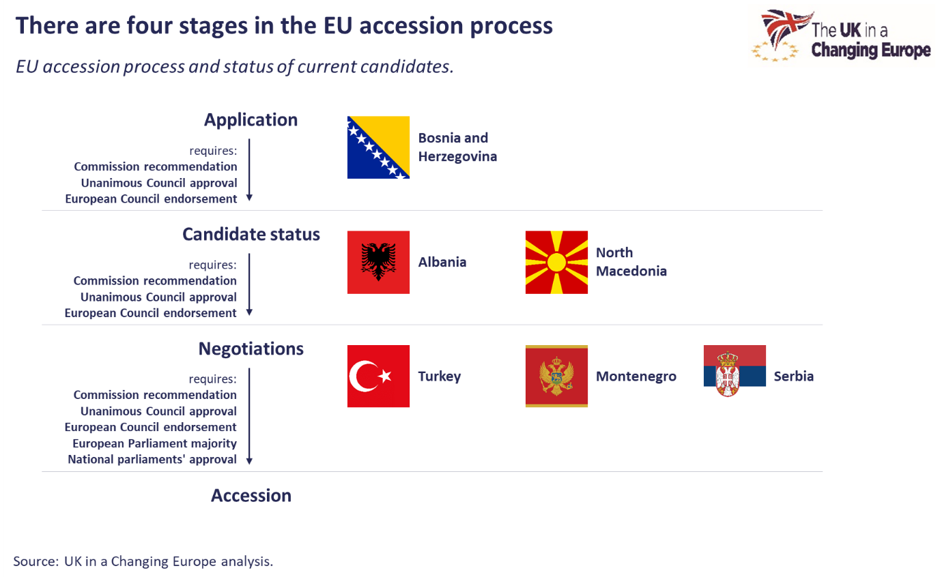 Do new members have to join the euro?

Apart from Denmark, which has a permanent opt out, all current EU member states are expected to join the euro – although this depends on meeting certain economic criteria and there is no set timetable in which they have to do so. Countries can, therefore, join the EU before joining the euro. For instance, six of the 13 countries that have joined the EU since 2004 have still yet to join the single currency.

There are four criteria that member states have to meet to do so: keeping inflation low and stable, ensuring public debt and the deficit are within EU rules, keeping interest rates low and tying the national currency to the euro for at least two years without serious issues, such as needing to devalue.

Politically, there would be substantial pressure on new member states to join the euro, not least as they would have joined the EU knowing eurozone membership was an expectation. Having said that, once countries have become EU member states there is no mechanism to force them to join the euro nor to sanction them if they fail to do so.

By Matt Bevington, researcher at The UK in a Changing Europe. Charts by Aron Cheung.