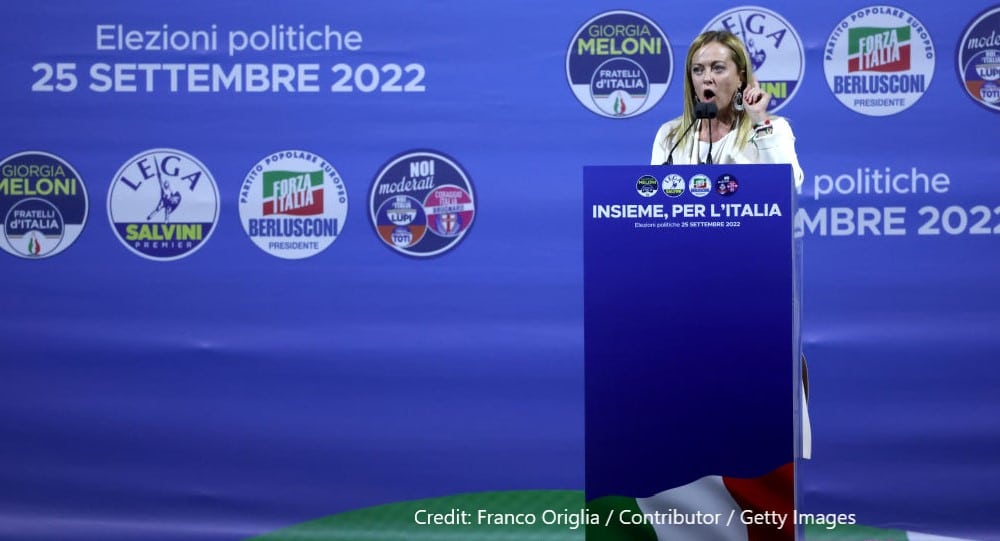 The Italian general election takes place on Sunday 25 September to decide the next government and Prime Minister.

This article explains how the vote works, who the main parties are, who might win, and what it all means for Italy, the EU and Ukraine.

What are Italians voting for?

Italians will elect new members to both its houses of parliament: the Chamber of Deputies and the Senate. These houses perform almost exactly the same role – amending and approving legislation – and a parliamentary bill only becomes law once both houses have approved the same text.

“Following the vote, if no party wins an outright majority, the parties and the President enter consultations to try and agree a new government and Prime Minister.”

How is the government formed?

Following the vote, if no party wins an outright majority, the parties and the President enter consultations to try and agree a new government and Prime Minister. This can take days or months, depending on the clarity of the result.

Once concluded, the President appoints a new Prime Minister (known as the President of the Council of Ministers) and the ministers (who need not to parliamentarians) proposed by that Prime Minister. That government must then be approved by a vote of confidence in both houses of parliament. 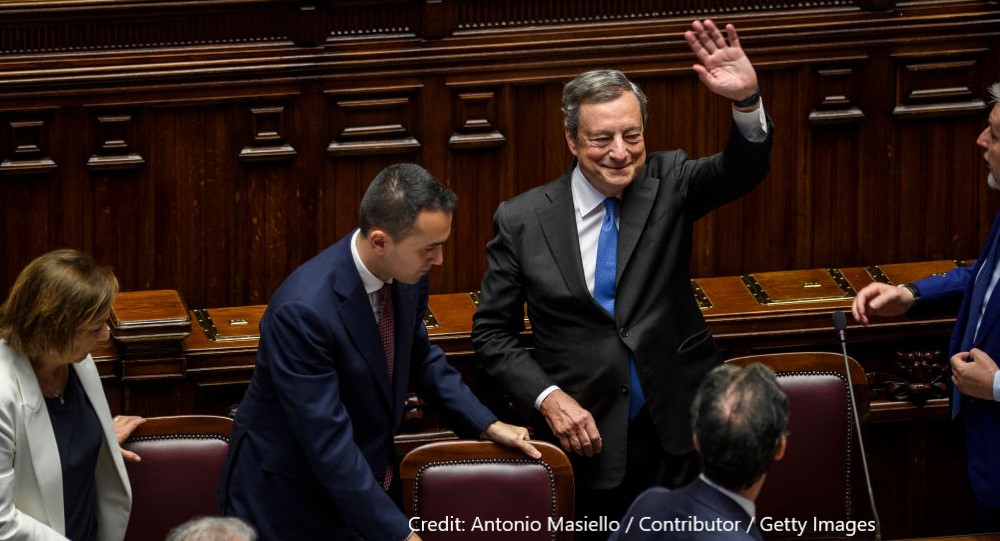 If no agreement can be reached, the President can call a new round of elections or may appoint a technocratic Prime Minister who is not from any of the negotiating parties but can command their support. This is what happened with the last two Prime Ministers, Giuseppe Conte and Mario Draghi.

The President is Italy’s head of state and commander in chief of the armed forces. They have the power to dissolve parliaments, appoint new governments and give official force to laws. They are elected every seven years by a combination of parliament and regional delegates.

How does the voting system work?

For both the Chamber of Deputies and Senate, three-eighths of the seats are decided by a first-past-the-post vote within single-member constituencies, meaning the candidate who receives the most votes is elected. The remaining five-eighths are divided up proportionally between parties which received at least 3% of the vote and coalitions which achieved at least 10%.

“The far-right Brothers of Italy are leading the polls and have dominated much of the election coverage.”

Seats are allocated using regional, pre-agreed party candidate lists. Linguistic minority parties are exempt from the thresholds and party lists must alternate between men and women.

Voters get one ballot for the Chamber and another for the Senate. On each ballot they may only choose one party, which applies to both the constituency and party list elements of the vote.

Why is the election being held?

A former President of the European Central Bank, Draghi was asked by the Italian President to form a government of national unity in February 2021, supported by an unusually broad coalition of parties spanning from the centre-left Democratic Party to the right-wing populist League; alongside the more anti-establishment Five Star Movement (5S) and the conservative Forza Italia. 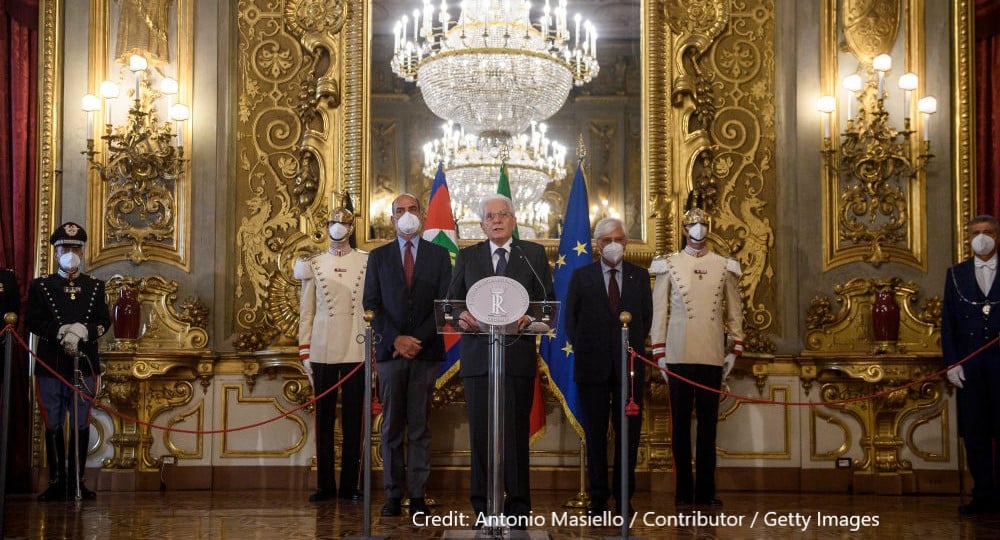 Draghi’s government managed the Italian economy through the fallout from the Covid-19 pandemic, supported by almost €200 billion in EU recovery funds. However, 5S withdrew its support for Draghi’s government over an economic support package which it deemed insufficient.

Draghi said he would not govern without the support of 5S – which won the most votes at the previous parliamentary elections – and offered his resignation despite winning a confidence vote after 5S, Forza Italia and the League boycotted it.

Luigi Scazzieri from the Centre of European Reform argues that while the economic package was the ostensible reason for the loss of support, both 5S and the League were concerned that their association with Draghi was driving their steady decline in support after he took power.

Who are the main parties/blocs?

The far-right Brothers of Italy are leading the polls and have dominated much of the election coverage. The party only polled 4% at the last general election but has benefited from being the largest party not to join Draghi’s government – making it the prominent party of opposition.

The party’s founder and leader Georgia Meloni says she has ‘taken up the baton of a 70-year-long history’ going back to Benito Mussolini but is not a fascist – though her party’s logo contains fascist iconography.  Meloni has condemned LGBT rights groups, called for a naval blockade against migration from North Africa, and advocated an ‘Italians first’ system for accessing social benefits. She also wants ‘less Europe’, including renegotiating the EU’s Covid recovery plan, but supports NATO membership and EU sanctions against Russia.

Brothers of Italy have formed an electoral alliance with the other two parties on the right – Matteo Salvini’s League and Silvio Berlusconi’s Forza Italia. The coalition’s central focus is energy costs and it is promising tax cuts and a reduction in VAT on energy.

The biggest challenger to Meloni is the centre-left Democratic Party led by former Prime Minister Enrico Letta. His party advocates increased investment in renewable energy and subsidised renewable energy for lower-income households, as well as income tax cuts for lower earners and a new minimum wage of €9 per hour. They also want to simplify the citizenship application process for children of immigrants and harsher penalties for anti-LGBTQ+ discrimination.

It has formed an electoral alliance with a number of smaller left, green and centre parties, but a formal centre-left alliance collapsed in August after the centrist party Action withdrew its support over the presence of more radical left-wing parties. Action has instead formed an alliance with Italy Alive, another centrist party led by former Prime Minister Matteo Renzi, supporting a continuation of Draghi’s pro-EU agenda – even intimating they might try to coax him back into office.

“Regardless of who wins power, the central political question is how to deal with the cost-of-living crisis driven by rising energy bills.”

The other major party in the race is 5S, which came first in the last general election. The Party is led by Giuseppe Conte, who served as a technocratic Prime Minister from 2018 to 2021 but subsequently became 5S leader. 5S began as an anti-establishment party and has previously shared power with the League, but under Conte its agenda has aligned increasingly with the PD, sharing its proposals for a €9 minimum wage and an easier citizenship process for children of immigrants. The party also advocates mutualising EU debt to generate an energy recovery fund. It is not part of any alliance.

What do the polls say?

The right-wing alliance is well ahead in the polls, with Brothers of Italy leading on around 24% (making its leader Meloni the likely next Prime Minister), while the League is on about 13% and Forza Italia is at roughly 7%.

Yet this leaves them still slightly short of an overall majority, meaning they will probably need at least the tacit support of another party or bloc in order to govern effectively.

Nonetheless, the leader of the left bloc Enrico Letta last week admitted defeat, instead calling on voters to ensure the right bloc does not achieve a landslide which would allow it to pursue the more radical elements of its agenda.

Meloni wants the Italian Presidency to become an elected office, but such constitutional changes require a two thirds parliamentary majority.

What are the big issues for the next government?

Regardless of who wins power, the central political question is how to deal with the cost-of-living crisis driven by rising energy bills. While the next government will very likely be Meloni-led, there remains uncertainty over how exactly it will deliver on this.

Meloni –  perhaps keen to present herself as a serious head of state and reassure investors hedging against Italian bonds – does not want to significantly deviate from Draghi’s policy of maintaining a stable debt-to-GDP ratio. However, Salvini wants to see additional borrowing worth around 2% of GDP and, whereas Meloni supports EU sanctions against Russia, Salvini (who has historically praised Putin) argues they are harming Italy economically.

Beyond the policy tension there is also a potential clash of personalities, as Salvini has long been the most prominent politician of the populist right in Italy and may not be entirely content as the junior partner in a coalition with Meloni.

The fact he has campaigned with the logo ‘Salvini premier’ hints at this tension, and Salvini may try and augment disagreements with Meloni over issues like debt and Ukraine to rehabilitate his own falling popularity.

What will it mean for the EU?

The right-wing coalition members have toned down their historical euroscepticism, pledging ‘full adhesion’ to European integration and the euro. But there are questions as to how much of this is electoral posturing, especially as it sits alongside a vision of ‘a more political and less bureaucratic EU’ where member states manage ‘the issues closest to the lives of citizens’.

This could mean a range of things, but the Brothers of Italy have previously called for the supremacy of the Italian constitution over EU law and an ‘Italians first’ system for accessing social benefits which would run contra to EU rules. Such an open affront to the principles of membership would see Italy ostracised from the EU core. 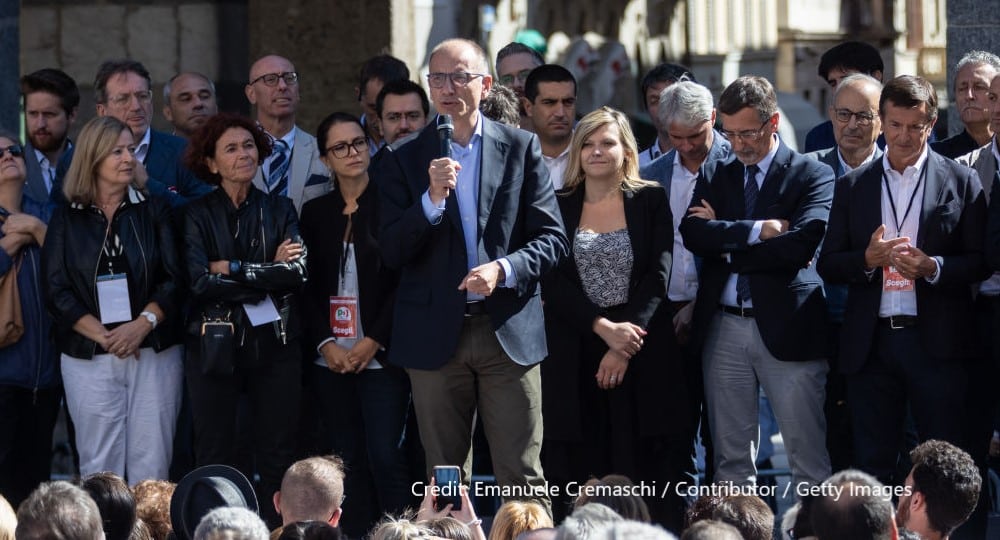 Italy is unlikely to go as far as Poland or Hungary in pushing policies which defy EU standards on the rule of law and civil rights. But it could well end up in the bloc of member states which are softer on such issues and less willing to see Poland or Hungary punished – weakening the EU’s position in ongoing disputes.

Overall, Italy is likely to be relatively careful about which fights it picks with the EU, because EU Covid recovery funds are central to the Italian economic recovery. Tensions could instead arise over the right-wing coalition’s promise to renegotiate the conditions attached to Italy’s recovery funds – to free up more funds for energy diversification and to subsidise Italians’ energy costs. The EU has hinted that it would not accept this, though it might let the agreement be ‘modified’ to help with transitioning away from Russian gas.

“Italy is likely to be relatively careful about which fights it picks with the EU, because EU Covid recovery funds are central to the Italian economic recovery.”

This tension could be exacerbated if Italy fails to pursue the judicial and administrative reforms instigated by Draghi, as the continued disbursement of funds is conditional upon their implementation. Meanwhile any attempt to leverage more debt to fund energy support measures (as advocated by Salvini) would unsettle the European Central Bank, which is the guarantor of Italian debt and appreciated Draghi’s more cautious approach to fiscal management.

Draghi was widely seen to have brought stability to the EU through this close cooperation with Germany, France and the EU institutions. European leaders are thus likely to view a more confrontational Italian government as an unwelcome change.

What will it mean for the war in Ukraine?

The right-wing coalition is seen as less likely to break with EU convention on Ukraine, with Meloni supporting the sanctions against Russia and NATO membership.

One factor which could change the situation is if the Italian economic situation worsens, and Salvini in particular argues that prolonged sanctions against Russia are a root cause. Such arguments could find support from an Italian public which – by EU standards – is relatively ambivalent towards Russia and a parliament where important groups such as 5S oppose sending weapons to Ukraine.