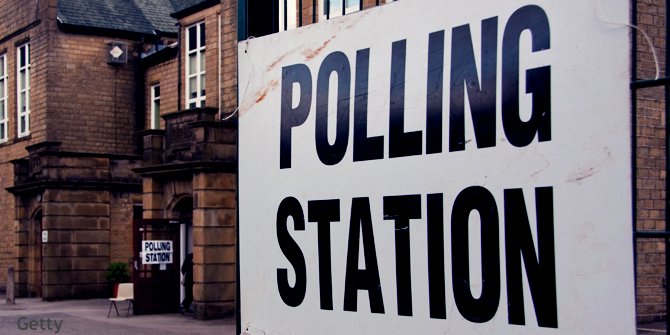 It goes without saying that local elections provide an imperfect snapshot of national politics. Yet they can point to key trends in the way voter behaviour is changing.

Take a look back through the last decade and some of the key shifts in British politics. The rise of UKIP in northern England. Disappointing results for Ed Miliband’s Labour Party. The collapse of the Lib Dems between 2010 and 2015. The brief collapse of the two largest parties in 2019. All these were political trends borne out in local election results.

Due to the last year’s elections being postponed because of the pandemic, this year will be an unusually large tranche of contests, and will also provide the first electoral test since the last general election – and therefore the first big electoral test for new party leaders of Labour and the Liberal Democrats.

We have chosen the following five ‘contests to watch’ as the results are announced this week. Each of these five results will help us understand a different question around England’s changing electoral geography.

We pick out different areas where Labour and the Conservatives are looking to grow support, and also areas where they could lose ground to the Liberal Democrats and the Greens in particular.

Their placement on this political compass shows the values of the average voter in these places each sit on a different place on the political spectrum. We have the City of Bristol, relatively liberal-left in its values. Hertfordshire, more socially liberal and economically right-wing than the national average. Doncaster, which has an opposite make-up of left-wing authoritarian voters. And then there are places that sit (roughly) in the middle like Derbyshire and Cornwall, but with very different histories in terms of which parties they tend to back. 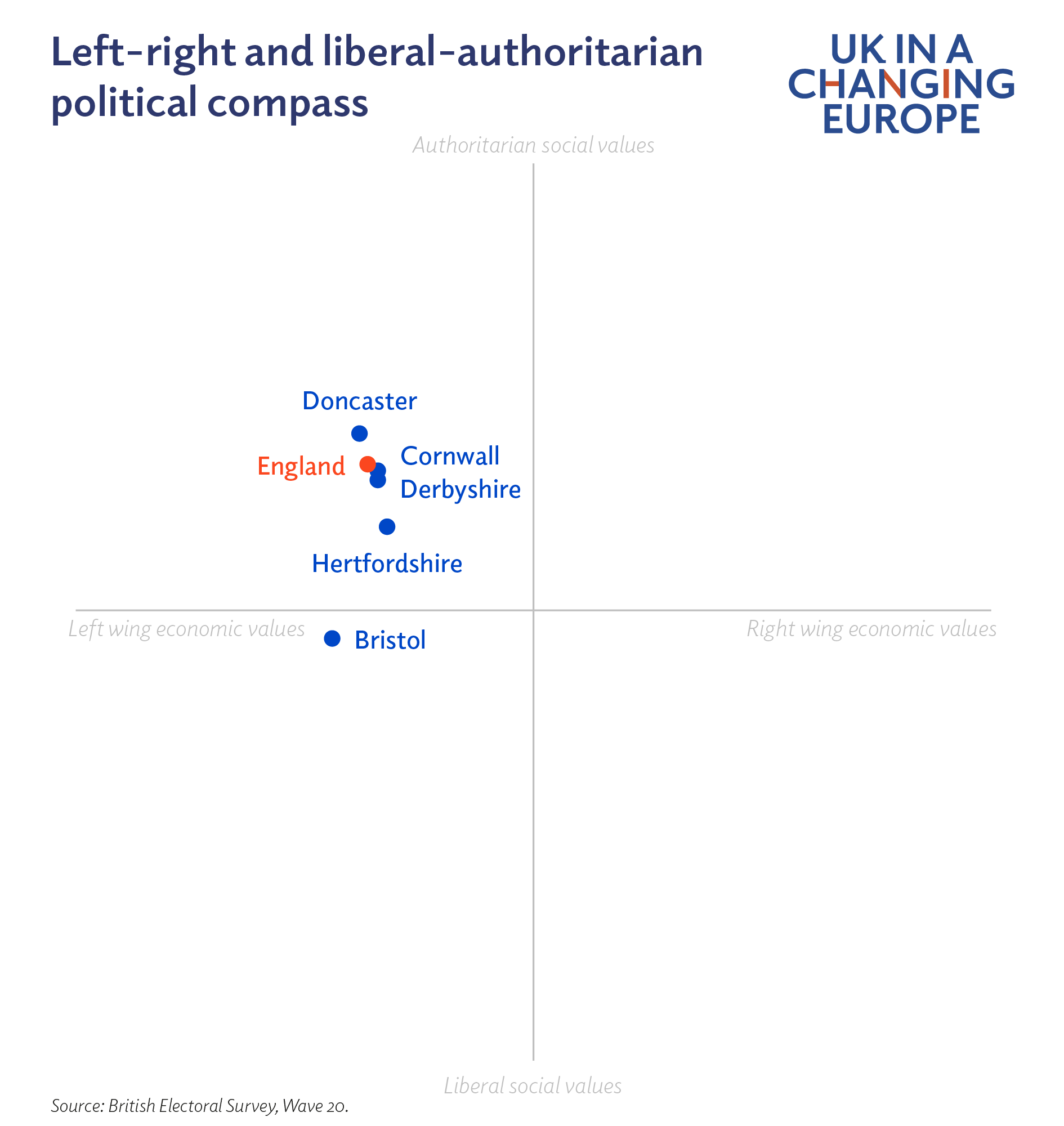 Here, we will take you through the electoral history of each of these parts of England, and what clues these contests will give those seeking to understand how British politics is changing in light of Brexit and Covid-19.

Are Labour winning back any voters from the Conservatives? 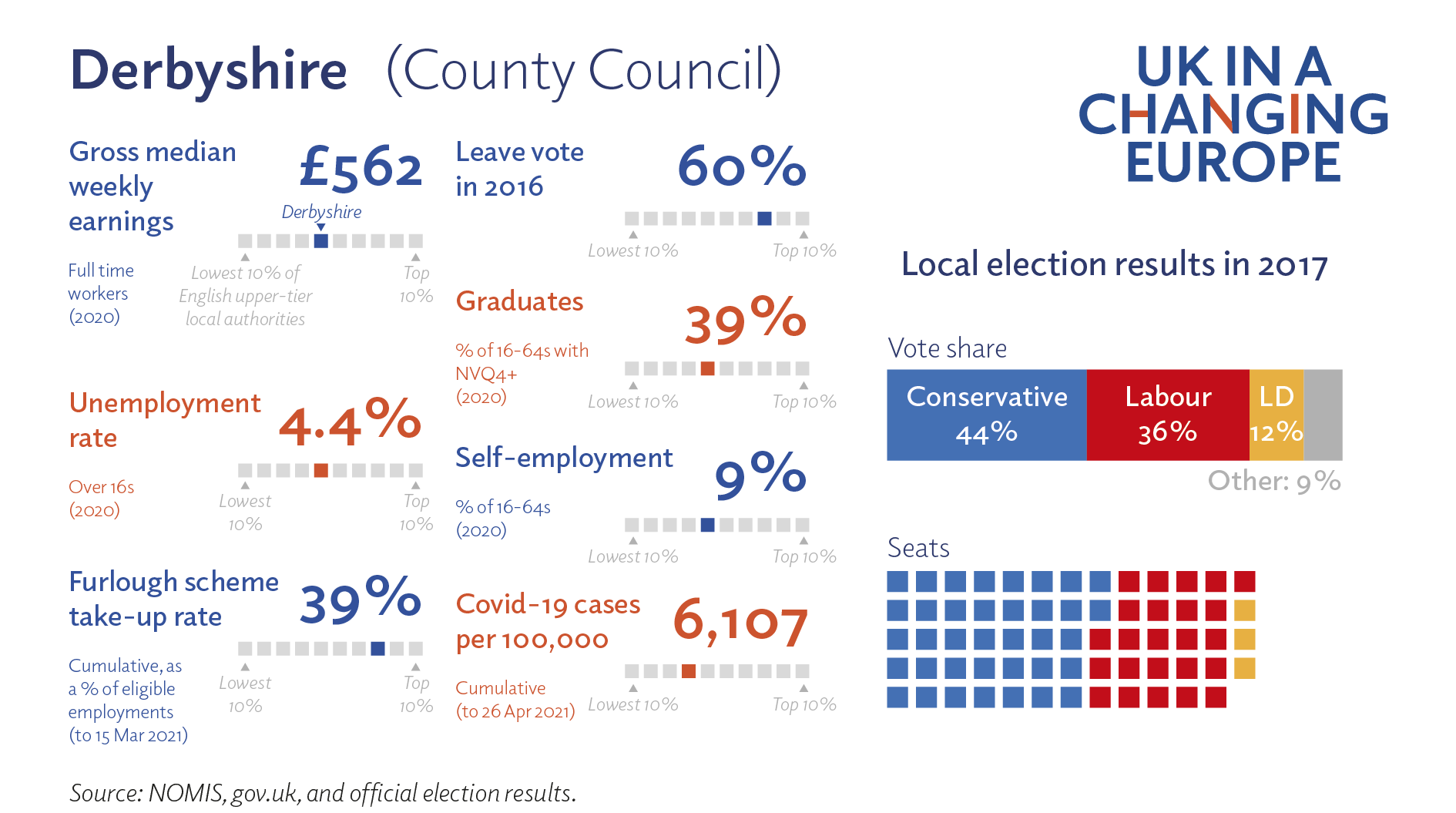 The council encompasses a range of Conservative-Labour contests, from Bolsover – the constituency that has seen Labour’s vote share drop from 65 per cent in 2005 to 36 per cent in 2019 – to ultra-marginals like High Peak which trended towards the Labour Party under Jeremy Corbyn.

As a result, looking at the granular map of Derbyshire’s results after Thursday will be another tool to help us understand how the parties are faring in places like Chesterfield – where Labour clung on with a 1,000 vote majority, despite an 8 per cent swing to the Conservatives in 2019.

Across a range of metrics, Derbyshire sits near the England average: not just in terms of the average social and economic values of its voters but also in the health and economic impacts of Covid-19.

All this means that – in a set of complicated and fragmented elections where each party is likely to be able to claim victory – Derbyshire has been identified by the political scientists Colin Rallings and Michael Thrasher as perhaps the nearest we have may have to a ‘bellwether’ to understand the situation in England. 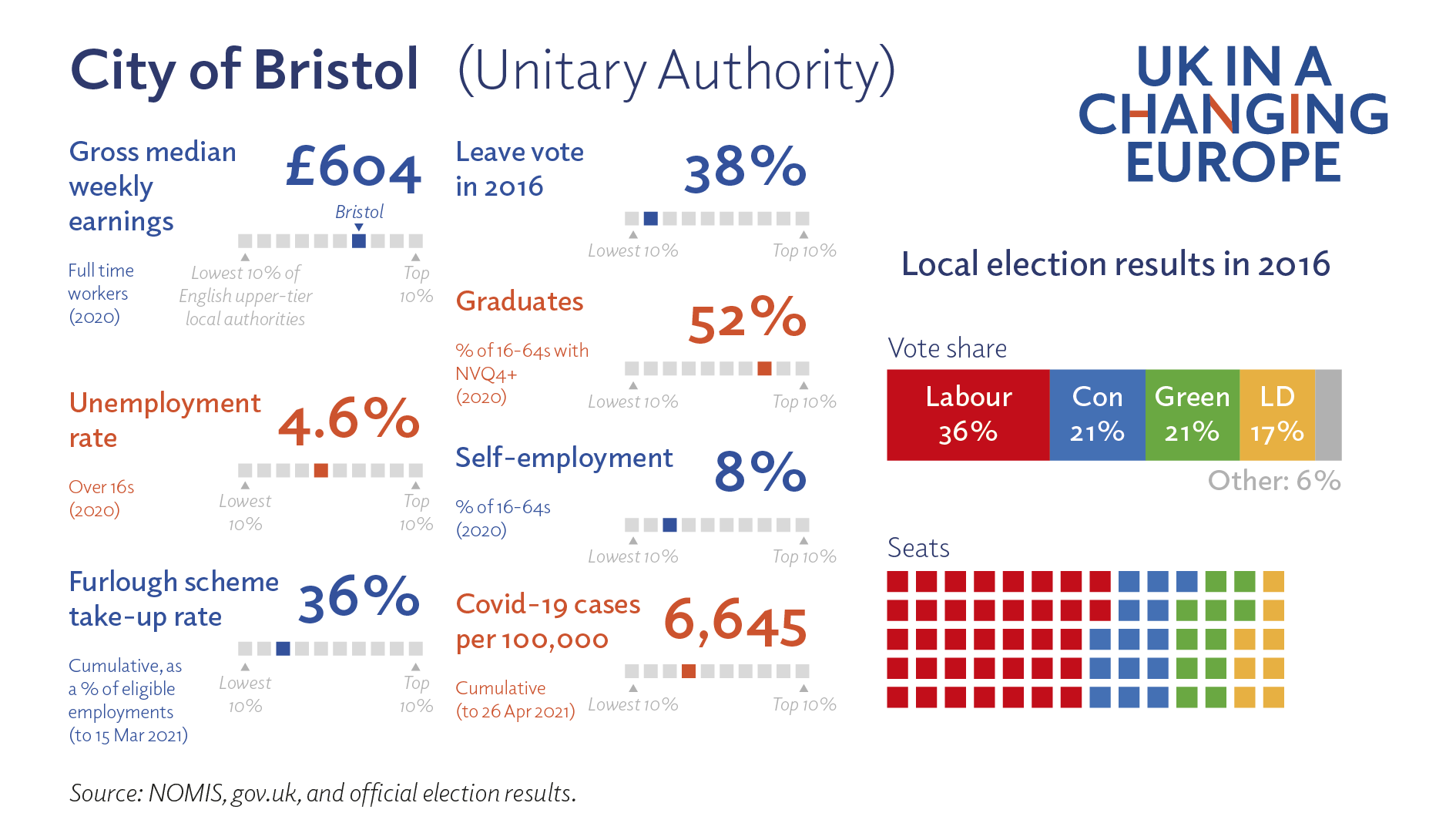 On the final night of the 2010 general election campaign, David Cameron held his closing rally in Bristol. A year earlier, Labour had fallen into third place in the city council –below the Conservatives and the Liberal Democrats. And, by the following evening, Labour only held half the city’s parliamentary constituencies.

Since then, Bristol has steadily – and then, from 2016, increasingly quickly –  returned to being an area of Labour strength. So much so that the city now provides a test for whether Keir Starmer can hold together places where Jeremy Corbyn’s electoral coalition succeeded, while expanding Labour’s support elsewhere. Or, as the political journalist Stephen Bush put it, whether Labour can ‘keep its back door locked, preventing a resurgence for the Liberal Democrats and ending the recent trend of Green gains.’

Bristol provides a useful test of this for three reasons.

The local authority area skewed heavily Remain and has not just a strong student constituency, but a large graduate population too. It is also, as the political compass shows above, significantly more liberal than the English national average. All these factors make it ripe for a challenge on Labour’s defensive flank.

And, given there will be an opportunity to vote for two mayors (the city mayor and the West of England metro mayor) as well as council wards, this should be an area of (relatively) high turnout – though there are some uncertainties around the status of the city’s large student population.

There are also symbolic reasons why Bristol is important.  The city has been at the centre of debates around the ‘Kill the Bill’ protests and the removal of the Colston statue, which have seen the directly elected Labour mayor, Marvin Rees, rise to national prominence. Losses here could be seen as a signal that Labour’s moderated positioning on these issues has caused real damage among a group of voters with other options at the ballot box.

How safe are ‘affluent remain’ areas for the Conservatives? 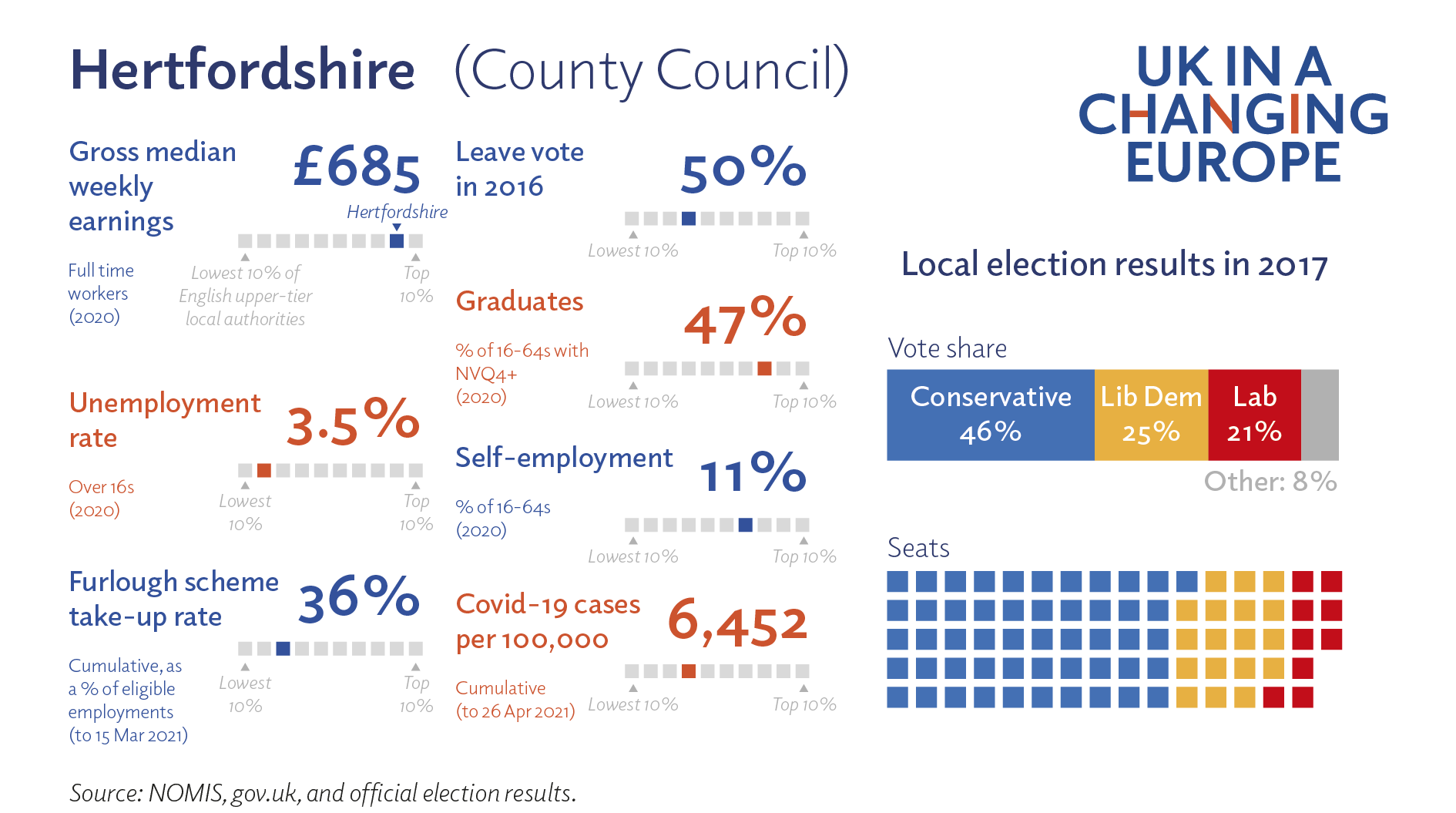 Hertfordshire is a classic part of ‘affluent Remainia’: pro-Remain, relatively affluent areas which Boris Johnson successfully defended in December 2019 while succeeding in different parts of the country. Yet these types of areas are where Boris Johnson’s Conservatives are most vulnerable.

Hertfordshire council itself is unlikely to move from the Conservatives to ‘no overall control’, unless things go fairly badly for Boris Johnson nationally. Yet there is a genuine three-way scrap for influence. When last fought in 2017, Labour and the Liberal Democrats were within a 10 per cent swing of the Conservatives in 16 of the county’s 78 wards. Losses in nearly all of these would tip the balance.

Hertfordshire saw swings of this size away from the Conservatives in December 2019: a 15 per cent swing to the Liberal Democrats in Hitchin and Harpenden, and even a lesser-spotted Liberal Democrat gain in St Albans, on a 10 per cent swing. This was born, in part, from Lib Dem success in council elections that saw them consolidate their position as the main vehicle for anti-Conservative voters in the town.

Yet Labour remains the main opposition in eight of Hertfordshire’s ten Westminster constituencies held by the Conservatives, and will also be looking to make gains given Keir Starmer’s success to date in pulling votes away from the Liberal Democrats in national polling.

Both Labour and the Lib Dems know that they need to grow their appeal in places like Hertfordshire if they are to make gains at the next general election, and the Conservatives will be keen to consolidate their support from 2019. Constituencies like Watford and Stevenage are constituencies Labour will focus on at the next election.

Even if it is likely to remain a Conservative council, all three parties will be paying close attention for signs of any cracks in what some are calling the ‘blue wall’ this week.

How far does the ‘red wall’ have to fall? 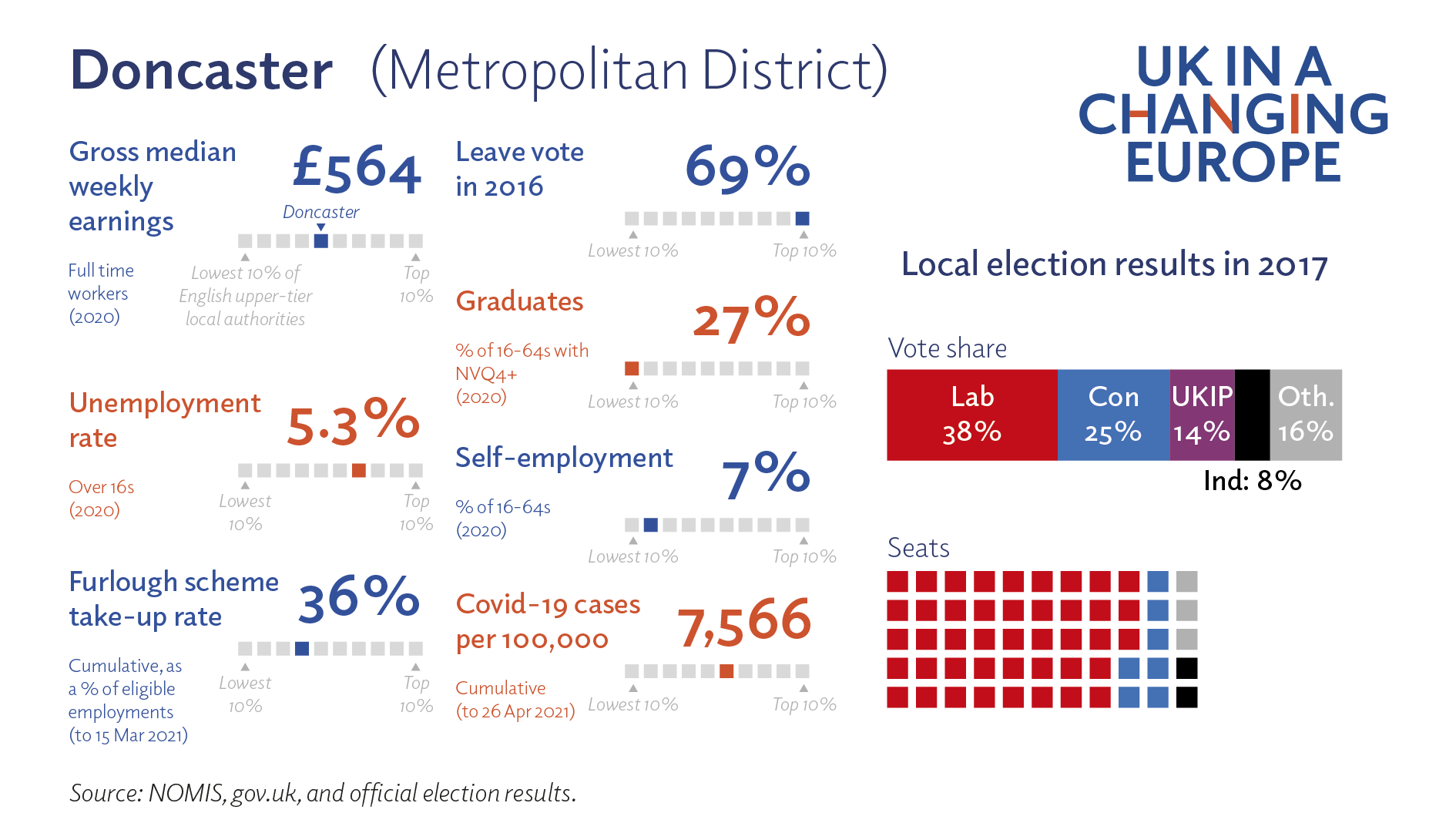 At first glance, the Doncaster metropolitan council does not appear to be a particularly close contest: 42 of the 55 seats are Labour held, and the Conservative Party would have to make over twenty gains from a standing start of seven seats to gain overall control.

Yet, the politics of Doncaster are more complicated, and more interesting, than that. The town was highlighted as a key part of the ‘red wall’ by the political strategist and pollster James Kangasooriam when he first coined the term in August 2019.

This proved prescient as, in December 2019, Don Valley – which incorporates the south of the borough as well as surrounding villages – went to the Conservatives for the first time since its creation. Both Doncaster North and Doncaster Central were two of the 14 seats where a split Leave vote helped Labour MPs Rosie Winterton and Ed Miliband hold on by fewer than 2,000 and 3,000 votes respectively.

In short, Doncaster is one of the places the Conservatives will be looking to make significant gains on Thursday. There are some obvious reasons why: the metropolitan borough is in the top decile in terms of Leave vote, and the lowest decile by graduates. There is also a significant UKIP vote of 14 per cent to squeeze, and which is likely to fall disproportionately (but certainly not exclusively) to the Conservatives.

Can the Liberal Democrats revive in their old ‘heartlands’? 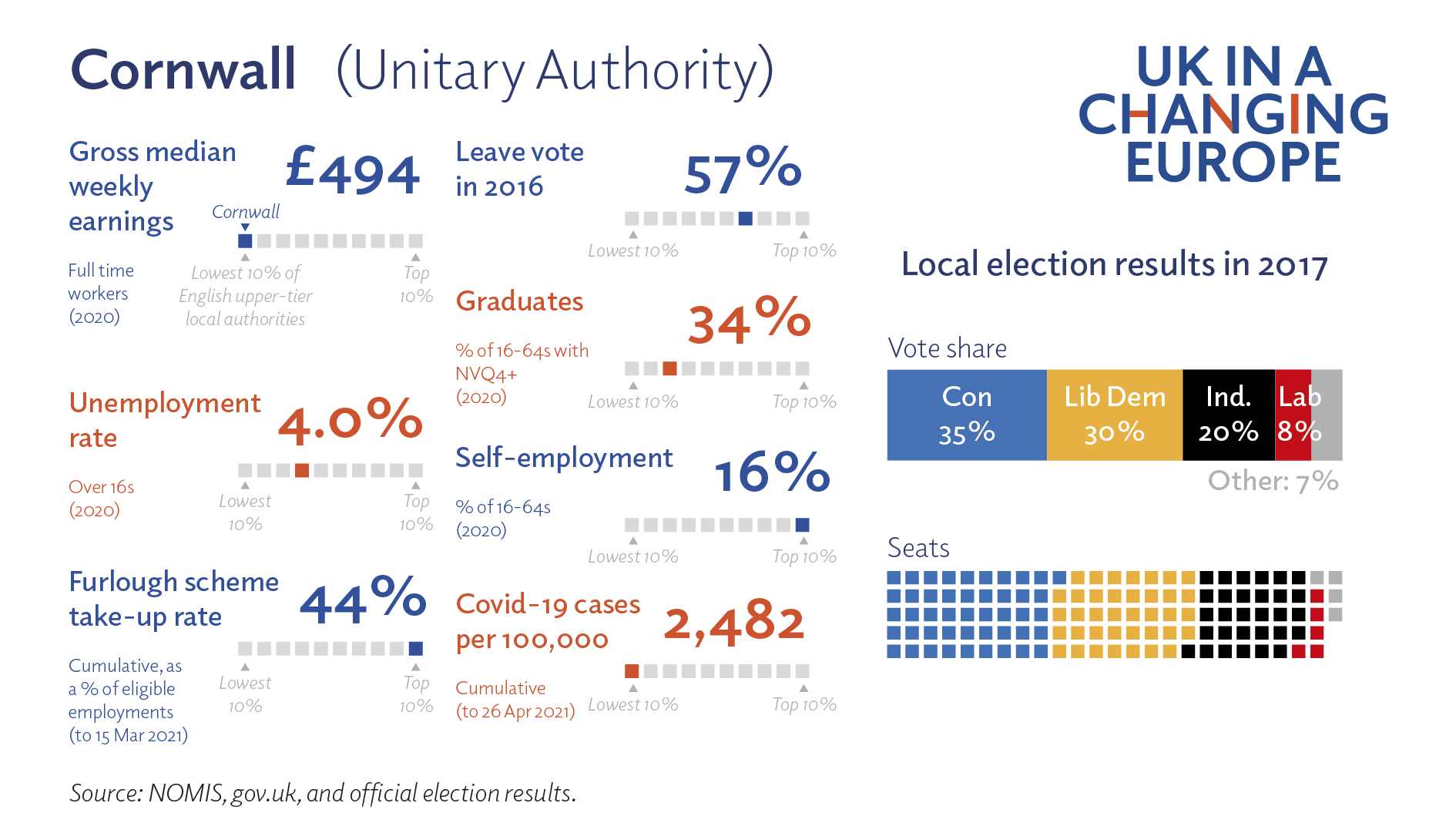 After the 2005 general election, every voter in Cornwall was represented by a Liberal Democrat. Following the 2010 general election, the county’s constituencies were split evenly by both coalition partners – a surge in Conservative support pre-empted by significant gains in the 2009 county council elections. This ‘orange wall’ creaked in 2010 and collapsed in 2015, and in every general election since this county of historic Liberal strength has been solidly Conservative blue.

This trend is representative of the South West more broadly. In 2010, the Liberal Democrats won 15 out of the 55 Westminster seats in the region, and were competitive in a further 27 seats. Now, the party only holds one seat and is competitive – within a 10 per cent swing – in a further five seats, including the Cornwall seat of St Ives.

Yet, despite all that, the party has remained competitive locally – in the 2017 local elections they retained their second position with a relatively strong showing, but were not able to advance amidst the strong national Conservative performance in May 2017. A significant tranche of independents on Cornwall county council – the kind of independence among the electorate long seen as key to the Liberal Party’s strength – further complicates the picture.

The challenge for the Liberal Democrats is that voters have further sorted into Brexit tribes in recent years, making it possible to envisage further Conservative gains on 2017. Yet, the fishing industry – an important part of Cornish identity as well as the local economy – was broadly seen to have been let down by Boris Johnson’s Trade and Co-operation Agreement. The result will tell us whether the Conservatives will pay an electoral price for that.

These elections in Cornwall are, therefore, a crucial test of whether the party – which is also courting remain-supporting graduates in the south east as part of its comeback drive – is able to at the same time regain some of its ‘legacy vote’ in a leave-voting county with a lower number of graduates than the national average. To do so it must be seen as a viable vehicle for anti-Conservative votes.

And, will the government see a boost in a county which has in theory felt more of the positive effects of the pandemic response, with one of the highest take-ups of the furlough scheme, as well as one of the lowest death rates for Covid-19?

By Aron Cheung, Joël Reland, Paula Surridge and Alan Wager, the UK in a Changing Europe

Article 16 of the Northern Ireland Protocol